These air fryer tempeh nuggets are smoky and savory little flavor bombs! Crispy and satisfying, they add vegan protein to any salad or bowl, as well as to pasta dishes and soups. I like to snack on them, too. I’ve included an oven cooking option for those who don’t have an air fryer at home.

I spend a lot of time wondering how I could put my air fryer to more use.

The things I use the air fryer for, I really use it for. Primarily, I use it to reheat leftover pizza and to make sweet potato fries or home fries to eat with tofu scramble.

Pizza leftovers and savory breakfasts are big in my home, so the air fryer has more than been worthwhile.

However, I don’t often branch out with my air fryer. I can’t attribute this to laziness, because making things in the oven is actually more time-consuming. And I don’t suffer from a lack of inspiration, because I bookmark many air fryer recipes for weekend reading!

I think I’m just overly deliberate sometimes, which makes it difficult for me to try new things, start new things, and so on.

Lately, however, I’ve been determined to do more with my air fryer, and these air fryer tempeh nuggets are the fortuitous result.

What are tempeh nuggets?

I’m calling these tempeh nuggets because they’re crispy at the edges, savory, and dense in texture. That density seems to evoke the idea of a “nugget.”

You’ll probably want to add them to salads and bowls and tacos and such. But it’s also very likely that you’ll want to pop a few into your mouth as they cool, snack on them, grab a few whenever a plant protein craving strikes.

In this sense, they’re not unlike chicken nuggets. You can serve them with things or on top of things, but they’re fun to eat just as they are, too.

How to make tempeh nuggets in the air fryer

Use of the air fryer does two things in this recipe.

First, it makes cooking time quick. On average, anything that I air fry takes me at least a few minutes less than an equal amount of time in the oven.

Second, air fryer gives everything undeniable crispiness. And it does that without the need for too much oil, as well.

The recipe really is divided into two parts. The first is seasoning the tempeh nuggets, the second is air frying them.

I season the tempeh nuggets here with a technique that I’ve used in other recipes. Essentially, I simmer the tempeh in broth prior to cooking.

Many cooks recommend steaming tempeh prior to cooking, so that it loses some of its naturally bitter flavor. I never used to do this, but once I started, I could understand the advice.

Tempeh that’s been steamed prior to marinating or cooking does taste less bitter to me. I also think that it absorbs flavors more readily than tempeh that hasn’t been steamed.

The problem is that steaming tempeh is just another step. And lately, I seize any and all opportunities to streamline, rather than complicate, my cooking.

What I’ve found is that simmering the tempeh in broth (and any other seasonings you like) does a number of things at once. It decreases tempeh’s bitterness, seasons it, and helps it to absorb those seasonings and flavors, all at the same time.

I use this method for my chili lime tempeh tacos and the tempeh meatballs that I love so much.

And I use it for these air fryer tempeh nuggets. Before going into the air fryer, the tempeh nuggets simmer in a mixture of broth, tamari or soy sauce, paprika, mustard, onion and garlic powder.

One thing worth saying is that the simmering liquid would taste very overly seasoned if you tried it as it is. That’s completely intentional.

Think of it as you would the salted water for boiling pasta, which is always purposefully salty. This is because the pasta itself won’t absorb salt at any other point in cooking.

Similarly, this simmer time is the only chance you’ll have to season the tempeh nuggets. They’ll absorb some of the simmering liquid, but some will be drained.

The liquid needs to be doubly strong in flavor so that the finished nuggets are well-seasoned.

After 10 minutes of simmering, you’ll drain the tempeh. And you’ll give it a tiny coat of oil before it goes into the air fryer.

The oil helps the tempeh cubes to become crispy without becoming dry.

You can coat them lightly by returning them to the pot, adding a teaspoon of oil, and stirring them gently to distribute it.

You can also add them to the basket of your air fryer and then use an oil spray (I like to use avocado oil) to coat them lightly.

Next, you’ll air fry the nuggets for 8-10 minutes at 400F. Midway through this cooking time, pause the air fryer and either gently shake the basket to stir the cubes, or (if your air fryer is more like a toaster oven), flip them on their tray.

At this point, you’ll have perfectly browned, savory, and very irresistable little nuggets of plant goodness.

While I created this recipe for my air fryer, you can make it in the oven, too!

To do this, simply preheat your oven to 400°F (200°). Lightly rub or spray a baking sheet with oil, or use a nonstick baking sheet.

Bake the tempeh cubes for 15-20 minutes, or until crispy and browning. Flip the cubes on the sheet once, halfway through baking, so that they brown evenly.

Which air fryer do you recommend?

I have the compact Phillips Essential Digital Air Fryer. I’ve been really happy with it, and the size has worked for me so far with my limited storage and counter space.

I’ve definitely thought about investing in an air fryer that’s also a smart oven/toaster oven. Right now, it probably won’t work with my space, but if I do decide to go that route, I’ll update this post.

In the meantime, my basket-style Phillips has been a win: easy to clean, efficient, fast, nice interface. I think there are probably more economical and budget-friendly models that work similarly, but I do recommend it.

What to do with tempeh nuggets

Once prepared, there are so many fun things you can do with these scrumptious nuggets.

This week, I have plans to use them in the Power Plates sweet potato salad with tempeh and maple mustard dressing.

I also have tortillas in my fridge, so I might use them as a protein in breakfast tacos with homemade refried beans.

The nuggets will of course work well in grain bowls. I’ve also always liked to use tempeh cubes as protein-rich “croutons” in vegan soups and stews. They work especially well with split pea soup and chowder.

Another idea is to add the nuggets to pasta, in order to make a simple pasta meal richer in vegan protein. Some pastas that the nuggets could work well in/on:

The nuggets are also delicious to simply snack on, or to have alongside other components in a lunch or dinner! I could imagine them working really well in kids’ lunch boxes (or grown-up kids’ meal prep lunches for the week).

The tempeh nuggets can easily be incorporated into your weekly meal prep routine. They’ll keep for up to five days in an airtight container in the fridge once cooked.

You can also freeze the tempeh nuggets for up to 8 weeks.

The only downside is that the nuggets will lose some of their crispy texture as you store them. Accordingly, you can reheat them in the air fryer (3-5 minutes at 350°F should do it).

Or, you can enjoy them cold, without letting the changed texture get to you. To be honest, I’ve been doing that all week, and I haven’t enjoyed the nuggets any less. 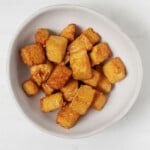 Prepare the the tempeh

This post has me thinking about other, easy air fryer recipes to come. Roasted veggies for winter, of course, but also simple proteins like this one. I’ve occasionally made my baked tempeh bacon in the air fryer, but there’s so much else to explore.

I’ll keep you posted on my experiments. In the meantime, happy Friday!