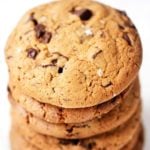 These perfectly soft, chewy vegan chocolate chip cookies were developed by the recipe pros at America’s Test Kitchen! Almond butter is the secret ingredient that gives them a toffee-like flavor. These are easy to make, freezer-friendly, and no one will know that they’re vegan!

My ideal chocolate chip cookie is super soft, but just a little crispy at the edges and on the bottom. It’s more fluffy than flat, and it’s sizeable: at least three tablespoons of dough per cookie. Sea salt is really important, because salted chocolate is a flavor I can’t get enough of.

America’s Test Kitchen is known for its rigorous recipe testing process. The company describes itself as being “passionate about cooking—discovering why recipes work and why they don’t—and sharing what we learn to help everyone cook with confidence.”

Needless to say, recipes on the site and in Cook’s Illustrated are always accompanied by plenty of detailed guidance. They don’t just tell you what to do, but also why each step is worth doing. The recipes are reliable because they’ve gone through so much experimentation on the way to your recipe box.

The making of a perfect vegan chocolate chip cookie

The authors of Vegan for Everybody have this to say about the process of developing the cookies:

When it came to developing a vegan version of the classic chocolate chip cookie, we’d settle for nothing less than perfection; the recipe had to produce a cookie that would be moist and chewy on the inside and crisp at the edges, with deep notes of toffee. We started by baking 11 popular recipes, and we were shocked at the assortment of hockey pucks in front of us. Some cookies didn’t spread at all, while others melted into greasy wafers; some tasted like cardboard, while others had funky off-flavors; and some were gelatinous, while others crumbled apart. We had our work cut out for us.

I liked reading about the steps that the team took to get the cookies they wanted:

Starting with the test kitchen’s classic recipe, we removed the egg and found that we simply didn’t need a substitute for it. While many cookie recipes call for a mix of white and brown sugars, we opted to use all brown; it gave the cookies a richer flavor and its moisture provided a softer center. But tasters wanted more chew. As it turned out, to achieve a chewier cookie, we had to leave it alone. Letting the mixed dough rest for 1 to 4 hours (no longer) gives the proteins and starches in the flour a jump start at breaking down; meanwhile, the sugar dissolves, hydrates, and later retains this moisture better during baking, preventing the cookie from becoming brittle. Lastly, the surprising addition of a little almond butter added the toffee-like richness that butter typically provides a cookie.

True to promise, these are chocolate chip cookies for chewy cookie lovers (and I’m one of those). They’re just crispy enough at the edges, and they hold their shape. But the interior of the cookie is all chewiness, in the best possible way.

The dough resting is a trick I’ve tried in other vegan chocolate chip cookie recipes before, and it really does make a difference. I opted for four hours—the longer end of the recipe’s suggested rest time—and was so happy with my results.

It’s fine to treat some recipes loosely, adding in a dash of this, substituting a dash of that.

This isn’t one of those recipes.

It’s generally best to follow baking recipes closely, and this is especially true when a recipe has been designed with very particular results in mind. Here’s some of the key ingredients that you’ll need for the America’s Test Kitchen vegan chocolate chip cookies.

I don’t recommend any substitute except for an all-purpose, gluten-free flour blend. If you follow a gluten-free diet, this is my tried-and-true for baking!

While some chocolate chip cookie recipes call for a mix of cane and brown sugar, this one calls for brown sugar only. Using all brown sugar makes the cookies much moister and more chewy than they would be otherwise.

Coconut oil is the substitute for traditional butter in the cookie recipe. For what it’s worth, I prefer vegan butter to coconut oil, and I’ve used both in this recipe. They both work well. I’ve also used refined avocado oil in place of coconut oil.

I reach for refined avocado as a go-to, neutral cooking oil because its saturated fat content is lower than that of coconut oil. But—you do you! I’ve listed coconut oil in the recipe card, because it’s what the recipe developers intended. Just making sure you know that you’ve got options.

Almond butter also helps to contribute moisture to these cookies. And it really does give the vegan chocolate chip cookies a toffee-like flavor, as the America’s Test Kitchen writers suggest.

One really important thing to note is that you have to use a smooth, non-oily almond butter for the recipe. Ultra-natural brands, which tend to be gritty and to separate into oils and solids, won’t work as intended.

I’ve tested the recipe with Justin’s almond butter and Barney Butter. I think Barney Butter works the best. Conveniently, it’s also my favorite brand of almond butter, the one I think is most palatable. But another smooth, non-separated almond butter of your choice should work, too.

I always use Diamond Crystal Kosher salt in the vegan chocolate chip cookies themselves. I also like to top them with Maldon, an addition that isn’t in the original recipe, but I think it makes the cookies even better!

Can I substitute peanut butter for the almond butter?

Yes, you can! Peanut butter works just as well. Be sure to use a creamy, smooth, non-separated peanut butter.

The only thing to keep in mind is that peanut butter will give the cookies a distinctive, peanut butter flavor. They’ll lose that toffee-like taste. If you like the way peanut butter and chocolate work together (and I definitely do!), that’s not a problem.

Is the resting time really necessary?

Yes, it truly is. That 1+ hour rest will help to strengthen the cookies, and it, too, will contribute to their chewy texture. I think overnight is even better than 1-4 hours, but I’ve never had bad results with the 1-4 hour rest time. Just optimal chewiness and moisture when I give them a little longer in the fridge.

I like to store the cookies in an airtight container at room temperature for 3-4 days. I think they retain their moisture best this way. If I want to keep them longer, I freeze them.

Yes, most definitely. I’ve frozen these cookies for up to six weeks at a time once cooked. You can also freeze the cookie dough for up to four weeks before thawing, scooping, and baking.

Nothing beats a good cookie, right? They’re rewarding enough to be dessert, but not so much of a commitment that they can’t be a quick, easy snack. Here are a few other of my favorite vegan cookie recipes: 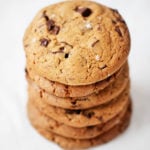 I hope these vegan chocolate chip cookies will brighten many snacks and desserts for you! I especially love to dunk them in a glass of non-dairy milk. If you make them, I’ll be eager to hear what you think.