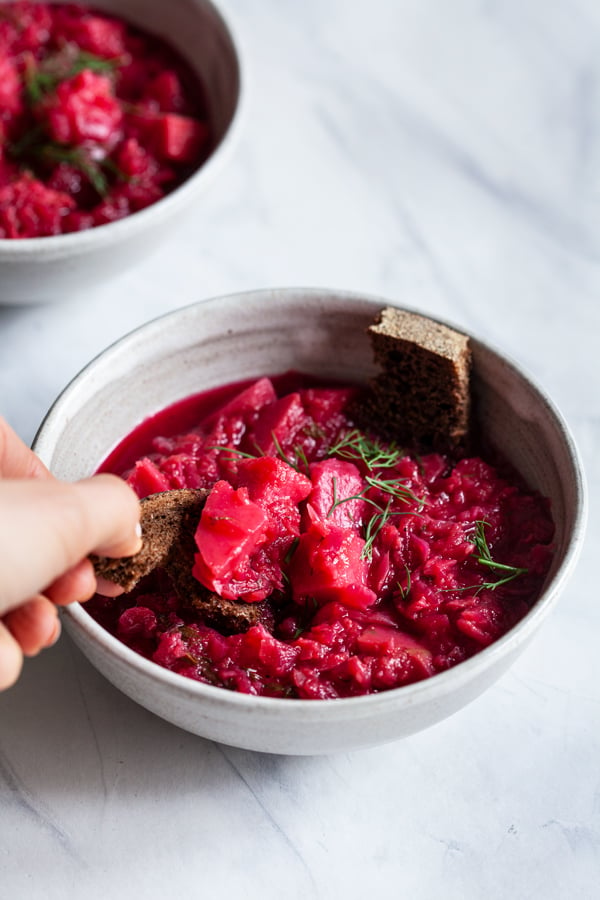 It seems a funny time for me to be making borscht, which is often thought of as a winter soup, but when I passed the farmer’s market last Saturday it was teeming with beets and cabbage. I picked up both before I knew what I’d do with them. 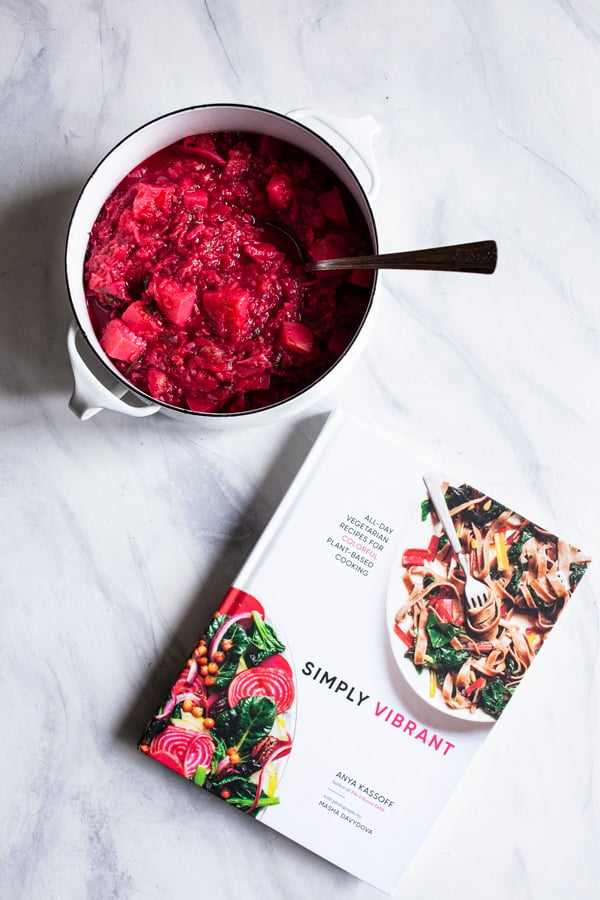 There’s a story at the start of Anya Kassoff’s beautiful new cookbook, Simply Vibrant. The main character is Anya’s grandfather, Aleksei Gerasimovich Golub, a shoemaker who was born in the North Caucasus before the Russian Revolution of 1917. One of the fables he passed along to his grandkids involved a long ago, early morning trek through the streets of Blagodatny. Aleksei was nursing a hangover from the previous evening’s festivities, and he suffered under a rising summer sun.

Aleksei paid a visit to an acquaintance who lived along the route to work, secretly hoping that this hospitable friend would offer him a drink of cold milk. The friend—Pyotr Vasilevich—did just that. Aleksei refused once, partaking in a custom in which it was polite for a guest to refuse offerings of food or drink initially and for a host to then insist. Pyotr insisted in keeping with the custom, but Aleksei was hit with what Anya calls “a stubborn, Slavic politeness that often overcame him” and refused a second time. He expected a another offer, but it never came, and so he trekked back out into the heat, parched and unsatisfied.

Anya claims that her grandfather told this story so often that she suspected that something about it haunted him, even if he found it humorous. She writes,

“What I took away from my grandfather’s account is that chances are there to be taken and opportunities don’t come around every day, so it makes great sense to take hold of them with a strong grip. I think about this moral of missed chance often, and have used it as a guiding force in my own life. It helps me see the big picture, and I often ask myself whether I’m accepting my glass of milk or letting it go. When it comes to my professional life, which today involves cooking, coming up with recipes, and dreaming about food, I’ve found one very straightforward way of fulfilling the moral of my grandfather’s story: cooking with the seasons.”

This is all my very roundabout way of saying that, even if Anya lists the borscht as a winter recipe (one of the nice features of her new cookbook is that recipes are marked by season), it felt like a fulfillment of her invitation to seize chances to use my beets and cabbage in this beautifully colored, delicious soup. 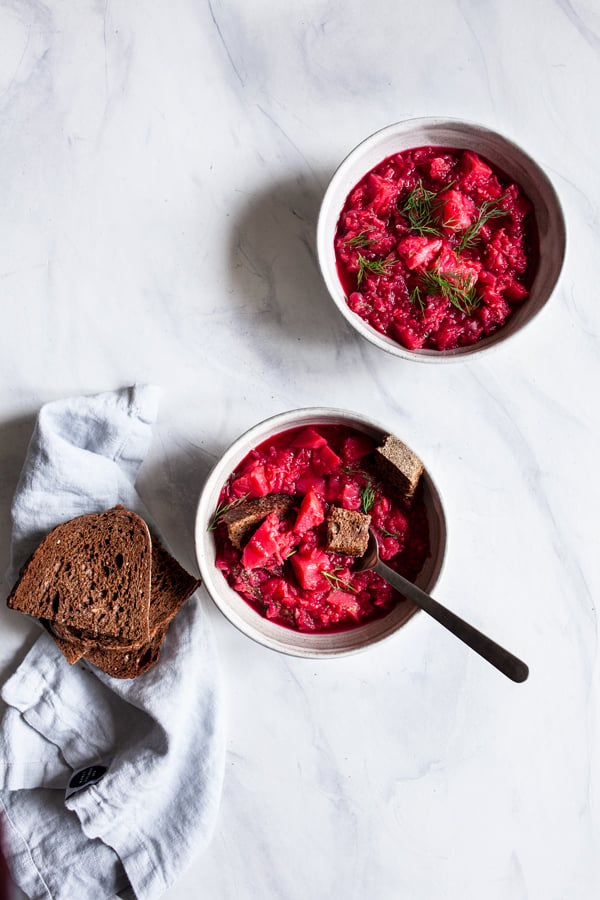 I didn’t review Anya’s first cookbook, The Vibrant Table, on my blog, but it’s one of the most creative plant-based cookbooks I’ve come across, and her blog, Golubka Kitchen, is a favorite. Anya’s recipes are always playful and nourishing, but what I think love most about them is their color. They’re always a joy to look at: fresh, bright, and vibrant indeed.

Simply Vibrant is tribute to seasonal cooking, but it shares the qualities that I love about Anya’s other books: thoughtful recipes, an emphasis on whole foods and cooking from scratch, and a sense of connection to tradition. Anya often interjects stories about her family and her roots into her headnotes, and she offers up many recipes that are or have been inspired by traditional Russian fare.

Reading her blog and books, I feel as though I’ve been transported to a kitchen in which many generations of people have prepared food with love. As someone who doesn’t have a strong family food history, it feels like a treat to be invited into Anya’s home. 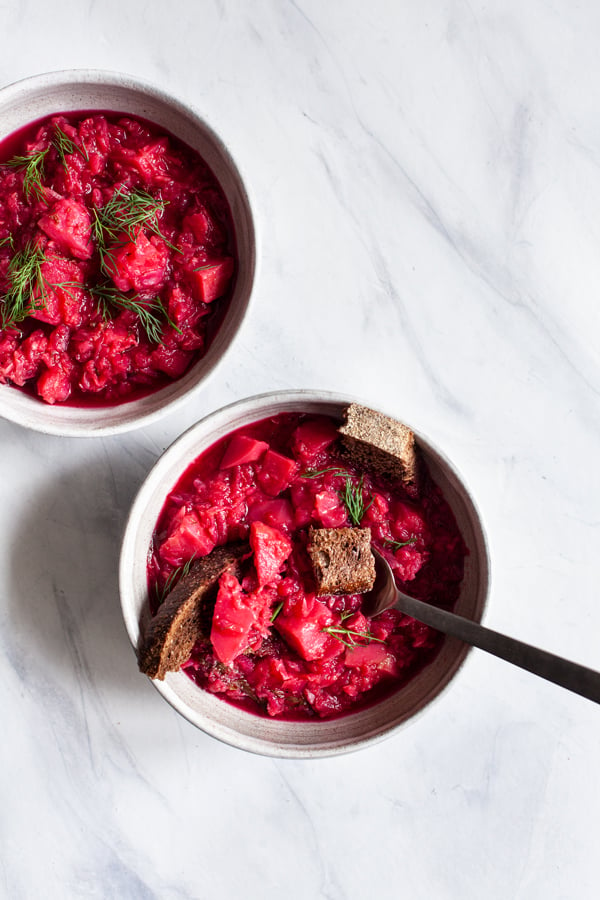 A friend asked me early this winter if I had a go-to borscht recipe, and I really don’t, so I’m happy to accept Anya’s as my first. Really, it’s her mother’s. Anya writes that “my mother came up with a unique vegetarian version of her beloved staple in an attempt to give us kids lighter, healthier fare.”

When I first read the recipe, it seemed as though it demanded a lot of slow simmering and layering, and even though school’s out I wasn’t sure about the time involved. I often take liberties with cookbook recipes, but I follow Ina Garten’s suggestion of always making a recipe exactly as written, or close to it, the first time I make it. That way I know what it’s supposed to taste like, and I get a sense of what each ingredient and step contributes.

I’m so glad I made the recipe as Anya relays it, rather than taking shortcuts. She notes that her mom’s way of “gently steeping a gigantic amount of various vegetables in their own juices gives this vegetarian borscht irresistable flavor,” and she’s right: not only is it incredibly flavorful, but it’s better if you let it sit for a day before eating. Allowing the flavors to meld makes a huge difference.

Anya claims to have a very intuitive approach to cooking, so while I wanted to be faithful to her technique, I did throw in my own small flourish, which was a big splash of red wine vinegar at the end. I love acid, and even though the tomatoes contribute some of their own, I thought it brought out even more flavor from the soup. I served mine with old-fashioned pumpernickel bread (both on the side and ripped into rustic croutons), but I love Anya’s suggestion to stir in something creamy (vegan sour cream, cashew cream, or yogurt would all be great). 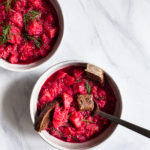 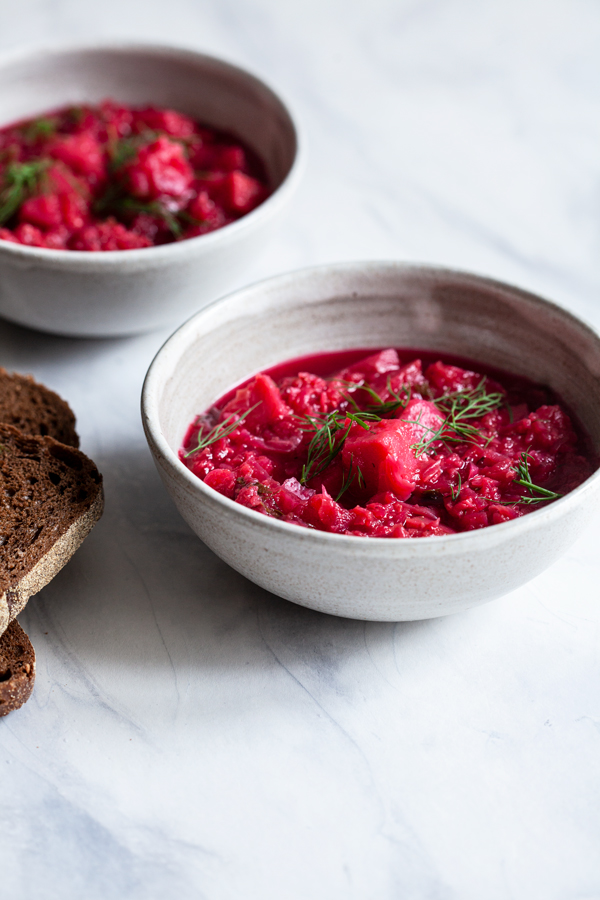 Other recipes in the book are similar to this one in that they might involve a stepwise process, but it’s not random: if different vegetables are cooked separately, for instance, it’s so that each kind is perfectly tender, rather than over or undercooked. Many of the remaining recipes are incredibly simple, including the salads and bowls, the basics, and the vegetable sides.

The book also includes a whole chapter of porridges and pancakes (my kind of breakfasts!), wraps and rolls, risotto, paella, and pilaf, and noodles, pasta, and pizza. There are so many things I’m eager to try that I don’t know where to start, but I’m keen on the Bukhara Farro Filaf (a spin on plov), the spelt fettuccine with melted rainbow chard, the chickpea and kohlrabi salad wraps, and the couscous stuffed collard greens in coconut curry sauce. The book isn’t all vegan, but it’s very predominantly plant-based, and most of the recipes can be veganized with non-dairy substitutions if they aren’t vegan already.

I’d love for one US reader of this blog to have a copy of Anya’s bright and bold tribute to seasonal fare! Enter below for a chance to win a giveaway of Simply Vibrant; as usual, I’ll pick a winner in two weeks.

It’s been a big week around here, so I’m winding down slowly and intentionally, grateful that it’s now Friday and a weekend is on the way. I’ll see you for Sunday’s roundup.