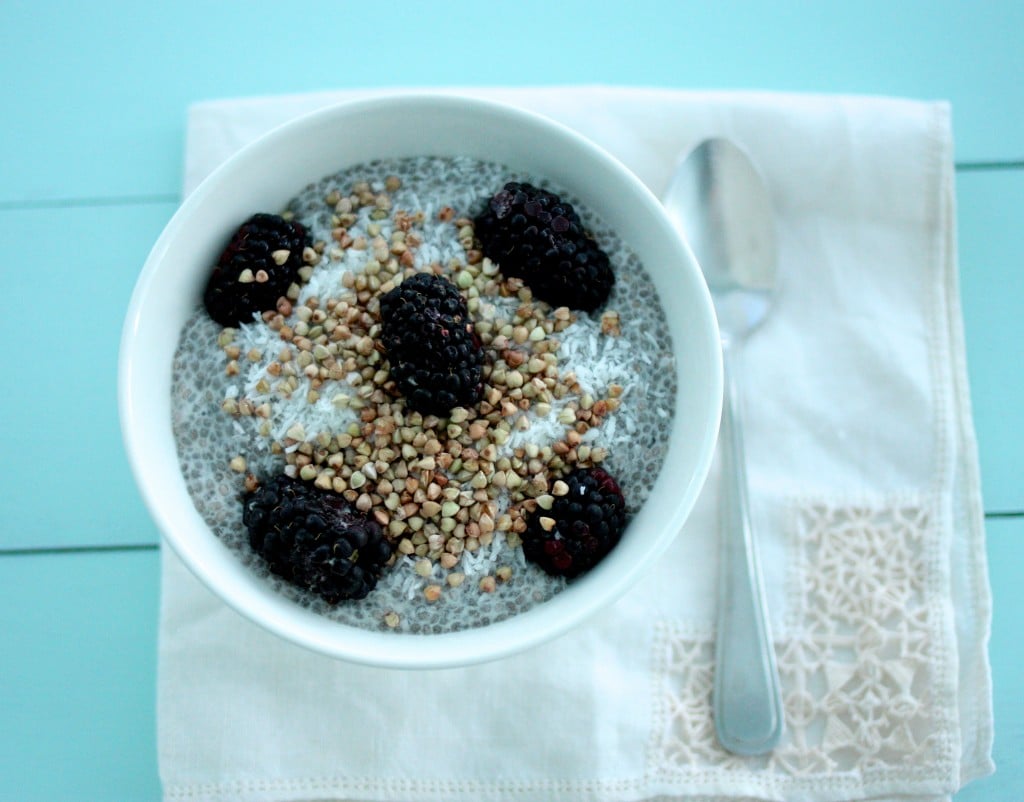 Lately, I’ve been getting a bunch of questions about how I make my basic chia seed pudding, spurred on by the many photos of chia goodness that pop up on my Instagram feed (hey, have we met on Instagram yet? If not, let’s–you can find me here). I eat a lot of chia seed pudding. A whole lot. It’s probably my favorite breakfast, and I also tend to make a lot of it at once, which means I frequently enjoy it as a snack, too. My ch-ch-ch-chia tab features all of my favorite recipes, but to be honest, the chia pudding I make most often isn’t any of those. It’s my simple, plain, vanilla chia pudding. And I’m not sure why it’s taken me so long to post the recipe and a little how-to.

What I’m about to share will make four servings of chia seed pudding. If you want to cut this recipe in half, you can, and heck, if you want to go crazy and double it, you can do that, too. But what you need to know is the basic ratio of chia seed to liquid that will yield perfect results. For me, it is:

3 tablespoons:1 cup–that’s what you need to remember! The liquid can be any plant milk, but coconut water and juice are great, too.

When I’m making a single serving of chia pudding at a time, I usually just stir the cup of liquid and seeds together. I wait a minute or two, then stir again. I stir again five minutes later, and five minutes after that. After that, I just let it sit for an hour or two before enjoying. Usually, I’m prepping chia pudding for breakfast, so I let it sit overnight in the fridge. In the morning, I’ll add a tablespoon or two of extra almond milk if necessary.

When I make a bunch of servings at once, though, it’s much easier to make chia pudding in my blender. Here’s what you’ll need to make four servings at a time: 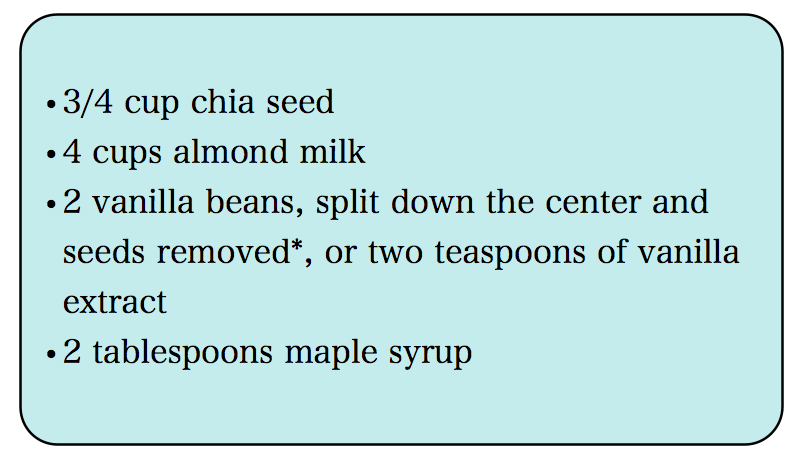 *You can find a vanilla bean tutorial here. 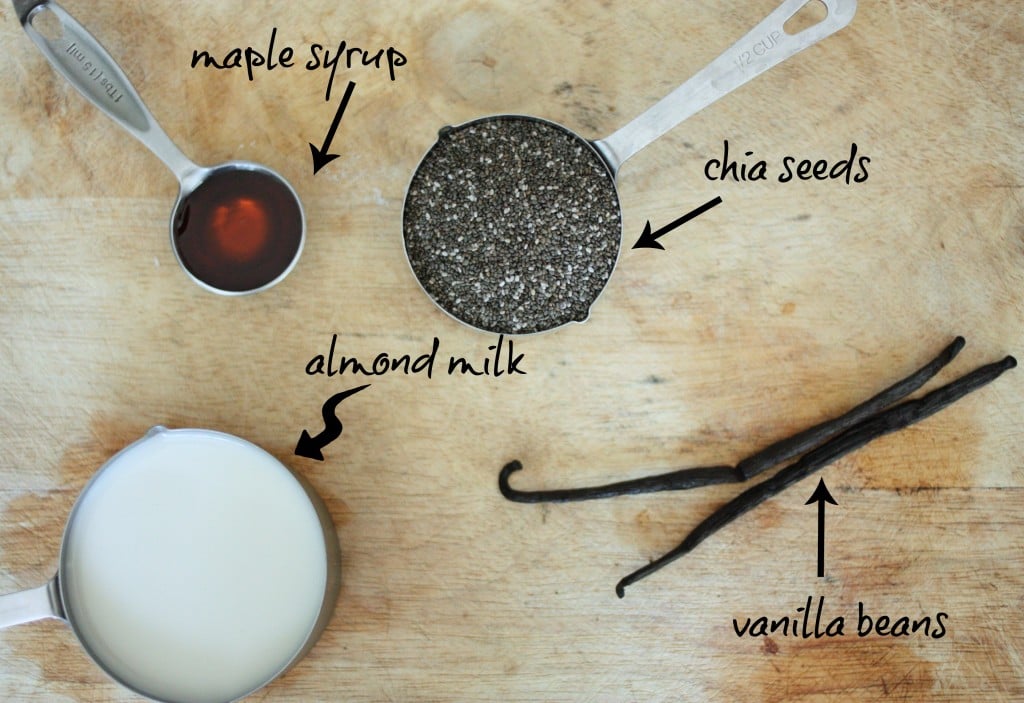 I add my almond milk, vanilla, and maple syrup to my blender and blend them up. Then, with the blender on a very low setting (the lowest setting in a regular blender, or about a 2 or 3 in the Vitamix), I add the chia seed. 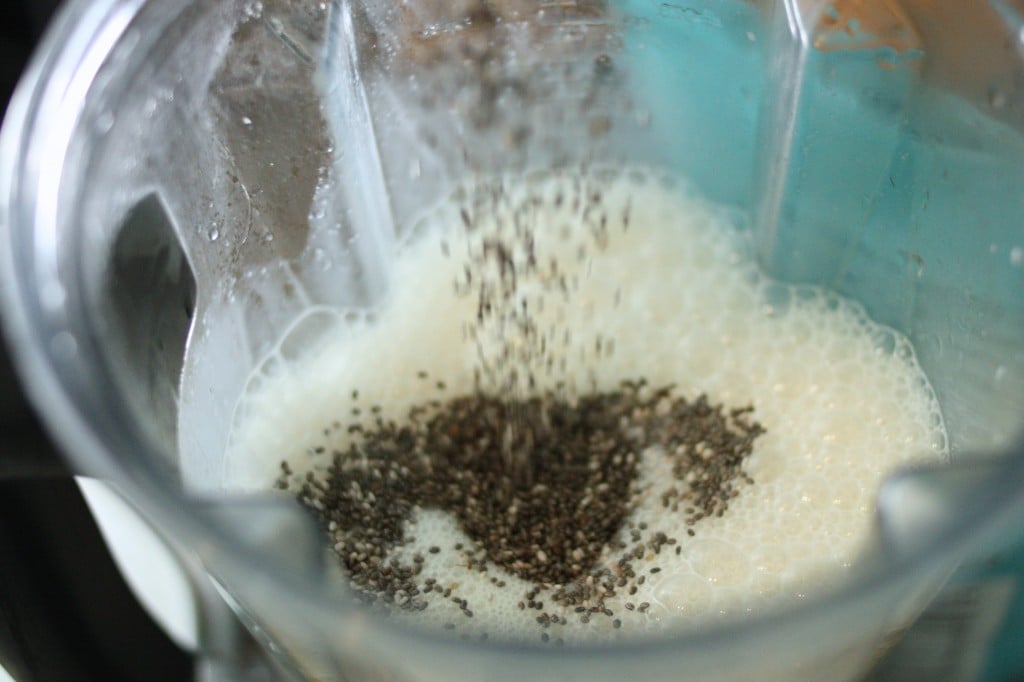 It blends up without getting stuck together, and it’s a fast way to mix things up. (Thanks, Elizabeth, for this tip!!)

I transfer the whole thing to a mixing bowl and–just as with a single serving–I give it a stir. 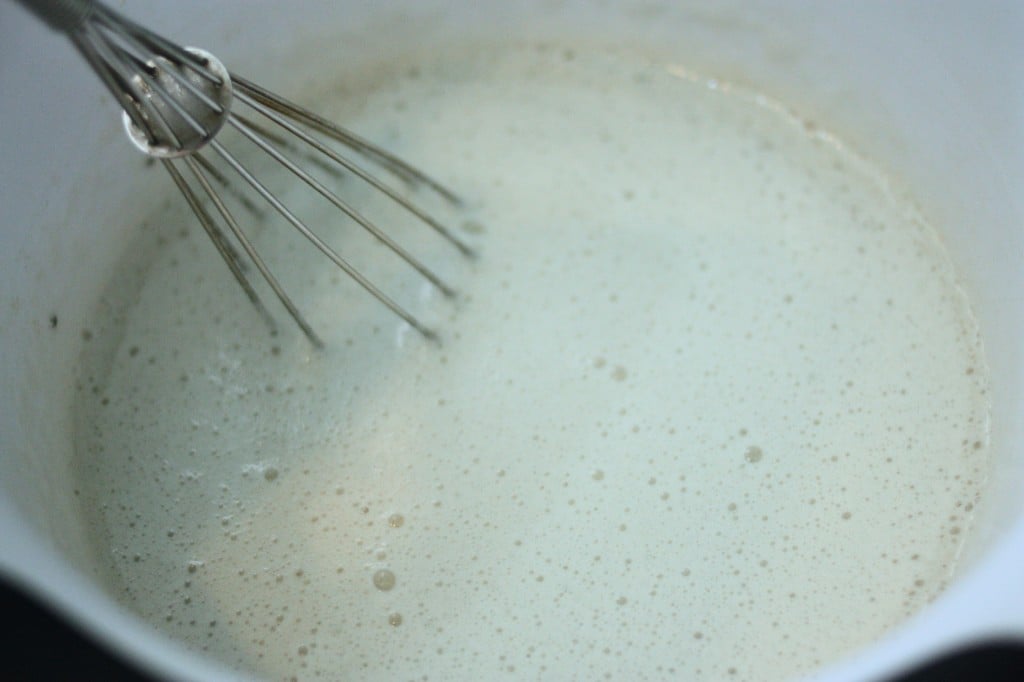 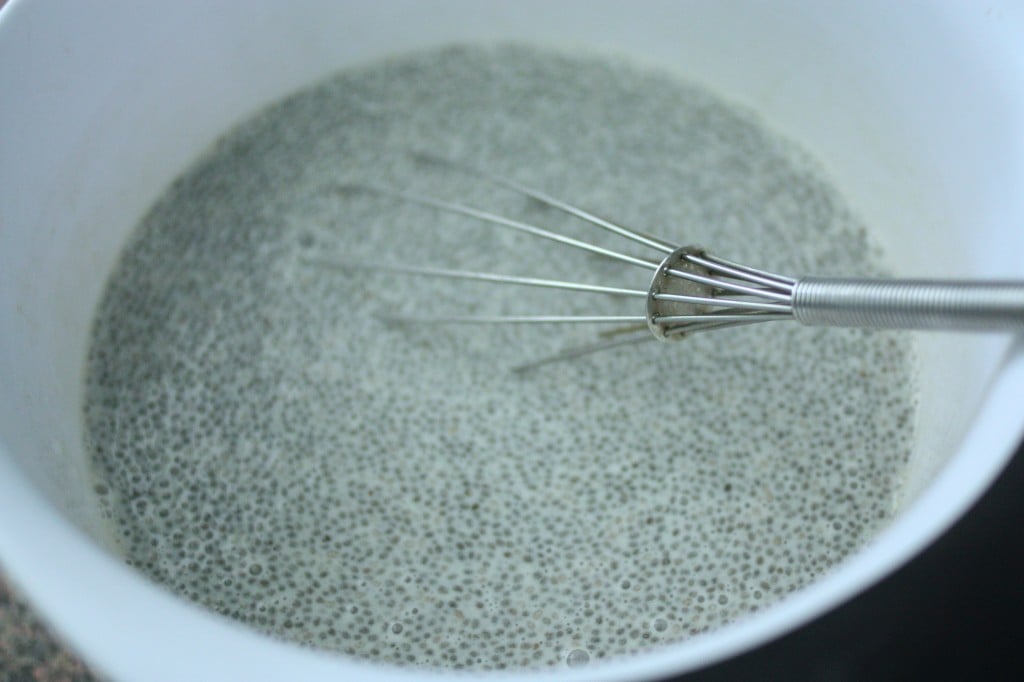 I give it another stir a moment or two later. I stir it five minutes later, and five minutes after that. Then I let it sit for an hour (thirty minutes will be enough time if that’s all you have) before transferring it to storage containers. 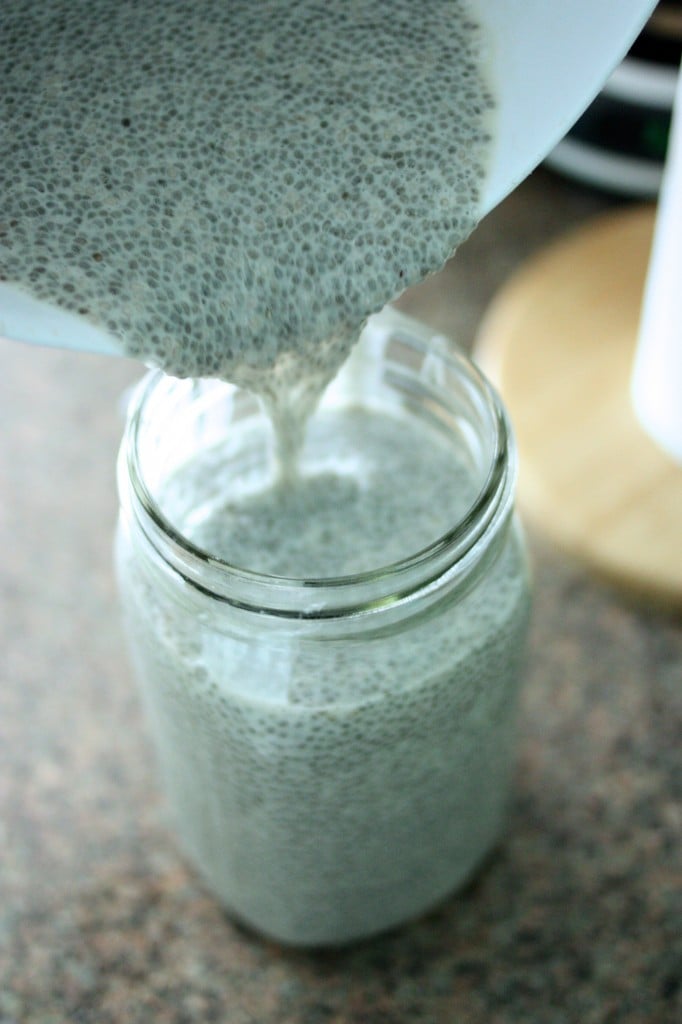 I usually get about one quart and one small, half pint jar. For me, that’s about four servings. 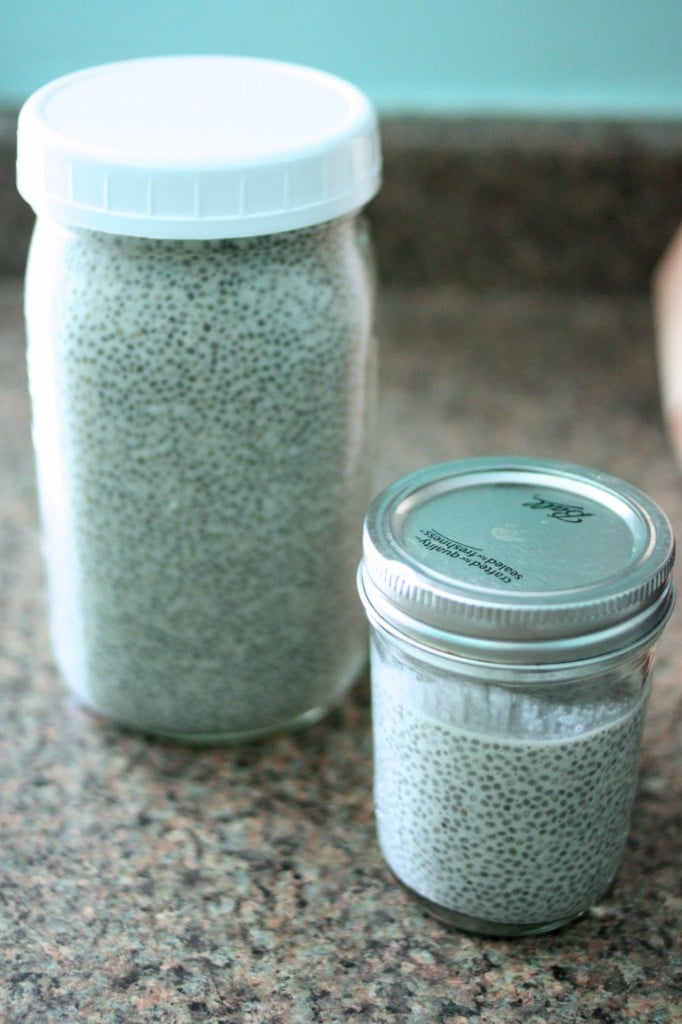 I very often pack up chia seed pudding as an afternoon snack when I’m either at work or working from a coffee shop; it’s particularly great with blueberries, cacao nibs, or goji berries.

And here’s the chia breakfast that got so much love on Facebook and Instagram last week: a parfait of 1 heaping cup vanilla chia pudding, two tablespoons of my “buckwheaties,” two tablespoons of shredded coconut, and fresh blackberries. 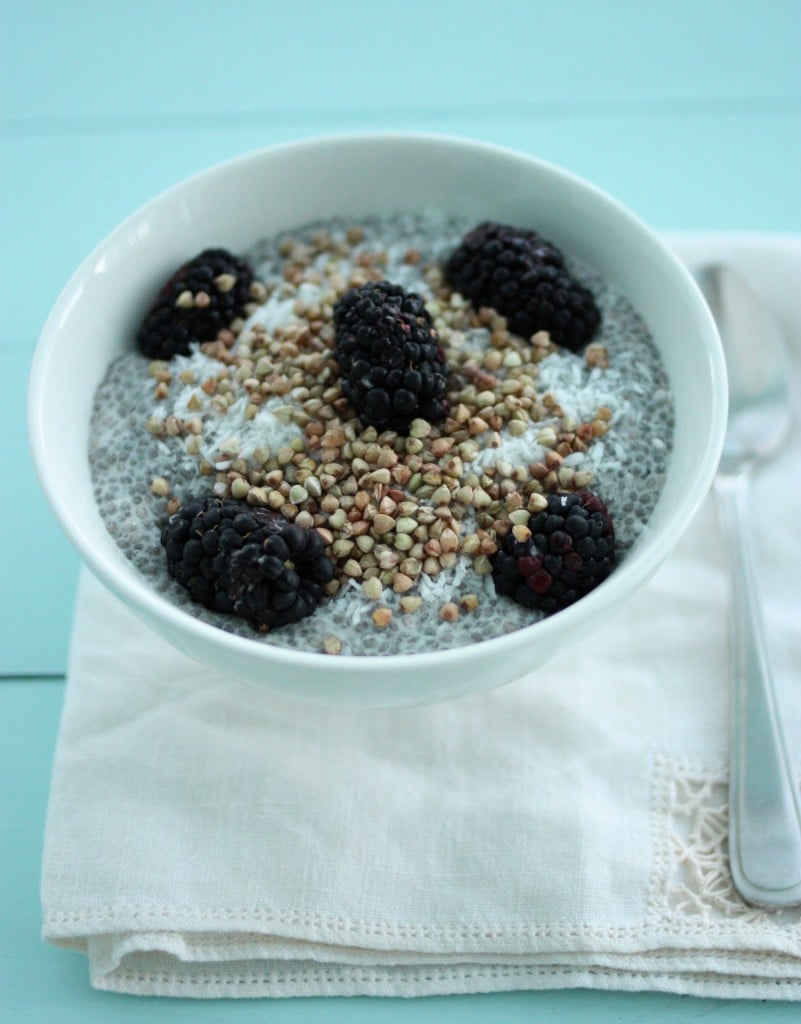 It’s as beautiful as it is delicious–and fun to eat. Here it is, in snack size! 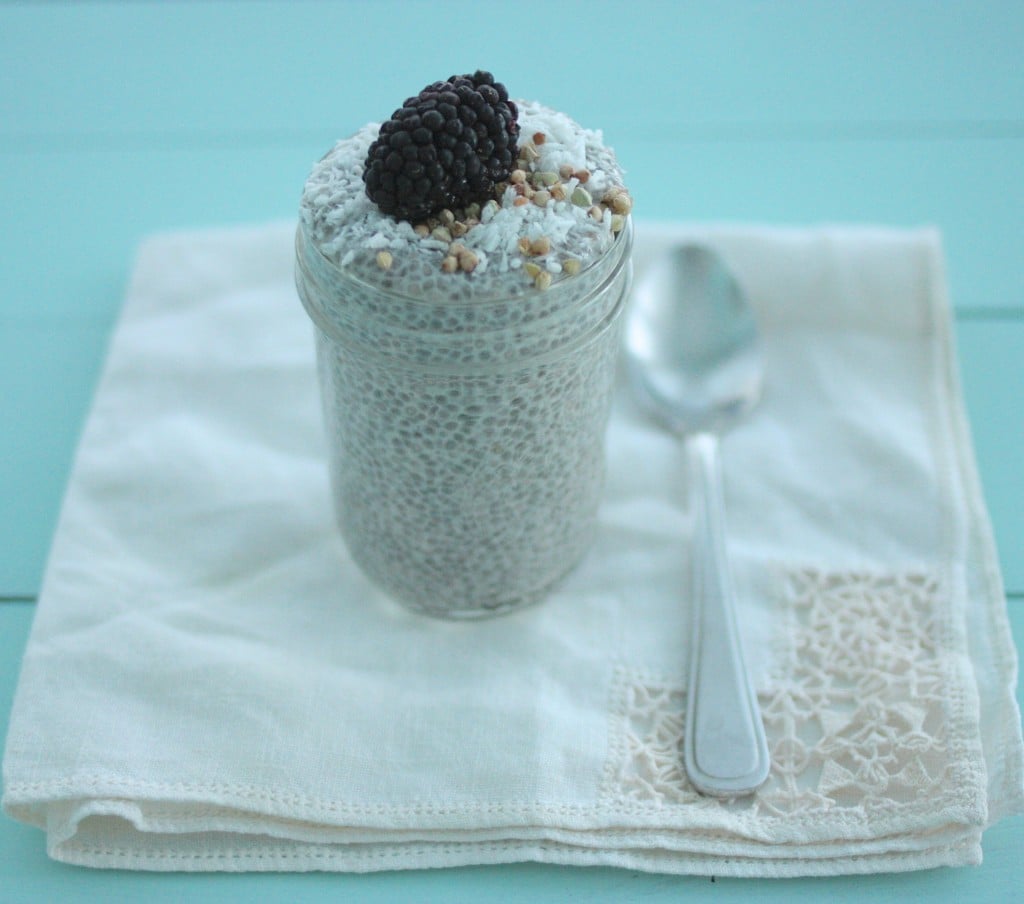 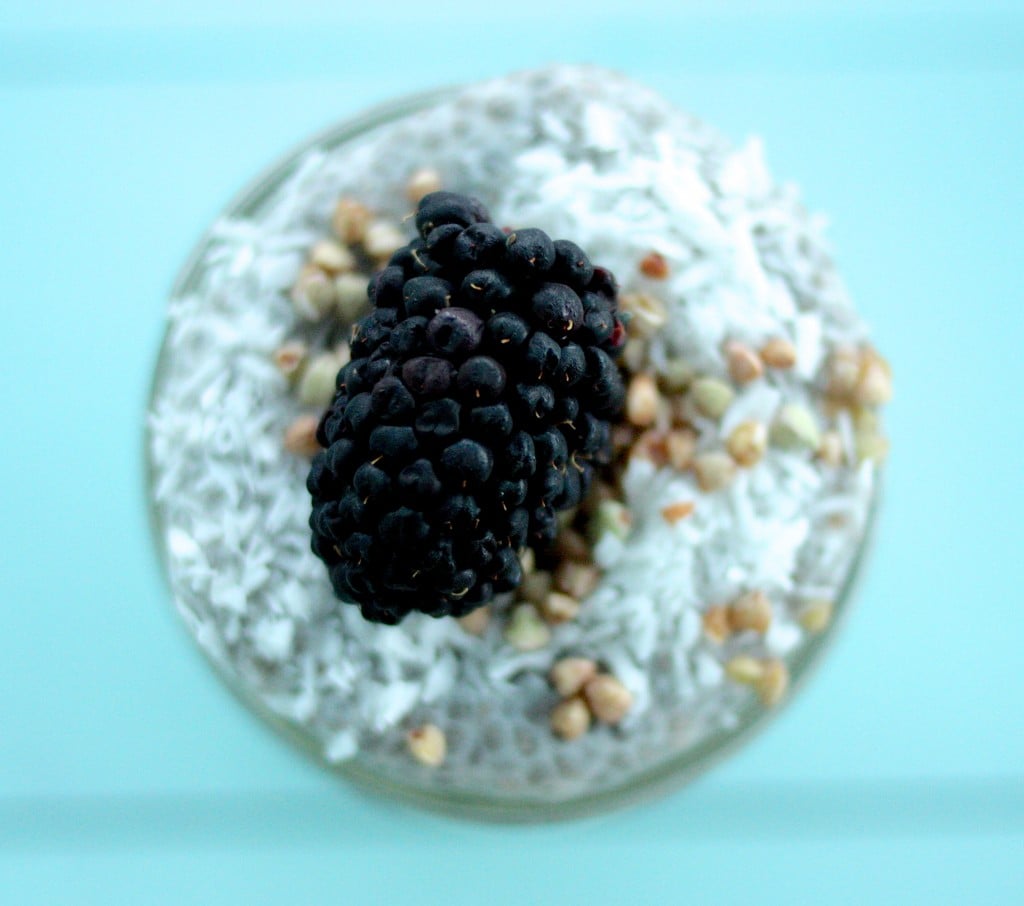 I like any berries on top of a chia pudding, but local blackberries have been particular giant (and delicious) lately. 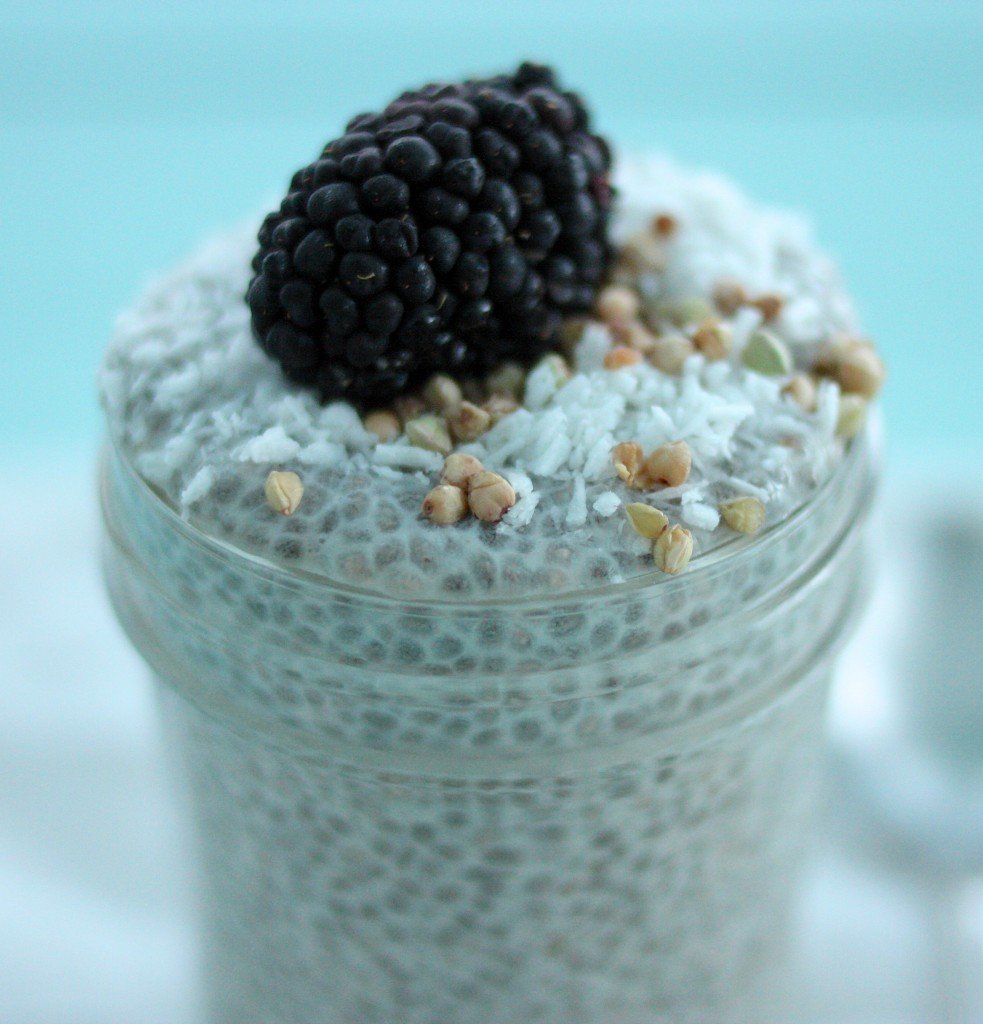 So, that’s my plain chia pudding process. Of course, you can add just about anything you like: ginger, cinnamon, cocoa, protein powder. This dish is easy to customize.

Hope this has been helpful. What’s your favorite chia flavor? I always like getting new ideas!