The Best Vegan Gingerbread Cake
4.89 from 9 votes
Jump to Recipe 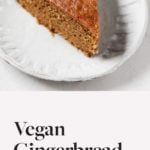 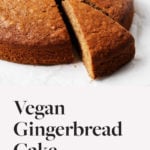 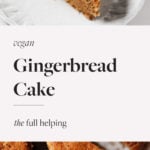 This is an unfussy, uncomplicated, delightful vegan gingerbread cake. It’s light and airy, not dense, and every bite is infused with ginger and cinnamon.

I know it takes a little moxie to call a recipe “the best” anything. I also know that there’s really no “best” version of a dish. Especially a classic, beloved dish. Taste is so subjective.

But sometimes it’s hard to contain one’s excitement about a recipe. And I really, really love this vegan gingerbread cake. So I can’t help throwing attaching the superlative to it. Because it really is the best, to me.

Laurie Colwin loved gingerbread. She devoted two whole chapters in two separate books to it. Her love of gingerbread is one of the most memorable things about her books, Home Cooking and More Home Cooking.

In 2016, writer Lindsay-Jean Hard did a ranking of some of Colwin’s gingerbread recipes for Food52. Hard wrote,

“I nodded along with Colwin all the way through both books and felt like I’d found a new friend in her words. And when a friend talks about making something over and over again, you make it: Time to bake some gingerbread.“

I can relate to that feeling.

Lindsay-Jean Hard and her taste testers actually chose a different Laurie Colwin gingerbread as their favorite. They preferred Colwin’s “damp gingerbread” (sort of an unfortunate name).

I’ve made that gingerbread, too, and I liked it. I had no trouble finishing mine. But again, taste is so subjective. I found that cake to be a little denser and more stodgy than the kind of cake that I crave.

My favorite kind of gingerbread cake

And what is that kind of cake, exactly?

I like a gingerbread that has plenty of fresh ginger, but isn’t overly spicy. I like being able to taste the cinnamon, too.

More importantly, I like my vegan gingerbread cake to be light, even a little airy. Moist and tender, yes. But not dense or claggy (claggy: a word I’ve learned from multiple GBBO binges).

Part of what I love about cake is its lightness and simplicity. I love a good, dense quick bread, like banana bread or chocolate pumpkin marble loaf. But when I sit down to eat a piece of cake, I want something just a little more delicate.

As it turns out, the factor that makes a big difference with gingerbread cake texture is the choice of sweetener.

I’ve seen all sorts of sweeteners in gingerbread recipes. Some call for sugar, some honey, some molasses. Most that I’ve seen call for a mixture of molasses and sugar. The more molasses, the denser and darker the cake will be.

It’s not that I don’t like molasses; I do. But in cake—as opposed to, say, molasses ginger cookies—I think less is more. Each time I’ve made vegan gingerbread cake with a lot of molasses, the molasses has been all that I can taste.

Laurie Colwin gravitated toward non-molasses sweeteners in a number of her gingerbread cakes. Her favorites were Steen’s Cane Syrup and Lyle’s Golden Syrup.

I had no idea what either was until I read Colwin’s books. But sampling them made me a fan quickly.

Steen’s is cane juice that’s simmered in an open kettle. It reduces to a golden syrup that’s someplace in between maple syrup and molasses. It’s more thicker than maple syrup, thinner and less assertive than molasses.

It’s really delicious. Laurie Colwin called it a “cheap luxury,” and I can see why.

Lyle’s golden syrup is a syrup made from cane sugar. It’s also delicious, but in a different way. I think it tastes like a richer, more syrupy version of agave. I’ve also read that it’s sometimes used as a honey substitute, and that makes sense to me. The consistency and color are very close.

I think it’s fun to explore new baking ingredients, like these sweeteners. I gave both a try in my gingerbread experiments.

In the end, I liked Steen’s Cane Syrup best for the cake. Much more than molasses, and slightly more than Lyle’s (but I liked Lyle’s, too). If you happen to have either one of these syrups at home, or you want to try them, this is the place to use them.

But no need to purchase a new syrup, either. Part of why I wanted to share a vegan gingerbread cake this year is that it’s a simple dessert. And simple is what so many of us need and crave this year.

With this combination, you’ll taste a hint of molasses. You’ll know it’s there. But the cake won’t taste like molasses once you bake it, and it will be a light golden brown—lighter than gingerbread cookies.

If you happen to love molasses flavor, then feel free to use more! Again, this is only my favorite vegan gingerbread cake. You’ll have your own preference.

Once you choose your own syrup adventure, the rest of this cake is pretty straightforward.

I like the taste of vegan butter as a fat source in this cake. The butter goes into the cake melted, along with the syrup. The brand doesn’t matter too much: use what you can find and what you like.

However, if you don’t have vegan butter, don’t worry. A neutral tasting vegetable oil, like refined avocado, can be substituted (use the same amount, six tablespoons).

I like unbleached, all-purpose flour in this cake. That said, I’ve tried making it with whole wheat pastry flour and white whole wheat flour, too. Both work well! I also think that light spelt flour would be fine for the recipe.

And if you need to make this cake gluten-free, you can use a gluten-free, all-purpose blend of your choosing (I like King Arthur’s).

Applesauce is my egg replacer in the vegan gingerbread cake. It also adds moisture, without the need for too much vegan butter.

Brown sugar helps to sweeten the cake, along with your syrup of choice. It adds more moisture to the batter than cane sugar. But if you have cane sugar at home, that’s OK—I tested the reicpe with it as well, and it works!

I also love using coconut sugar, which I think tastes a bit like caramel, in this cake.

Just ginger and cinnamon. Which makes the cake different from a lot of gingerbreads that call for cloves. If you love the taste of cloves in a cake like this, go ahead and add 1/4-1/2 teaspoon.

Totally optional, and not pictured! I like the cake best plain. But Colwin’s original recipe gives an option for including them, and I’ve tried it. They’re a fun change for when you want something that’s a little more like fruit cake.

What size pan should I use?

I learned this year that it’s helpful to give a few options for baking vessels when I share baked goods. No one likes to purchase a new dish for a single recipe.

Swapping baking vessels can be a little complicated for cooking times. But there’s usually a way.

I recommend cooking the vegan gingerbread cake in an 8-inch round cake pan. I love this one, which has a removable bottom.

No matter what, take a peek at the cake after 35 minutes. A bigger baking dish may make the cake cook more quickly.

This vegan gingerbread cake can be easily made in advance of a special occasion. It will keep in an airtight container or with wrapping for about five days. I recommend leaving it at room temperature for the first two days, then transferring it to the fridge.

If you think you won’t eat the cake within five days, then you can go ahead and freeze it (or some of it). The gingerbread will last in the freezer for up to six weeks. 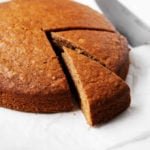 Adapted from the “Old-Fashioned Gingerbread” in Laurie Colwin’s More Home Cooking, adapted from Mary Norwak’s recipe in The Farmhouse Kitchen.

I don’t really think it gets homier or more humble than gingerbread as a holiday dessert.

I love my dark chocolate pear cake, and for the past few years it’s been my Christmas dessert of choice. It’s rich and beautiful to look at. The many dark chocolate chunks, which sink into the top of the cake, make it feel decadent.

Somehow, an elegant chocolate dessert just isn’t what I’m craving for Christmas of 2020. I want something simpler and plainer, which smells of baking spices as it cooks.

I want a cake that would be great for dessert, with our without vanilla ice cream, but also fine for snacking (maybe with a turmeric chai latte?) as the holiday season winds down.

This vegan gingerbread cake is what I want, and need. And even though there are a lot of gingerbreads out there, I hope that it will be as perfect and pleasing for some of you as it is for me.