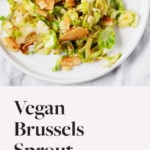 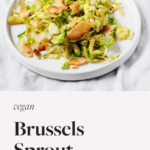 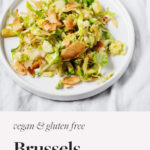 Ambitious centerpieces are fun. But at the end of the day, Thanksgiving is all about the side dishes. I’m sharing some of my favorites this year. Including this smoky, savory, plant-based Brussels sprout hash.

Smoky, savory—and simple. I think that side dishes should be low-stress, and this one really is. If you can find pre-sliced Brussels sprouts, so much the better!

How to shave Brussels sprouts

The first is to use a good mandoline or food slicer. I have this food slicer, which is a splurge, but it’s one of my most used kitchen tools. I rely on it constantly.

You can also use a food processor fitted with the slicer blade, if you have one.

Finally, you can simply shave your Brussels sprouts by hand! Use a very sharp knife, and be sure to work carefully. This video gives good instructions.

The Brussels sprout hash is really nice on its own. However, a generous topping of vegan bacon certainly doesn’t hurt. And it lends some texture contrast and crunch to the dish.

There are many ways to create vegan “bacon.” Tempeh bacon (aka smoky tempeh strips) is one of my all-time favorites. I’m also a big fan of seitan bacon (SweetEarth’s Benevolent Bacon is my number one!).

Vegan “bacon” doesn’t need to be made with a plant-protein, though. There are some vegetables that do the job well, including eggplant. Mushroom bacon is another good option.

And as you can see, coconut is also up to the task.

My coconut bacon can be prepared well in advance. That said, it’s a quick cooking recipe, so there’s no need to plan (too far) ahead. If you decide to cook the coconut bacon along with the Brussels sprouts, it needs only 13-15 minutes in the oven.

This means that you can prepare the “bacon” while the sprouts are being cooked. Win, win.

Smoked paprika (or pimenton) is my favorite ingredient for adding smoky flavor to plant-based dishes. It’s easy to store, and a little goes a long way, so it’s also an economical way to create smokiness in recipes.

If you don’t have smoked paprika on hand, you can try using liquid smoke instead. I think Bragg’s Liquid Aminos is a little smoky, too. And if all else fails, you can simply substitute sweet paprika for smoked.

A little smoked paprika goes a long way. You’ll see that this recipe only calls for a quarter teaspoon. Feel free to add some extra if you’re craving more smoky flavor!

A touch of maple syrup goes a long way in balancing some of the smokiness and saltiness of the Brussels sprout hash. I think maple syrup is the best sweetener to use in this recipe, flavor-wise. But a pinch of brown sugar or coconut nectar would also work well!

The hash has lots of different tastes in one place. It’s smoky, salty, a tiny bit sweet, and very savory. Thanks to a tiny splash of apple cider vinegar, it’s also got a touch of acid and tartness. Feel free to substitute white vinegar for ACV if you need to.

Whether you’re celebrating Thanksgiving this coming week or not, the Brussels sprout hash makes an awesome, all-purpose side dish for fall.

I’ve been serving it with cooked grits or polenta (similar to this breakfast, which I love), tossing it into salads, and serving it as a quick green side at dinnertime. I love scooping it onto baked sweet potatoes, too. It’s so good.

If you like, you can add some other vegetables to the hash, like celery, carrot, broccoli stems, or leafy greens. And you can also use leeks in place of the onion, or a combination of leeks and shallots. Like most hash recipes, this one is easygoing.

If you’d like to offer up the Brussels sprout has along with one or two other side dishes, here are some of my favorites: 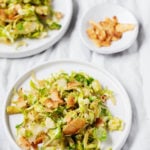 Roasted Brussels sprouts are a traditional Thanksgiving choice. I love oven-roasted sprouts, too. But I’m happy to have a new way to prepare one of my favorite crucifers.

I hope you enjoy the hash recipe!