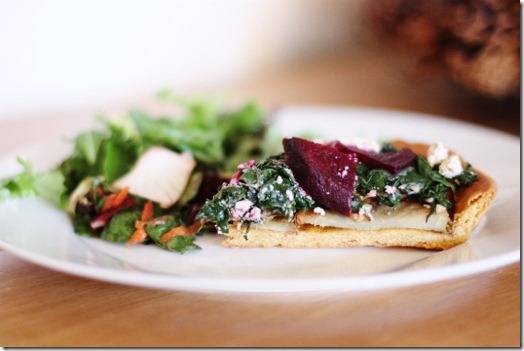 Merry post-Christmas! I hope you all had joyous and merry holidays, and that you enjoyed some excellent food. Me? Well, let’s just say that I was well fed. I had the pleasure of dining at my dear friend Blanche’s home on Christmas night. The spread, while not intended specifically to be vegan, was one of the more vegan-friendly feasts I’ve seen in ages. 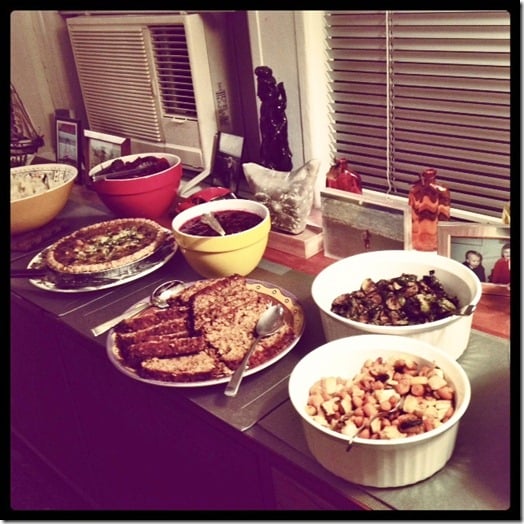 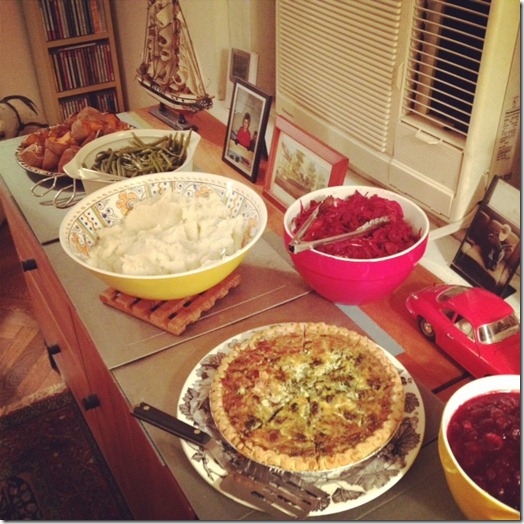 Highlights: A raw beet and fennel salad that I am dying to recreate soon, on my own; cranberry sauce; butternut squash puree; roasted turnips, carrots, and parsnips; simple baked sweet potatoes; roasted brussels sprouts; a kale, spinach, scallion, and mixed veggie salad (to die for—I had 3 servings!); and a lentil and sweet potato loaf courtesy of moi (recipe tomorrow). My plate raneth over with plants: 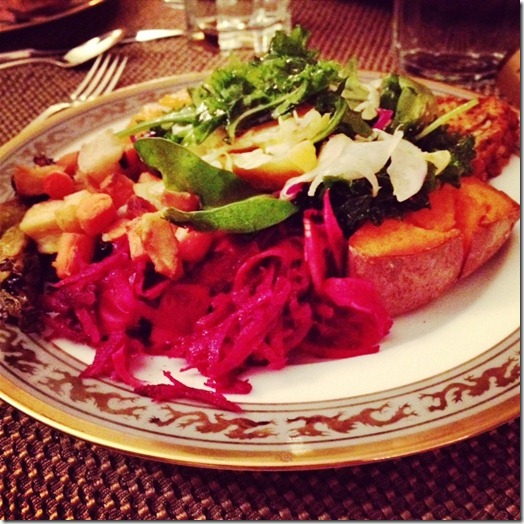 What a spectacular feast. One can count upon fine food and generosity in Blanche’s home!

On Christmas Eve, my Mom and I enjoyed an intimate meal at our place, and a menu of my own devising. There were mashed turnips (yum), there was a big salad of beets, spinach, radicchio, carrots, celery, and balsamic dressing, and there was the savory tart that I am about to share. 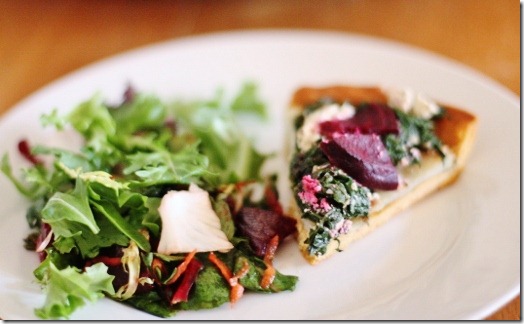 Tarts aren’t usually my thing. They take a lot of work, and they’re often on the rich or heavy side. This tart is a little time intensive, sure, but it is also delicious, and it’s uber healthy! It features dark leafy greens, with all of their tremendous nutrition properties, beets, which are phytonutrient superstars, decadent cashew cheese, and savory roasted potatoes. Best of all, the crust, which is typically rather void of good nutrition, is made of chickpea flour, which is impressively high in protein and creates a crisp, savory base for this delectable dish.

The key to making this tart is to cook it in parts. I roasted potatoes and beets and made the crust on Friday; I sauteed my kale and baked the tart crust on Saturday, then warmed the whole dish. Do it in stages, and it feels like a cinch!

As for the cashew cheese, it’s optional. And soy feta or daiya would also work well! 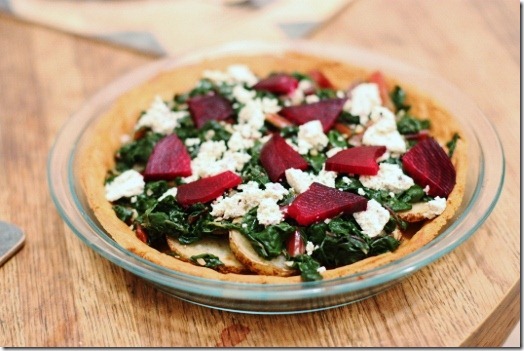 Prep Work (one day in advance):

1) Place the flour, salt, herbs, and pepper into a mixing bowl. Add the olive oil and mix quickly; then, add the water and mix with hands till a solid dough forms. Add more chickpea flour if necessary to reduce stickiness.

2) Place chickpea crust onto a sheet of saran wrap and cover with another sheet. Flatten into a disk, and refrigerate for one hour, or overnight (recommended).

1) Preheat oven to 375 degrees. Thinly slice 1 large russet or other white potato. Place slices onto a baking sheet and brush with olive oil. Dust with salt and pepper.

2) Bake potatoes till brown on each side, flipping once (about 30 minutes). Set aside or refrigerate.

1) Wrap beets in tinfoil. Roast in an oven set to 375 degrees for about 45 minutes, or until a knife pierces beets easily. Run under cold water and slip skins off beets. Chop and set aside or refrigerate. (You can cook these simultaneously with the potatoes.)

To assemble your tart (day of your meal):

1) Heat oven to 350 degrees. Roll crust out with a rolling pin or a large drinking glass until it’s a 1/4 inch thick round. 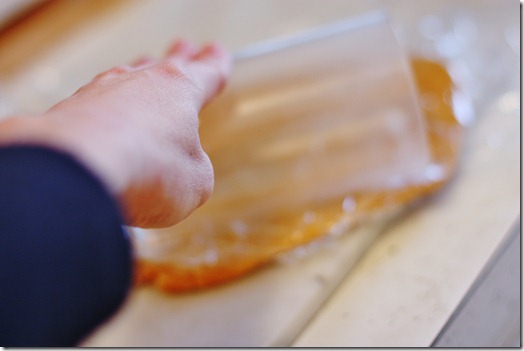 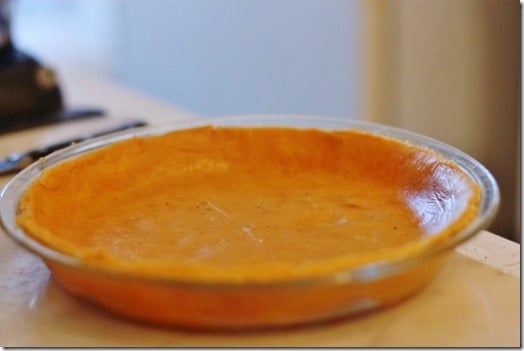 3) Bake crust for about 25 minutes, or until it’s golden brown. Add roasted potatoes to the bottom of the tart crust in a nice pattern. 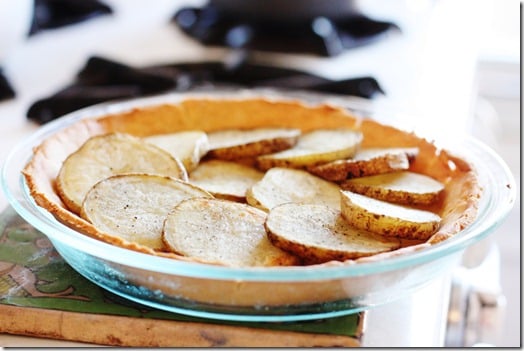 4) To prepare the chard: Bring pot of water to boil. Par boil the chard for about five minutes to make your sauteeing easier and get any toughness out. Drain chard.

5) Heat 1 tbsp olive oil in a large pan. Over medium heat, add 1 clove minced garlic and sautée for about two minutes, stirring often. Add chopped chard, and then sprinkle chard with sea salt and pepper to taste. Sautee until chard is very tender (about 5-10 minutes).

6) Layer the sautéed chard over the potatoes in the tart crust. Add sliced beets on top, and finish with some crumbled cashew goat cheese (or a vegan cheese of your choosing).

7) If you’ve done all of this ahead of time, and put it in the fridge, heat tart in an oven set to 275 degrees for about 15 minutes, or a little longer if necessary. Cut into 8 wedges, and serve! 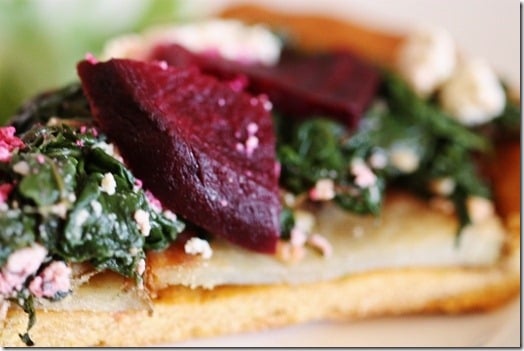 What a beautiful, festively colored vegan entrée. So elegant, too. 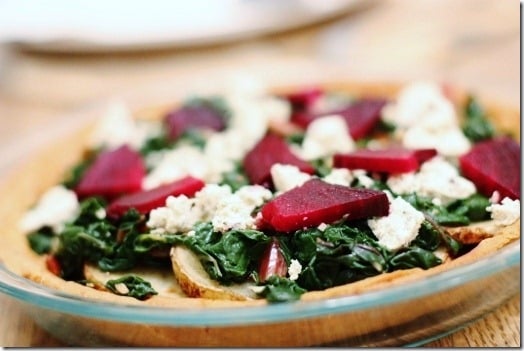 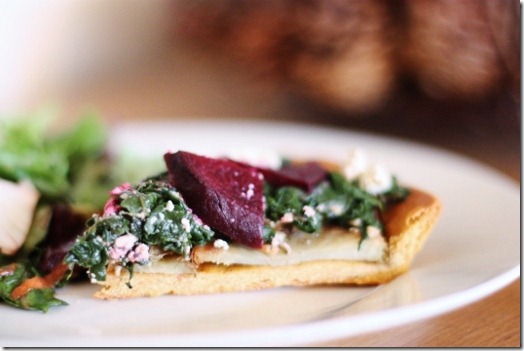 This is precisely the kind of intricate recipe that feels rewarding for a holiday. Or when you happen to be on vacation! But if you are balking at the work, feel free to:

OK, my dears. Speaking of rocking, I’m off to rock some crazy amounts of hummus with my friend Rose downtown. I’ll have a recap of that, and some other dining, very soon!