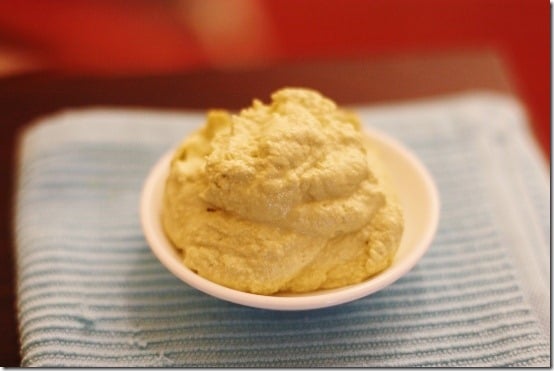 Wow! Having just written a post in which I talked about the importance of staying on topic as a blogger, I think I ought to switch gears more often! Your response to my blogging 101 post was absolutely delightful, and I’m happy so many of you found it useful. I think it would be fun to keep that conversation going, so hopefully we can return to the topic of blogging do’s and don’ts soon.

This is a week full of guest posting. If you haven’t already found it via my Twitter feed, I wrote a fun guest post yesterday for my dear friend Anne, entitled “Bet You Didn’t Know it Was Raw.” The purpose of the post was to show readers that raw foods don’t have to be categorized in a different way than the foods we already know and love. Most of us eat a lot of raw foods without giving it much thought. This should be comforting to aspiring raw foodies, because it means that choosing raw doesn’t mean trading familiar food for a foreign set of flavors and ingredients: instead, it can mean giving thought to what you already like in an uncooked form, and simply eating more of it. To read more about the five raw foods you already know and love—even if you didn’t know they were raw—head over to Fannetastic Food and check the post out! And please stay tuned for a very special guest post announcement tomorrow.

Today, it’s back to the normal routine here at CR. You know, one of the nice things about being a “veteran blogger”—to use an expression I pulled out in yesterday’s post—is that I’m finally at a point where I feel I can comfortably repeat or reinvent recipes without having my readers feeling short-changed. Not too long ago, I shared my recipe for cashew alfredo for the second time; I think a lot of my readers actually appreciated the reminder that the recipe exists. There’s nothing more fun than finding an old recipe—one I haven’t made in a long time—and rediscovering it. It’s like reconnecting with a long lost friend, with the added benefit of being able to make small modifications or improvements if you want to. Today, I’m bringing one of my favorite recipes back to the front page of CR. It’s my raw hummus, and it’s a CR classic.

In my guest post for Anne, I emphasized that many commonplace, popular foods are already raw. Hummus is sort of the opposite: it’s not a raw food, but many people assume it is until they’re forced to give it a little thought. Yes, it’s cold, and yes, it’s veggie-based, and if you use canned beans it doesn’t seem to necessitate cooking. But the beans are nevertheless cooked, so it’s not technically a raw food. Now, I don’t subscribe to the idea that cooked food is inherently inferior to raw food. But lots of raw foodists do.

So what happens if you’re a strict raw foodist who loves hummus? This hummus recipe happens. There are many raw hummus recipes that are offered as a solution to the cooked chickpea dilemma: some use sprouted, raw chickpeas, some use almonds. I happen to find the taste of sprouted chickpeas totally unbearable, and I’ve never been able to digest them, so those aren’t an option for me. Almond hummus is tasty alright, but the combination of almonds and tahini/sesame seeds makes it a very high fat and high calorie option; this is totally fine if you have normal needs or even need higher calorie food, but it’s not an ideal recipe for, say, a CR client who needs to lose weight.

The solution? Zucchini. Zucchini hummus is a staple in the kitchens of many raw foodies, with good reason. It’s delicious, it’s easy, it’s not too heavy, and it tastes and looks a lot like regular hummus, but it’s suitable for strict raw foodists and people who don’t digest beans very well. I tend to make classic hummus or any one of my hummus varieties (such as sweet potato hummus) more often, because I like the traditional texture and the protein boost, but I frequently enjoy zucchini hummus as a tasty alternative. It’s a terrific filling for wraps and sandwiches, and it’s also great atop salads or as a dip. If you’re newly raw-ish and wondering how to replicate the hummus you know and love, this recipe is absolutely for you.

Note that the recipe I use calls for a high speed blender, which can grind sesame seeds with zucchini easily and create a thick texture (I like thick hummus). This isn’t necessary; you can also use tahini in place of sesame seeds in a regular blender, or you can follow my food processor option below the main recipe. 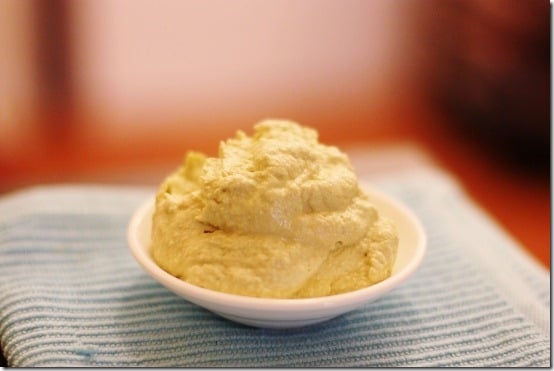 1) Place ingredients in a high speed blender (like a Vitamix) set to manual speed, with zucchini at the bottom. Begin blending at low speed, using the plunger to help get everything going. As the mixture blends, you can turn the speed up, until eventually the whole mixture is blending smoothly.

1) Instead of chopping zucchini, shred it using the processor’s shredder attachment. Turn shredded zucchini into a bowl, and use paper towel or a clean dish cloth to squeeze out as much of the natural moisture as you can.

The food processor option will yield thinner hummus, but it will still taste great; this is how I made raw hummus for over a year before I got my Vita-Mix!

Check out the smooth, fluffy texture of this hummus: 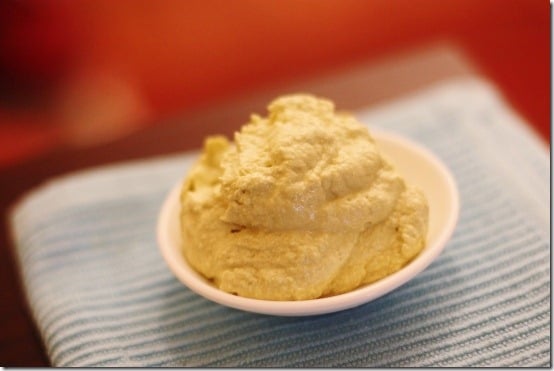 I typically enjoy mine in raw wraps of some variety. The other day, I stuffed it into romaine leaves and ate them along with a giant salad: 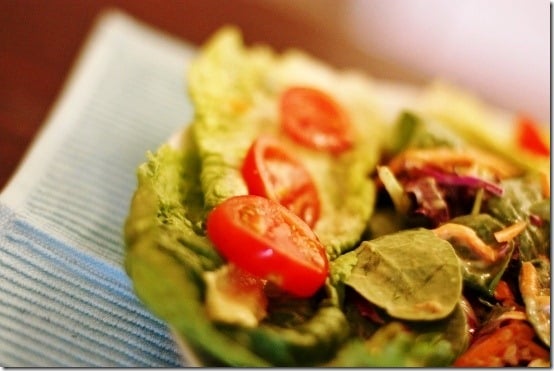 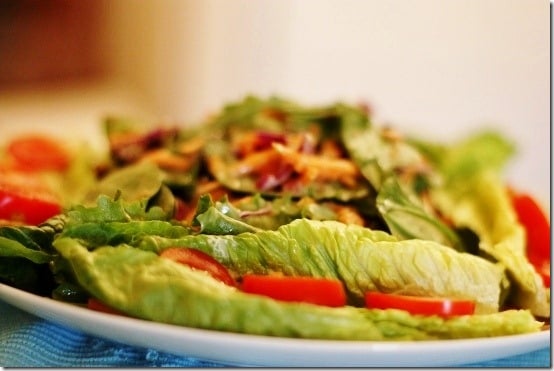 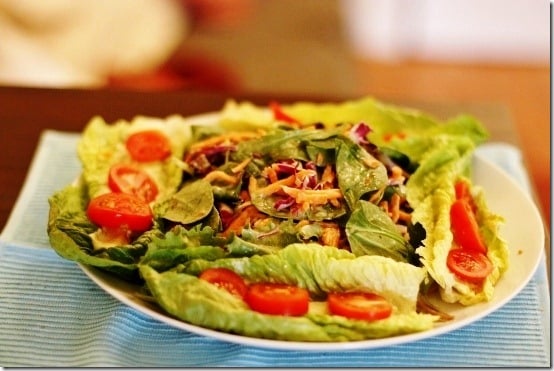 Hope you give this raw foods classic a try soon. In the meantime, what recipe have you rediscovered lately? Have you changed it at all since you originally made it?