Cream of Broccoli and Quinoa Soup
3.90 from 10 votes
Jump to Recipe

This plant-based cream of broccoli and quinoa soup is a great way to get tons of nutrition (and eat your broccoli) in comfort food form.

This cream of broccoli and quinoa soup is a perfect balance between comforting and wholesome!

This isn’t a soup recipe that I planned on. But I got carried away when I saw heads of perfect, bright green broccoli at the farmer’s market. I somehow ended up bringing home three pounds of broccoli, at which point I’d need to do more than steam or roast it.

The beauty of adding whole grains to soups

This cream of broccoli and quinoa soup proves that there’s a lot to be said for stirring a whole grain into a soup. Think of it as you would serving soup with toast. It’s a starchy component that adds density and satiety to the meal.

Speaking of starch, this soup is delightfully creamy in spite of the fact that there is no dairy involved. This is thanks to the addition of russet potatoes and quinoa, which thicken and enrich the mixture. I added the cooked quinoa to the soup, and I also topped all of my bowls with a heaping spoonful.

The star of the recipe, of course! Fresh is really nice here—it makes the soup more vibrant, green, and flavorful—but frozen broccoli is also fine if that’s what you have. Be sure to defrost it according to package instructions before proceeding with the recipe.

I really like the delicate texture of cooked quinoa in this cream of broccoli and quinoa soup, but you can substitute another grain if you prefer. Cooked rice and millet both work very well as an addition to soup. Barley would also be a nice, toothsome touch.

This isn’t supposed to be a cheesy broccoli soup, but I still enjoy the addition of some nutritional yeast here. It adds just a hint of cheesy flavor, along with umami and depth that the soup wouldn’t have otherwise.

As I said, the soup will have lots of creaminess thanks to the grain and potato. But if you’d like to make it just a little bit richer, cashew cream is the way to go. You can find my go-to, all purpose cashew cream here. And if you don’t have that, you can try a tablespoon or two of vegan sour cream or unsweetened vegan yogurt.

I have to admit, I’m not always that careful when it comes to pairing potato varieties to a recipe. I used russet potatoes in this recipe, but creamer potatoes (Yukon gold or red skinned) should also work well!

Toppings are what make an otherwise simple, nutritious soup like this come to mind. Some of my favorite ideas for this cream of broccoli and quinoa soup include smoky tempeh strips, coconut bacon, toasted pepitas, an extra swirl of cashew cream or a dollop of cashew cheese, extra cooked quinoa, or even crispy, roasted broccoli florets. 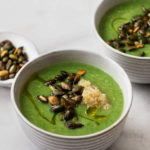 Cream of Broccoli and Quinoa Soup

Storing and freezing cream of broccoli and quinoa soup

Like most of my soup recipes, this one can be frozen for up to six weeks. If you don’t need to freeze it, it’ll keep in an airtight container in the fridge for up to five days after preparation. Any toppings you plan to serve with the soup—vegan bacon, extra quinoa, etc.—should be stored separately.

Whether you make a fully loaded version of this soup with all the fixings, or you simply stick to a bare bones version, you’ll love the simple-yet-satisfying flavors. It’s really great comfort food, especially as we move into the colder months. Hope you enjoy it.