I’ve got my fingers crossed that you aren’t quite sick of Power Plates recipes yet—I know I’ve written about a few this summer—because there’s one more that I’ve been keen on sharing.

This creamy brown rice with shiitakes & peas is a dish that both Ashley and I have made again and again since we first made it together while we were shooting photos for the book. It’s so comforting and versatile, easy to pair with a big salad for an easy supper or to serve as a flavorful side. And even though slightly cooler weather is stoking my interest in cooking again, this is one of the few recipes I’ve craved and made consistently all through the summer.

The dish is risotto-like, but I think that the texture is a little lighter. I originally thought of it as being a spring dish, perfect to make when peas were in season, I’ve now made it with frozen peas at all times of year. The mushrooms give it a little earthiness to offset the lightness of the rest of the dish, and you could easily make it even more filling by adding some smoked tofu or tempeh bacon or vegan sausage. You can also try it with barley or farro or oat groats for a slightly denser texture—I love how it turns out with barley! 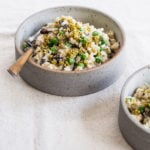 For the cashew cream:

The method I use for the rice here is one I learned from Saveur, and it’s been my go-to ever since; I find that my brown rice is so much fluffier and more tender when I boil and drain it this way, as if it were pasta. If you’ve got a tried and true method for rice cooking, though—or a rice cooker that does a great job—don’t let me stop you!

I’ve spent a lot of time with Power Plates in the last few weeks, and it’s been a sweet, nostalgic journey. Even though the book was only published six months ago, it’s been in my life for so much longer, first as an idea and then as something I worked on incrementally as grad school began. Revisiting the recipes feels a lot like spending time with old friends at this point, and I’m having a fun time bookmarking the ones I think will be realistic/doable on weeknights with my new schedule this year.

This brown rice dish is one of them (especially if I’m organized enough to cook the rice in advance, which will be anyone’s guess), and I hope you’ll like it as much as I do. See you on Sunday with the usual weekend musings, and for now, be well.