These crispy baked vegan candied pecans are the best I’ve ever had! A mixture of aquafaba and powdered sugar, plus oven baking, is key to achieving a super light and crispy (not sticky!) texture. The candied pecans are great for snacking, to use in recipes, or to give as holiday gifts.

One month ago would have been such a perfect time to publish this post.

I did actually make these wonderful, crispy vegan candied pecans in advance of Christmas. My neighbor received some, and so did a few yoga friends. I enjoyed snacking on them and crumbling them into my salads.

I didn’t, however, get around to writing about them before the holidays had come and gone.

To write about them now is, I guess, a perfect expression of where I am lately: embracing the philosophy that things take as long as they take, and perfect is the enemy of good.

But while we’re on the topic of perfection, I have to say that these are just about the most perfect vegan candied nuts I’ve had, let alone made myself.

Today, I’m finally sitting down to tell you about them.

When I made this recipe, it was not my first go-around with homemade, vegan candied nuts.

Actually, I’ve made a bunch of candied nut recipes through the years, using all sorts of nuts (and sometimes seeds).

I always ended up with the same issue, which is that the nuts were crispy when they first emerged from the oven. After a few days, though, they lost some of their crunch.

It was discouraging. The thing that I like about candied nuts is a light, very crispy texture.

It’s that crispy texture that makes it fun to find candied nuts in a big, soft, leafy green salad. And I think that it’s what makes candied nuts nice for snacking, too.

When I first tested this recipe, I wasn’t sure it would be any different. Then I realized that most non-vegan candied nut recipes call for beaten egg whites.

I had tried vegan candied pecans with flax egg and various combinations of vegetable oil and sweetener. But I’d never tested one with aquafaba, which is arguably the most egg-like vegan egg.

That was my first big breakthrough. Breakthrough #2 was to use powdered, or confectioners, sugar.

Liquid sweeteners were the least successful. Each batch of candied nuts I made ended up sticky. Cane and brown sugar were a little better, but crispy texture didn’t last long.

It was this article by David Lebovitz that convinced me to give powdered sugar a try.

That move, combined with aquafaba, was the game changer.

I needed to tinker around with seasonings a bit, but the texture of my vegan candied pecans with aquafaba + powdered sugar was perfectly crispy on the first try.

Best of all, the candied nuts remained light and shatteringly crisp at the surface through their whole storage time (not that they lasted long). I didn’t even have to think about transferring them back to the oven for re-crisping.

And they weren’t even a little bit sticky.

Mid-January, it’s no big deal to turn on the oven. Come summertime, it may be less appealing.

So, I wondered whether it might be worthy making the candied pecans in a frying pan or skillet, rather than baking them.

I tested both methods—low and slow in a skillet vs baking—and baking was by far the winner for crispy texture.

It’s certainly possible to make candied pecans on the stovetop, and I don’t discourage anyone from experimenting with that cooking method.

But if a crispy texture is your objective, then I recommend oven baking. Added bonus? It’s more time-consuming than stovetop cooking, but it’s more hands-off!

How to make the best, most crispy vegan candied pecans

The crispiest and most salty-sweet pecan halves come together with little fuss. Here are the steps.

In step 1, you’ll drain the liquid from a can of chickpeas.

Low sodium chickpeas are best, so that the salty flavor of their chickpea brine doesn’t interfere with this recipe (or any other).

However, I’ve used plenty of aquafaba that came from chickpeas not labeled as low-sodium, and the aquafaba did its job. I simply had to adjust other salt in the recipe.

Aquafaba can be stored in an airtight container in the fridge for up to four days once opened, and it can be frozen for up to 8 weeks.

In step 2, you’ll mix your lightly beaten aquafaba (this sounds fancier than it is—basically, you whip aquafaba with a whisk till frothy) with some seasonings.

For this recipe, I use cinnamon, salt, chili powder, and sugar.

The sugar needs to be powdered sugar. I know that I’ll get some questions about whether a different type of sugar can be used for these vegan candied pecans.

Technically, you can, but if you want the candied nuts to be crispy, then you’ll be proceeding at your own risk.

I tested the recipe with both brown and cane sugar, and both worked well from a flavor perspective. However, neither of the two resulted in pecan halves that had a crispy texture and crackle at the surface.

Only powdered, also known as confectioners, sugar did that. If you have some, or if you can easily get it, I recommend using it!

In this step, you’ll simply mix your pecan halves with the sugar and seasoning mixture. I do this with a spatula.

Mixing should take a full minute or two, so that all pecan halves are well-coated.

You’ll want to bake them on a baking sheet that’s lined with parchment or silpat (even if your sheet is nonstick).

I also recommend stirring them every 10 minutes. This will help them to brown evenly in the oven.

The pecan halves are ready when they’re a deep brown and smelling a bit toasted.

I can’t emphasize strongly enough how important it is to allow them to cool entirely before putting them into an airtight storage container for storage.

If you do that while the nuts are still warm, they’ll essentially steam in their container. This will soften them and disrupt their lovely, crispy, sugary coating!

Allow the pecans to cool for at least a few hours before breaking them apart and storing or eating them.

I season the candied pecans with cinnamon, salt, and chili powder.

For me, the chili adds spice without adding heat. Combined with cinnamon, it gives the candied pecans some savory notes without making them overly savory or spicy.

If you love heat, then you could certainly add a pinch of ground cayenne pepper to this recipe.

You could also experiment with allspice, cloves, cumin, coriander, or Chinese five spice. There’s a lot of space to play and have fun with the flavors of this recipe!

How long do the vegan candied pecans last?

They’ll keep in an airtight container—crispy the entire time!—for up to two weeks. However, my experience is that the nuts are too tasty and enticing to store for very long.

Using other types of nuts

Could you use cashews in this recipe? Almonds? Walnuts?

The answer to the last of those three options is most definitely a yes. In fact, tomorrow I’ll share the candied walnut version of this same recipe.

Candied walnuts and almonds will also work with the method I shared above. Just keep in mind that they both have a harder texture than walnuts and pecans, which have some buttery softness.

I think that the capacity of both walnuts and pecans to remain tender while crisping at the surface makes them especially nice for a candied preparation.

The benefits of pecans

Speaking of, what’s nutritious and special about pecans?

For one thing, pecans are packed with heart-healthy monounsaturated fats and protein. These fats can help to keep us full after meals.

Pecans are also a good source of fiber, and they boast flavonoids. These flavonoids, which are also found in coffee, tea, onions, kale, grapes and red wine, and berries, may have a protective effect when it comes to heart health.

Finally, pecans contain a trio of minerals—manganese, copper, and zinc—that are important for health. Zinc in particular plays an important role in immune function.

What should I do with vegan candied pecans?

Technically, you don’t have to do anything with these lovely, salty, sweet, and savory nuts. They’re delicious to snack on, and I find them very satisfying, too.

If you don’t want to snack on them, you can try one of the following uses:

If you weren’t a candied nut enthusiast before, then I hope you feel inspired to play with these vegan candied pecan halves a little bit now.

I have a hunch that you won’t be sorry to have a batch at home! 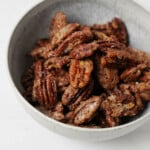 Even so, it can be fun to satisfy my sweet tooth with something a little different. Candied nuts were a really nice, sweet addition to my December, and I look forward to bringing them into 2023 with me.

Hope you’ll find the texture of these candied pecans to be as impressive as I have! Let me know, and I hope you’ll enjoy them.