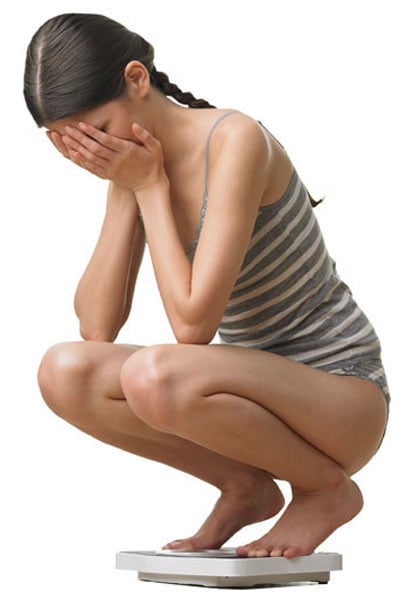 It’s already Thursday? This week has been intense, but (thankfully) swift.

I’d like to call all of your attention to Abby Ellin‘s thought-provoking and candid article in Monday’s Times about the way scientists and doctors are being forced to refine the language they use to classify eating disorders. The jist of the article is this: the majority of eating disorders do not, contrary to common belief, fall into the neat categories of either anorexia or bulimia. Nor can they always be classified by the standard criteria of disordered eating: low body weight (85% or less than the minimum of the normal BMI range), loss of menstrual period, hair loss, skin dryness, weakness, terror of weight gain, and body dysmorphia. Women with disordered eating may display some of these symptoms, but they often don’t present with low body weight or amenorrhea; conversely, there are women with low BMIs who are more sound in their eating patterns and psychology than women who have a normal body weight, but deeply disordered behavior and psychological patterns.

Most eating disorders, in fact, can be classified as Ednos, or “eating disorder not otherwise specified.” The problem with this vague classification is that it’s too broad and too variable for most doctors to cope with or understand. Ellin writes,

“For now, though, Ednos remains the nation’s most common eating disorder. A September 2009 study in The International Journal of Eating Disorders found that Ednos was often a way station between an eating disorder and recovery or, less commonly, from recovery to a full-blown eating disorder.

While traveling with a scale in your backpack is not one of the criteria, preoccupation with weight and food is. So are severe chronic dieting, frequent overeating, night eating syndrome, purging disorder and possibly compulsive exercising. If that sounds a little vague — find me one woman who isn’t preoccupied with her body size — psychologists make a distinction.

“The eating has to be disordered in some way, as does the behavior relating to eating,” said Ruth H. Striegel-Moore, a professor of psychology at Montana State University. “Also, it has to lead to some kind of impairment. For instance, some women will not go to parties because they’re worried about eating.

“If you’re restricting yourself so much that it affects your work negatively, you would meet the criteria for Ednos.”

Even so, many clinicians say the diagnosis is just too roomy.”

I’m thrilled that attention is being called to the slipperiness of the language we use to talk about disordered eating. A great many of my female clients are women who either do, or used to suffer from disordered eating patterns. Unfortunately, many of them have a hard time even uttering the words “eating disorder.” This is sometimes because they have yet to come to terms with it, but most often because they feel ashamed of using the expression to describe behavior that didn’t meet worst case scenario standards. They’ll be quick to remind me that they were “never skeletal,” never in in-patient, never near death.

But of course, that doesn’t mean they didn’t have eating disorders.

Many of these women struggle terribly to accept their bodies; many had severe body dysmorphia. Many never lost periods, but did lost significant amounts of weight; many describe years or even decades of utter fixation on food, fear of eating in public places, attachment to food routines and habits, or binge and restriction cycles. Many overate and abused laxatives subsequently, or exercised to burn off their closely tabulated caloric intakes. In short, they had habits that, while not necessarily “enough” to classify as anorexia or bulimia by medical standards, were absolutely disordered. And the fact that they never hit rock bottom doesn’t mean that they did not suffer.

Clearly, the time has come for us to redefine the standards we use to diagnose disordered eating. Eating disorders do, it’s true, manifest themselves in a set of real symptoms: weight loss, cold, weakness, cachexia, fainting, hair loss. But they also manifest themselves as ways of thinking and being: fixation with one’s daily weight; fear of being wrested from one’s food habits; binging and purging; obsession with food, meal planning, and calorie counting, laxative abuse, over exercising, and so much more. Body dysmorphia, of course. The less we acknowledge that eating disorders are a frame of mind, as well as a set of physical symptoms, the more we do a disservice to the many women and men who are suffering. This is not only because we invalidate people’s concern for themselves–that is, we encourage women who are developing disordered eating patterns to ignore the problem because they aren’t necessarily matching clinical criteria–but also because we supply eating disorder sufferers with an excuse to ignore the issue. Alcoholics are famous for pointing out that they’re “not as bad” as so-and-so (the guy who passes out or falls over drunk); people with eating disorders will often justify their behaviors by thinking “it’s not as though I’m skeletal, like that girl who had to go to the clinic for a month of school last year.”

If you or a loved one is showing any signs of truly disordered psychology about food–fear, anxiety, strange and socially isolating habits, etc.–please don’t be afraid to speak the words “disordered eating” aloud. Of course, most women struggle with low self-esteem at some point in their lives, and it’s wrong to liberally diagnose everyone as an eating disorder candidate. But use your gut: if you believe that your fixation with weight or food has surpassed the norm, realize that you deserve help. Just because you haven’t reached worst-case-scenario depths, it doesn’t mean that you can’t, or won’t. Now’s the time to face the problem.

It’s never easy to say the words “eating disorder” — or to say them about someone you love. They’re scary words, loaded with overly rigid associations. But fearing the language, or avoiding it because you don’t seem to fit a textbook definition, may keep you a step away from healing. Forget the image that “eating disorder” conjures up in your mind; anyone who suffers from disordered ways of thinking about food is worthy of help and compassion. We all deserve self-care.

Phew. Thanks for bearing with that sermon. I really encourage you all to read the article.

And when you’re done, and you want to read something lighter, check out this fun article, in which I’m interviewed by Mimi for her college newspaper. It was a delight to connect with her!

Have a great night.