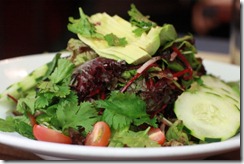 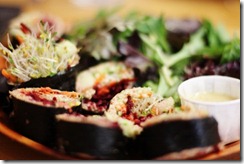 I’m here with the fourth submission in my Green Recovery series, which I invite you all to read about here. Newcomers, this series is intended to shed light on some of the connections between plant based diets and redefining one’s relationship with food after eating disorder recovery. Today, I welcome Daphne Cheng, co-founder of Verite Catering and former CR interviewee. Daphne’s ED and recovery story is particularly harrowing, but her journey into veganism post-recovery has clearly helped her to think differently about the food on her plate. I’ve had the pleasure of meeting this gracious, mature, and intelligent young lady in person many times, so it’s an honor to feature her story today! 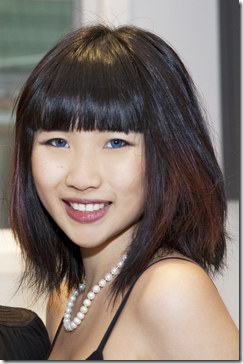 I joined in with the chorus of laughter, if only to pretend I wasn’t hurt by some innocent teasing. It was innocent, wasn’t it? So why, one year later, in 7th grade, was I still repeating those words to myself, and asking, “Why did she call me a pregnant pineapple? Do I really look pregnant?” My parents certainly seemed to think so, and didn’t mind reiterating the sentiment to me.

I caved. The constant scrutiny of and commentary about my body was too much to handle. I started dieting.

To my delight, the pounds dropped off easily, and I became addicted to losing more. Ana (anorexia) took over my life, though I denied her existence. I ignored schoolwork and friends as I obsessively searched the internet for weight-loss tips. I could never stop thinking about food: how much of it I’d eaten that day, how much more of it I could eat, how to avoid it without raising suspicions…it seemed as though my chatty brain was making up for an empty and idle mouth. The tickle of hunger became my only pleasure. I grinned as that tickle gave way to pain, and felt superior to anyone who succumbed to his or her taste buds. I was good at dieting. Just too good.

Despite my weight loss triumphs (or so I thought of them), the flood of self-criticism continued. Affixed to the mirror (or any reflection), I inspected my body constantly, fuming at the sight of any excess flesh. With time, suicidal thoughts emerged; I would have died to escape my imperfect body.

I developed many destructive habits, but one ultimately saved me. Obsessed with losing weight, I had spent hours upon hours searching the internet, until one search led me to “pro-ana” websites. They were sites created by fellow ED sufferers who sought support and validation for their behavior, but had no desire to recover. Others may have found “thinspiration” at such sites, but I finally woke up to the danger I was putting myself in. The pictures of emaciated girls flaunting their illness were horrifying. Their eyes were devoid of life; their jagged bones stuck out of such odd places, and it looked to me as though it must have been painful for them just to breathe. I dug out recent pictures of myself, and finally saw that I looked just like them. I was nothing but skin and bones.

Even after this revelation, I had trouble convincing myself to gain the weight I so awfully needed. It was a persistent battle between, “You need the nutrients; go ahead and eat some more,” and “You’re getting fat! Stop stuffing your miserable face!” Having alienated my friends, I could no longer turn to them for help, so motivation could only come from within.

Fortunately, as I began to recover, the internet presented another gift to me: veganism. I saw shocking footage of animals in slaughterhouses, and could no longer justify eating meat. I developed a new framework, in which consideration for the origins and ethics of my food was more important than its caloric value, and I began to relax my stringent eating habits. I started preparing my own meals, and found it unexpectedly enjoyable. Such intimate contact with food captivated me; squishing a soft, juicy mango with my hands was inexplicably therapeutic. With this new infatuation, I gradually returned to a healthy weight, in spite of much resistance from Ana.

Although it almost took my life, the eating disorder has left me with a certain peace of mind. Where I was once lost and unsure of myself, my experience with an ED helped me to uncover my fervor for gastronomy, nutrition, and conviction about animal welfare. Where I was once insecure and shy, I have gained enough self-respect not to starve myself in order to impress others, and I have become more sociable. Now I focus on maintaining my health, rather than worrying about the number on the scale.

After seven years as a vegan, I can honestly say that I still struggle with body image issues every now and then, but I feel that eating a plant-based diet has played a significant role in preventing a relapse when things are difficult. Knowing that the food I eat is health-supporting keeps irrational fear of food at bay. Plant based diet was an essential part of recovery for me because it enabled me to gradually welcome food back into my life. I felt that I didn’t have to worry about gaining weight too quickly or without care for my body, and I didn’t get scared back into disordered eating habits. Although many assume that becoming vegetarian/vegan is simply a way to cover up suspicious behaviors, I believe that it can be a beneficial road to recovery, though not the only one.

Thank you, Daphne! I want to highlight a few talking points from Daphne’s story.

First, reading this made me so glad that the internet wasn’t around when I first began flirting with disordered habits. I can only imagine how toxic pro-ana sites are for those who are suffering. Then again, I feel confident that certain blogs must also play a really crucial role in empowering girls (and boys, and men, and women) to be candid about their struggles and seek out a supportive community when they are ready to recover. Thoughts? Do you think the internet stands to do more harm or more good here?

Daphne and I had very similar experiences in so far as veganism helped us to channel some of the obsessive energy we had put into fretting about nutrition and calories into studying the origins, production, and ethics of food. I think we both also learned to study nutrition for the sake of health and well being, rather than weight loss (and by that I mean unnecessary weight loss). Some of my readers have expressed a discomfort with allowing any kind of food boundaries to persist after ED recovery—ethical, health oriented, or other—but of course I tend to believe that, for many, the vegan world view can be freeing, and so can an interest in health, so long as it’s genuine. In other words, not all forms of dietary selectivity are inherently at odds with recovery. What do you think?

Finally, I love that Daphne talks about how healing it was to become a cook (and since I’ve tasted her food, I can attest to what a talented cook she is!). I’m sure others have experienced this very phenomenon: I know that learning to cook was possibly the most crucial part of my effort to reframe and redefine my relationship with food. Who else feels this way?

It’s T minus five days to the big move. Gulp. As I hurry to get my shocking number of belongings into boxes, I remember a friend of mine who, upon taking a job in L.A., declared himself on a mission to check off every favorite restaurant from his NYC “bucket list.” I’m doing the same. In the past two weeks, I’ve furiously scrambled to eat at all of my favorite spots. Here’s where I’ve gone so far:

And here’s where I still need to go:

Do I think I’ll make it to all of these places? Doubtful. But a girl can try. Do I think I’ll blog about every visit? I know I won’t, because I’ve already forgotten my camera on numerous occasions. But I’ll share a bunch of my highlights. Let’s start with this lunch with my dear friend Diana at Bonobos:

The famous Bonobos kale salad, which is super sweet thanks to an agave-lemon dressing. I love it: 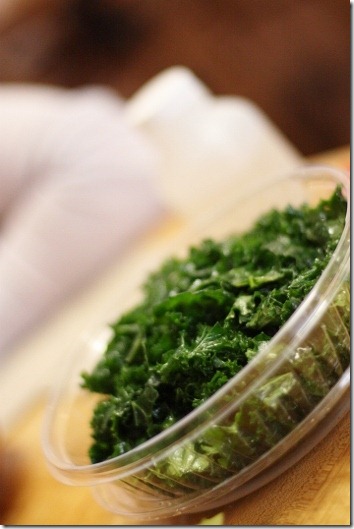 And a big plate of nori roll and salad: that’s walnut pate stuffed into a nori sheet along with carrots, beets, cucumber, sprouts, and zucchini: 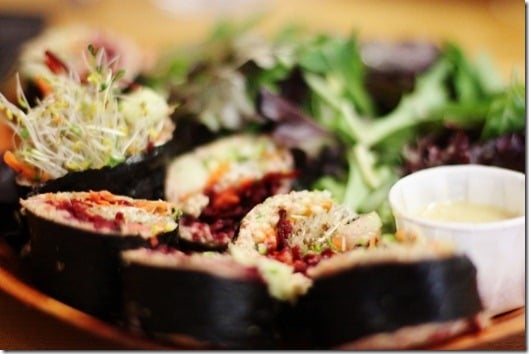 Such quintessential comfort food for me!

I also had a recent lunch at One Lucky Duck with my friend Kathleen, where I devoured a “make my own” salad of avocado, dulse, cucumber, beets, sprouts, raisins, cherry tomatoes, and cilantro: 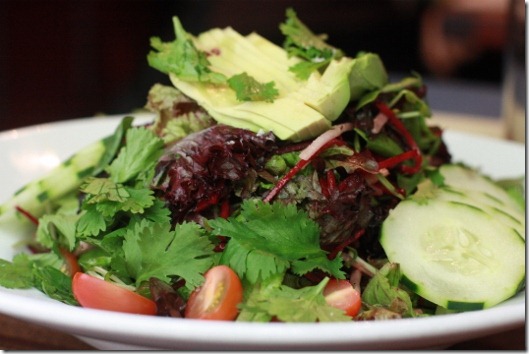 And since they’re my favorite, I decided to be greedy and also get an order of the jicama sushi (yes, I have a big of a raw sushi habit): 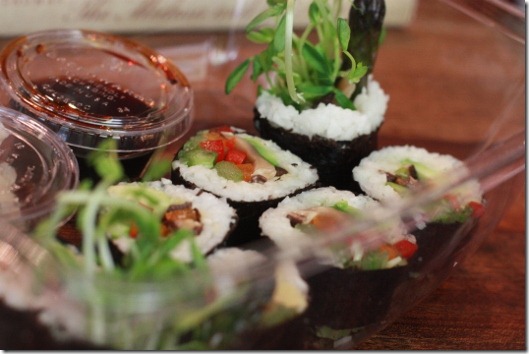 And did you really think I’d leave without having a side of the famous OLD guac? Nope: 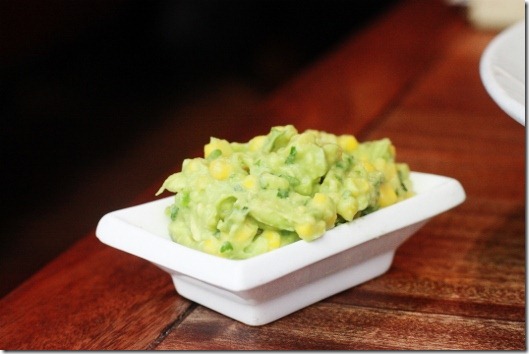 Two great lunches at two of my favorite raw, vegan lunch joints. I’ll miss these spots when I’m in DC…but I guess it’s all the more reason to visit