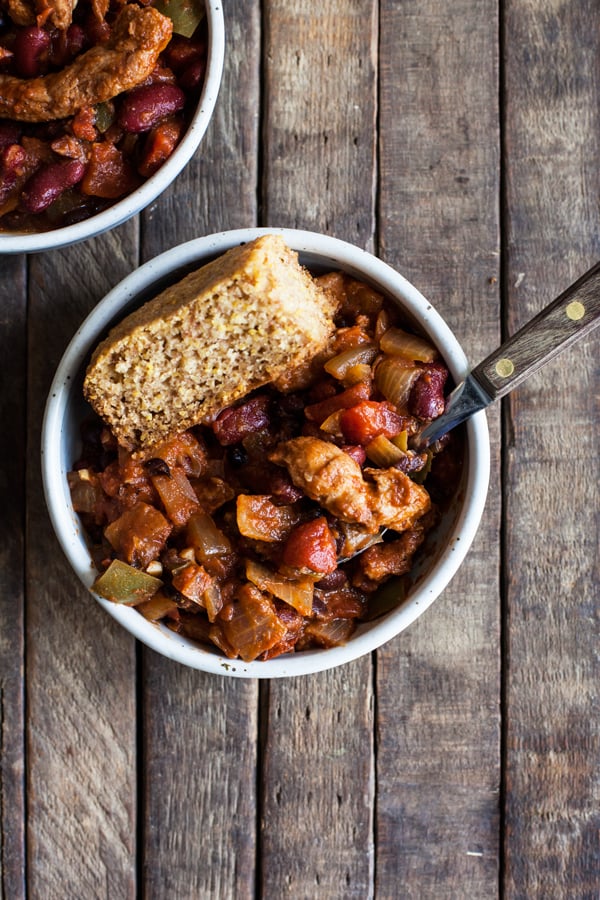 I spent my first year as a newbie vegan trying each and every one of the available plant proteins. Beans and tofu weren’t new to me, but the others were. In that year, I had my first bite of tempeh, made my first batch of from-scratch seitan, and played around with TVP. I also tried—and loved—soy curls.

In the years since, all of these new and exciting vegan proteins and products have come to life. I feel lucky to be around to see the emergence of delicious vegan sausages, chicken strips, beefy crumbles, artisan cheeses, and more. How cool to be vegan right now, with so many options already and so many more on the horizon.

Lately, though, I’ve been getting back to my roots, playing around more often with some of the foods I got to know early in my transition to a plant-based diet. It actually started with revisiting the 10th anniversary edition of Veganomicon; memories of kneading chickpea cutlets came flooding back, though I have to admit I never did a very good job with them. Anyway, I’m being reminded of how wonderfully economical proteins like seitan and TVP and soy curls are, and how versatile. 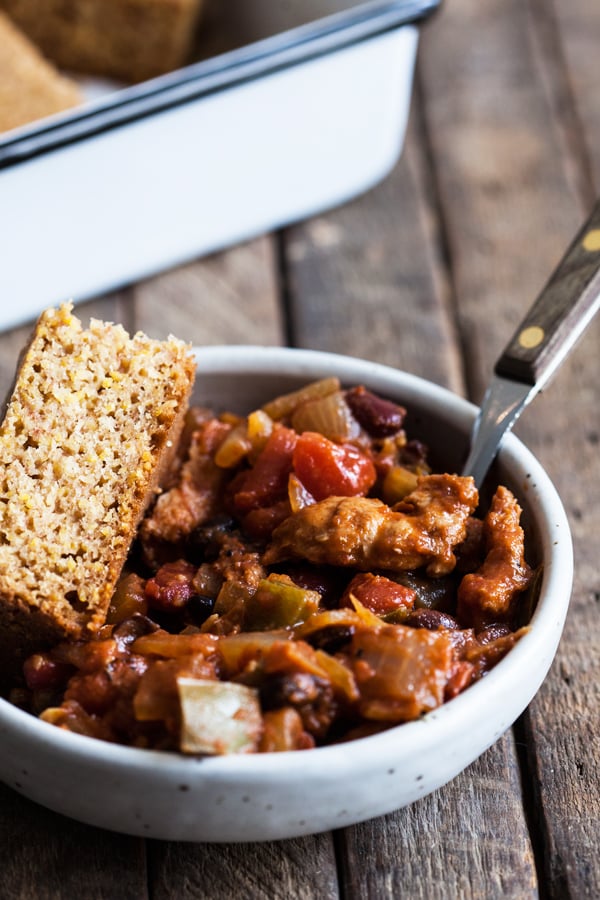 Soy curls have been a particular favorite lately, thanks to Ethan and Michael’s NYC Vegan. They have a bunch of excellent soy curl recipes, including a very simple vegan one for “chick’n style” soy curls (though I highly recommend their General Tso soy curls, too).

I started to play around with it, and I’ve since adjusted it slightly and turned it into a staple at home. There are many, many commercial vegan chick’n options these days, but for me, this one offers me the most bang for my buck: inexpensive, incredibly easy to prepare, and delicious. Thank you, Ethan and Michael!

A lot of times I just throw my chick’n style strips into bowls or salads or whatnot, but now that it’s chilly out, and I’m making all sorts of autumnal food, I’ve also been adding them to grain dishes and to soups/stews. I recently had a hankering for chili, and wondered if I could incorporate soy curls to it (chicken chili was always my preference to beef in the pre-gan days).

Once again, inspiration from the vegan community came to my rescue. I did a little poking around and found this fabulous recipe by Cadry. I decided to try it with my go-to chick’n soy curls, and I changed the bean/chick’n proportions around a bit. 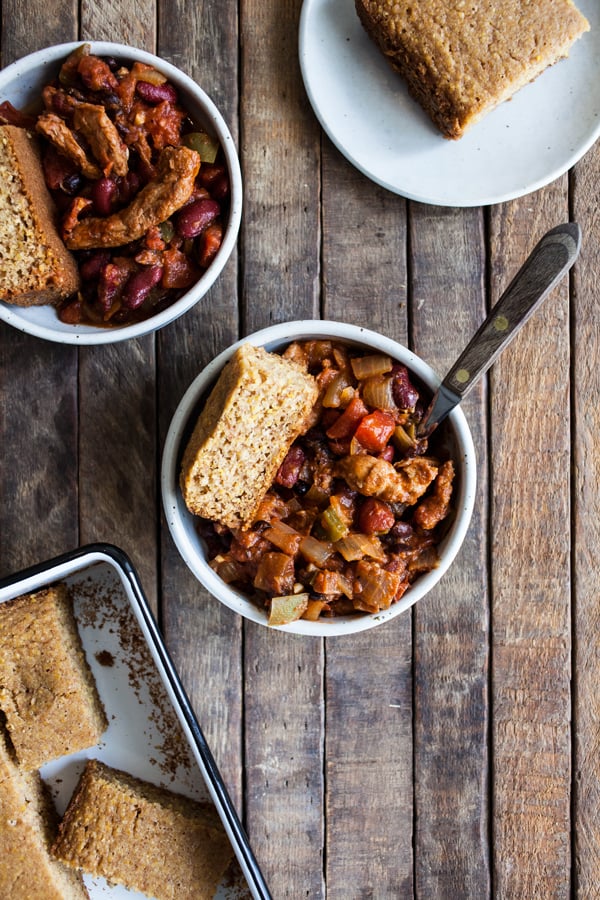 I wasn’t planning to share this one at first—it was just a bout of Saturday night comfort food cooking, guided by culinary friends. But it’s a keeper, and I think it deserves to live here. The chili has plenty of smoky flavor from smoked paprika, a touch of heat (which you could make hotter, if you like), and in spite of the fact that it doesn’t have any sweet potatoes—which many of my favorite vegan chilis do—it’s plenty hearty. It’s perfect for pairing with some cornbread (I used my go-to, staple whole grain vegan cornbread), or with rice or millet or whatnot. 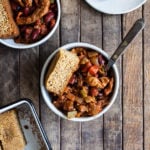 Leftover chili will keep in an airtight container in the fridge for up to 5 days. It can be frozen for up to 6 weeks. 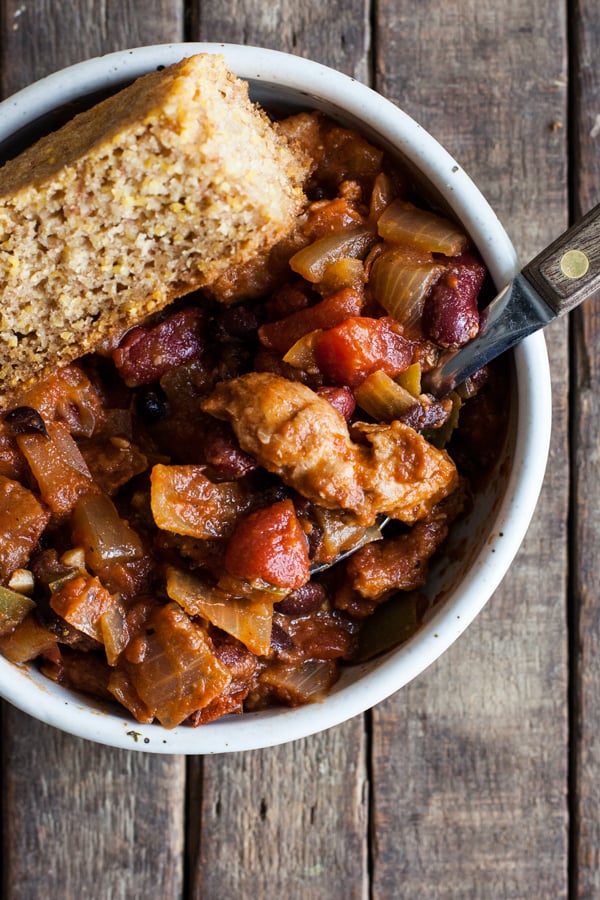 Soy curls can be hydrated simply, with hot water, before they’re added to recipes. Their flavor is very neutral, though, so I tend to have the best results when I season them a little (at least with salt) before stirring them into a dish. I also like to make a double batch of the chick’n style strips all at once, throwing some into a recipe and saving the rest for salad or for homemade vegan chick’n salad sandwiches.

If you’re curious about where to find soy curls, you can order them on Amazon or directly from the maker, Butler Foods, which offers some bulk deals and sells other vegan specialty foods. Depending on where you live, you may also be able to find them in health stores or specialty grocers. And it’s worth saying that you can also substitute seasoned tempeh, seitan or another vegan chick’n-style protein in the recipe, too.

I’ve been having batches of chili and cornbread for lunch since the weekend, and nothing could be more welcome. For whatever reason, I’ve felt a little “off-kilter” this week, and it’s a good time for old-fashioned vegan comfort food. Maybe you need the same, and if you try it, I hope the recipe does the trick.

On Friday, I’ll be back to share a healthful, flavorful, and vibrant recipe from Richa’s new book, and I’ll be around on Sunday for the usual roundup.