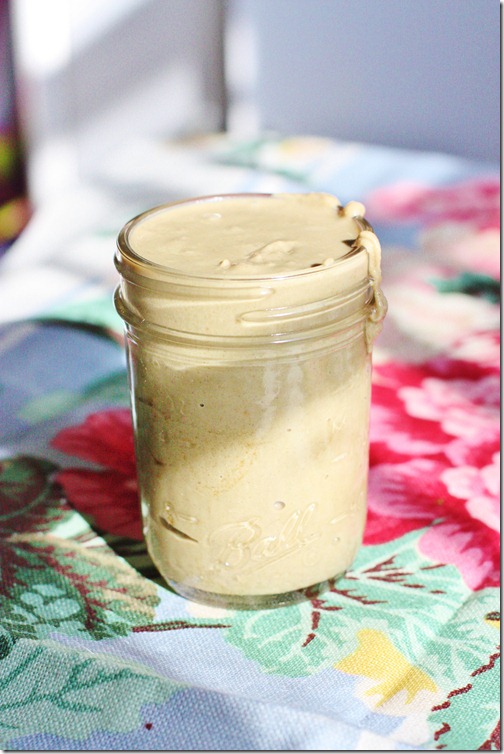 Ah, Sundays. They’ve always put me in a peculiar mood (the “Sunday blues,” as my mother and I call it), but for many years I was able to combat Sabbath Day ennui with a few pleasant traditions: quiet editing, fetching some particularly good morning coffee at Joe, and staying abreast of world events (or at least the style section) with The New York Times. Nowadays, Sundays are typically full of school related deadline panic and lab reports. No fun, but in some ways it staves off the tendency toward melancholy reflection. And if I’m lucky, I can squeeze in a little cooking.

Last week, I mentioned sunflower seed butter on my blog (it’s my favorite, I alleged, which is true), and one of my readers asked me how I make mine. From scratch? Store bought? The truth is that I often purchase the Maranatha brand, which my lovely friend Kathleen introduced me to, or the Trader Joe’s brand. But I also love to make my own. In spite of the extra time involved, making homemade nut and seed butter is well worth it: you can modify the flavors however you like (maple syrup and cinnamon is a favorite combination of mine) and you can also work with the nuts and seeds you like best. I’m a sunflower seed fanatic, so it’s always one of my first choices. 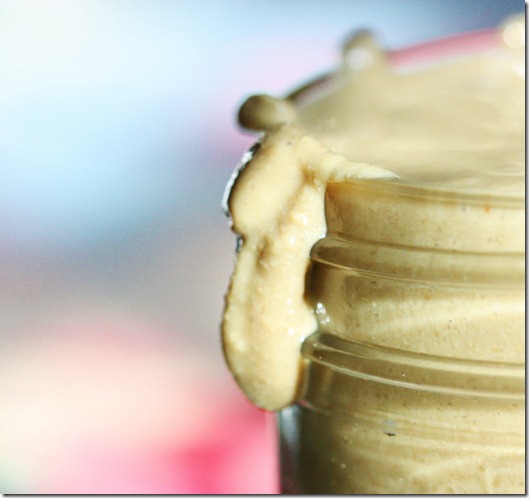 What makes sunflower seeds so great? For one thing, they’re packed with Vitamin E, which has anti-inflammatory, antioxidant, and cardiovascular benefits. For another, they’re loaded with Thiamine, which aids in proper brain function and metabolism of fats and protein. They’re also rich in magnesium, an essential electrolyte, and they’re full of heart-healthy fat. From a purely practical perspective, they’re quite a bit cheaper than cashews (another favorite), which makes them ideal for students. And on top of all this, they are appropriate alternatives for some people who have tree nut allergies.

As you’ll see, this recipe calls for roasting your sunflower seeds. This is a big no-no among strict raw foodists, who often believe that roasting any type of nut or seed causes it to go rancid or lose health properties. Thus far, I haven’t found much mainstream literature to prove this claim, unless the nuts or seeds in question were rancid to start with (which is why it’s a great idea to store nuts and seeds in the freezer). I have, however, found numerous studies which suggest that roasting cashews and pistachios can actually enhance their antioxidative (read: anti-aging) properties, and that roasting has no effect on the polyphenols (a class of antioxidants) in walnuts.

When all is said and done, I think it’s OK to eat a mixture of raw and toasted nuts and seeds. In salads, dressings, and desserts, not to mention when I make nut milks or seed milks, I prefer raw. When it comes to making a delicious nut or seed butter, I get roasting. The following recipe is really designed for roasted sunflower seeds, which release their oils and turn into butter more easily, so don’t try it with raw seeds unless you’ve had success in the past. Trust me on this one—the taste and overall effect of the recipe will make you feel that the roasting was worth it, even if you’re usually a raw nut and seed fanatic. 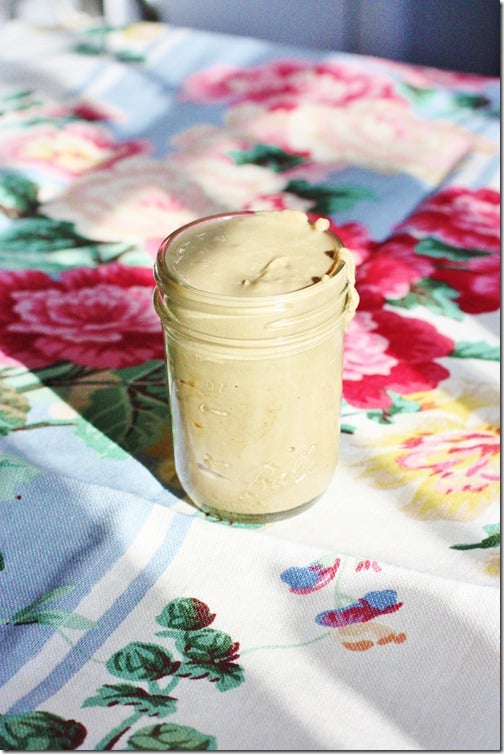 1) Preheat oven to 350 degrees Fahrenheit. Line a baking sheet with aluminum foil, and spread seeds on it. Sprinkle with sea salt, and bake for 8 minutes or so. Move seeds around with a spatula, and keep baking for another 4-5 minutes. If at any point the seeds go from pleasantly golden to burnt, take them out immediately; time may vary based upon your oven.

2) Allow seeds to cool until room temperature. Place in a food processor fitted with the S blade, and turn the processor on. Walk away for about ten minutes. Yes: ten whole minutes.

3) After ten minutes, check on your seed butter. It will most likely be in the “awkward phase” of nut butter making: this is when it looks like a thick paste, rather than a smooth nut butter, and it seems as though it’ll never reach a good consistency. Just keep waiting. At a certain point, enough natural oil will be released, and the mixture will start to get loose again. Trust me. This could take another 5 minutes, or even a little more.

4) As soon as the seed butter looks like normal seed butter, add the sugar and vanilla. Taste and adjust sweetness; try not to devour all at once. This stuff is just blissful. 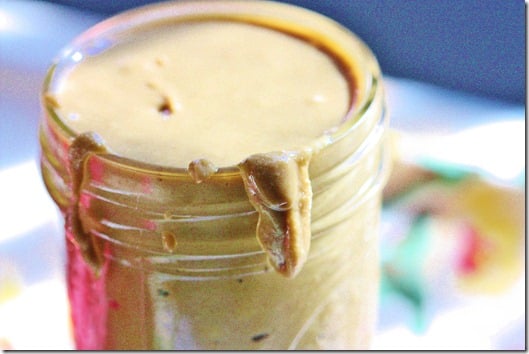 It’s a bit sweeter and saltier than normal nut or seed butter—decadence is the point of this recipe—so you can probably use a little less of it than you normally might. The flavor goes a long way. Put it in PB+J sandwiches, spread it on fresh fruit, or do as I did, and mix some into a bowl of berry banana oat bran: 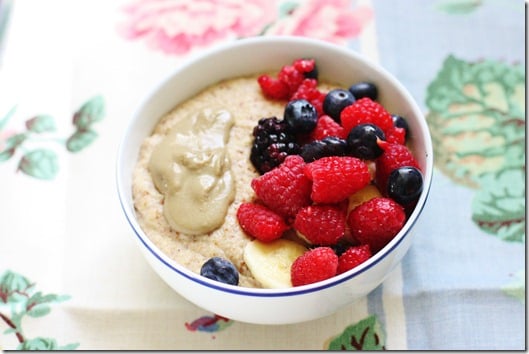 Hope you all get to experience this delicious spread for yourselves soon. As with homemade almond milk making, you won’t save too much money by making your own, but you will certainly get a chance to enhance taste, and you’ll have the sense of pride that can only come with DIY food projects!

So before I go, how many of you have seen the new PETA “my boyfriend went vegan” ad? If you haven’t yet, you can view it here. Given the longish post on PCRM’s new campaign that I did a few weeks ago, I don’t want to tire you all out by writing endlessly on this one. But I did want to bring it up, because a few of you have asked me what my thoughts are by email.

Well, I think it’s sexist, and I think it makes PETA—and by extension, vegans—look pretty desperate. Given all of the horrors of factory farming, not to mention the destruction that animal agriculture wreaks on our planet, I don’t think we need to use harmful messages about sex and gender to advocate for the vegan diet: we can simply use common sense facts. There are so many troublesome stereotypes alive in this ad: the idea that men must be physically aggressive in order to be sexy or masculine; the idea that women are passive recipients of sex, rather than active participants; the idea that women should do their boyfriends’ grocery shopping for them, to name only a few. And of course, there’s the disturbing implication of domestic violence.

The ad has caused a lot of outrage, but it has also elicited quite a few responses of “lighten up, it’s just an ad. If it appeals to some guys, who cares if it’s a little offensive?” The trouble here is that these ads are directed to teenagers, who are often impressionable. I realize that it can be very, very hard for young men to adopt an ethical diet when they’re likely to be told that they’re not “real men.” And I do appreciate that these ads are trying to boost the self-esteem and confidence of teenage boys who want to go vegan. But, in putting forth the sad notion that masculinty resides in sexual aggression, they’re also reinforcing a culture in which we allow popular stereotypes to dictate our understanding of what is and isn’t manly. And that is the very culture in which it’s OK to mock a man for going vegan in the first place. It’s a vicious cycle.

Think of it this way: how would we all feel if the ads portrayed companion animals who had clearly been the victims of physical aggression? If they featured limping or wounded cats or dogs, or farm animals in braces—even if they did it in a way that was meant to be funny? I doubt that many vegans would say “hey, it’s just an ad.” I think we’d feel discomfort, because we’d worry that the ads might subtly influence the way people think about animals—not as equals who are worthy of respect, but rather as inferiors whom we can push around. Reverence for all animals (human and non-human) is at the heart of the vegan message. And there are ways to advocate for the lifestyle without betraying that reverence.

PETA tirelessly crusades against animal testing, vivisection, dog fighting, and many other kinds of animal cruelty. I hope that their future ads manage to appeal to young people without reinforcing aggression or sexism. By all means, let’s try to reach young men. But let’s not do it at the expense of young women.

In the meantime, for a meditation on masculinity and compassion read the brilliant James McWilliams’s new essay on hunting. He says, “our culture—in so many ways so advanced and so enlightened—has yet to promote the idea that it’s extremely attractive for a man to love and nurture animals.”

What do you all think of the new ad? And more importantly, what do you think of delicious sunflower seed butter? As always, dying to know.