This homemade vegan liquid egg will be your secret weapon for plant-based omelets, breakfast sandwiches, and scrambles! It features simple, nutritious ingredients and can be stored for a few days in the fridge.

Recently, I wrote about vegan meal prep breakfasts. It made me think about the fact that my own breakfasts have been a little repetitive lately.

That’s a norm for me in the summer. When tomatoes are perfect, all I seem to want are bagels or toast with hummus or avocado and thick, juicy slices of tomato on top.

When the weather cools down, though, I start to think about cozy oat bakes and dishes of savory breakfast hash. And of course, there’s always tofu scramble.

For convenience and easy protein, I sometimes pick up the Just Egg liquid or folded vegan eggs. I like to use the liquid for omelets and the folded version in breakfast sandwiches.

Since the store-bought, liquid vegan egg is pretty pricey, I figured it was time to experiment with a homemade alternative.

I’m so happy that this recipe worked out as well as it did.

How to make liquid vegan egg

The first challenge that I faced was to make the liquid vegan egg with simple, accessible, and nutritious ingredients.

I settled on some of the components that I’ve used for scrambles and egg-like dishes before: tofu (in this case, silken tofu), chickpea flour, nutritional yeast, and black salt.

Tofu gives the liquid egg its protein, as well as some of its texture and strength.

Chickpea flour helps to bind the mixture together. It also contributes protein, as well as some savory flavor. In fact, I’ve used chickpea flour for a breakfast scramble that has no tofu at all—it’s soy free.

Black salt, which is also called kala namak, has a high sulfur content. For this reason, it also has an “eggy” flavor and scent. It’s not mandatory for this recipe if you can’t find it.

However, you can order it online, and it’s a handy ingredient to have at home for any plant-based dish that is inspired by a traditional egg dish.

The great thing about this recipe is that it’s really as simple as blending ingredients together.

You can use a food processor or a blender for the task. Either will work.

Once that’s done, you have a liquid “egg” that can be cooked in a few different ways.

How to use vegan liquid egg

Once the vegan egg is ready, there are a few uses for it that I know of already.

I say this because I only made the liquid egg for the first time a month or so ago. I’m still discovering all of the different ways I can use it!

I’ll update the uses below as I come up with more and can offer instructions for them.

Most of the time, I like to cook it over low heat in a skillet. I use about a half cup of the mixture to make one disc-shaped serving.

The liquid egg will take longer in your skillet than does store-bought, liquid vegan egg. Be patient! It’ll need about 4 minutes for the first side, 2-3 minutes for the second.

Add your 1/2 cup of liquid egg to a skillet over medium low heat. Flip it over once the top is looking almost entirely set—and not until that point. The disc will get damaged if you flip too soon.

At this point, you can add filling ingredients to the center and make a lovely little omelet. Lately, I like to add sliced mushrooms and spinach that I sauté ahead of time and some Good Planet vegan cheese shreds.

You can also take the disk and fold it up. Once folded, it’s the perfect protein for a vegan breakfast sandwich!

Make your egg sandwich on toast, a toasted English muffin, or a roll. Add a slice of vegan cheese or some of my homemade yellow cheese sauce.

You could also add a slice of Tofurky ham or a vegan sausage patty here. I love the sausage patties from Field Roast.

You can also go for something a little fresher and more summery by adding sliced avocado, tomato, and sprouts.

No matter what, you have a great little breakfast sandwich on your hands.

If you don’t want to make a set disk, you can also scramble the mixture over low heat. Once again, I use a half cup of the mixture at a time.

Because the homemade liquid egg cooks more slowly than Just Egg, it takes longer to scramble. Again, be patient, and use a spatula to gently move it and stir it once you see parts that are solidifying.

By the time you finish, you’ll have a tasty, homemade scramble to work with.

I like folding cooked, leftover vegetables into my scramble. It’s a good place to incorporate your leftover broccoli florets or cooked greens.

What kind of cookware should I use?

This is an important question!

The best way to cook the liquid vegan egg is with nonstick cookware. Doing so will ensure the smoothest flipping and scrambling. It will also allow you to cook the vegan egg without needing to add any oil, or only a small amount of oil.

I’m a huge fan of Caraway’s non-toxic, nonstick ceramic cookware set and bakeware set. I use the fry pan for this recipe, but you can of course use any nonstick pan that you love.

You can also use well-seasoned cast iron or a stainless steel pan to prepare the vegan liquid egg. Just be sure to add some oil or vegan butter to prevent sticking.

And again, if you make an omelet or disk, be sure to let each side of your disc cook till set before flipping.

One of the cool things about the liquid egg is that you can prepare it, pour it into a large mason jar, and store it in the fridge for up to 3 days.

Give it a good shake, then use it by the half-cupful as needed.

You can also make disks of the vegan egg for breakfast sandwiches and store them in an airtight container in the fridge for up to 5 days.

You can freeze the disks for up to 6 weeks.

If you love savory breakfast fare, and this post has you excited about it, here are a few more recipes to explore: 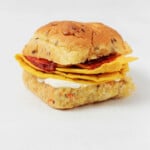 I’m so excited about all of the possibilities of this tasty, nutritious, and versatile concoction. And I’ll continue to share with you about how I end up using it.

Hope you’ll find some good uses for it, too!