Eggplant Tortilla Pizza
No ratings yet
Jump to Recipe

This vegan eggplant tortilla pizza is perfect for a nutritious plant-based lunch! It’s made with a creamy eggplant spread that’s reminiscent of baba ganoush, peppery arugula, and fresh or roasted red pepper strips.

Wow! Thanks for such great feedback on my homemade vegan creamer! I had no idea that so many others were curious about making a really tasty vegan replacement, too. I also appreciate the tips about TJ’s creamer, hempmilk, and mimicreme! I’ll have to check them out.

Today, I’m back with yet another speedy post. These days, my desire for good taste from my food is rivaled only by my need for meals to be quick and have shorter ingredient lists. As you all know, I was very impressed by my pizza at Graffiato on Friday, and I decided to re-create a shortcut version. This quick eggplant, pepper, and arugula tortilla pizza is my super speedy tribute to the dish–and I think it captures the flavor nicely!

It was the soft, chewy crust that made this pizza truly outstanding, but what I also liked was the fact that it was covered in a roast eggplant puree, rather than old-fashioned red sauce, and then a layer of roasted red peppers, crispy arugula, and lemon. Just the kind of bright flavors and foods that appeal to me.

With far less time on my hands than it would take to knead pizza dough and allow it to rise, I decided to whip up my own version of this pizza yesterday, with two important modifications:

1. Raw peppers instead of roasted. I think roasted peppers would be divine here, but I really love the crunch of raw! And I love the speed of chopping and serving, rather than roasting. Additionally, the water-soluble Vitamin C in the peppers may be present in greater amounts when the peppers are consumed raw.

2. I used an Ezekiel tortilla in lieu of dough. Making homemade pizza dough is a real joy if you have a knack for it. I don’t, alas–or at least I won’t until I have a little more practice–so this is an easy alternative.

The eggplant spread in this recipe is sorta like baba ganoush. But it’s non-authentic in that I didn’t char the eggplant over a flame to cook.

That said, it’s easier for me to simply roast the eggplant and get moving, so that’s how I typically cook my baba. Again, the theme of my culinary life right now is healthy shortcuts! 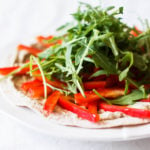 For the eggplant spread:

The eggplant dip will make about 1 1/2-2 cups. It can be stored in an airtight container in the fridge for up to 5 days. Use it as a dip, a spread, or a topping for a bowl!

This cheater’s “pizza” is so good. You can also wrap the tortilla up, and serve this as a wrap, rather than a pizza. Your call! I love that the pizza is piled high with green. Such a healthy homage to comfort food, and—making the baba ganoush aside—it takes minutes to assemble.

Hope you try and love it soon. Till tomorrow, friends!