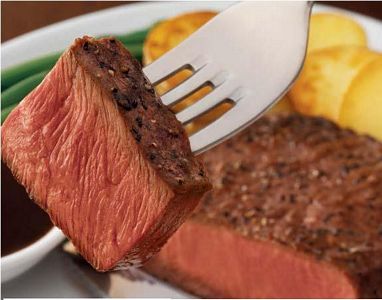 I’m glad you guys enjoyed the video. To clarify, my friend Ben who sent me the link is not the fellow in the video. But he may very well now wish he owned a pair of monkey boxers, too.

I’ve spent the last day or two mulling over a very thought-provoking note I received from a friend last week. She was recently diagnosed with Celiac disease, and on top of this, she has been making efforts to cut meat and dairy out of her diet (and I should add that she’s doing an absolutely terrific job!). She feels great, but she’s running into some of the predictable social scenarios that face us when we choose to change our diets. In her own words:

“I’ve decided that not eating animal derivatives at a meal is akin to turning down alcohol at a college party—it seems to make people feel guilty for their own consumption and many are unable to accept that someone’s choice not to consume something is as natural as their own choice to consume it. They get pushy or argumentative or tell me that I must be going through a phase and should just give it up sooner rather than later. I can’t tell you how upset my decision seems to be making everyone! Everyone except me, that is. I’m quite satisfied!”

I could not have summed the reality of these situations more astutely or succinctly. Regardless of what sort of diet you eat, there is a very good chance you’ve come crashing up against this situation before—at a party, a dinner with friends, a family reunion, or happy hour. Somehow, a small change (or set of changes) in your lifestyle manages to totally unnerve people. And as a result, they’ll be quick to judge, snicker at, or attack you.

When I became a vegan, I was shocked at the level of discomfort that my lifestyle seemed to provoke in other people. I was expecting curiosity, ignorance, and perhaps some teasing. But I was astounded to find that not eating animal products could provoke so much hostility.

I shouldn’t have been. It was all a repetition of the antagonism I encountered when I started to cut back on drinking in my early twenties (and later, when I gave it booze completely). Certain “friends” seemed personally offended that I wasn’t interested in drinking or getting drunk anymore—so much so that my sobriety became a marked source of tension between us. As uncomfortable as this was, it didn’t take me too long to assess what was going on: the fact that drinking didn’t interest me anymore was making these friends wonder why, with college a few years behind us, drinking still interested them so much. This was never a problem with friends who had a healthy relationship with alcohol and still isn’t; they didn’t care that I wasn’t drinking, and why should they have? They drank moderately and happily and for the right reasons, so they had no reason to be discomfited by someone who had a different sort of relationship with the sauce. But there were a few friends and acquaintances who seemed disproportionately put off, and it goes without saying that they were the ones who seemed to drink too much, or for too long, or too often, or perhaps out of social pressure.

This is not a complicated or revelatory psychological lesson: peer pressure and teasing (not to mention bigotry and hate) are nearly always the by-products of insecurity. We all know this. Even so, it can be downright astounding to see how poignant this tendency becomes within the realm of food. I’ve been blessed with a group of friends who won’t and don’t pass judgment on the way I eat (just as I never pass judgment on them), but I have come across a fair bit of animosity with new acquaintances and family members. And it’s no fun—especially if you’re doing your best to talk about your lifestyle choices in a fair, open-minded, and enthusiastic way.

The hostility you encounter might take one of many forms. It might be teasing: you might get flack for being a “hippie,” or “crunchy,” or asked, as I was once, when you planned on investing in Birkenstocks (for the record? I got my first pair this year. I feel OK about it so far.). It might take the form of downright hostility. And it might take my favorite form, akin to the ole “C’mon, just one drink!” refrain, which is “Come on. Why won’t you have just one bite??”—set to the motion of someone shoving a forkful of food at you.

My best advice for a scenario like this is for you to remember what’s really going on. Divest the situation of its discomfort, and consider the obvious: clearly, your choice to make any kind of healthy change (be it dietary, drinking-related, or a lifestyle choice, like quitting smoking or starting to work out), is forcing someone else to take a tough look at his or her own choices. And that person doesn’t like what he or she sees. This is too bad—as I hope you all sense by now, I feel very distressed when anyone feels guilty or insecure about food. Food is to be enjoyed, not lamented. But someone else’s insecurity simply isn’t your problem, and it is especially not your problem if they happen to foist it onto you in the form of anger or derision.

If someone seems simply baffled by your lifestyle choice, try to explain it succinctly and with lots of warmth and enthusiasm. Don’t account for your decision by rattling off facts or statistics or stuff you’ve read in books—that’s unnecessary, and it will immediately make other people adopt a defensive posture. Instead, focus on yourself and your personal health: say how great eating vegetarian, not drinking, practicing yoga, or not combining proteins and starches makes you feel. Say it with a smile and a sense of self-assurance, and I guarantee that you won’t hear another peep.

With those who are being unkind, on the other hand, try to diffuse the situation quickly and assertively. Just say, “I’m really happy with [insert name of lifestyle choice here], so I’d prefer not to discuss it any further”—or something along those lines.

And if all that fails? Break out the brutal honesty. The last time I heard “why won’t you just have a bite?!” I countered with a very gentle and deadpan, “Why is it so important to you that I eat a bite of the food you’re eating?”

I’m so glad that my friend has the self-assurance and intelligence to separate her feelings of personal satisfaction from her feelings of social acceptance or approbation. This is hard for many women (and some men, too!). But believe me when I say that it is a skill that can be easily learned. Stick to your convictions, whatever they may be.

Have a great evening.