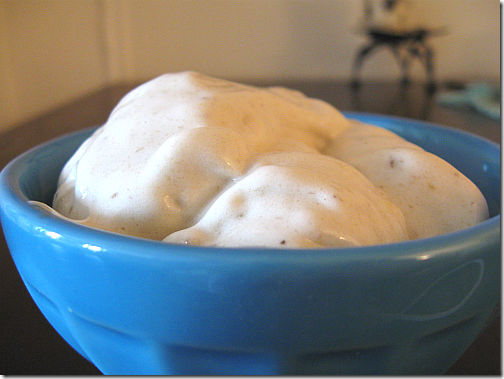 A few weeks ago, one of my readers emailed me with a very good question. “I know you call yourself ‘semi-raw’ or ‘mostly raw’” she said. “But are you ever semi-vegan?” She went on to say that, in spite of being mostly vegan, she finds that there are certain things—ice cream, for example—that just aren’t as enticing in their vegan variations as the “real thing.” And she wonders how I deal with this: do I ever think it’s OK to “splurge,” as it were, on a non-vegan food?

Great question. Before I answer, let me say clearly that my response is personal, not prescriptive: I’m not telling anyone else how to be. I’ve experienced some discomfort among readers when they have the impression that I’m insisting that they follow a 100% vegan diet, so let me be clear: this blog does not exist to impose my mores upon other people. My goal is to foster curiosity about veganism among those of you who know nothing about it; to inspire those of you who are already interested to push your interest a little deeper; and to give those of you who are already vegan an online space in which to celebrate your lifestyle. Most of all, I try to incite thoughtfulness among all of my readers, and that means answering questions honestly.

The answer is no, I’m never semi-vegan. And the “why” is straightforward: it’s because veganism is primarily a moral question for me, and not a question of personal taste, preference, or health. I do believe that veganism is the healthiest lifestyle choice for me and countless others, and hope that I can be a champion of its health benefits, but that isn’t the main reason that I stick with it, even when I experience a craving for non-vegan food. I stick with it because I believe it’s the right thing to do. Asking me whether I’d be comfortable consciously consuming a little non-vegan food is akin to asking me whether I’d feel comfortable cheating a little, lying a little, or stealing a little: I wouldn’t. I’m human, of course, and I might do any of these things at any time, but I’d never aim to do them, nor would I do them without a sense of regret.

Being a raw eater is a defining part of who I am, but it doesn’t feel morally urgent to me: it’s something I do mostly because it makes me feel good. It’s a matter of preference, not a matter of necessity. When I don’t eat raw, I quickly feel sluggish and a little cranky, but that’s as bad as it gets: my health does not decline precipitously, and I don’t feel as though I’ve compromised my ethics. If I’m in a social setting or a travel setting with no raw options, I’m glad to eat cooked food.

If, on the other hand, I’m faced with a social scenario in which no vegan options are present, I’ll reach into my purse for a vegan snack bar, or I’ll find a piece of fruit until I can have a proper meal. Sure, it’ll be annoying, but that annoyance is pretty negligible in comparison to how I’ll feel if I stray from veganism simply to make my life easier.

Let me put it another way: on a few occasions in the last few years, I’ve smoked a cigarette. This hasn’t been a decision I felt good about, because of course it’s a health risk, but—putting aside for the sake of argument the fact that tobacco companies are very bad, and that smoking sets a poor example for others—I didn’t feel that I’d done something wrong when I smoked. I felt that I’d done something foolhardy with my own health, and I felt that it wouldn’t be repeated. This is how I’d feel, maybe, if I routinely ate things that weren’t healthy. But doing that wouldn’t feel like an ethical compromise: it would just feel unwise. To be cavalier with my own health is my prerogative, even if it’s foolish: to be cavalier about the lives of other living beings is quite a different matter. I have a responsibility to protect animals, even when I’m not protecting me.

Of course I value my health tremendously, and I avoid behavior that makes me feel poorly: it’s why I don’t drink very much, and why I’m not a smoker anymore, and why I savor a few squares of dark chocolate, rather than a few bars, and why I stop myself after my second cup of coffee each morning. It’s why I’m pursuing a career in medicine. But I, like most people, do sometimes put pleasure before health, and when I do, I don’t beat myself up about it. I think it’s easy for people to see my veganism as an extension of my healthy living habits, but that isn’t quite true: they’re related, but they’re not comparable in terms of their importance to me.

Naturally, these are only my thoughts on the matter; a person with a different set of ethics, who eats vegan primarily for the same reasons I eat mostly raw (health, energy, etc.) might treat the vegan diet similarly to how I treat the raw one: something that they do most of the time, but not all of the time. It’s just a different way of seeing this issue. I offer up my perspective because I think it actually might help new vegans who are changing their habits for ethical reasons to clarify what they are and aren’t comfortable with.

I should also add that, while it’s natural to feel that vegan products don’t match the “real thing,” a little mental readjustment can really ease the discomfort! I remember my longing for Greek yogurt distinctly, but it was soon mollified by a newfound love of thick, cold smoothies; I also remember thinking that butter was irreplaceable, until I discovered how magical it is to melt coconut butter on top of a baked potato. I was never much of a cheese lover, but Daiya has filled a necessary void in pastas and casseroles (like yesterday’s summer vegetable gratin) and hummus is so much better on a bagel than cream cheese ever could have been. And ice cream? Fugetaboutit. Banana soft serve is better, healthier, and easier to make from scratch than any carton of dairy ever was.

Sure, these foods aren’t exactly like the “real thing”; nothing is more annoying to me than when someone feels the need to say, “but banana soft serve isn’t really ice cream” or “this is good, but it’s not real cheese.” How astute. The point isn’t to mimic non-vegan food exactly, but rather to capture that food’s essence: it’s why a rich smoothie can evoke what Greek yogurt used to be for me, which was a thick canvas for granola or fresh berries. I understand completely the fond remembrance of once-loved foods, but I do believe that focusing on what a food gave you—texture, satiety, taste—rather than imitating it with precision, can be very freeing!

Hope this post gives you that proverbial “food for thought.” Again, everyone has different priorities when the dinner bell rings, but these particular distinctions are worth talking about. I’m curious to hear from vegan readers in particular here: do you find it hard to stick to the diet? How do you feel about exceptions? Do you think the distinction between self/other is urgent? And in general, I’d love to hear how all of my readers, no matter what the lifestyle, feel about the difference between food choices that are conditional, and those that are unwavering. What are you willing to be flexible about, and what aren’t you?