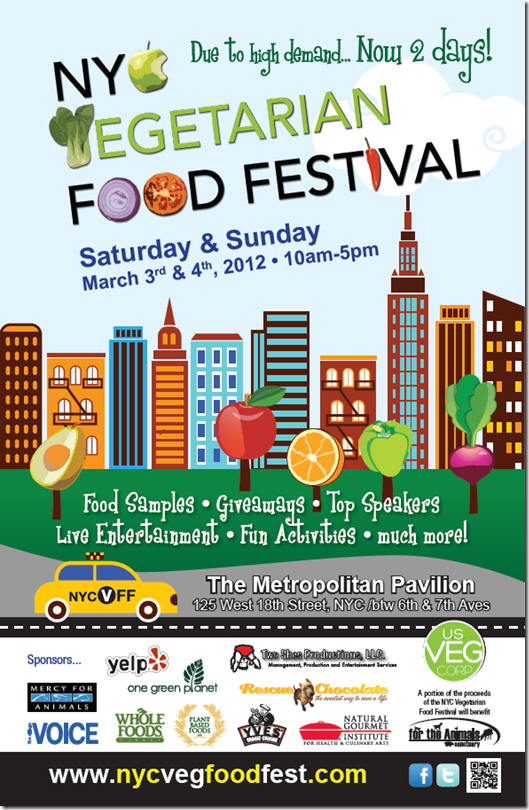 OK I’ll admit it: when I woke up yesterday morning, I wasn’t in the mood to speak at the NYC Vegetarian Food Festival. I was groggy and tired from a long week of school and a delayed Megabus ride. I didn’t feel like cutting my workout short. I didn’t feel like venturing out in the rain. I didn’t feel like being a glowy, upbeat, radiant spokesperson for the power of vegan and raw food. Instead, I felt like putting my dirty hair in a ponytail, keeping my yoga pants on all day, and reading a book. But I was scheduled to speak at 11 am, and so, with heavy feet and an umbrella at my side, I ventured down to 18th street.

Thinks started to look up as I hit the entrance of the festival, and immediately ran into my friend Matt, who was scheduled to speak a few hours after me, and had kindly arrived in time for my talk, along with his Mom! It was great to chat for a little while as we made our way inside, where I was immediately greeted with a sea of delicious vegan treats and beloved vendors. That was the moment when this sleepy blogger started to perk up.

As I arrived, the lovely Rebecca of Yummy Plants was speaking about her experience as a professional skater who improved performance through plant based diet. Rebecca’s website and community is a great starting point for those who are cautiously exploring vegan diets! I had about fifteen minutes before I had to hit the stage, so I wandered over to the Vegan Cuts booth, in order to visit two of my favorite people: Jill and John. 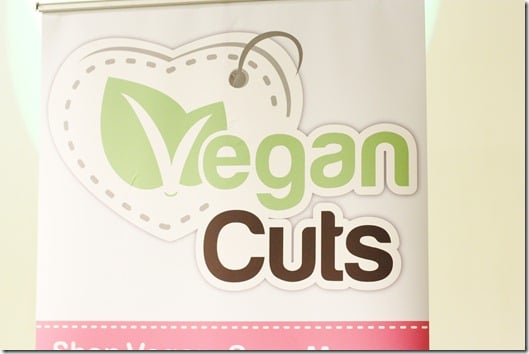 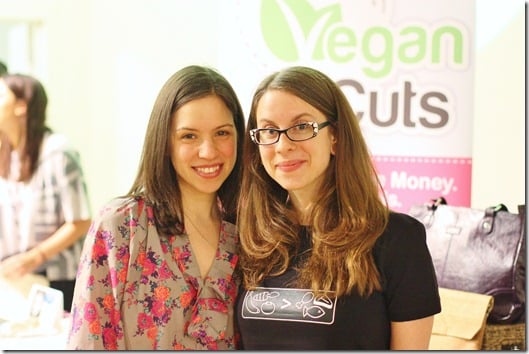 These two are so inspiring. Not only did they begin Vegan Cuts—which is essentially a Groupon-esque site featuring exclusively vegan companies—while they were also holding down other jobs, but now they’ve expanded it to be a vegan marketplace online. I am so excited about this new development, and will be keeping you all posted on raw and vegan deals that I think you’ll like! Jill is now working on the site full time, and she is literally bursting with excitement and inspiration and passion about this new chapter of her life. You can see it in her smile! And check out their tricked-out booth: 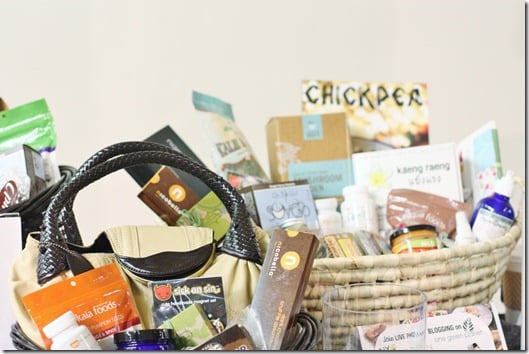 Most of these goodies will be available soon through the marketplace, so stay tuned!

I also caught up with the Sacha Vida folks. This is a DC-based company that sells nutrient-rich Sacha Inchi seeds and oil. Look forward to some upcoming collaborative posts with them! 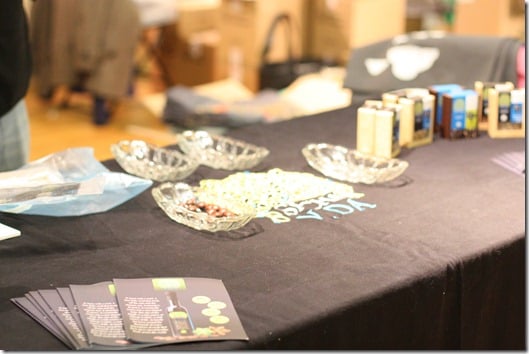 When I glanced at my watch, I realized I was supposed to be up on stage in two minutes. Oopsie. I scurried over to the speakers’ area, where the kind emcee intro’ed me. As usual, I didn’t really have an agenda or speech committed to memory: I’ve learned from past speaking engagements that you have to get a sense of what the audience wants before you can choose a particular focus, so I try to keep my talks really casual and interactive. My broad topic of the day was how to approach raw foods with an eye on practicality and science, rather than zealotry or perfectionism—the very thing I try to write about every day here at CR! And it seemed to go over really well. A few audience question highlights for you:

How do you make cashew cheese? I can’t get it right.

To this I immediately responded: “have you been using a Vitamix?” The answer, as I suspected, was “yes.” I find that cashew cheese in the Vita is tough to get right, unless you’re making a ton of volume and have the patience to plunge, plunge, and plunge some more with your plunger attachment. Even then, you need a lot of liquid to get it moving, and what you end up with is cashew cheese sauce, or ricotta at best. I highly recommend a food processor for nut cheeses, which will allow you to create a thicker consistency!!

I don’t always feel full after I eat raw foods. What should I do?

Add some cooked beans or grains! 1 cup of either or a mix of both can make an enormous difference in terms of satiety, and it will also boost the protein and/or complex carbs in your meal—both crucial for energy. Plus, you’ll still be eating an enormous plate of raw vegetables, and reaping all of the benefits thereto.

I’m allergic to tree nuts. How can I enjoy a raw diet?

I can’t eat grains. What are some grain-free breakfasts that you recommend?

What are your top tips for better digestion?

Great talk! The audience seemed to enjoy it, and many lingered around after for post-presentation questions. Before I knew it, my buddy Brendan took the stage: 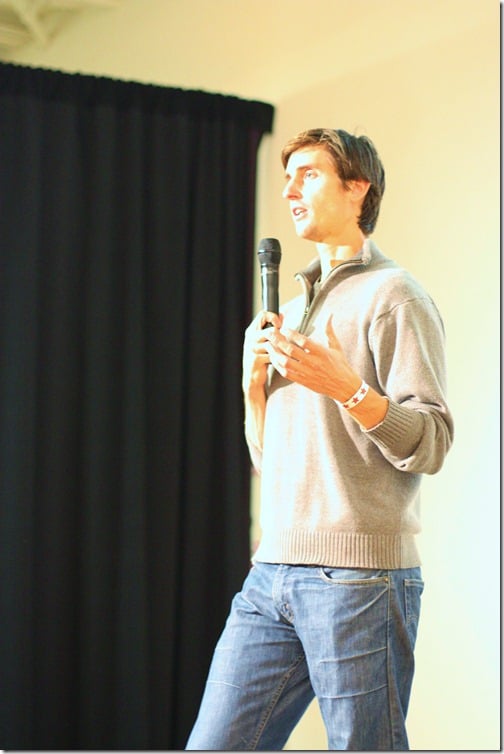 I’ve seen Brendan speak many times now, and he’s always very inspiring. He talks about how he found a whole-foods, plant-based diet, and he gives really useful tips for maintaining that diet healthily. One important thing Brendan always points out is that his first attempt to be vegan was a flop: he was tired, hungry, and he performed badly at track. What he realized was that his diet was low in iron, B-12, and essential fatty acids; when he increased those nutrients, he thrived. Many vegans experiment with the diet, hit a snag, and abandon it, assuming that veganism is inherently flawed, when in fact the issue was simply that they needed to tweak their approach. Brendan’s story is a perfect example of how much it pays off when you take the time to examine how you might approach veganism differently!

After this, I decided to escape outside for a little while for some lunch and fresh air. The food at the event was delicious, but I wasn’t really in the mood for a plate of vegan marshmellow and chocolate samples for lunch. Before I left, I ran into Sally and Kaitlyn. After many months of tweets and correspondence and comments, it was such a pleasure to say hi! Here’s a cute one of Kaitlyn and I: 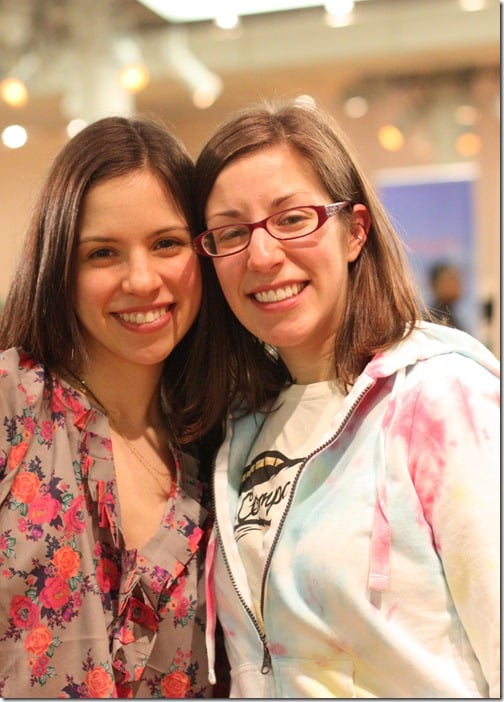 I was worried about getting back into the building, but as luck would have it, I literally bumped into Dr. Michael Greger (the hardest working man in nutrition science). He generously offered to lend me his speaker’s armband (somehow I’d forgotten to get one for myself). Thanks Dr. Greger!

With the armband fastened firmly around my wrist, I ventured out into the sunlight for a quick stroll through the Union Square Farmer’s market, which brought back memories of my old life at 19 Union Square West, FSG’s old location: 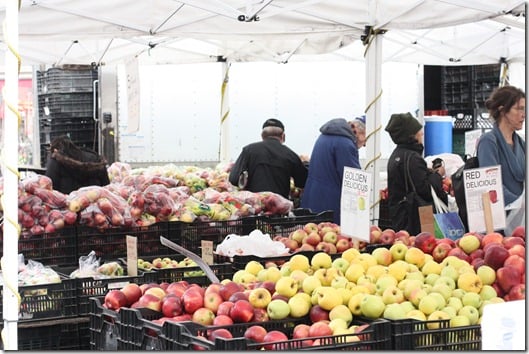 Then I stopped at Chop’t for a giant, green salad. 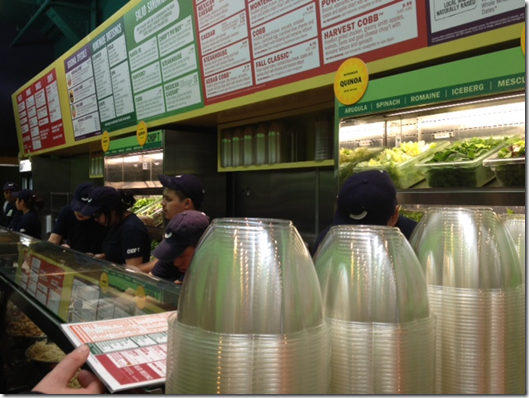 It’s not as good as Sweet Green, but it ain’t bad! I got a mixture of romaine, spinach, broccoli, carrots, garbanzos, avocado, asparagus, and cherry tomatoes, topped with a lemon/olive oil drizzle and a hint of sea salt. I also stopped by what used to be The Pump—now called Dig In—for a sorely needed green juice. I LOVE the green juice at this establishment: much like the “essential greens” at Juice Generation, it’s sweet enough, but still tastes more green than fruity. The cucumber, parsley, and kale are all very detectable! 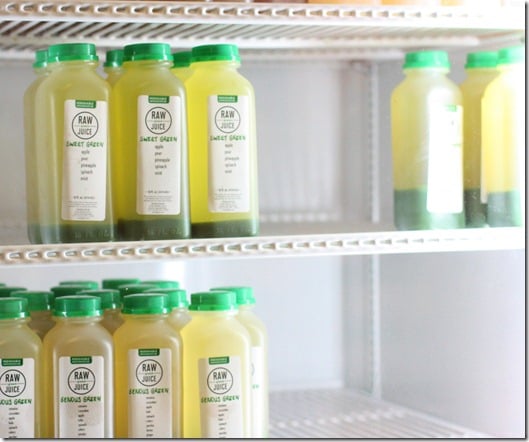 I got back just in time to hear Dr. Greger’s fun, informative presentation. He’s a very positive, engaging speaker! And unlike other vegan doctors I’ve seen, he doesn’t pummel his audience with guilt about their less stellar eating habits, or start cataloging their potential food addictions. He simply presents facts, all with a humorous tone.

As all this was going on, JL texted me to say she had arrived. Yes! Without wasting a moment, I raced over to the Sweet and Sara marshmallow booth (yum): 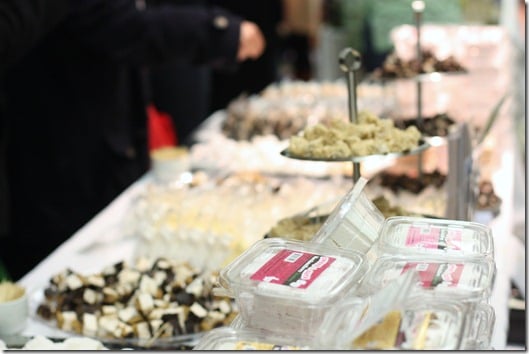 And proceeded to fling my arms around JL’s neck. 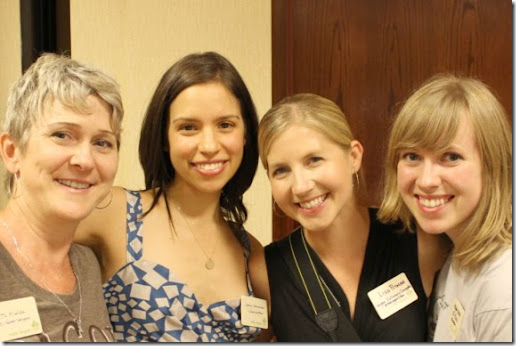 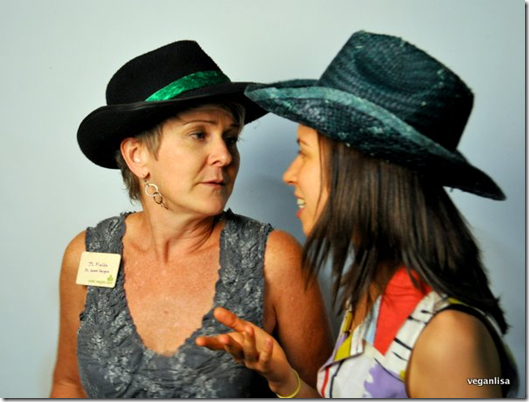 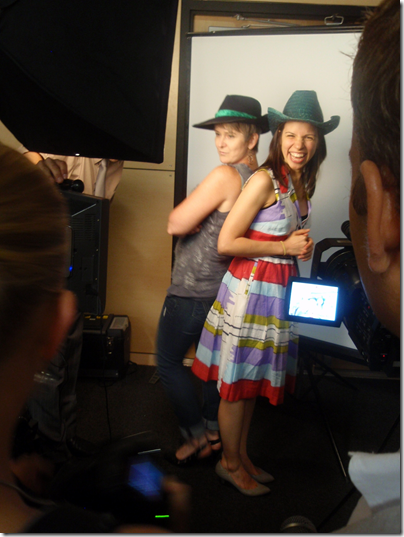 We quickly found a corner to sit in and gossip and catch up, as I ate my salad creation: 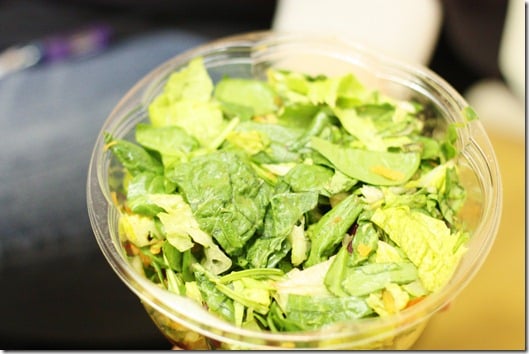 And we shared our news. Before I knew it, it was time to hear Matt speak! 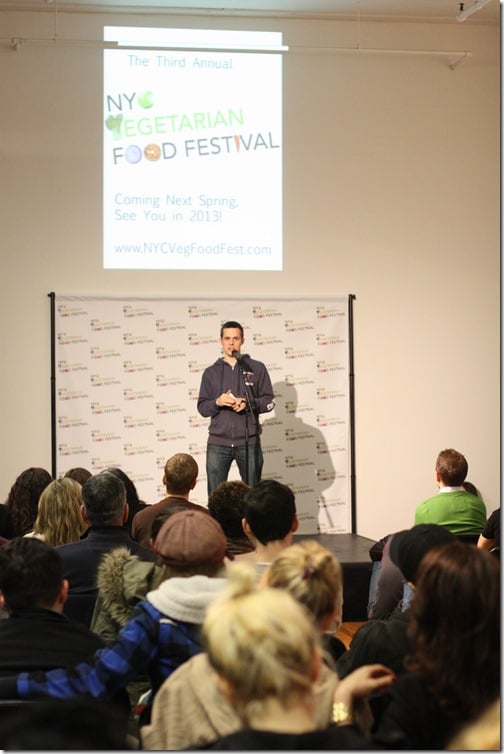 Matt is incredible. I mean it. In the last few years, this guy took 100 minutes off his marathon time to qualify for (and run) Boston, and eventually ran a 50-mile ultramarathon. He’s planning on running a 100 miler next summer, and in the meantime, he’s also a Dad, and he was until recently a calculus professor. Oh, and did I mention he’s vegan?

Matt’s main message is that he isn’t an elite athlete, and his running endurance isn’t an innate “gift.” As he says, “I’m a regular guy who just kept working until I achieved what I set out to do, and it ended up being something pretty incredible my most people’s standards (including mine).” And that’s the lesson he tries to share when he speaks publicly. Matt offers really accessible, realistic tips for budding athletes, empowers his audience to take the vegan plunge, and also has a lot of useful stuff to say about sharing one’s passions through social media, video, and blogging. I am always proud to see him speak!

By the end of Matt’s presentation, I was fading fast. It was time to head home for a nap. I bid adieu to JL and made my way out of the building. But not before catching a quick Vitamix demo! 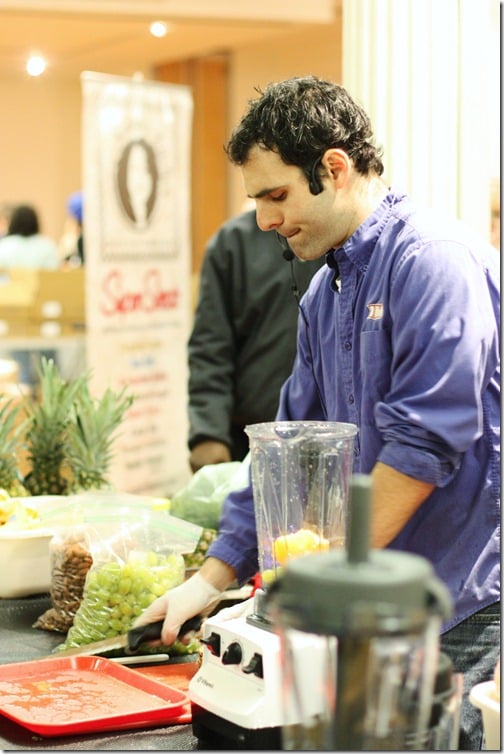 In all, I’m so glad that I mustered up my energy to experience the NYCVFF! It was a wonderful day, and I’m so glad I got to see Matt, Brendan, JL, Jill and John, my friend Dasha, my friend Cassie, my friend Craig, and the awesome One Green Planet team, who were tweeting up a storm. Thanks to everyone at the festival for having me come and speak, and I look forward to 2013!

And I look forward to seeing all of you back here tomorrow, when I’ll be writing from New Orleans. I’m overdue for some time with the bestie!