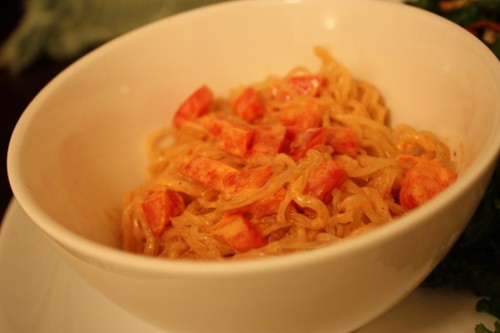 So happy you liked the cheesy red pepper hemp dip. I’m happy to report that I’ve been eating it virtually nonstop this week, and not only as a dip! This versatile dip/sauce/dressing has made its way into raw pasta dishes, a few wraps, a salad or two, and more than one snack plates since Monday. I love it, and I’ll be making a double batch on Sunday when I prep for next week.

Well over a year ago, I blogged about one of my favorite raw foods: kelp noodles. If you missed that post and you’ve never heard of kelp, let alone a kelp noodle, let me recap: Kelp noodles are made from all natural, raw kelp that has been stripped of its outer skin (leaving a clear, thin interior). They’re then preserved in sodium alginate, a natural salt that’s also seaweed derived. They require no heating, prepping, or soaking (unless you want to soak them), and they keep for up to six months in the packaging they’re sent in. Best of all? They’re crunchy, fresh tasting, and, unlike other sea veggies, they’re not at all “fishy.”

They taste so neutral, in fact, that they’re a downright ideal substitute for regular pasta. Unlike conventional pasta, however, they’re raw, vegan, gluten free, and boast all of the benefits of sea veggies, including thyroid function, metabolic support, and iodine (for more on my adoration of sea vegetables and some fun facts about iodine, check out this post). They also contain a surprising 15% of your DV of calcium! They are not, however, calorically dense (we’re talking 15 kcal for a serving), so you have to be sure, if you eat them, to eat them with a sauce or other food that provides some proper caloric density, or be mindful of it at other moments of the day.

You all know that I love my zucchini pasta, and I’m also very fond of many whole grain, vegan pastas, such as the Eden brand kamut spirals or the Tinkyada brand of rice pasta. But kelp noodles really might top my list. You can’t beat them for convenience — I can literally pull them out of the package and plate them — nor for texture and neutral taste. They’re also delicious boiled — they soften up, so anyone who isn’t into their usual crunch will find that they’re more palatable that way, if no longer technically “raw.”

The problem with kelp noodles is that they’re devilishly hard to find. I really prefer the Sea Tangle brand to all others, but I rarely ever see it in stores, so I always have to order online. And if you’re about to ask me how to get your hands on some of them, I have to give you the same advice: I don’t know of many stores that carry kelp noodles, so ordering them directly from Sea Tangle is probably your best bet.

Fortunately, I did happen to find kelp noodles at High Vibe this week. Ecstatic, I bought three package — kelp noodles for weeks! (That’s a lie: given how I eat, they’ll probably last me, oh, a couple days.) Last night, still in the first flush of love with my cheesy red pepper and hemp dip, I decided to use it as a noodle sauce. The result? This deliciousness: 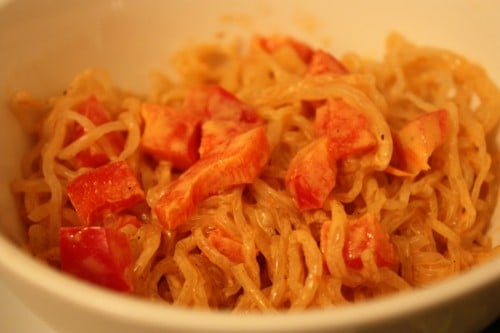 Kelp Noodles, dressed with cheesy red pepper and hemp dip and served with a big kale and spinach salad: 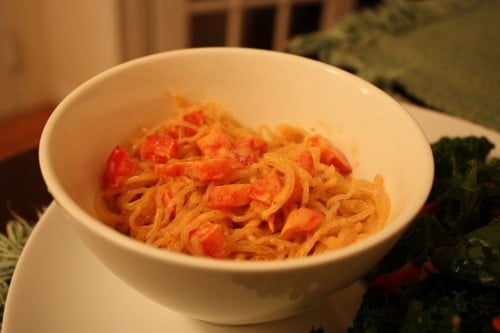 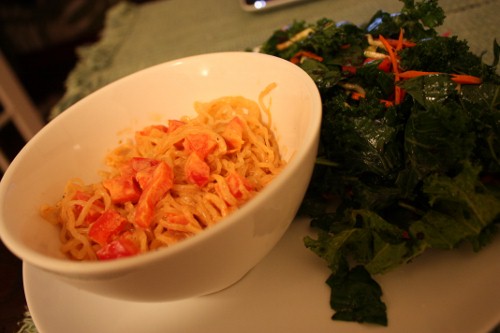 I couldn’t have asked for a tastier way to bring kelp noodles back into my life! This dinner got two big thumbs up from me, and it’s definitely what’s on the menu tonight.

Speaking of menus, I’m in the middle of a desk lunch, and itching to focus on my food. Before I go, though, I wanted to share a little Q&A from my last set of comments. Reader Teresa wrote:

Your meals always look so good. I especially love the wrap paired up with a gorgeous salad. I have a question….I am fairly new in discovering a whole new healthy way of eating…Do you ever get tierd of eating so healthy? Any cravings like something out of the way you eat on a daily basis. I’ve omitted coffee but still like the smell of fresh brewed beans—-I’ve given up eating meat —-but I still crave them when I see others eating them. Just curious on your opinion.

Well, if coffee is what you’re talking about, I’m sure you’ll have seen the many posts where I talk about being a coffee fanatic, yeah? I drink it every morning, and I don’t find that it interferes with my health.

As for “unhealthy” food, I hope it’s not too annoying to say no, I really don’t. I haven’t eaten red meat since I was little (by choice), don’t have a taste for any popular processed snack foods (like Cheetos or whatnot), and don’t have a problematic sweet tooth. So the closest I get to junk food cravings is usually cravings for carob covered rice cakes, or the rare hankering for toffuti cream cheese. And if I’m ever dying for either food, I go right ahead and have it (ok, the Toffuti is less likely, because its partially hydrogenated and thus pretty nast to me, but the carob rice cakes, or perhaps some soy chocolate pudding? Heck yes.).

I get asked this question a lot, and I think that the real answer you’re looking for is this: I don’t crave “unhealthy” food because I eat three very substantial, very nutrient rich meals a day, and I snack when I feel like it. I heed unusual food cravings when I have them (like the above–I have zero problem indulging a craving that’s a little out of the ordinary), but to be honest, it’s once in a blue moon, and that’s simply because I never feel overly starved or deprived. Most women I see who crave stimulating foods — like processed foods or too many sweets — are simply not eating enough, period. They’re eating mini meals or skimping at various moments in the day, and compensating with snacky or junky cravings as a result. Satiety with nourishing whole foods is really, really key!


PS. Teresa, I also put “unhealthy” in quotes because I really don’t like talking about food in good/bad forbidden/allowed dichotomies.

I should also have added that I never, ever feel like I’m trying to “stick to” a healthy diet. I eat exactly in accordance with my tastes: you’ll never see food on this blog that I ate only because I thought it would be good for me, or that leaves me only half-satisfied and wanting more. You’ll also never hear me talking about food I lust after that isn’t a part of my diet, because there are no such foods: it’s safe to say that I eat a whole lot of everything I really like. And I feel so lucky that I have the means to fill my fridge with foods that give me pleasure.

So, raw kale salads, collard wraps, beans, greens, veganism: these habits don’t stem from a sense of duty. Well, that’s not entirely true: I do feel an ethical imperative to live a vegan life, so in that sense I feel that veganism is my duty as a person. But what I mean is that my sense of obligation to live the way I live is never an unpleasant one, or one that I resent: it’s in keeping with my desires. And in that sense I suppose it isn’t duty at all, so much as choice.

Looking back, I’m pretty sure that’s where the blog URL came from 🙂

What about you, dear readers? Where do your healthy food choices come from? And equally important: what are occasional cravings you like to heed? Does anyone else like carob covered rice cakes as much as I do?

I’ll be back later this weekend from upstate. I’ll be up there for a memorial, sadly, but with Chloe, which is wonderful no matter what the circumstance.