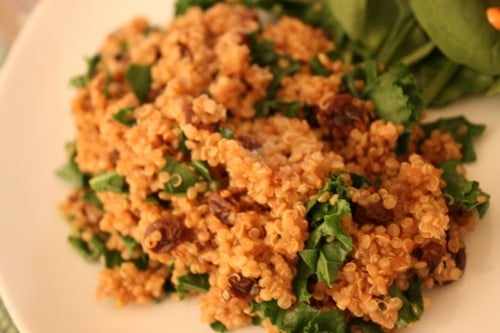 One of the main reasons that many people hesitate to explore raw foods is the assumption that eating raw demands an arsenal of kitchen appliances: dehydrators, juicers, VitaMixes, etc. While it would be a lie to say that I don’t have all of those things, it would also be a lie to say that I use them all regularly. I go through phases of virtuously juicing each and every morning before I leave the house. I also go through phases wherein my juicer glares at me in neglect from my kitchen shelf. My dehydrator only gets used once a month, if that. And let’s not even start on some of the other appliances I don’t touch: there’s a waffle iron in my apartment that has been rusting since 2006.

Occasionally I’ll start lusting after a new appliance (is there any way of saying that that doesn’t sound filthy? Nope.) Right now, I want a George Forman Grill, as cheesy as that is, because Caroline always makes such beautiful grilled veggies with hers. I’m also intrigued by the idea of a pressure cooker, and may even get to borrow one this weekend. But before I purchase any new kitchen gadgets, I feel a sense of obligation to dust off the ones I ignore.

Case in point: my rice cooker. 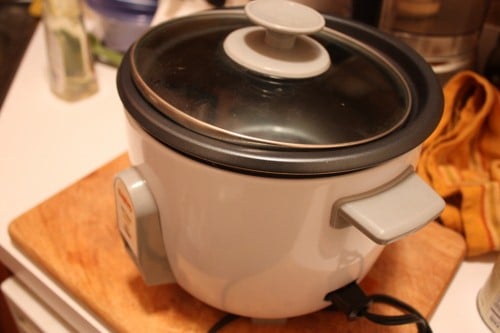 I freakin’ love rice cookers. Cooking perfect rice the old fashioned way, while admirable, comes as naturally to me as forecasting the weather (which is to say, not at all). Leave it in for one moment too long, and it’s stuck to the bottom of your pot; get the water/grain proportions just a little wrong, and it’s mush. Rice cookers aren’t foolproof, and you still have to keep a careful eye on them, but they take so much guesswork out of the process of cooking rice or any other grain. All you have to do is add your grain, water, and turn the machine on until it magically decides to turn itself off. For eaters who are new to veg*nism, rice cookers provide impetus to eat more grains, which are filling, healthy, and cheap. And as an added bonus, most rice cookers double as vegetable steamers. 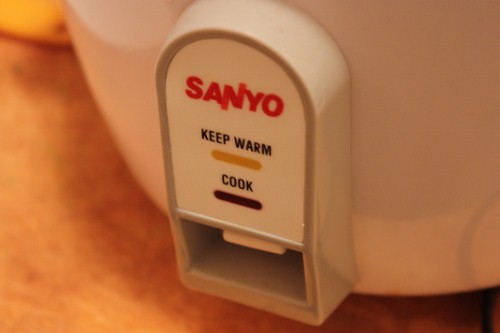 For someone who’s as gaga about her rice cooker as I am, though, I can’t tell you how often I cook rice, millet, and quinoa in a normal pot. Why? I have no idea. It may very well be my reluctance to drag a stool from my living room into my kitchen and take the darn thing off my shelf, which means that I should probably leave it on the kitchen floor, as I do my dehydrator, salad spinner, mandolin, and sometimes my Vita (Mom, if you’re reading, I’m sorry).

Recently, my girl crush Laura threw together a VegWeb newsletter featuring rice cooker recipes. They all looked amazing: turmeric rice, garlic lentils (OK this would horrify me, but it’s excellent for normal people), mushroom and black bean rice, and seitan sweet buns. This was the kick in the pants I needed to use the ‘ole rice cooker again. The recipe that most inspired me among Laura’s picks was this: super easy quinoa with kale and cranberries. Between the quinoa, the kale, and the cinnamon, the recipe had “Gena food” written all over it. Instantly I got to work on my own version, substituting raisins for cranberries and adding some almond milk for creaminess at the end. Ultimately, it went down like this:

Place the top five ingredients in a rice cooker and turn it on.

When the machine turns off and goes into heating mode, stir in the almond milk and kale. Allow it to sit and warm up for about 5-10 minutes. The almond milk should absorb just enough to lend creaminess to the dish, and the kale should get tender. Serve!

I had mine along with a salad and my cheesy red pepper hemp dip/dressing (which continues to amaze): 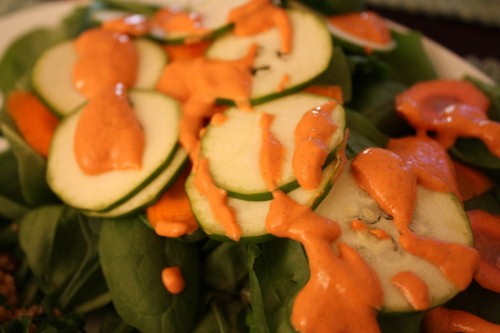 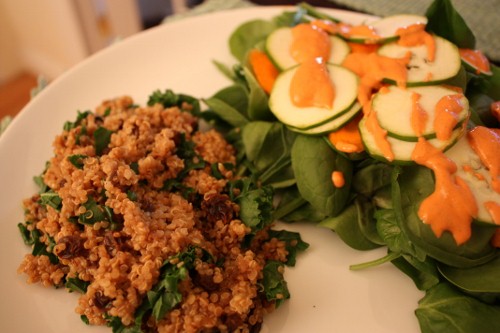 …and all was right with the world.

If you’ve got a rice cooker at home, now’s the time of year to break it out. It makes cozy, warm dinners like this one hopelessly effortless (in fact, I made and ate this meal in the course of 40 minutes, dashing hither and yon), and it will encourage you to eat more tasty and affordable whole grains.

Before I go, I wanted to quickly answer a question that Dianne asked regarding my mushroom soup. She said:

You often post recipes that make several servings. Can you write about what you do with the leftovers? I worry about things going bad in the fridge, especially raw foods, and I’m wondering if you have anything special you do with these kind of leftovers, like freeze them, or if you just happen to use it up in two days. Thanks!

The answer is that raw soups, unlike regular ones, really don’t freeze or keep well. I’ll typically polish them off in about a day. I’ll often eat a double portion of a soup (i.e., the recipe makes five normal servings, but I’ll eat two at once), and I usually bring another cup of whatever I make to work for lunch. I also often use the soup as a salad dressing or a dip — the nice thing about raw soups is that they’re really versatile. Hope that helps!

I’m off to D.C. for a last moment trip tomorrow, but I’ll probably be posting a recipe tomorrow or on Sunday morning, and then the usual travel recaps. Hope you all have good weekend plans!