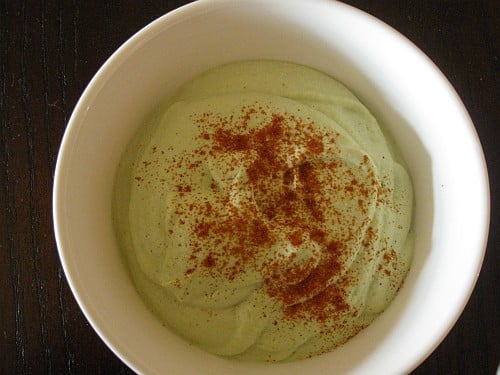 I dedicate this post to my friend Heather, who is a hummus fiend, though in truth she is not the only one! Hummus is much adored in the foodie community, and with good reason: it’s creamy, delicious, versatile, and high in protein and fiber. Unfortunately, hummus isn’t raw! The beans used in regular hummus are cooked. Some raw foodists make hummus with sprouted chickpeas instead, but to be honest with you, I find the taste of sprouted beans to be unbearable. For this reason, I’ve been on the quest for a perfect raw hummus recipe for a while. Many of the recipes I found called for nuts, but in spite of my fondness for nut pate, I found them to be really heavy–the opposite, really, of regular hummus.

Which is why it’s ingenious that someone decided to use zucchini as the hummus base. This yields a slightly thinner and greener hummus than the norm, but it’s easy to thicken with tahini and sesame seeds. There are many versions of zucchini hummus floating around: Ani Phyo includes one in her book, and there are several online. The following is my favorite. It is, in my mind, the perfect raw hummus: all of the flavors of regular hummus, with none of the bloating. Best of all, it’s 100% raw.

I was inspired by this recipe, and I found that the olive oil and zucchini yielded a mix that was too thin to be hummus: it was tasty, but more akin to a tahini dressing. So I thickened it up with some raw sesame seeds in addition to the tahini, and voila: an amazingly rich, creamy, and tasty blend. Here’s the recipe:

Raw Zucchini Hummus (yields over 3 cups; you can easily cut this recipe in half)

Put all ingredients in your Vitamix and blend to a rich perfection!

Same as above. You may have a hard time blending the sesame seeds, so I recommend soaking them for a few hours first, halving the recipe, and stopping frequently to scape the bowl. You can also omit the seeds entirely, but in that case I also recommend omitting the olive oil to keep a thick consistency. 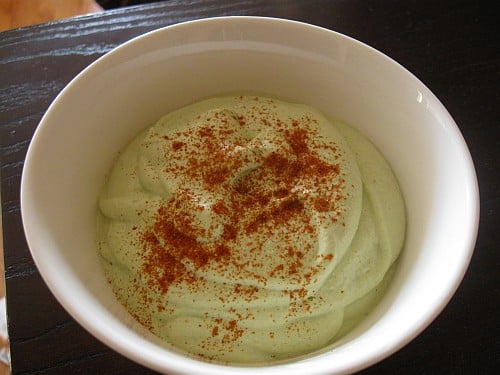 I could honestly have eaten a bowl of this stuff last night along with some crudités, but since I insist on making greens the centerpiece of as many meals as I can, I enjoyed the  hummus scooped into endive leaves and served alongside a big salad of dark greens, tomatos, endive, and fresh asparagus. It was delicious. 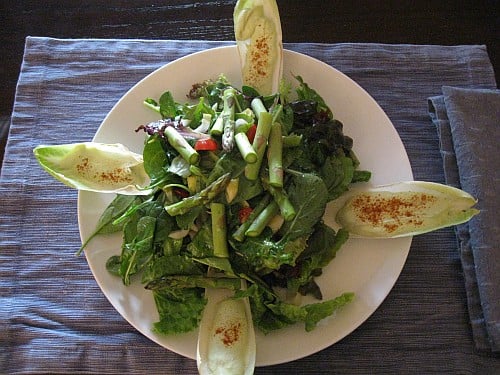 OK guys: it’s your turn! Tell me all about your Raw Wednesday!