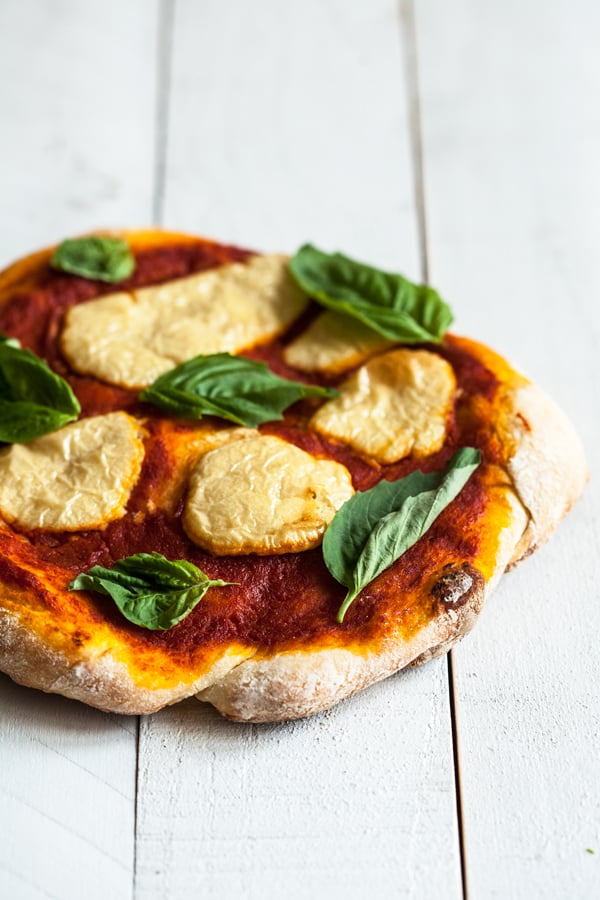 This vegan pizza margherita changes everything. It’s definitely not my first homemade pizza, but it’s the best and the easiest one I’ve made, and I know it’s the one I’ll keep making. 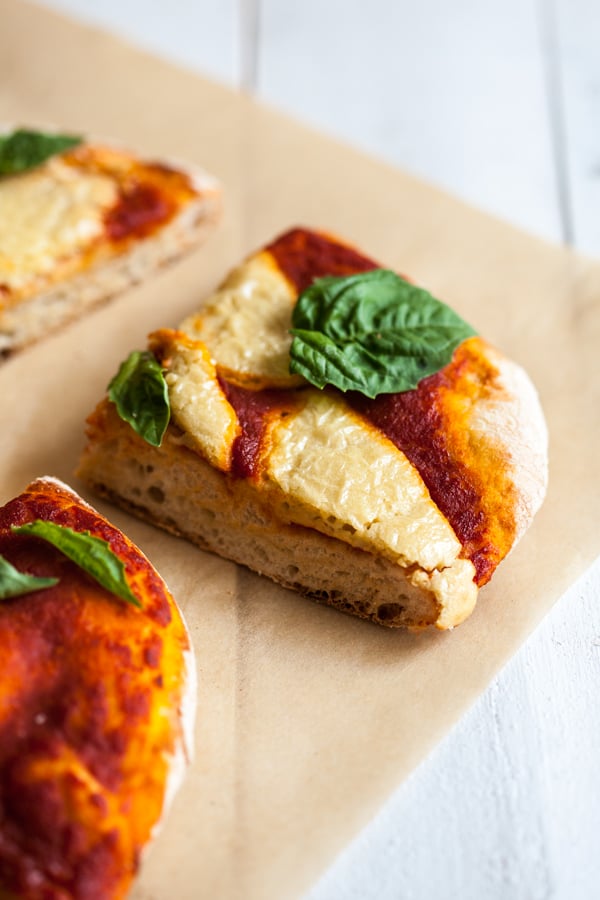 My goal was to create a traditional vegan margherita, and to keep things as simple as margherita should be: a good, tender-yet-crispy crust, tomato sauce, vegan mozzarella, basil. I’m no master pizza maker, but I think I did a pretty good job.

The crust is inspired by The Kitchn’s version, but I used instant yeast in place of active, dry yeast: I find it simpler and quicker to work with, and since reading Bread, Toast, Crumbs it’s been my go-to. In the past, I’ve always allowed the dough to rise immediately before shaping and baking; this time, I refrigerated it overnight, for ease, and I was thrilled with the results.

Now that I’ve tried it, I know that I can make pizza dough on a weekend and give it a couple nights in the fridge before using it for fresh pizza during the week. Translation: more pizza suppers for me. And the dough recipe makes two, 10-inch pizzas, which is the perfect amount for someone who’s cooking solo (one to eat right away, one to save and reheat). You can definitely double the dough recipe if you’re feeding a crowd. 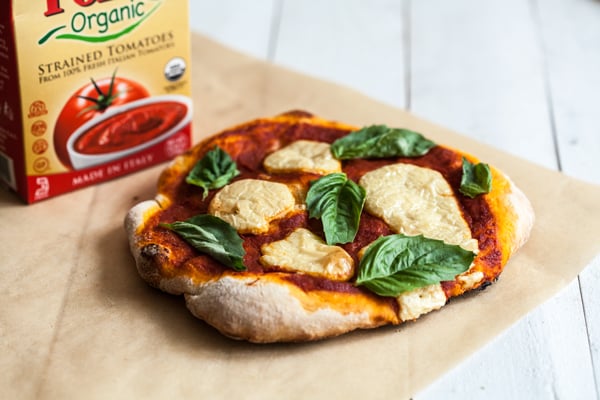 The sauce was made with fresh, organic strained tomatoes from Pomi. I’ve been loving Pomi’s new organic line, which features just-picked, Italian plum tomatoes in BPA-free, shelf-stable packaging. The strained tomatoes are smooth, flavorful, and they’re packaged without excess sodium, which means that you can take charge of seasoning at home. 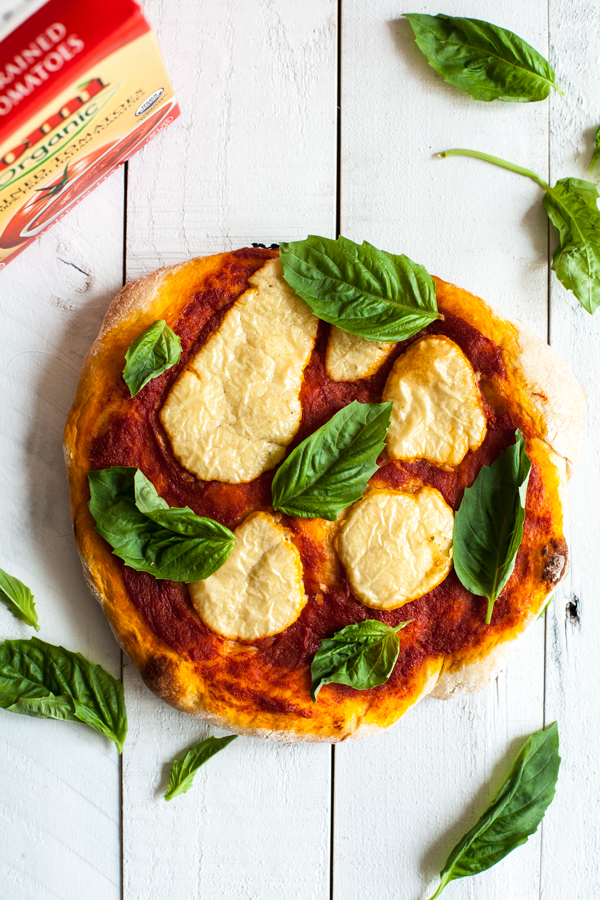 As for the cheese, I made a homemade version of mozzarella. It’s similar to my go-to cashew cheese, but it’s a little less dense, and I add some cornstarch so that the cheese thickens as its baked. If you like, you can use a commercial vegan cheese of choice to help make the recipe even quicker, but I’m happy to have a simple homemade version at the ready (and now I want to try it in grilled cheese, too). 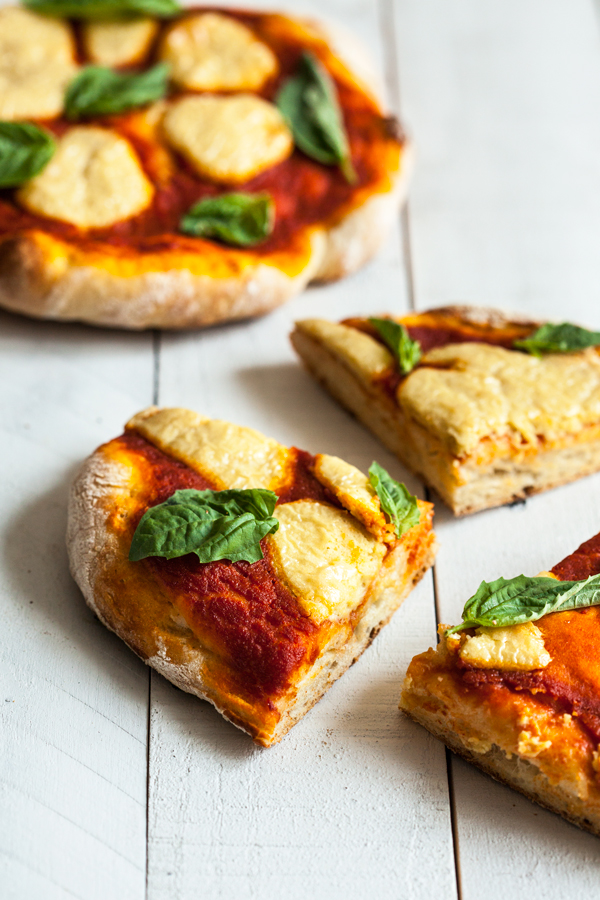 You can grab the recipe and instructions over at the Pomi site now. I know that homemade pizza demands a bit of a learning curve (at least it did for me), so if you have any questions, feel free to ask! Hope this will be the first of many homemade, seasonal pies I share here on the blog.

This post is sponsored by Pomi. All opinions are my own, and I love the quality and freshness of these tomatoes. Thanks for your support!