These vegan breakfast pinwheels are protein-packed, thanks to refried beans and vegan egg, which is made with silken tofu and chickpea flour. They’re a great make-ahead option for breakfast or lunch on-the-go. Plus, they’re smoky, savory, and delicious!

I know there’s been a lot of breakfast content lately, but there’s one more idea that I have to share.

These vegan breakfast pinwheels were created thanks to two other, recent breakfast recipes.

One of those was a simple recipe for smoky, vegan refried beans, which can be ready in about 15 minutes.

Another was a recipe for a homemade vegan liquid egg mixture. It’s a nutritious and economical alternative to store-bought, liquid vegan egg.

What happens when you put these two components together, maybe with some leafy greens, and wrap them up?

What do you mean, pinwheels?

Within the realm of food, what’s a pinwheel?

Basically, it’s a wrap that’s been cut into crosswise sections.

I first became aware that there was such a thing when I was in high school. I wasn’t yet vegan or vegetarian. There was a place near my school that sold smoked turkey, arugula, and tomato pinwheels, and I (along with most other students) loved them.

I hadn’t thought about the famous pinwheels until recently, when I made the refried beans and the vegan egg in the same week.

I was also thinking about a frequent reader request, which is for savory, make-ahead breakfast recipes.

For me to think of make-ahead sweet breakfasts isn’t a struggle. There are overnight oats, muffins, oat bakes, and more.

I eat a lot of savory breakfasts, but they tend to be less portable than sweet ones. When I do think of a savory vegan breakfast that can be part of a meal prep routine, I get excited. These breakfast pinwheels fit the bill.

I’ve written a lot about the importance of protein at breakfast. My thoughts in this post, but the Cliffs Notes version is that a protein-rich morning meal can contribute to satiety and blood sugar stability.

A protein-rich breakfast can also make it easier in general to meet protein needs for the day.

While most Americans tend to over-consume protein, sourcing adequate protein can be a learning curve for vegans. Starting the day with a protein-rich meal can help.

While this certainly isn’t something to obsess over, it is something to think about. My experience with nutrition counseling suggests to me that most clients have the hardest time with protein first thing in the morning.

There’s tofu scramble, of course. Yet it never hurts to have more high-protein vegan breakfast ideas.

These breakfast pinwheels have protein from several forms of legumes: soy beans (tofu), pinto or black beans, and chickpea flour. If you use a higher protein, whole grain wrap, that will contribute even more of this important nutrient to the recipe.

How to prepare breakfast pinwheels

Before making the breakfast pinwheels, you’ll need to prepare the refried beans and the vegan egg that are part of the recipe.

But it’s worth saying that you have the option to use shortcuts! And you should, if you want to.

I’ve gotten a lot of satisfaction from making more homemade staples this year, but I know when I’m too tired or busy to try. It’s such a gift that nowadays, there are store-bought versions of so many plant-based foods.

So, if you prefer to purchase canned, vegan refried beans and store-bought vegan liquid egg, go for it.

You’ll need to prepare the egg in disk shapes, as described here. I’ve included those instructions in this recipe, too.

The rest of the breakfast pinwheel recipe is a breeze, once you’ve made your components.

Simply layer the refried beans onto a flour tortilla or wrap.

Cover the beans with your disk-shaped egg. That may be fine for you, or you may want to add some vegetables.

I’ve tried the pinwheels now with roasted red bell pepper, very thinly sliced tomato, and romaine leaves. I like them all!

At this point, you’ll simply roll the wrap up and then slice it into cross-sections.

I don’t bother tucking the ends when I roll my pinwheels, as I would do for a burrito. You can trim the ends, or you can just not mind that the cross-sections with the ends have their own, unique shape 😊

To help “seal” your roll, you can use a little bit of extra refried beans.

As far as size goes, I like to make my pinwheels about 1 1/2-inches/4cm thick.

What type of wraps should I use?

Each roll will yield the most breakfast pinwheels if you use a larger wrap—burrito-sized, or 10-inches in diameter.

However, if you have smaller wraps at home, that’s OK. You may simply want to prepare more than 4, knowing each will give you a few less pinwheels than the approximate 6 that a larger wrap will create.

You can use a whole grain wrap, a spinach wrap, a gluten-free wrap, or whatever you like. So long as it’s pretty sturdy, it ought to work fine!

Part of why I thought of the breakfast pinwheels as a meal prep option is that they’re easy to store for a couple days.

I don’t recommend storing for longer than 2 nights; at this point, the pinwheels may become a little mushy. But they’ll be fine until then.

I think it’s easiest to store them in a container that’s cozy. If they have too much storage space, they can come apart. This container holds the breakfast pinwheels nicely.

I’ve been loving the flavor of the breakfast pinwheels, with their smoky refried beans and savory, “eggy” tofu layer.

However, I can think of so many ways that you might vary the pinwheels. You could adjust the seasoning of the beans to make them more spicy. You could even replace them with hummus (hemp hummus, if you want a little extra protein) or cashew cheese.

The egg could be replaced with thinly sliced tofu, if you don’t feel like making liquid vegan egg and need another protein.

If you like, you could add sun-dried tomatoes, pickled jalapeños, shredded vegan cheese or yellow cheese sauce, and/or cooked or steamed greens.

There are, of course, so many sweet variations to ponder for vegan breakfast pinwheels, and now the wheels are turning.

But savoriness is what makes this recipe shine. Here it is. 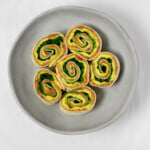 I’ve so been enjoying the color and cuteness that these little rolls are adding to my morning, and I hope that you will, too. If you try a fun variation, let me know—I’d love to hear about it.