My friend Anne and I have a new tradition called “ingredient potlucks.” It involves meeting up after work, comparing notes about what each of us has in the fridge, and coming up with a meal that is quick, healthy, and really tasty. Last time we did this, we came up with a delicious sweet potato, brown rice, lentil and hemp salad with hemp oil and a mustardy glaze. Last Thursday, we weren’t even sure we could do an ingredient potluck, because we were both running a little short on groceries. That said, necessity is the mother of invention, and I think you’ll be impressed with our final creation: a simple-yet-flavorful mixture of quinoa with roasted eggplant, red peppers, and balsamic vinaigrette.

Earlier that week, I had made my kale salad with apples, raisins, and creamy curried dressing, which I posted yesterday. Since I had more kale on hand, and more carrots, and one more apple, and some raisins, I decided to make it again. I was out of walnuts for the dressing, though, so I used cashews, and realized that it’s just as good with cashews, and a little more neutral-tasting. When I got to Anne’s, she had beets to spare, so we added those to the salad. What a great addition they were!

For our entrée, we did something similar to what we had done last time: a mish mosh of grains and legumes, spruced up with a good vinaigrette. Anne had quinoa and red peppers; I had some eggplant I’d grilled up and had yet to use. 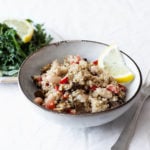 Along with the salad, this was so tasty. Its heartiness complimented the crispy kale well! Of course, you don’t have to use roasted eggplant as your vegetable of choice. Zucchini, broccoli, summer squash, mushrooms, and many other vegetables would work nicely here.

Next time you’re meeting up with a friend, you might want to consider an ingredient potluck, too! It’s a really fun way to pool together resources, improvise, and challenge yourself to creating something unexpected.

Tomorrow, I have a green recovery story for you that took the author a month and a half to write and send to me. The thoughtfulness and sincerity she poured into the piece is evident, and I hope you’ll all enjoy it!