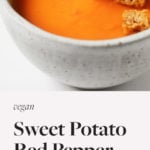 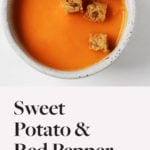 This vegan sweet potato red pepper soup is so easy to make! Keep it simple, or use one of my seasoning suggestions to vary the flavors. It can be prepared with fresh red peppers in summertime or roasted bell peppers from the jar.

Soup has been the last thing on my mind during this warm, humid month. But we had a burst of cool weather on Sunday. So, I seized an opportunity to make something warming. Two loaves of Ali’s peasant bread and a pot of this sweet potato red pepper soup were the result.

This isn’t my first time making the soup. It’s a combination I turn to again and again. I season the soup differently almost every time I cook it.

Sometimes I use curry paste, extra garlic, and lime. Once in a while, I’ll add curry powder and vegan yogurt. At other times, I make it with smoked paprika and chili. The beauty of the soup is that it’s a solid base and canvas for adaptation.

Why sweet potato & red peppers are a winning combination

This soup is just one of many ways that I like to combine sweet potatoes and red peppers. For me, they’re a winning combination. I love their combined sweetness, offset by the brightness of the peppers.

I’ve used sweet potatoes and red peppers in a creamy spread. I especially like to pair them up in a vegan “quesadilla” (nontraditional).

Do I need to use red peppers for the soup?

Not exactly. You can use yellow or orange bell peppers instead of red.

But I don’t recommend green bell peppers for the soup. They don’t have the same level of sweetness as red, orange, or yellow. They’ll also create a different—not as appetizing—color when you blend them up!

Can I use roasted red peppers from the jar?

I love using fresh peppers in this soup during the summer months. It’s a joy to roast them from scratch. I think their flavor is more prominent when I prepare them this way.

But I’ve definitely made the soup with jarred, roasted bell peppers. It works nicely, and the jarred peppers also have a slight acidity that works well in the soup.

If you use jarred peppers in this recipe, don’t forget to adjust the salt you add accordingly. Jarred peppers are typically pretty salty, so it won’t be necessary to season heavily.

This soup’s adaptability is its superpower!

It’s a simple base: just onion, garlic, sweet potato, and broth. These ingredients go into the blender (or get pureed with an immersion blender). The special ingredient is that red bell pepper, fresh or preserved.

Seasoning is your adventure of choice. I’ve come up with four variations that I love:

Add two extra cloves minced garlic to the base ingredients. Then, add 2 tablespoons red curry paste to the soup before simmering (along with the potatoes, broth, and salt).

Add a tablespoon of curry powder to the soup before simmering (along with the potatoes, broth, and salt).

After the soup has finished cooking and blending, stir in 1 cup plain vegan yogurt of choice. Serve with fresh, chopped cilantro. You can also stir in some cooked basmati rice for extra staying power.

Add 1 teaspoon smoked paprika and 1 teaspoon chili powder to the soup before simmering (along with the potatoes, broth, and salt).

I’ve been polishing off bowls of the soup all week for lunch. I pile them with rustic croutons, and I serve them with a simple salad.

Soup leftovers will keep for up to four days in airtight containers in the fridge. They also freeze incredibly well! You can pop your leftovers in the freezer for up to six weeks. 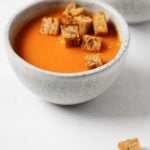 Homemade croutons (and other garnishes)

For croutons, I simply cut a couple slices of the peasant bread into cubes and transferred them to a parchment lined baking sheet. I sprayed them with olive oil spray and baked at 350F for 15 minutes. I checked them a couple times to be sure they didn’t burn. Easy peasy.

You can use any type of bread boule—sourdough, peasant bread, a whole grain loaf—to make the croutons.

Or, you can serve the soup with tortilla chips, a scoop of whole grains (I like doing this with quinoa), or toasted seeds.

You can also skip a topping and choose to focus on a side dish instead. The soup is lovely with a slice of avocado toast or a salad.

Hope you’ll find this sweet potato red pepper soup to be as versatile and tasty as I have. It’s a good mainstay, but it’s also a lovely side dish for the fall and winter holidays, too!

Enjoy the soup, stay cool, and I’ll see you on Sunday with some fresh recipes and reads.