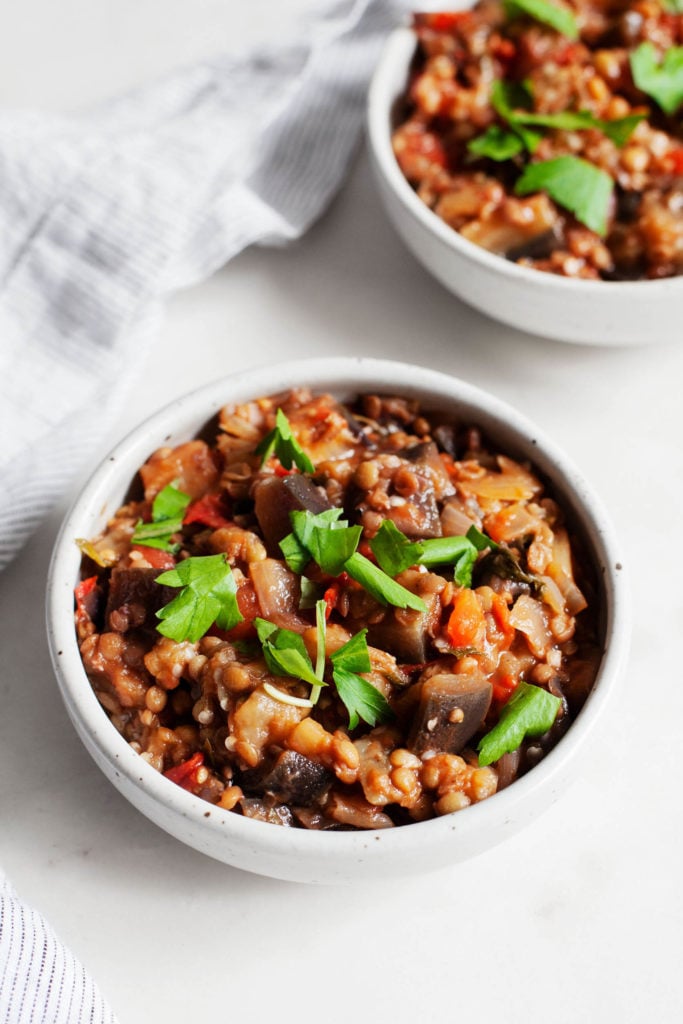 I can’t think of a better way to celebrate late summer produce than with these stewed eggplant tomato lentils! They’re my first eggplant recipe of the season and a great one to start with.

Soup vs. stew vs. topping

I couldn’t quite decide on what kind of recipe I was trying to make as I made the stewed eggplant tomato lentils. At first, I had the idea of an eggplant and lentil soup. But then I thought to myself that it would be even better to have something for serving over toast and pasta, along the lines of a caponata.

This recipe is neither and both. It’s stewy enough to be eaten in a bowl, if you like. But it’s also hearty enough to be served over a whole grain, like quinoa or farro, or scooped over a slice of your favorite toast.

Maybe I should have pushed it to be something less amorphous, but then, a lot of my favorite recipes are the same kind of in-betweens. I’m thinking of my red wine braised lentils, braised beans & kale, slow cooker chipotle lentils, and Moroccan chickpea tomato stew. All go-to recipes in my home, all similarly adaptable.

These stewed eggplant tomato lentils are simple and unfussy. I think this is how it should be with recipes that show off the beauty of late summer produce. You’ll need the following for it:

I used fresh tomatoes for the recipe, since they’re perfect right now. The recipe calls for four small or three large vine or beefsteak tomatoes. You could also use 5 Roma tomatoes in their place. It’s about a pound total.

If you don’t have fresh tomatoes, you can use either a 14.5 or a 28 ounce can of whole, peeled tomatoes instead. Use what you have in your pantry; obviously, the larger can size will yield a stew that’s heavier on the tomatoes. Not a bad thing, if you ask me!

I used one medium/large globe eggplant for the stewed eggplant tomato lentils (more on eggplant varieties here, if you’re curious). It was about one and a half pounds, and just over a pound of eggplant after preparation. You could use Italian, Indian, or Japanese eggplant as well. Just be sure that the total amount of eggplant you use is equivalent to 1 – 1.5 pounds.

My go-to lentils these days are pardina lentils. These are sometimes called “Spanish brown” lentils, too. They’re a bit rounder and hold their shape better than regular brown lentils in recipes. If you don’t have them, it’s no problem. Brown, green, black and even red lentils will work nicely in the recipe.

Balsamic vinegar gives the recipe both a little acidity and some sweetness. I tend to save the pricier, more syrupy balsamic vinegar for drizzling. It always ends up on top of my red wine braised lentils. And I use less expensive balsamic for salad dressings, pasta salad, or as a marinade for burgers or tempeh.

If you’d like a different variation that’s still bright and sweet/sour, I’ve seen recipes that call for eggplant and lentils with pomegranate molasses.

Store the lentils in an airtight container in the fridge for up to five days, or freeze them for up to six weeks. Like most stewy dishes, they taste even better after they sit for a day or two.

You can sprinkle another handful of fresh herbs over the lentils after you reheat them, simply to add a little freshness to the dish. Vegan parmesan (or hemp parmesan) and an extra drizzle of balsamic are also very nice on top! 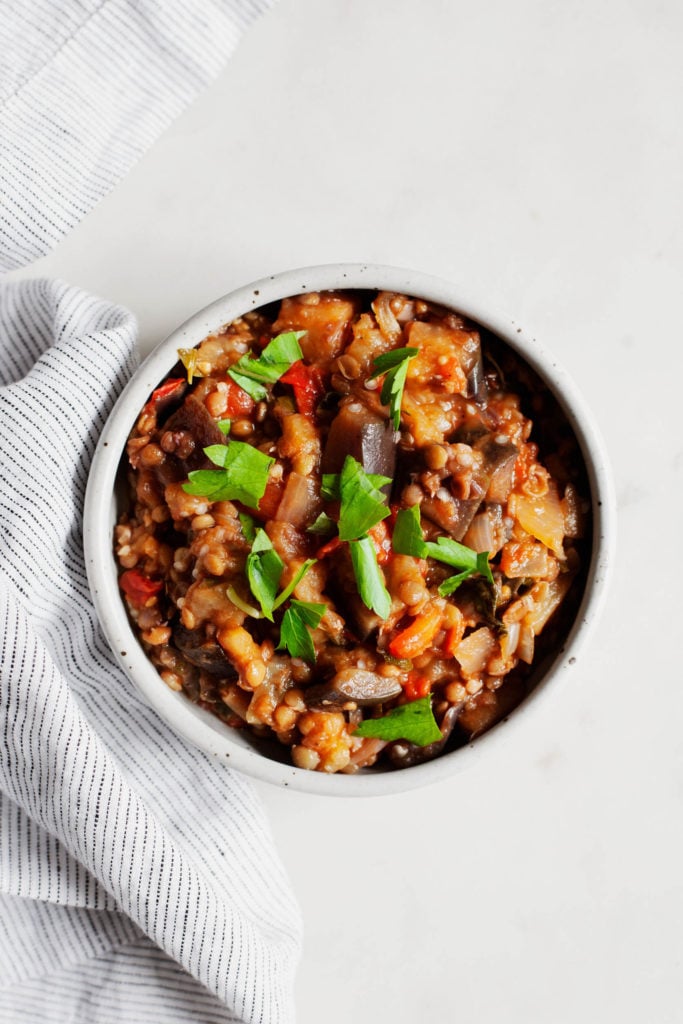 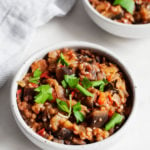 If using whole, peeled, canned tomatoes, add them to the recipe at the same time you'd add fresh tomatoes. Then, use a spoon or a potato masher to crush the canned tomatoes directly in your skillet. Continue with the recipe.

Whether or not to salt eggplant is one of those hotly debated preparation methods. The idea behind salting is to eliminate bitterness, but some argue that eggplants have been bred not to be bitter anymore.

Personally, I think salted eggplant tastes better. Bitterness (or lack thereof) aside, I think that salting improves the texture, making the eggplant softer once it’s cooked. If you don’t have the time or don’t like to salt eggplant, you can skip the step in this recipe. I’m a fan of salting, but I don’t think it’s necessary. 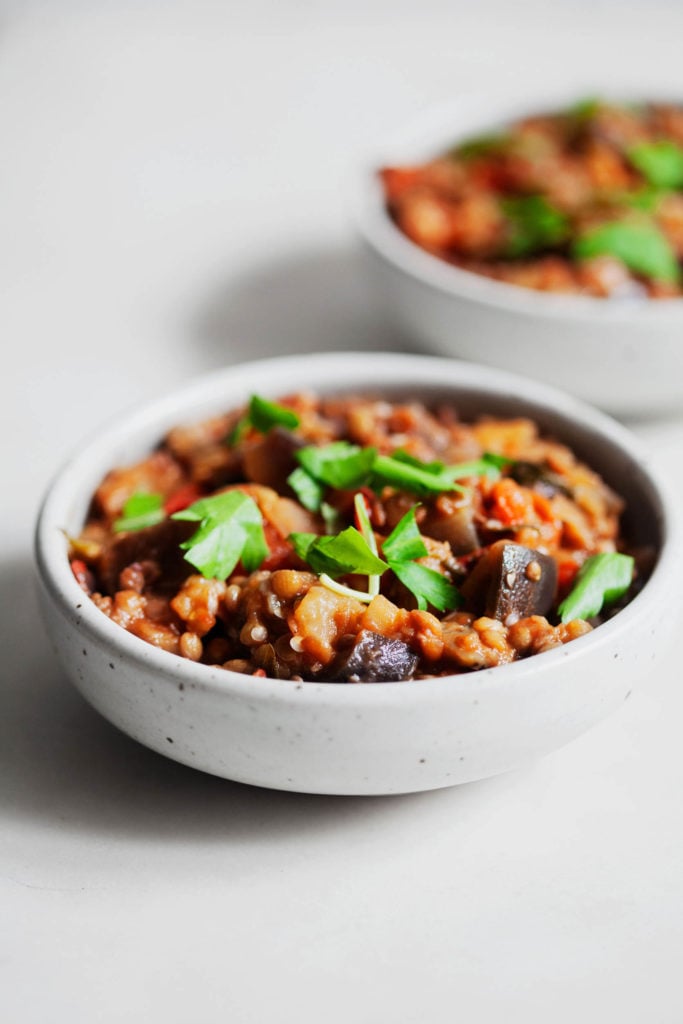 I made the stewed eggplant tomato lentils right after I got back from my refreshing long weekend away with friends. They were inspired by my time outside of the city and the farm stands that I passed by while I was gone.

The recipe was perfect for a Sunday afternoon when I didn’t have much time or energy to cook, but wanted something rustic, homemade, and summery to eat. I’m still enjoying the leftovers, mostly over toast, but tonight I’ve got big plans to serve it over pasta. I’m sure it’ll be tasty, and I’m excited to hear how you serve the dish, too.