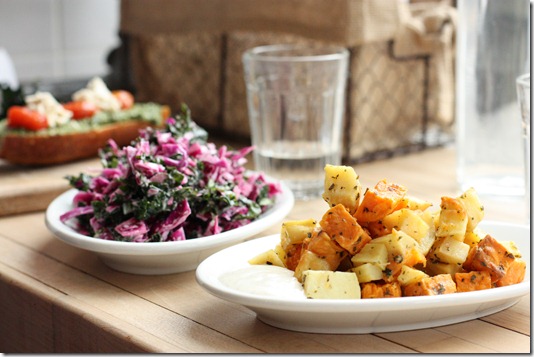 Two weeks ago, my friend Jim and I met for lunch at a new, mostly vegan dining outpost called (cheekily) The Butcher’s Daughter in Nolita. I’d heard some great things about The Butcher’s Daughter from friends, and I’m pleased to say that the hype was legit. The menu features cold pressed juices, raw food specialties, classic vegan fare, and a bright, elegant interior.

The team members behind this sunny restaurant are owner Heather Tierney (a mixologist and owner of Apothéke and Pulqueria in NYC), juice expert Brandi Kowalski (formerly of ABC Kitchen), and chef Joya Carlton (formerly of Buvette). Their individual contributions add up nicely in the space: it feels hip and stylish, the juices are fantastic, and the food is wholesome, simple, and well executed. The menu is not exclusively vegan, but it is primarily vegan, and it highlights the ways in which plant foods can be every bit as versatile and satisfying as some of the animal proteins we (most of  us, anyway) grew up with.

When I tell people that I’m vegan, one of the responses I most often get is the (somewhat condescending) assumption that I must know nothing about animal agriculture to have made the choice I did. I must not know what it’s like to witness the ins and outs of life on a small farm, to see how farmers treat their animals, to taste the fresh meats and dairy that spring from these operations.

In fact, I am the granddaughter of a butcher who later ventured into the supermarket industry, the daughter of a devoted hunter, and I spent a good portion of my childhood in New Hampshire farm country. My uncle’s family raised chickens and kept horses, and the farmer down the road, for whom I used to help collect sap for maple syrup each winter, produced dairy. I have at least some firsthand acquaintance with how animal farming—at least the small scale, independent model—works. And I’m vegan anyway, because I still see no justification for bringing animals into the world so that we can consume them when there is no necessity for us to do so. A friend of mine once said to me (before he got to know me well) “you couldn’t possibly be vegan if you’d ever tasted a farm fresh egg, just collected that morning.” I have indeed tasted such things—I collected eggs for my parents quite a few times as a kid during my NH summers—but the pleasure I remember is pretty small in comparison to my many present day reasons for being vegan.

I don’t know enough backstory about The Butcher’s Daughter to say whether Heather Tierney is actually the child of a butcher. But I love the name and its subtle implication of filial revolt, of evolution between generations. I also love the idea that one’s birthright need not dominate subsequent life choices. Most vegans do their best to create continuity with family traditions; they talk openly with family members about their lifestyles, veganize classic holiday dishes, and bring crowd-pleasing food to potlucks. But it’s an undeniable fact that becoming vegan almost always entails some feelings of revolt. This is true on the home front, and it is also true ideologically; for me, being vegan means alleging that something is not enduringly or necessarily right, simply because it is tradition.

Of course, becoming vegan need not mean absolute culinary revolution. Instead, it can mean finding ways to translate traditional culinary concepts into a plant-based model. And that’s what The Butcher’s Daughter does so craftily. Just check out the “beet tartare" or the vegan charcuterie plate on the lunch menu! 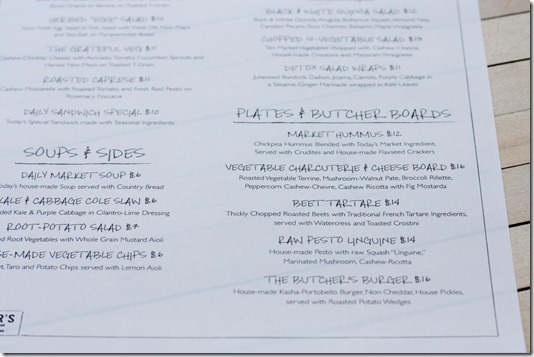 Or the butcher’s burger, or the raw pesto linguine. All familiar food concepts, rendered in a bright and newfangled way.

As much as I’m dying to try the “beet tartare,” it was a chilly day when I met Jim, and the root potato salad (root veggies dressed with whole grain mustard dressing) was calling to me. So was the “best kale salad.” How on earth could I turn down a dish with that title?! 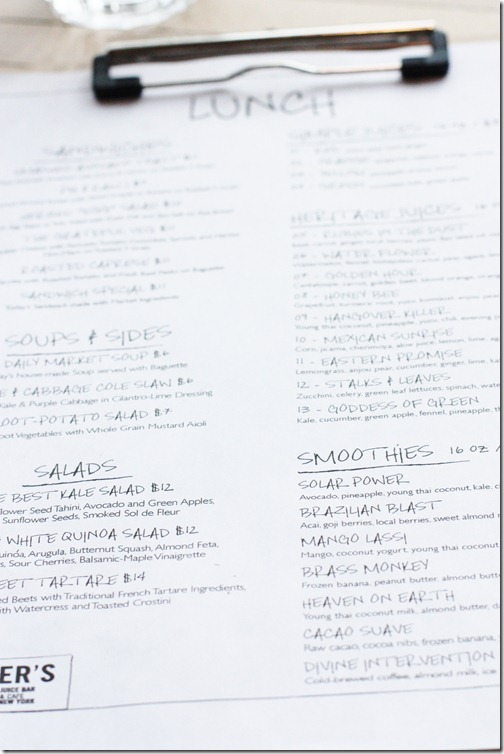 The best kale salad was, if not the best I’ve ever had (that would be like having to choose a favorite novel), very very good. I loved the way the smoked salt balanced all of the creamy avocado and tahini. The apples also added a nice bite and bit of acid to all of the healthy fats in this salad. 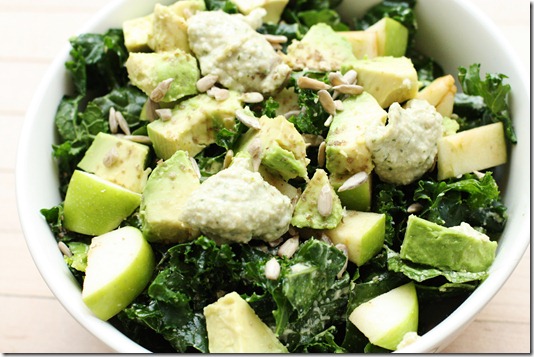 And the root vegetable salad? Just divine. Mustard and sweet potatoes are such a good match. 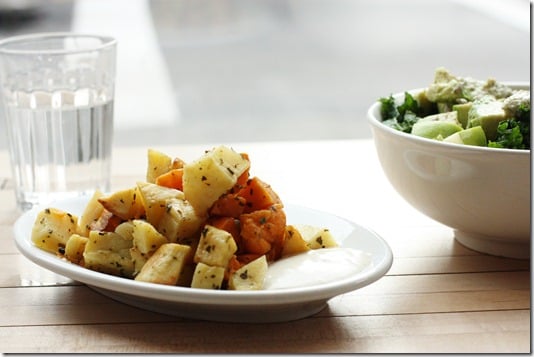 My friend Jim, an omni, ordered the kale and cabbage coleslaw, which he gave two thumbs up, along with the roasted caprese sandwich. It featured cashew mozzarella, which was very good (I sampled it!). 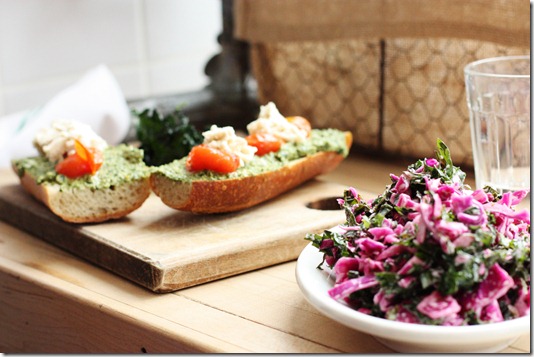 Jim is one of my best friends, and conversation with him is always long, fascinating, and funny. As we caught up on an entire six months’ worth of life, we enjoyed the restaurant’s cheerful ambiance: 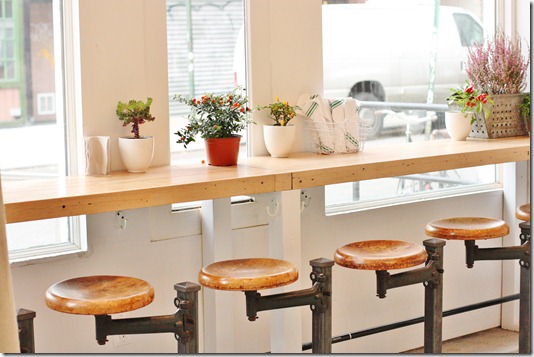 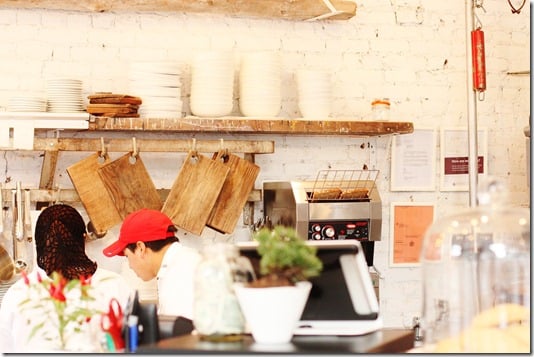 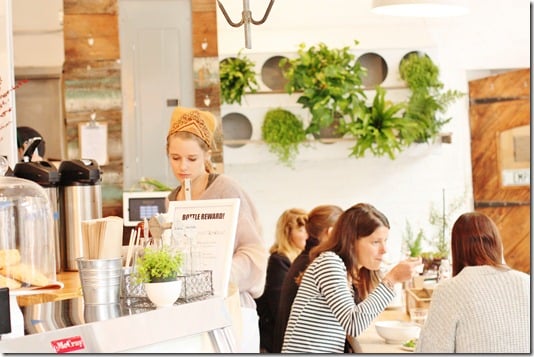 Before I left, I picked up one of the “heritage juices”—a green blend of green veggies and lemon. Simple and good. 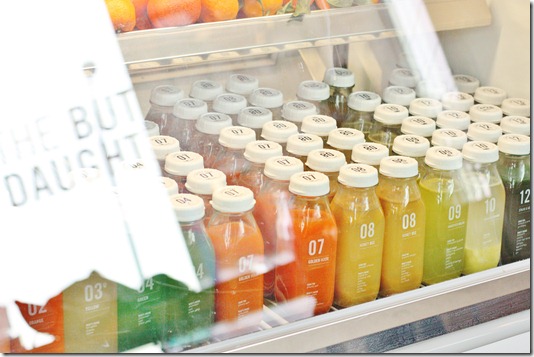 In all, I loved my meal at The Butcher’s Daughter, and look forward to going back. The restaurant features just my kind of food—simple, hearty recipes that allow good ingredients to shine through, but offer just enough imagination to feel playful. I do wish the menu were entirely vegan; the few egg dishes listed don’t really seem to enhance the menu, and such good use is made of cashew cheese and cream throughout that it’s hard to say why the eggs are vital to the restaurant. But I am grateful, regardless, for the efforts made to showcase the versatility and beauty of vegetables, legumes, nuts, seeds, and grains.