It’s flu season. And it’s a very bad flu season at that. In light of this, I thought it would be a good time to revisit last year’s controversial post on my choice to get the flu vaccine.

Many of you may have read about Carla Brock, a nurse in Springfield Missouri, was fired for refusing the flu shot and refusing a mask (which is sometimes the alternative offered to those who do not choose to vaccinate). Ms. Brock pleased spiritual and religious grounds for her choice, so this was not a vegan issue, per se, but she did cite her holistic perspective on health as the primary motive.

As I’ve mentioned before, I am in favor of vaccinations—a stance that makes me unpopular in some circles, but by which I stand. There are complications associated with vaccines, as there are with nearly any medical intervention, but on the whole, I believe that vaccines are one of the most significant and successful innovations of modern medicine. Where things get really complicated for me is the conflict between veganism and vaccinations, because most vaccines (unless one opts for the live virus vaccine) are developed in eggs.

So what’s a vegan to do? Well, this year, I did not get a flu vaccine (a choice I may ultimately rue, given the incredible rates of infection this year), because I’m not currently working in a hospital environment with vulnerable patients. But as I discussed last year, I will get the flu vaccine whenever I’m working in hospital environments. This is not an easy or a perfect choice, but it’s one that I am at peace with. If I work at a hospital with a mask option, I will look into their efficacy and consider them instead. If you’re vegan and you’re torn over this issue, I encourage you to revisit the post and the excellent comments it received last year. Really great discussion, with a wide range of opinions.

In that post, I questioned whether non-religious moral belief, rather than religion, should be among the grounds for exemption. Right now, one can be exempt from a vaccine for religious reasons, but not as a vegan. If flu shots are indeed a matter of life and death, shouldn’t we make them a universal rule? Or if we do allow for religious exemption, shouldn’t we also consider allowing exemptions for ethical world views, like veganism?

Interestingly, this very issue recently popped up in Cincinnati, and Vegansaurus covered it. Again, it seems to me to come down to consistency: if flu shots are mandated on the grounds that people may die from exposure, then any exception seems like too great a risk. But if exceptions are to be made for religion, I think veganism deserves consideration as well. 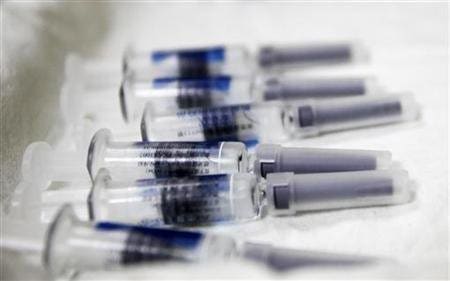 But let’s move beyond this discussion for a moment here, and talk about a solution that is a lot more potent than debating meanings and policy. That is the development of a vaccination that is not created with eggs. One of my readers, Katelyn, emailed me last year with a link about a new flu vaccine from Novartis, which is grown in mammalian cell cultures. These cell cultures are almost certainly non-human (I could not find confirmation of this, but it strikes me as likely), so this is not vegan progress, per se. But I’d be curious to know whether this method might soon lead to innovations in vaccine development that are actually vegan.

In the end, I can only hope that the next breakthrough in vaccination development might be a vegan breakthrough. Call me foolishly optimistic, but I strongly suspect that it’s possible. And in the words of my friends at Our Hen House, sometimes indefatigable positivity is just what the doctor ordered. (Womp womp.)

Stay safe this flu season, friends, and however you choose to approach the vaccine, know that others are facing the same choice, and that this is a safe space in which to be honest about your thoughts.