I loved hearing your blog crush confessionals. It’s not too late to be a total creeper and chime in!

Late last week, I tweeted out that I’d made a tasty chia breakfast pudding using this stuff: 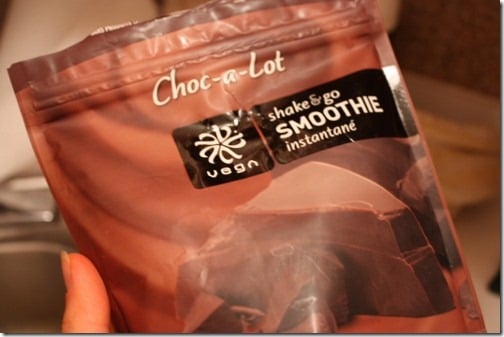 Meghann has been requesting the recipe ever since, and here, at last, it is.

What you see in the photo above is my friend Brendan’s Vega Shake & Go smoothie infusion, courtesy of the HLS swag bag. It’s no great secret that I’m not great fan of powdered supplements: I don’t regularly use a green powder or other smoothie infusion, and on the whole I prefer to load up my smoothies with nut butter or hemp seeds than with a formula. With that said, I recognize that smoothie infusions and powdered supplements can be mighty helpful when one is traveling (such as when I had the Vega smoothie infusion at the airport last week). And the reason I love and support Vega products is that they’re as close to having real food on the go as possible: Brendan has taken tremendous care to ensure that the whole line is vegan, plant based, mostly raw, and made with whole foods.

I mentioned last Monday that I’ve been on a bit of a chia seed pudding kick lately: it’s my hot weather answer to hearty bowls of oats. When I don’t have time to made something as scrumptious as Heathy’s blueberry chia pudding, I take the simple route, and I mix 2 tbsp chia seeds with a scant 1/2 cup nut milk, stirring every few minutes until it’s thick and resembles tapioca. I leave it in the fridge overnight, and in the morning, I take it to work, mush it up with bananas and berries and perhaps a little nut butter. It’s delicious, filling, and oh so easy.

As soon as I got my Vega Shake & Go, I knew I’d be marrying it with chia seeds in the near future. The genius of this stuff is that it can be mixed with a little water to make an instant smoothie: no blending or fruit is even necessary for either flavor or nutrition. But when one has a little more time on one’s hand, the Vega Shake & Go makes a nice addition to smoothies, puddings (check out Evan’s banana version), or parfaits.

Or, if you’d like a breakfast treat that also involves every healthy bloggers favorite trendy “superfood,” go ahead and mix 2 tbsp of Vega Shake & Go (any flavor is fine, but I used the chocolate) with 2 tbsp chia seeds, and a scant 1/2 cup of water. Shake or mix it every few minutes until it’s thick and congealed. You can either eat it right away, or leave it in the fridge overnight and take it to work in the morning. You don’t need sweetener, you don’t need a blender, and you don’t need time. This is a perfect breakfast on the go! 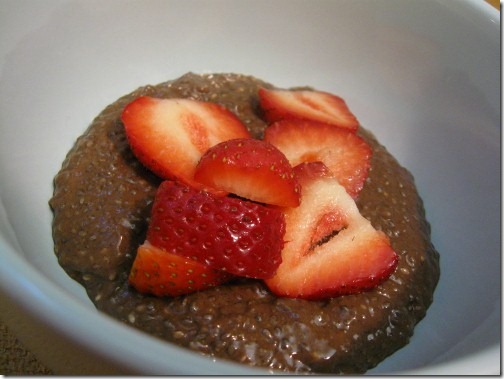 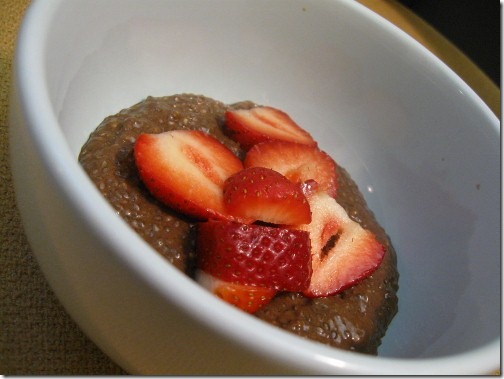 Topping it with sliced berries will make it look a little fancier. But they’re optional, too 🙂

There’s something undeniably fun about laboring over a bowl of oats, a parfait, or even mixing a killer smoothie. But it’s also nice to make breakfast with nothing but the twirl of a spoon. When that breakfast is rich in calcium (the chia seeds are a GREAT source — almost 20% of an average woman’s recommended value) and protein (15 grams), so much the better. Thanks, Brendan, for making life on the go a little easier for us vegan and raw folk.

HLS attendees, have you used your Vega Shake & Go yet? How? Any other Vega fans in the audience?