This vegan BLT has it all: crispy tempeh bacon strips, juicy summer tomatoes, and the best, homemade vegan mayo. It’s a plant based spin on the classic sandwich that you’ll want to make again and again!

Now that I’ve shared the homemade vegan mayo that I can’t stop making, it’s time to share the BLT sandwich that I’ve been hooked on this summer.

BLTs were one of my favorite sandwiches growing up. I’ve tried many approaches to veganizing them.

This is my favorite version so far. Part of this is just the satisfaction of using homemade ingredients.

I’m always happy to purchase what I don’t have time to make, but it sure does feel rewarding to prepare the tempeh bacon and mayo from scratch. I love both recipes, and neither require a lot of work. Win, win.

Beyond this, the vegan BLT is good for all the same reasons that make BLTs such a favorite: a mixture of salty bacon, sweet tomatoes, and tangy mayo. Toasted bread, creamy spread, juicy burst of tomato, and crispy lettuce.

Texture, flavor, and lots of nostalgia. Plus simplicity. My favorite sandwiches usually have just a few ingredients, which add up to something wonderful. This one is a shining example.

How to make a vegan BLT

The trick to making a vegan BLT is to find tasty, authentic plant-based ingredients that replace traditional bacon and mayo.

In late July, when I moved, I had a vegan BLT at a nearby restaurant that had oven-dried tomatoes, dressed arugula, and avocado in addition to mayo.

It was really good, and it set me on a path of experimenting with a few different, untraditional vegan BLT recipes.

I didn’t create a single sandwich that I didn’t want to eat. But the honest truth is that I kept coming back to the recipe that I’m sharing today.

Part of this was convenience. What I love so much about sandwiches for lunch is that they’re genuinely quick and easy for me to make.

Occasionally I come up with something unusual and labor-intensive. For example, I roast kabocha squash for this yummy, wintery creation.

But most of the time, I think that less is more for a sandwich. PB&J, for example, has only three ingredients, but there’s a reason it’s as beloved as it is. One of my grad school professors described it as a “nutritionally perfect food,” and he’s pretty much right.

So too with BLTs—less is more. I’ve stuck with a classic formula for this one: bacon, lettuce, tomato, mayo, bread. Occasionally I add some Dijon mustard along with mayo, and you’ll see that option in the recipe card.

Otherwise, making this sandwich is as simple as layering the ingredients, slicing, and serving.

There’s no vegan “bacon” that I love as much as my baked, crispy tempeh bacon.

I mean no offense to eggplant bacon, which is also a favorite. But vegetable-based vegan bacons just don’t deliver on protein, whereas seitan and tempeh bacon do.

Seitan bacon is usually something that I buy. But tempeh bacon is so easy to make from scratch. A little marinating and hands-off oven time is all that’s required.

Even better, tempeh bacon is rich in protein and flavor, but it has negligible saturated fat. Instead, it has healthful fatty acids, as all soybean-based foods do. And it offers some dietary fiber as well.

“Favorite” is a big word, I know, since I just posted this recipe a few days ago. But now that I have a vegan mayo option that’s homemade, easy, and wholesome, it’ll be hard to justify vegan mayo that’s $6-$9 in stores.

My cashew-based mayo is tangy, creamy, and absolutely delightful. The fact that it happens to be oil-free and wholesome is an added bonus for plant-based eaters.

You certainly can, and it’s no problem to, prepare this recipe with store-bought vegan mayo. But 1 cup of soaked, un-roasted cashews will yield wonderful things if you have a blender or a food processor.

Not a fan of BLTs? No problem at all. Use the mayo for:

Good news for this recipe is that it’s very meal prep friendly.

The tempeh bacon will keep in an airtight container in the fridge for up to 6 days. It can be frozen for 4-6 weeks.

The cashew mayo can be kept in the fridge for up to 4-5 days. Freeze it—leaving an inch of headspace at the mouth of your storage jar—for up to 6 weeks.

If you want to, you can prep the tempeh bacon and the cashew mayo ahead of time and freeze them. When you’re in the mood for a homemade BLT, you can defrost them and layer them with fresh lettuce and tomato.

In the winter, try substituting that thick slice of fresh, summer tomato with store-bought, roasted red bell pepper. It’s not quite the same, but it’s a seasonal twist that’s nice at any time of year.

What kind of bread should I use for my vegan BLT?

I tend to associate a BLT with white bread. My favorite option is my vegan white bread, which is really ideal for sandwiches of all kinds.

Yet multigrain and whole grain breads are also great for this vegan BLT, or any BLT. I have some homemade recipes that I love when I have the time for them.

One is my easy vegan multigrain bread, which uses a multigrain blend for texture and nutritional richness.

Another is my maple oatmeal bread, which is a little sweet and a little savory—really great for toast (and French toast), but also good for sandwiches.

And if you don’t have the time or the bandwidth to make bread, which I rarely do these days myself, then you can use a favorite store-bought option.

I’m asked often via Instagram about my favorite store-bought breads. My favorite is probably any variety of Dave’s Killer Bread.

Sprouted breads (and burger buns, and hot dog buns) from Angelic Bakehouse are a close second.

Other brands that I love and buy from include Silver Hills Bakery and some of the whole grain + vegan options from Arnold (Oatnut is a favorite).

If you have a local bakery that makes great sandwich bread or great sourdough, which also a nice option for this recipe, great!

Can the vegan BLT be made gluten-free?

Absolutely. You can use any favorite vegan and gluten-free bread, homemade or store-bought, to make the BLT sandwich.

Here we are, inexplicably entering September and back-to-school season. If you love sandwiches as much as I do, here are some of my favorites to take you into the year ahead: 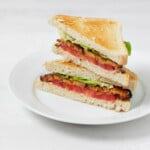 Sometimes, only a sandwich for lunch will do. And sometimes it has to be a sandwich that’s nostalgic, a classic.

As I sat in my new space this summer, staring at the fortress of boxes that I knew I’d be unpacking little by little and my window onto a new world, I took comfort in the familiarity of many vegan BLT lunches.

It’s my most sincere hope that this little sandwich will bring that kind of comfort to your life, too. Enjoy the recipe!