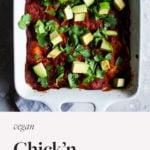 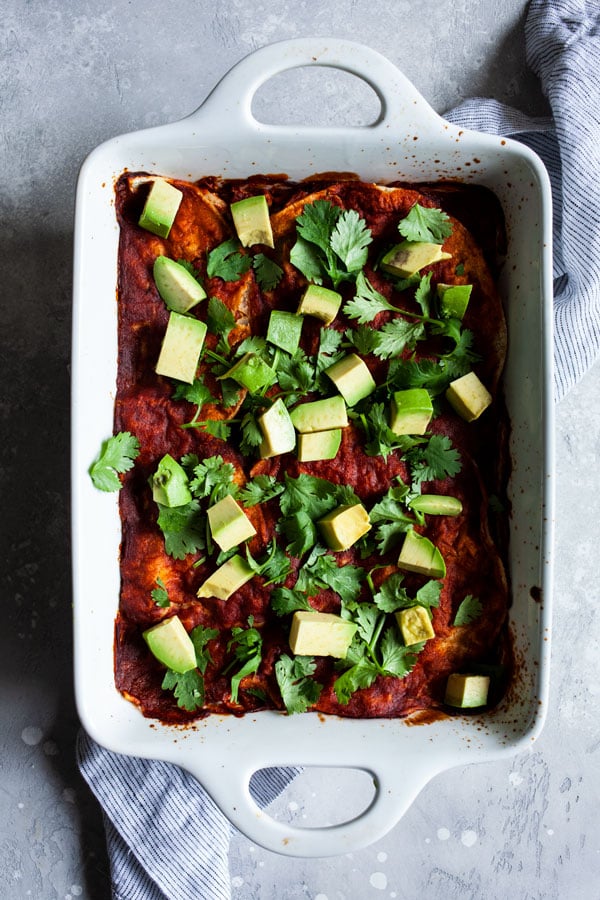 A few weeks ago, in sharing a lasagna recipe, I mentioned that big, casserole-like dishes have been a meal prep time-saver for me lately. They’re more involved than other recipes, but once they’ve been prepared, they give me at least 4-6 extra portions of food. And they’re a nice way to break up my routine of soups and stews and bowls, which—though trusty allies throughout my whole internship year—are getting a little repetitive at this point.

I often get requests for make-ahead breakfasts in general, and savory make-ahead breakfasts in particular. I can relate well to the demand for this kind of recipe, since I’m always on the hunt for new ideas myself. I’m a big breakfast eater, and my early hours this year have made it difficult to eat breakfasts that are as satisfying as what I’m used to making at home, but also easy to transport to work.

This breakfast enchilada casserole doesn’t have to be eaten for breakfast, of course; it’s great for dinner, too, and I’ve enjoyed it at both mealtimes. But I’m a big believer in getting a nice bolus of protein at breakfast (bolus! Always a funny-sounding word when I put it into writing), and the soy curls in the recipe make that an easy task here.

Soy curls are one of my favorite plant-based proteins. They’re inexpensive, a whole food (whole, non-GMO soy beans are the only ingredient), versatile, and they make a vegan “chick’n” that’s about as good as any store-bought vegan meat you can find, only cheaper. They’re also low in fat and packed with protein, so perfect when a protein-rich morning meal is the goal. 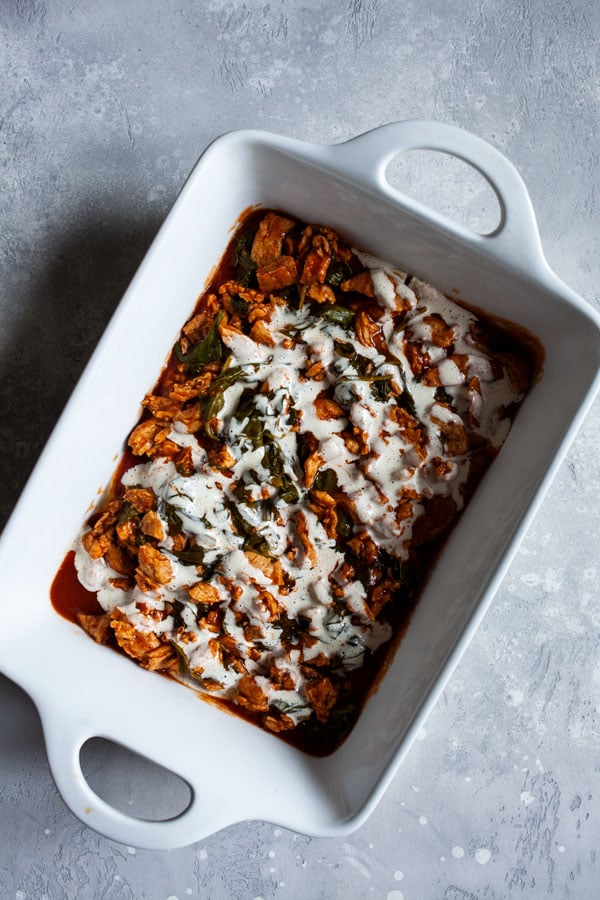 It worked out just fine. The cashew cream definitely tastes less “cheesy” than a store-bought vegan cheese would, but it sort of melts into the vegan chick’n and greens while the casserole bakes, giving the whole dish a creamy texture. It’s an easy option if you make cashew cream regularly and have some at the ready, or if you’ve got a powerful blender at home.

If you’d prefer to use a vegan cheese, that’s fine, too, and you can just sprinkle some onto each layer instead of drizzling the cream. (Lately my favorite is the Violife brand.) 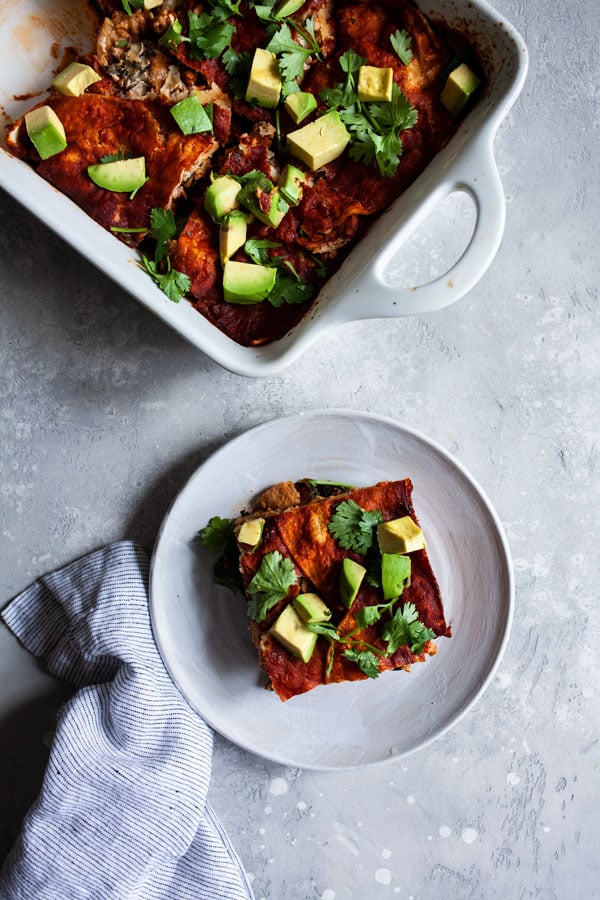 Aside from that, don’t let the name of “casserole” fool you. This couldn’t be easier to put together. If you like to make your own enchilada sauce and want to use it, go for it; I used the store-bought stuff for convenience, and the whole dish was assembled in about 20-25 minutes, including the time it took to make the soy curls. It’d be even quicker if you prepared them in advance. Here’s how to do it! 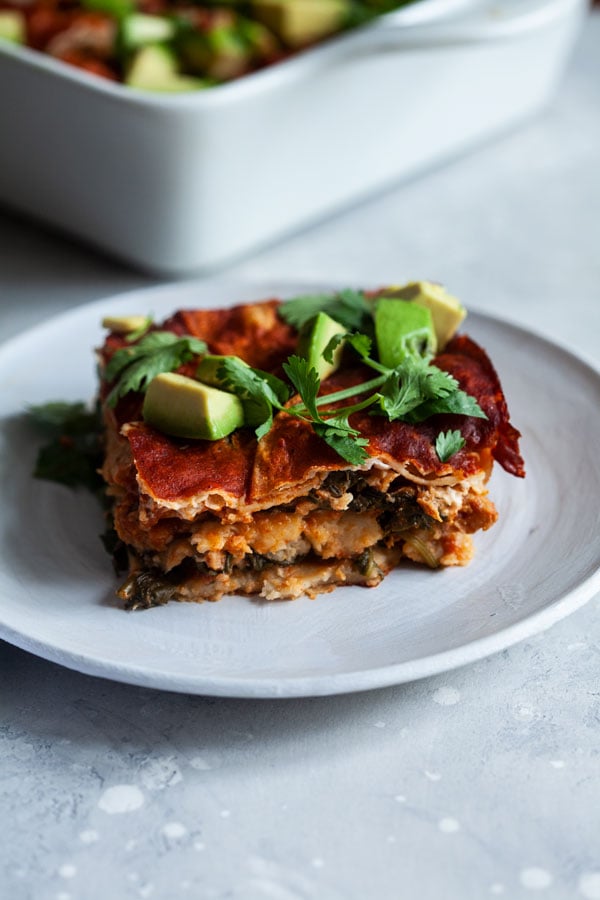 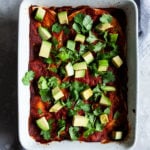 In place of the chick'n style soy curls in the recipe, you can use 20-25 ounces of your favorite seitan or jackfruit! 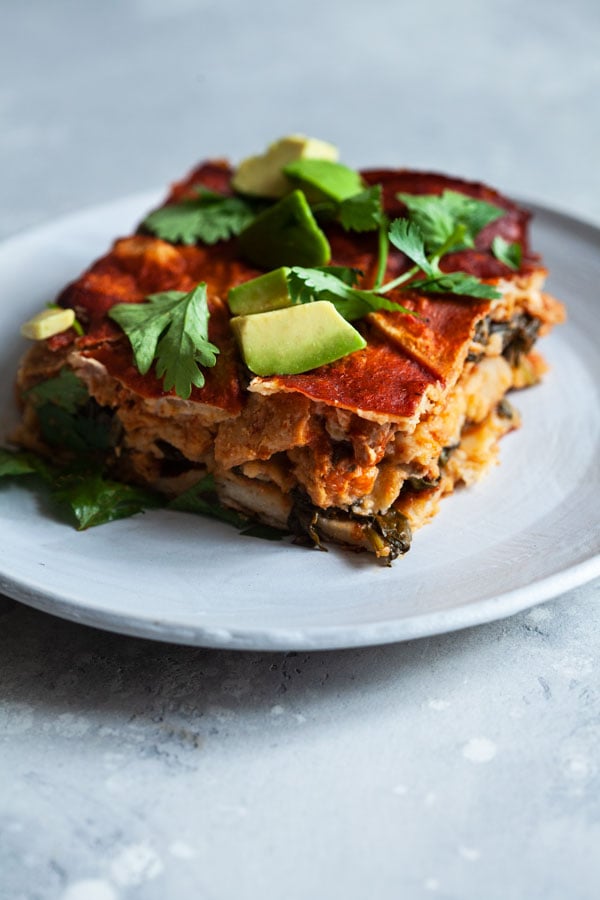 This recipe was inspired by a non-vegan version from my friend Ali. If you check out her post, you’ll get instructions on making homemade enchilada sauce, if you’d like to. I’d put this recipe into the “semi-homemade” category as it is, but preparing sauce from scratch will definitely give it a more wholly homemade feel.

Greens, protein, some starch from the tortillas: this is a breakfast formula that satisfies me and keeps me going happily till my morning snack. I haven’t always had breakfasts like this as an internship student; I’ve had more squares of baked oatmeal than I can count, sometimes a double dose of the whole meal muffins from Power Plates, sometimes toast if I can eat at home. Lately, it’s been microwaved oatmeal at work. But when I have the option of something savory and hearty and protein-dense, like this, I’ll always take it.

Enjoy, friends, and see you later this week.