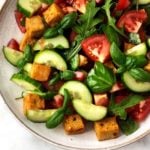 The only thing better than panzanella salad is cornbread panzanella! This version is made with vegan cornbread, juicy tomatoes, greens, and herbs. It’s a beautiful way to celebrate summer produce. 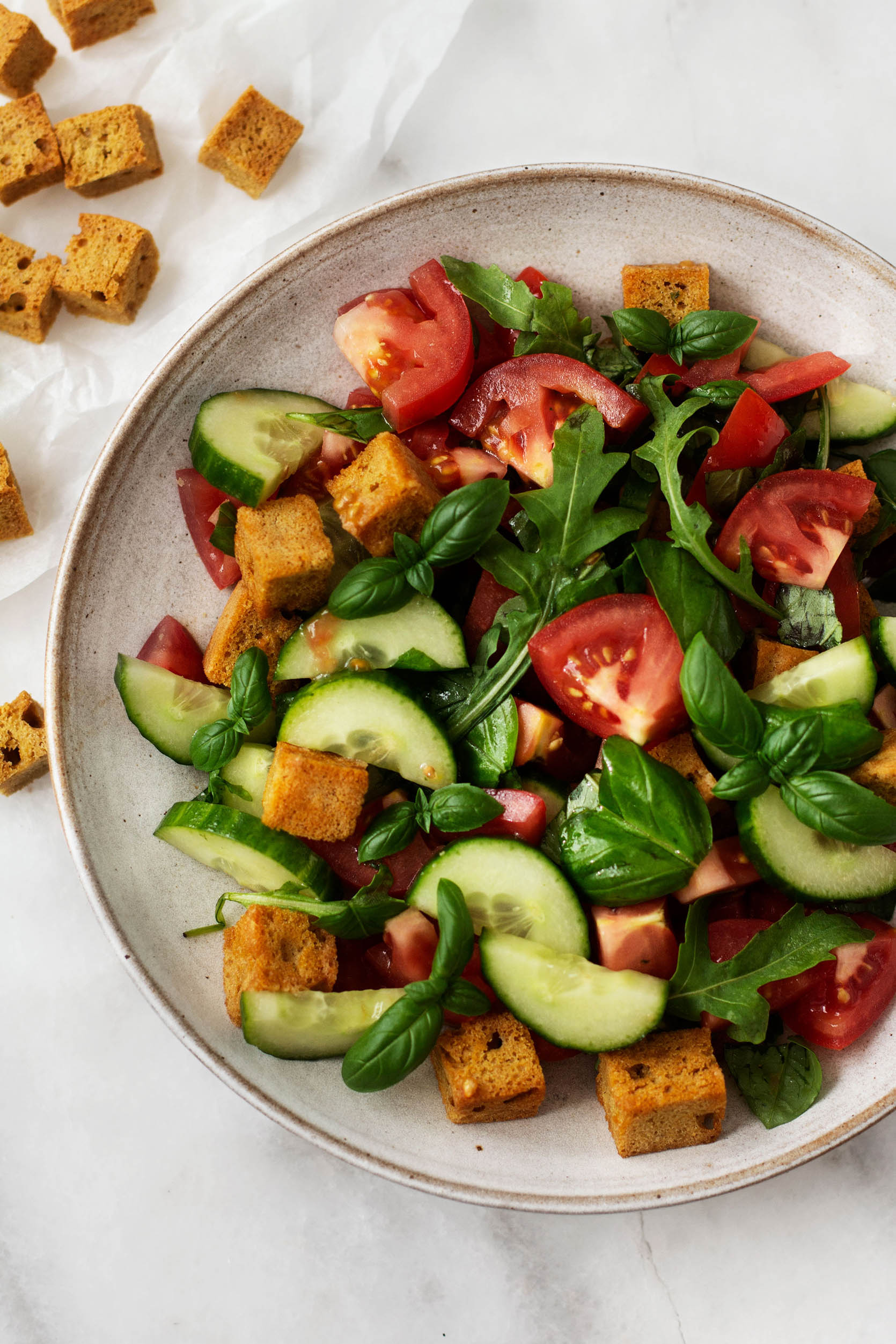 The idea for the salad began when I bookmarked this cornbread panzanella from Food52. It seems like ages ago that I did this. I was waiting both to have cornbread on hand and also for summer to arrive, so that I could prepare the salad with juicy, ripe tomatoes. Finally, it happened. The panzanella was everything I wanted it to be: fresh, filling, and quintessentially summery.

Do you have to use cornbread in this vegan cornbread panzanella? Of course not. A good, crusty whole wheat sourdough loaf, toasted spelt bread, or whatever you have will work just fine in a pinch.

But using cornbread in place of regular, whole grain bread—which is what I’ve always added to panzanella—does add something special. It’s heartier and more filling than regular bread, and it brings just a touch of sweetness to the salad. When you toast the cornbread cubes, they become crispy at the edges but remain super tender in the center, which makes them a perfect vehicle for soaking up all of the delicious tomato juices and dressing without losing their shape.

Aside from the cornbread, the recipe calls for tomatoes, basil, cucumber. The dressing is a simple shallot and red wine vinaigrette. I’ve used regular (Jersey or beefsteak) tomatoes and heirloom tomatoes in the salad. Heirloom tomatoes will add a variety of color and deep sweetness. But any ripe, in season tomato ought to be juicy and flavorful.

As I was putting the recipe together, I thought of all sorts of other ingredients I could add—pickled onions, roasted corn, etc. etc.—but in the end, my tomatoes and cucumbers were so fresh and perfect that I didn’t want to crowd them. It was the right call. The tomatoes and the cornbread are what shine in this recipe, and that’s as it should be. 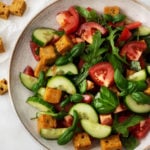 Leftover salad will keep well in an airtight container in the fridge overnight. In place of the cornbread, you can use sourdough or any other rustic loaf.

The cornbread can be prepared up to two days in advance, and it freezes nicely for up to six weeks! If you have some leftover, you can serve it with my beloved vegan chick’n bean chili, my cauliflower corn chowder, or my Texas caviar (another good dish for cookouts).

I hope you’ll enjoy this one while tomatoes are still at their peak. And, as we head into a long weekend, I wish you all rest, great food, and a celebratory farewell to the final days of summer. See you soon, for weekend reading.