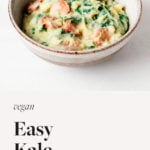 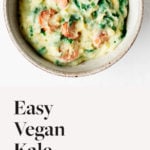 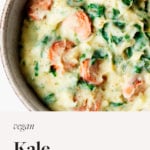 This is a fully loaded, vegan kale colcannon! It’s made with cooked kale and has the option of vegan meat for added protein and satisfaction. It’s super easy to make and the best comfort food.

Today’s dish is in honor of St. Patrick’s Day!

Colcannon is simple, rustic food at its best. It’s a mashed potato dish made with cabbage or kale, though the cabbage variety is more traditional.

Depending on how fancy you want to be, you can add chives, sour cream, butter, leeks, or vegan meat to the dish. I used to prefer a plain version, just potatoes with kale.

Now I nearly always add a vegan meat, which turns the vegan kale colcannon into more of a complete meal.

Is there anything better than loaded mashed potatoes? Honestly, I could eat them just about every night and be perfectly content.

Mashed potatoes are everything. They’re filling, comforting, and nutritious. White potatoes are sometimes framed as being non-nutritive foods, but nothing could be further from the truth. They’re rich in a lot of micronutrients, and they’re great sources of the electrolytes magnesium and potassium.

It’s worth saying that this isn’t an entirely traditional colcannon recipe. There are no leeks or cabbage, and I’m guessing that vegan bacon isn’t a standard addition.

But I hope that the recipe evokes the spirit of colcannon, even with a few idiosyncratic touches. Here’s what you’ll need to make it.

I like to use russet potatoes for this vegan kale colcannon, but Yukon gold potatoes will also work well. You’ll need about 2-2 1/2 lb potatoes. For me, this is about 3 large russets.

You can use oat, soy, almond, or cashew milk in the vegan kale colcannon. Just be sure to choose a non-dairy milk that’s unsweetened, since this is a savory recipe.

Any vegan butter you like is fine here. Choose one that works for your budget, taste preferences, and needs.

If you don’t have vegan butter at home, I recommend olive oil as a substitute. But the butter will taste better, and more traditional!

Kale adds nutrient density and color to the colcannon. I simply steam the kale before adding it to the mashed potatoes.

Feel free to use any other leafy green here. Beet greens, chard, spinach, or mustard greens will all work. Green cabbage will keep the colcannon traditional. Chopped cauliflower or broccoli florets would be wonderful, too.

Vegan meat is optional in this recipe. If it’s not your thing, feel free to skip it.

Honestly, though? I think it adds a ton of flavor! Vegan meat adds protein, too, which transforms the colcannon from more of a side dish to more of a main.

There are two types of vegan meat that I like to use in this recipe. The first is vegan bacon. I usually add about 5 slices, which I chop.

Vegan sausages, as pictured here, are also delicious in the kale colcannon! I usually slice a couple links of vegan sausage crosswise, sear them lightly in a frying pan, and then fold them in. The make the vegan kale colcannon so wonderfully hearty.

The toughest part of this recipe is steaming kale and boilng sweet potatoes side by side. The nice thing about the recipe is that you don’t have to sauté anything, unless you’re searing sausage pieces. After you take care of the boiling/steaming, you really just need to fold everything together.

I use a handheld potato masher for mashing the potatoes in the colcannon. For regular mashed potatoes, I really like to use a potato ricer. But this recipe is better, I think, with some texture. The handheld masher gets the perfect consistency.

Whenever I can, I mash the potatoes, fold the colcannon together, and then eat the recipe while it’s hot and freshly made.

With that said, the leftovers of the kale colcannon keep nicely. You can store them in an airtight container for up to four days.

If the mashed potatoes get a little gluey, you can reheat them in a pot, over low heat, and fold in a little non-dairy milk to loosen them up. 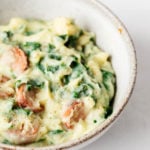 The real challenge of this vegan kale colcannon is to prepare it without eating half (or more) as you cook. It’s totally irresistible! The combination of creamy potatoes, fresh kale, and smoky plant meat is such a winner.

This is an ideal vegan recipe for St. Patrick’s Day, but frankly, it’s also perfect vegan comfort food for any time of the year. I hope you enjoy it!