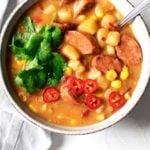 Corn season has officially arrived! I can’t think of a better way to celebrate than with this hearty vegan potato corn chowder.

This chowder has it all. Its got sweetness from corn, stick-to-your-ribs satisfaction from russet potatoes, and smoky flavor, as well as plant protein, from vegan meat. It’s also a simple, one-pot recipe that’s substantial enough to serve as a meal.

When I was throwing this soup together, I kept thinking of it as a chowder and calling it by that name internally. But what’s a chowder, exactly? How is it different from soup?

Vegan meat (or something similar)

This vegan potato corn chowder includes vegan meat. That can be either vegan sausage or vegan bacon, depending on what you have and like. I’ve now tested it with both. Veggie sausage and bacon will both lend a smoky flavor to the recipe, along with some protein. Including one of the two makes this a power plate, and it also helps to make the dish more filling.

If you can’t find, or don’t like, vegan meats, you can use something homemade instead. Try my lemon pepper tempeh cubes, my smoky tempeh strips, the tempeh sausage crumbles from Power Plates, or pre-baked and marinated tofu. You could also substitute a vegan beef-style crumble, such as the Beyond Beef Crumbles.

I used russet potatoes in the recipe, but yukon gold or creamer potatoes will work well, too. While I often think that sweet potatoes can be used in place of white in many recipes, I wouldn’t recommend them for this one. The combination of sweetness from corn plus sweet potatoes could end up overpowering other flavors in the dish!

You can choose your own adventure from the creamy element in this recipe. I used an unsweetened vegan creamer. There are many to choose from nowadays: soy, oat, almond, macadamia, and more.

If you don’t have, or can’t find, a plant-based creamer, you can substitute either full fat, canned coconut milk, or some of my all purpose cashew cream.

You can add heat, herbs, or something cheesy to the recipe with the garnishes that you use. I added fresh chopped cilantro leaves and chilis, which gave the recipe a kick of heat, as well as a fresh component. Vegan cheese shreds (cheddar or pepper jack style) would be delicious, too.

This chowder is simple to make in advance. In fact, like most soups and stews, it tastes more flavorful a day or two after it’s made. I enjoyed the leftovers for easy lunches a few days in a row. It’s also a great leftover dinner on a busy day. I served mine with a little salad and a square of my whole grain vegan cornbread; there are almost always a few slices of that in my freezer.

Speaking of freezing, the leftovers of the chowder can be frozen for up to six weeks. And if you prefer not to have too many leftovers in the first place, you can absolutely cut the recipe in half. 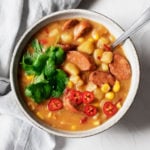 It’s still warm where I live, but it feels like August, which is to say that there is the faintest hint of fall in the air. With that, I’m starting to crave hearty soups, stews, and other comfort foods. Not that my taste for them is really diminished in summer, but my patience for cooking them is sometimes significantly lower.

The reality of September being around the corner feels complex this year. In a normal year, I’d be excited, since fall is my favorite season. This year it feels more bittersweet. Summer passed by so quickly in spite of my days being pretty repetitive. The ability to be outdoors feels especially precious with Covid in the picture. A part of me fears what the cooler weather will mean for the still delicate reopening of my city.

But fall is fall. And it’s a season that I love with all my heart, from start to finish. I doubt that’ll change, no matter the circumstances. For now, here’s to the sweetness and continued long days of August.