Try to think of ten classic, comfort food dishes that are as far from vegan as you can imagine. I’ll name some of the ones that spring to my mind: moussaka. Meatloaf. Stroganoff. Goulash. All of these are (traditionally speaking) full of ground meat and/or béchamel. And did you notice that all are hyperlinked? Those links take you to vegan versions of the traditional dishes in question. In my opinion, going vegan isn’t about relinquishing or learning to replace old favorites. It’s about finding innovative ways to create those same cherished dishes with plant ingredients.

Did shepherd’s pie come to mind for anyone? It was a standard “special occasion” dish in my home as I was growing up: layers of ground beef, onion, carrot, and a mashed potato topping oozing with butter and cream. Served, of course, with a generous sprinkle of parmesan cheese (we put parm on everything).

As you can imagine, before going vegan I’d have been flabbergasted at the mere thought of a vegan shepherd’s pie, let alone excited to create one. But I’ve now created two shepherd’s pies. I shared one two Christmases ago, and today, over at Food52, I have a new and much improved version of this most comforting and hearty of cold weather casseroles. 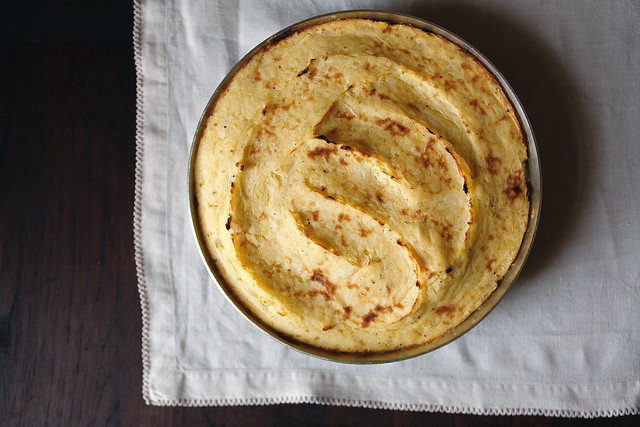 My original version of vegan shepherd’s pie was based on a recipe from a very old vegetarian cookbook. It had a ton of ingredients and steps, and though it was delicious, I found it very exhausting to make. My new version is, I think, every bit as delicious but much easier. It is a lentil shepherd’s pie with a potato and parsnip topping. It’s still a time commitment, but if you cook lentils a day in advance, and mash the potatoes and parsnips in advance of cooking the veggies and assembly, you’ll find it’s really a cinch to make. More importantly, I guarantee that you can serve this dish to hungry family and friends of all different eating styles, and count on them to be impressed!

With the holidays around the corner, it’s never been a better time for this one dish wonder. When you head on over to see the recipe, you’ll also get my five tips for building hearty, authentic vegan casseroles. If you’re just exploring plant based eating, remember: veganism doesn’t have to be a sacrifice of taste or pleasure. With the right preparation techniques and ingredients, vegan food will be as abundant, filling, and as celebratory of tradition as you want it to be.

All photos courtesy of Food 52.