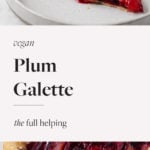 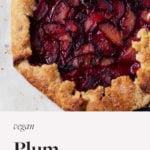 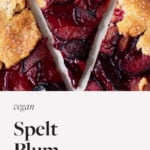 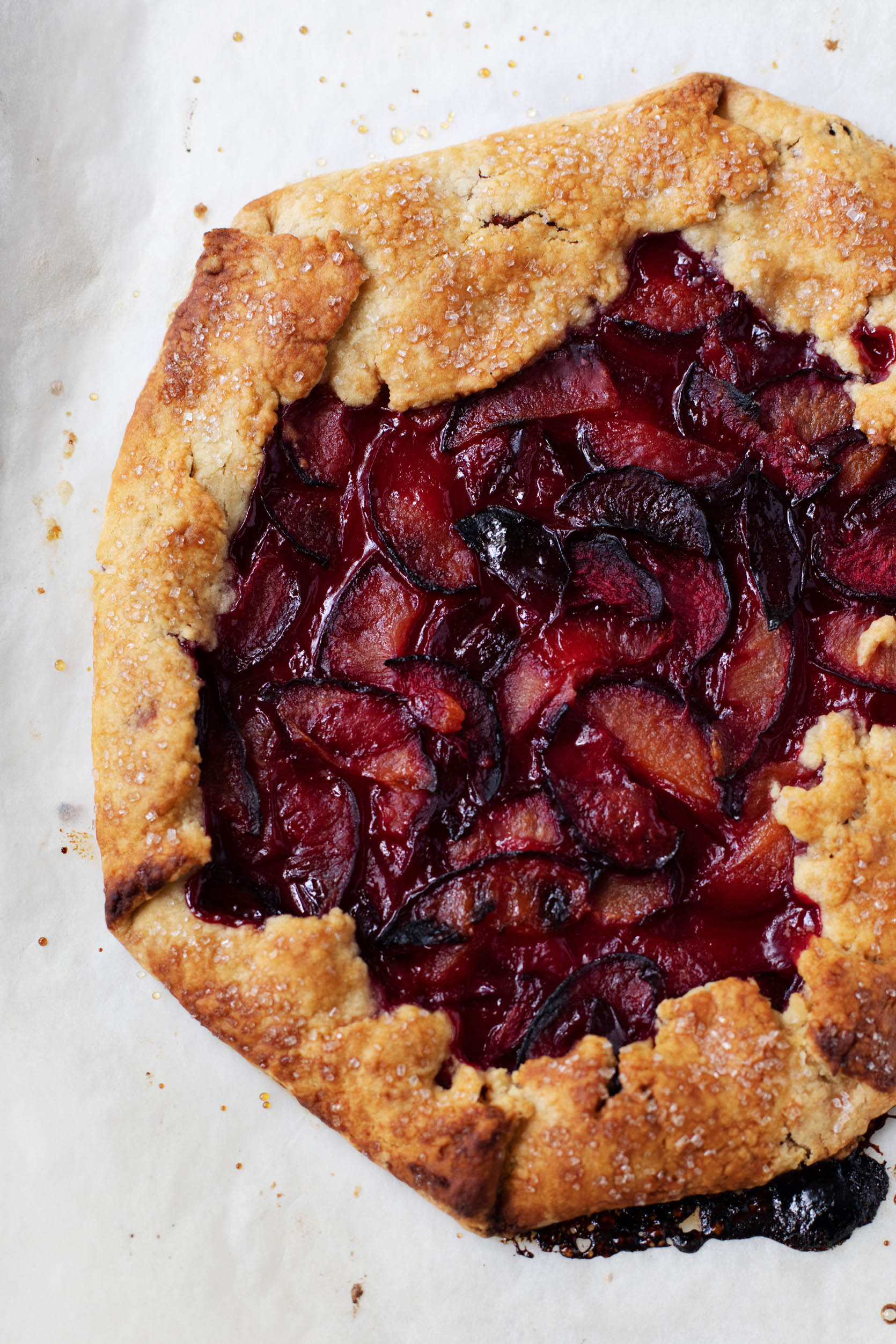 I’m not sure why it took me so long to get the hang of galettes. Overthinking probably had a lot to do with it! Sometime back in June, I finally made a galette that I was happy with. Since then, I’ve been making it with different combinations of summer fruit. This vegan spelt plum galette is my favorite so far.

For years I’ve read about how galettes are “the lazy person’s pie.” They’re supposed to be lovable for their low-maintenance shaping, so much simpler than, say, a lattice crust.

In spite of everything I read, I just couldn’t the knack of galettes. The first time I tried making one I filled the crust up before transferring it to a baking sheet. When it came time to transfer it, I wrecked it completely. The next few times my proportion of filling to crust was off. Usually, there wasn’t enough crust to go around.

I actually seemed to do a lot better with pies, even the more complicated ones with lattice crusts. The easiest explanation for this may be that I do well with instructions and precision. Cooking processes that call upon intuition are usually the ones that take me the longest to figure out. This is why I’m still getting the hang of sourdough, and why simple pasta dishes are so often tricky for me.

You only grow as a cook if you allow yourself to mess up. That’s the spirit that guided me as I made one more attempt at galettes this summer. I told myself that each bake was practice, and so it didn’t matter if I messed up. Needless to say, that’s when things came together. 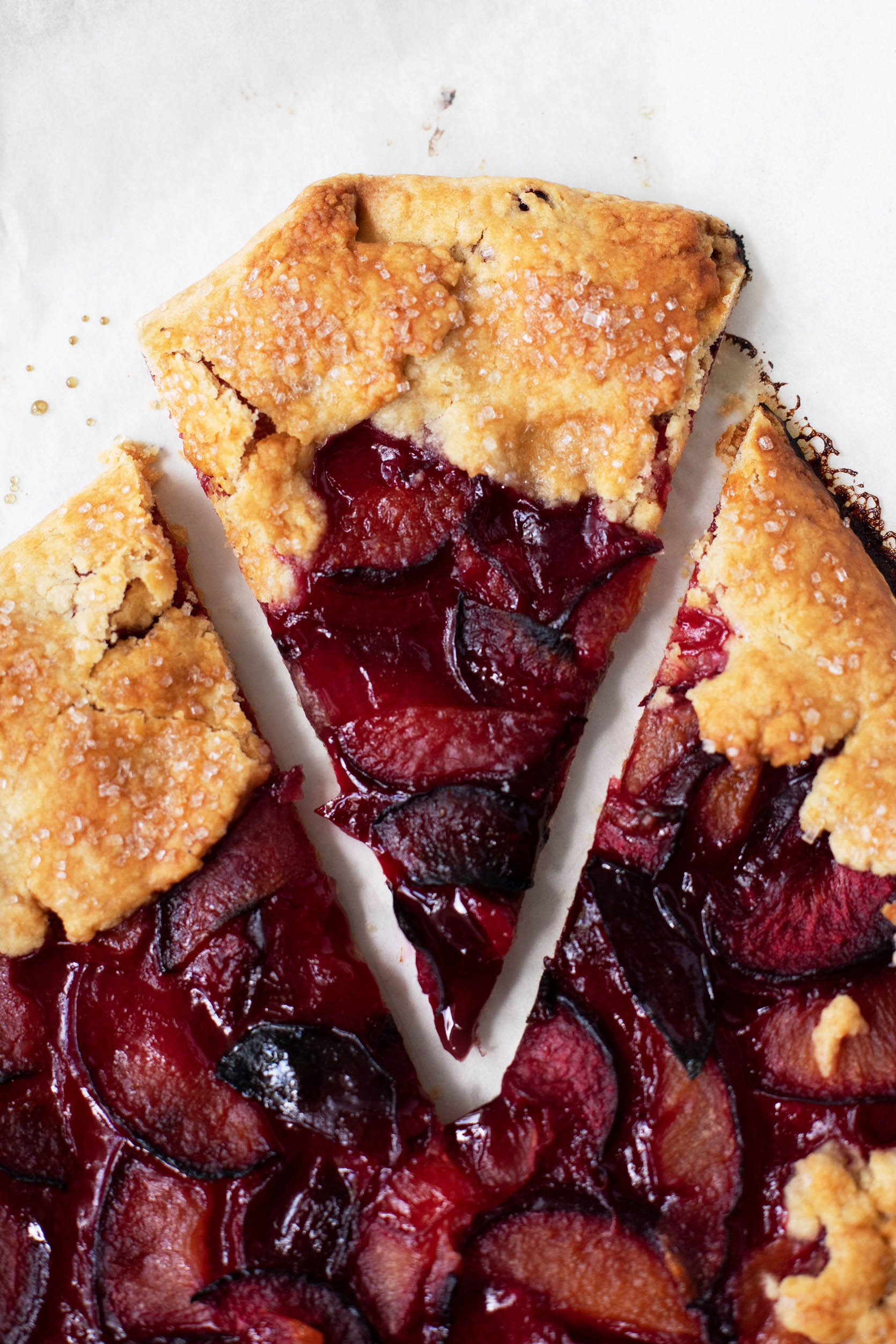 Trial after trial suggested to me that I needed to make a little more crust than most recipes called for. So I did. This ensures that there’s plenty of crust to fold over every side of the galette. Crust is delicious, after all, so it’s better to have a little extra than a skimpy amount.

Tip #2: Prepare your galette on a parchment lined baking sheet

I’ve found that galettes are very hard to move/transfer once they’ve been filled and folded. So, I recommend preparing the galette on a parchment lined baking sheet. That way, you can simply transfer it directly to the oven once it’s read to bake.

I think that pie crust is at its best when it’s allowed to get deeply golden and crispy. Sure, you want to avoid burning it. But a thoroughly baked crust has the nuttiest and most distinctive flavor. I bake this vegan spelt plum galette until it’s deep golden brown, the way I like it, even though it means a for more minutes in the oven than are typically recommended.

An all purpose + spelt flour combo

The first time I made the galette I used my go-to vegan pie crust recipe. It’s a modification of Martha Stewart’s pâte brisée recipe, and I halved it. I used all-purpose flour, but once I had a few good results, I started trading a third of the flour for whole wheat pastry flour.

Now I’m making the galette with spelt flour instead. I’m loving the slightly nutty flavor it adds to the crust, which increases with the longer baking time. You can use all spelt, too. If you do that, I’d recommend using light spelt flour, or else your crust may be a bit dense and difficult to work with.

I used sugar plums in for this vegan spelt plum galette. They have an oblong shape, and they’re wonderfully sweet. You can use black (Friar) plums, red plums, Mirabelle plums, cherry plums, or pluots in the recipe.

If you don’t like plums or they aren’t in season near you, you can actually use just about any fruit you like in the recipe. Keep in mind that really juicy fruits (like berries) may demand a touch more flour in the filling. I found this to be especially true of strawberries!

You can add spices of choice to the filling if you like. When I make this with apples in the fall, I’m sure I’ll add cinnamon, nutmeg, and perhaps a touch of allspice.

Galette crust, like pie crust, can be made a few days ahead of time and stored in the fridge until you’re ready to use it. You can also make the crust long in advance (up to six weeks) and store it in the freezer. Having frozen pie crust makes it easier to whip up a delicious fruit dessert at the last moment for friends.

Once the galette is made, I recommend storing leftover slices in an airtight container in the fridge for up to four days, or freezing for up to four weeks.

If you’re new to galettes or have had a hard time with them, the way I did, maybe follow this recipe closely for your first attempt. After that, though, you’ll probably have more delicious finished products if you take the time to make this whole process your own. 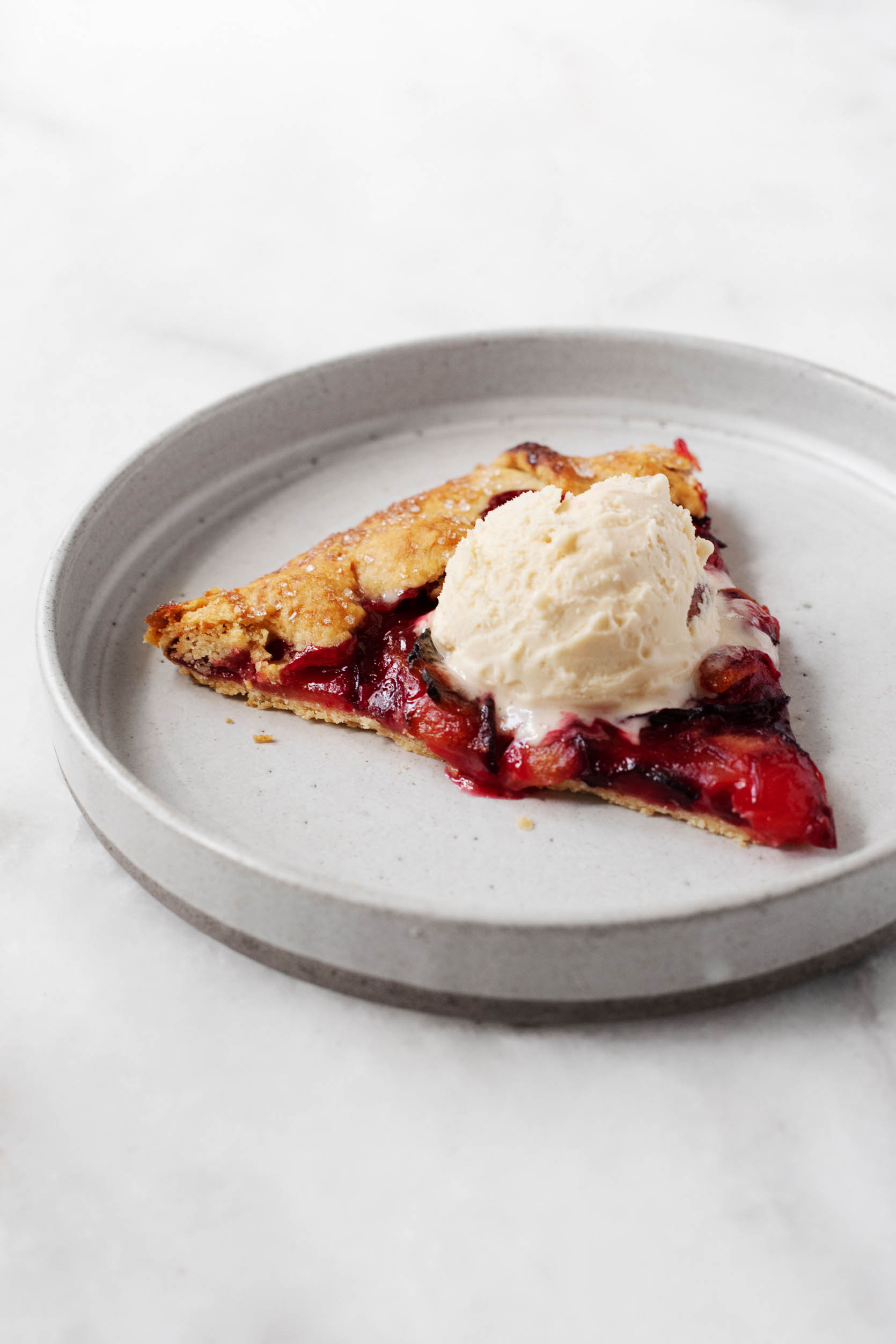 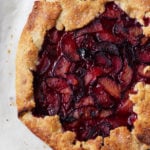 *You can also use 1 1/2 cups all-purpose flour, omitting the spelt, or you can substitute whole wheat or rye flour for the spelt. **You can also use 8 tablespoons coconut oil and increase the salt to 1/2 teaspoon, but I think vegan butter gives better results.

The galette is lovely the way it is; a friend of mine pointed out that part of its charm is that you can pick a slice up as if it were pizza. (Pie feels like a bigger and messier commitment.) If you’d like to, you can serve the galette with vanilla ice cream, even piling a scoop or two into the center of the galette before you cut and share it. 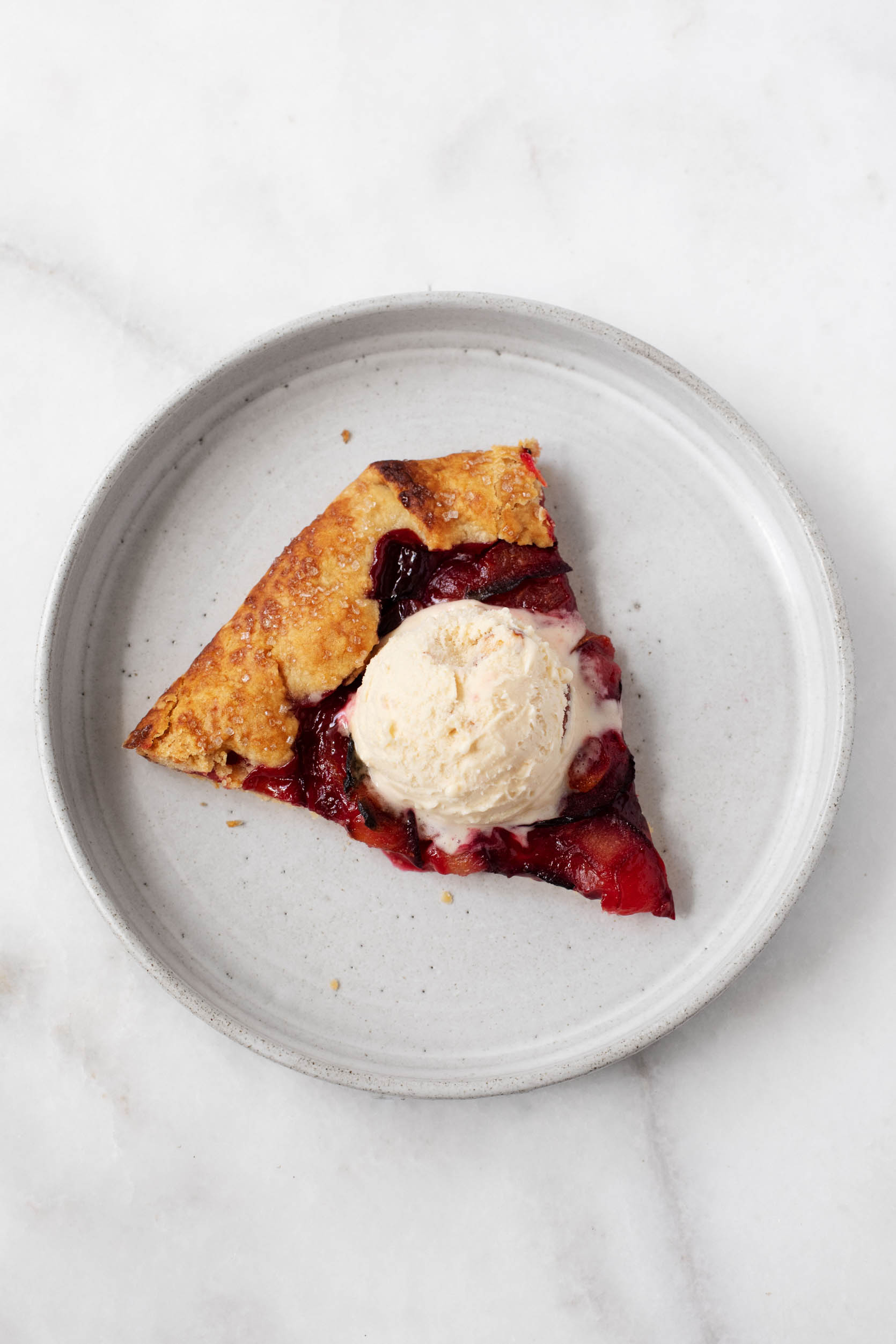 The galette will call upon your intuition at many points along the way. Once you try it a few times, though, I think you’ll find that it’s really easy and fun to make. That’s especially easy if you make and chill the crust in advance.

There’s plenty of summer fruit ahead of us, and while it’s all ripe and juicy I hope you’ll get a chance—if you’re so inclined—to make and share this tasty vegan dessert. Let me know if you have any questions!