There’s really nothing better than a dessert that’s both deeply satisfying and also easy to make. This luxurious cashew chocolate pudding is exactly that.

I have a weakness for all forms of creamy chocolate goodness. This includes chocolate pudding, chocolate mousse, chocolate pots de crème, and chocolate soufflé—though I’ll let you know the day I have any luck making a vegan soufflé 😉

A quest to find the perfect chocolate pudding

I’ve tried a number of bases for vegan chocolate puddings, and I’ve had success with them.

Silken tofu chocolate pudding is a real favorite of mine. Silken tofu is easy to work with, and it imparts some nutrition—especially plant protein—to a tasty dessert.

Avocado can also make a great chocolate pudding. This is a technique that I learned when I was really into raw food. The avocado isn’t detectable, and it creates a silky, rich base for pudding when it’s combined with cocoa powder.

Surprisingly enough, I’ve even used pumpkin as a chocolate pudding base. If you add some fat for creaminess—I add cashew butter—it creates a lovely, versatile pudding that’s nice for fall.

The magic of cashew cream

My all-purpose cashew cream is the luxurious blend that adds creamy texture to my pastas and lasagnas, casseroles and gratins, scones and pies.

This cashew chocolate pudding uses a similar cream, though it’s slightly thicker and richer than my regular cashew cream. The results, however, are the same: luxurious, rich texture, all without traditional dairy.

How to make cashew chocolate pudding

Fortunately, the process of making this pudding is very easy.

You’ll start by blending up your cashew cream.

Normally I recommend either a food processor or a blender for this job. For this pudding, however, the cashew cream should be even more silky smooth than usual. For this reason, I recommend using a high-speed blender, such as a Vitamix or Breville Super Q.

You’ll also add guar gum to the cashew cream. The guar gum functions to thicken the cream, which in turn will thicken your finished pudding.

Next, you’ll warm the cashew cream in a saucepan. You’ll add cocoa powder and sugar once the cream is warm, stirring to dissolve.

Next, you can add vegan dark chocolate to the warm cream and cocoa.

Finally, it’s time to serve the cashew chocolate pudding. I think it’s fun to garnish it with chocolate shavings! They look pretty right when the pudding is served, and they’ll melt into it (yum!) as you dig in.

A few notes on the main ingredients that the recipe calls for:

Raw cashews work best for cashew cream, rather than roasted. Be sure to soak the cashews for 3-4 hours, or overnight, before you blend them up into cream. You’ll drain and rinse them before blending.

In a pinch, you can soak the cashews for only one hour in boiling hot water.

Any dark chocolate that’s vegan is fine here. I love baking with this this one.

Any unsweetened cocoa powder will work in the recipe, but if you’re looking for a recommendation, I personally am crazy about this one. It has a deep, but not bitter flavor that is wonderful for desserts.

Guar gum serves to thicken this pudding. It’s a really useful ingredient in gluten-free baking, but it can be costly. If you’d like to substitute the guar gum, then I recommend blending two teaspoons of cornstarch or arrowroot powder into the cashew cream instead.

The pudding recipe calls for cane sugar/granulated sugar as a sweetener. You can use coconut sugar to replace it if you like.

Cashew cream can also be frozen for up to six weeks.

Once prepared, the cashew chocolate pudding will keep for up to three days in an airtight container in the fridge.

Four years ago, I crossed paths with Fran Costigan. She’s the queen of vegan dessert, but I’d never had the pleasure of meeting her.

I ended up standing next to Fran in the appetizer line at a vegan event. I introduced myself, and before I knew it we were chatting like old friends.

Fran told me all about journey to becoming a chef, her grandkids, and the several decades she’s spent sharing vegan activism through sumptuous, dairy-and-egg-free desserts.

I was totally charmed, and we’ve remained fans of each other’s work since.

This cashew chocolate pudding is one of Fran’s recipes. It appears in her wonderful book, Vegan Chocolate. Vegan Chocolate is 300 pages of chocolate bliss. It’s a primer in all things chocolate: cake, brownies, truffles, puddings, ice creams, and more.

Some of the most creative selections from the book include Bittersweet Chocolate Truffles (with flavor variations), a Brooklyn Blackout Layer Cake, a Sacher Torte, even chocolate Moon Pies.

There are two particular features I love about book. First, Fran emphasizes ethical chocolate, recommending ingredients that are fair trade and organic.

Second, Fran is sensitive to food allergies and specialized diets, so virtually everyone, including folks who have soy or gluten or wheat allergies, will find plenty of recipes to make and love in the book.

Most importantly, Fran treats each recipe as a chance to teach you something new about working with vegan chocolate. Her years of culinary teaching experience are so evident. I’ve benefitted from her detailed explanations and extensive glossaries and suggested resources.

So much love and effort has gone into this book; I suppose that chocolate deserves nothing less!

In my mind, there’s no such thing as too much chocolate. Here’s a little list of my other favorite, 100% plant-based chocolate desserts: 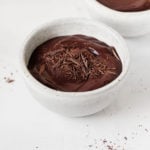 I hope that you’ll enjoy every luscious spoonful of this plant-based dessert!