Hello, everyone. I hope you had a lovely weekend. This is probably the last weekend I’ll spend in D.C. that doesn’t involve packing, or living among boxes, which is bringing up all sorts of nostalgia (mixed with excitement to be back in New York). More on that soon. For now, weekend reading. 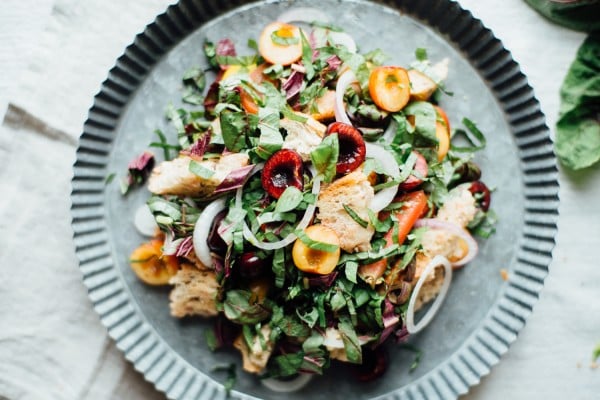 1. First up, a gorgeous amaranth and cherry panzanella salad from Dolly and Oatmeal. So, so pretty. 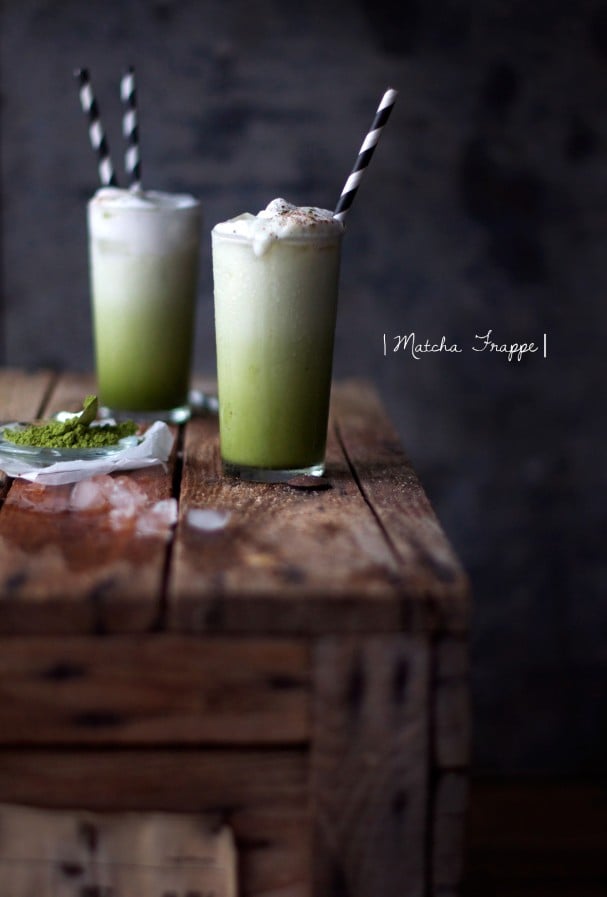 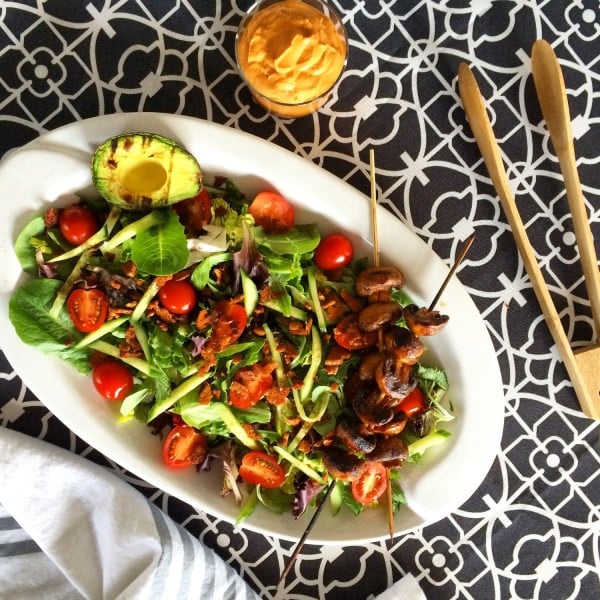 3. Boy, is this my kinda salad. Tempeh bacon, lettuce, and tomato salad with smoky mushrooms and creamy cashew tomato dressing. So much flavor and color! 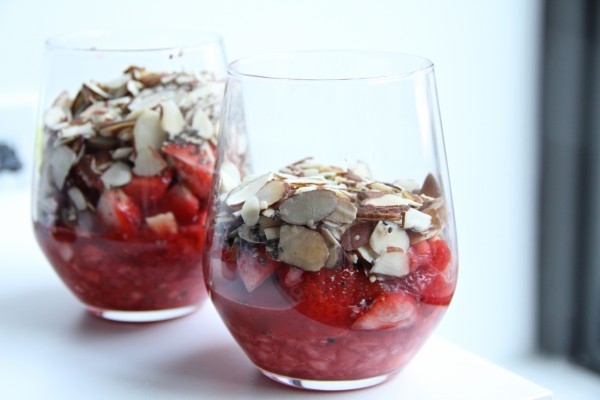 4. Love the look of these simple strawberry breakfast parfaits from Genevieve of Gratitude & Greens. 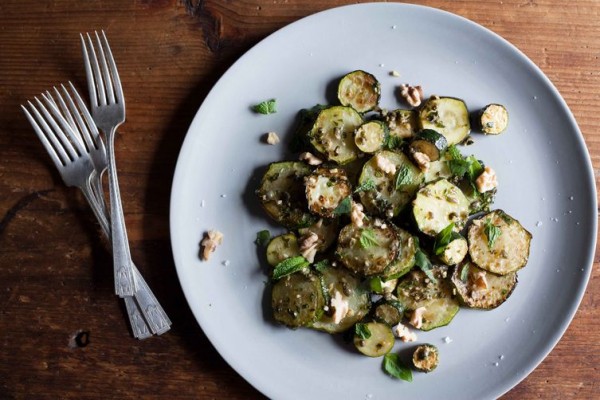 5. Simple, seasonal, and delicious: sauteed zucchini with basil, mint, and walnuts. This is happening, this week.

1. An interesting article about oxytocin. This hormone, which is produced by the hypothalamus and secreted by the posterior pituitary gland, is best known for its role in facilitating childbirth and lactation. But it also plays a role in sex (specifically, it’s involved with orgasms for both men and women) and in social bonding; it may also help to promote feelings of trust and contentment (and it is hindered, not surprisingly, by high levels of stress). New studies now suggest that it may also aid in muscle repair, which could have implications for helping the elderly, who are susceptible to significant muscle generation. Cool stuff.

2. A throwback post on Our Hen House: Piper Hoffman on some of the arguments against ethical veganism (including the well-debunked argument that veganism kills more living creatures than non-vegan diets). Smart, succinct, to the point.

3. A fairly harrowing article, from Joshua Katcher (who writes his own blog, The Discerning Brute, and curates The Brave Gentleman, which is a supercool website for upscale mens’ suiting and footwear, all vegan) about wool production. Warning: graphic videos are included. I’m often asked why vegans don’t wear wool; don’t the sheep want/need to be sheared?

Well no, not exactly. Undomesticated sheep will grow only as much wool as they need to protect themselves from their climate. Before the invention of shears, wool was plucked by hand from sheep during their molting season. The rise of commercial wool production meant that sheep were suddenly forced to produce year round. Shearing can leave sheep vulnerable to cold weather in the winter, and excessive wool growth can alternately make them susceptible to overheating in the summer. Many sheep in the industry die from poor nutrition. Merino sheep have been bred to have more flaps of skin than other sheep (more skin means more surface area on which wool can grow). Flies can often lay eggs inside these folds, resulting in pain and maggot infestation, so farmers will cut the folds off–usually without anesthesia–in a process known as “mulesing.” At the end of all this, sheep who have stopped producing wool are often sold for meat.

It’s definitely possible to support wool producers who are more sensitive to animal welfare, but this may involve homework, and it’s hard to know whether or not any suffering came to the sheep involved. My personal discomfort purchasing wool also stems from the fact that (for me) it underscores animals’ commodification, which in the long run reinforces our validation of holding them captive and using them for our own purposes.

Total honesty: I still own some wool. And some of it was wool that I purchased after I went vegan, so I’m reasoning with myself here, not preaching. No one’s perfect, and I’ve been far less than perfect with my very slow, stubborn, and reluctant transition to a vegan wardrobe. But articles like these remind me to continue pushing myself.

4. An interview, via the MIT Technology Review (which always has pretty incredible articles pertaining to neurology, biology, and medicine) with Antonio Damasio, a neuroscience professor who has taken tremendous interest in studying emotions, when others in his field have dismissed emotion and feeling as uninteresting. From the intro to the interview:

“Damasio’s essential insight is that feelings are “mental experiences of body states,” which arise as the brain interprets emotions, themselves physical states arising from the body’s responses to external stimuli…He has suggested that consciousness, whether the primitive “core consciousness” of animals or the “extended” self-conception of humans, requiring autobiographical memory, emerges from emotions and feelings. His insight, dating back to the early 1990s, stemmed from the clinical study of brain lesions in patients unable to make good decisions because their emotions were impaired, but whose reason was otherwise unaffected—research made possible by the neuroanatomical studies of his wife and frequent coauthor, Hanna Damasio. Their work has always depended on advances in technology. More recently, tools such as functional neuroimaging, which measures the relationship between mental processes and activity in parts of the brain, have complemented the Damasios’ use of neuroanatomy.”

It’s interesting stuff. Check it out.

5. An opinion piece from David Kessler, M.D., published in the New England Journal of Medicine, about new proposed food labels. The essay highlights both their strengths and the areas where quite some work remains to be done. In particular, he’s concerned that the new labels will continue to focus too much on specific nutrients, and not enough on encouraging folks to a) eat whole foods, and b) fill half of their plates with fruits and veggies at each meal (already part of the Dietary Guidelines recommendations). I like his thoughts. Worth a read.

And on that note, I’ll see you all tomorrow!