After one week off, it feels like a while since I’ve checked in for the weekend roundup! It’s good to be back. And I’m back at the very start of a week long break between DI rotations. I haven’t quite settled into it yet, but I have high hopes for some rest, some cooking, and some time with Ashley, who’s coming to visit later this week.

A few weeks ago, I wrote about riding an ugly wave of body dysmorphia, my most intense in a long time. Three weeks later, things are different. I haven’t quite crawled out from under it yet, but it’s less hot and angry and persistent than it was. I’m not relating to food with the harmony that I’ve built in recovery, and which has become my norm in recent years. But I’m not suffering, either. I’m recalibrating.

One realization that has emerged is that the dysmorphia wasn’t—isn’t—quite like it used to be. Yes, some of the triggers are familiar. I don’t doubt that the change and disruption and lack of control associated with the DI has stirred things up. But I see now that the unease I was feeling in my skin was also a reaction to a situation, a relationship, that wasn’t right. I wasn’t consciously registering the fact that it wasn’t right, but my body was communicating it to me all the same. And a sure sign that I did right to change the situation was my body easing back into a place of greater balance once I had.

This is new. I’m accustomed to regarding dysmorphia or torment around food as passing shadows of my disorder. It’s never occurred to me to interpret body struggle as a signaling system, or an alert that something in my life, rather than something within me, is amiss. Coming to this realization has actually reframed my experience of body dysmorphia, at least this time around. It has given me an appreciation of what I was feeling a few weeks back, which—no matter how painful and raw—were actually protective to some degree.

When I was in recovery in my early twenties, my therapist at the time suggested that anorexia might have served a protective role for the many years in which it dominated my life. Her point at the time, which my current therapist has echoed, is that the fixations and distractions of my relationship with food and self-deprivation might have sheltered me from realities and realizations that I wasn’t yet ready to deal with.

That resonated, and it still does. But I think that whatever protection the recent unease has afforded me is different, and new. It’s a communication system, my body’s way of telling me when I’ve found myself back within patterns—interpersonal or otherwise—that I’ve worked hard to break. And because it encouraged me to acknowledge things that my conscious mind had been refusing to see, I have to extend my body a thank you. It communicated to me in a way that was alarming, but it did send me an important, truthful message.

No matter how many years I spend writing about the recovery process, it never stops taking me by surprise. For all of its mess, recovery has taught, and continues to teach me, so much. I’m not at peace with my body tonight, but I am in conversation with it. It has things to tell me. And I’m listening. That’s something to be grateful for.

Have a good Sunday, friends—and here are my recipes and links from the week past. 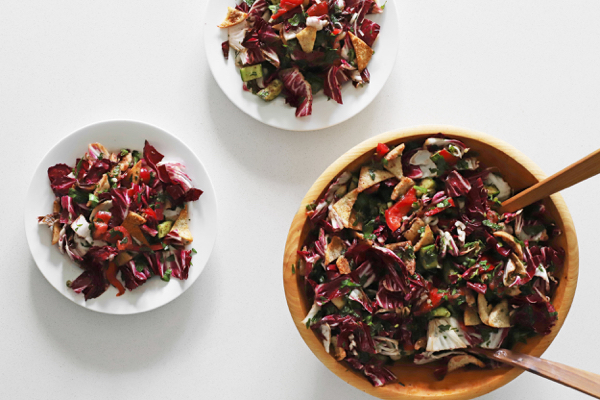 A gorgeous spin on fattoush salad for the fall, featuring grilled radicchio. 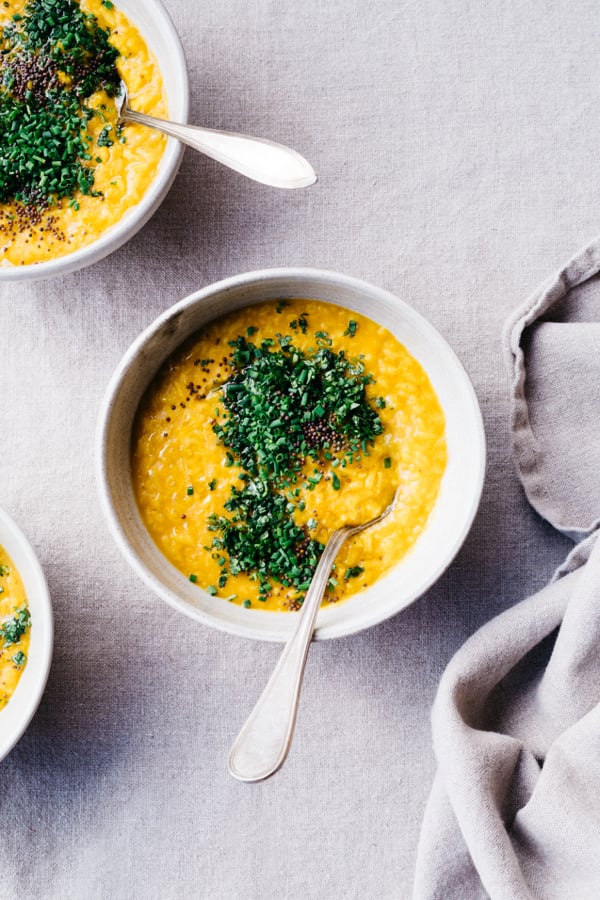 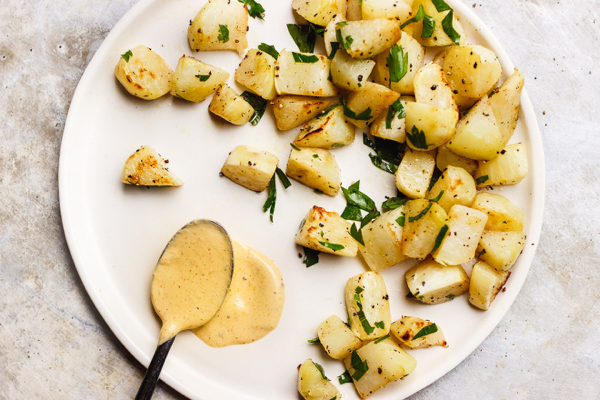 I don’t cook with Kohlrabi nearly enough, but Sherrie is inspiring me with her lovely dish of roasted kohlrabi and creamy (vegan!) Old Bay dip. 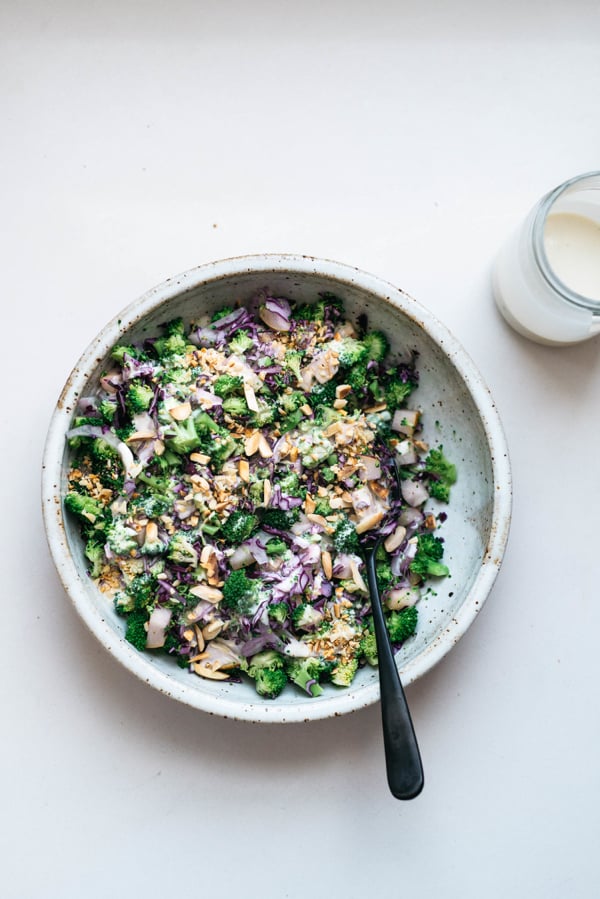 I seem to be all about the veggie-packed fall sides this week! Another awesome creation: Lindsey’s creamy, dairy free broccoli chop. 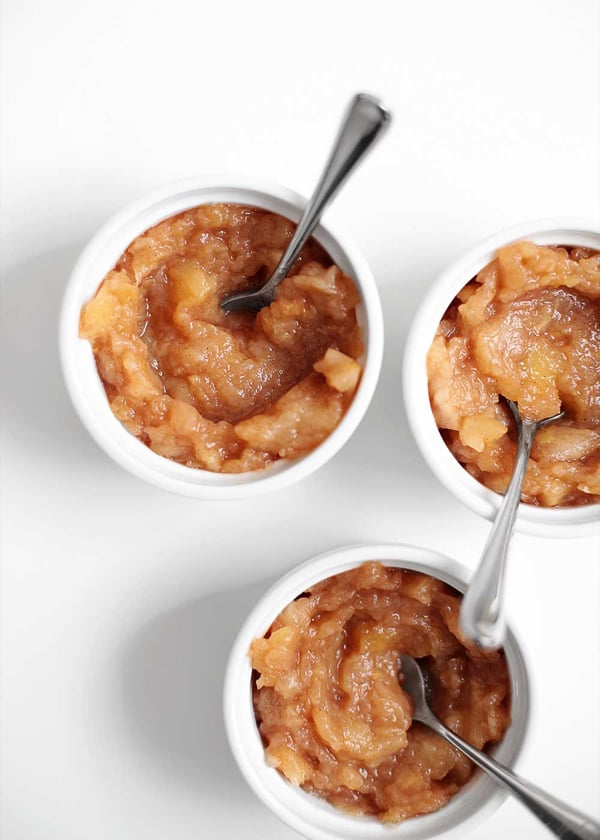 Finally, what speaks autumn, and comfort, and home, and tradition, more than a batch of homemade applesauce?

1. Like Emma, I’m a firm defender of the boiled vegetable.

2. As part of its Overlooked series, The New York Times profiles Yamei Kin, the Chinese doctor who worked to introduce tofu—and by extension, the health benefits of soy—to Westerners in the early 20th Century.

3. Meanwhile, Quartz profiles Barbara Lipska, a neuroscientist who suffered a major episode of mental illness in 2015 and has been endeavoring to understand how people lose their minds ever since.

4. Hakai takes an illuminating look at the relationship between man and bears through time. In present time, the article travels to British Columbia, where the two animals continue to live as neighbors.

5. Finally, The Cut talks to Nigella Lawson about her career in food writing. I really appreciated what she had to say about food culture in the 90s, which her work grew in reaction to:

I think what it was, too, particularly for us in the U.K., it was meant to be the age of our great culinary renaissance, the ’90s. But it was very much taking place in restaurants. So, people started thinking they had to cook like that at home.

…what had propelled me was going to a dinner party at a friend’s house. We sat in her sitting room, at her table, and she was in the kitchen cooking quite elaborate food. And we could all hear her crying loudly in the kitchen. Everyone was getting quite awkward. It was not an easy evening. And I thought, “No food is worth that. Better to call in a pizza.” I thought, “Something’s going wrong here, that people think they have to perform.”

It’s taken me a long time to cook for loved ones without any sense of pressure to perform or wrestle with my own ridiculous standards. If I’ve learned anything, it’s that simple food, prepared in a spirit of ease, is the best way to bring folks together at the table.

I’m wishing everyone a restful night. I know the week ahead of me will go quickly, but I’m ready to be present for every moment of it, and I’ll be back to share one of my recent low-key, weeknight-friendly, vegan suppers with you all!

Happy Saturday! And thank you for all of the wonderfully supportive comments about the name change of this site. I was definitely feeling some jitters before the announcement, but everyone has been so kind and so cool. If you’re still not getting redirected to The Full Helping, try clearing the cache or temporary files on your computer and iPhone. And if that doesn’t work, feel free to shoot me an email (gena@thefullhelping.com) or track me down on social media to let me know!…