It’s time for me to tell you about The Vegan Week.

That’s the name of my next cookbook, which will be out this coming winter. 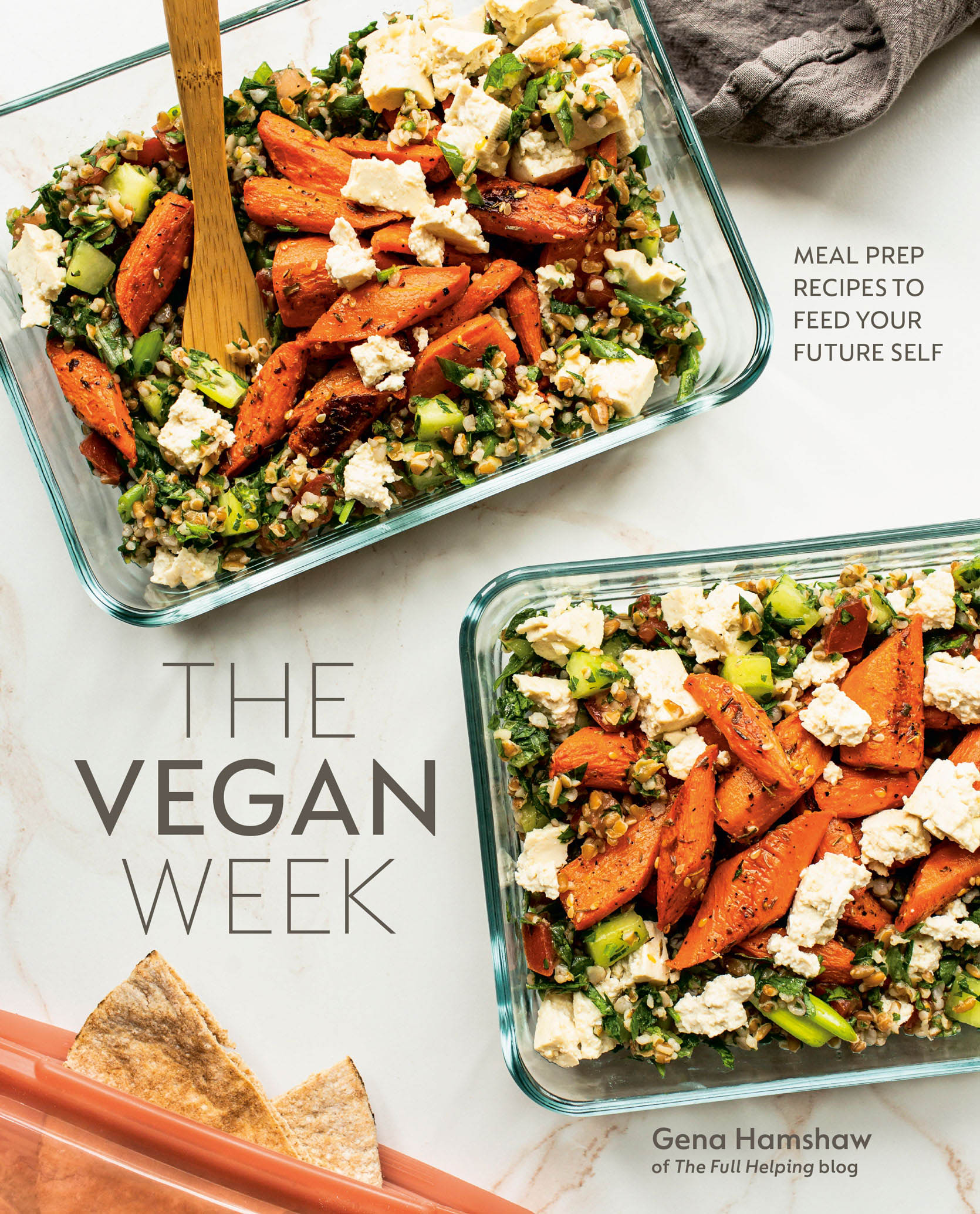 I’ve mentioned the book and all of the ups and downs I had in writing it a few times already. Yet it’s surreal to be talking about it in concrete terms. There have been so many moments along the road to its creation when I was sure that I wouldn’t, or couldn’t, finish.

I started writing this thing in April of 2020. Lockdown had just begun. Faced with the prospect of weeks of solitude—weeks that turned into months, as we all know now—I was grateful to have a big, creative project on my hands.

As it turned out, recipe development was as hard a task as every other task seemed to be in the quarantine months. In spite of the fact that I had ostensibly more time than usual, I couldn’t seem to do much of anything.

Cooking was especially hard. Each time I opened Instagram, I was flooded with posts about home fermentation and images of people proudly showing off their #quarantinecooking.

Meanwhile, I’d never felt less inspired to cook. When I say that I survived the pandemic thanks to Gardein meatballs, I’m not kidding.

This made recipe development for a cookbook, which is a challenge even under normal circumstances, feel downright impossible.

To make matters trickier, I was writing a book about meal prep, the habit that had sustained me throughout my clinical internship year. As The Vegan Week will ultimately detail, I think that planning is the most important step in meal prep; everything else, including the cooking itself, is secondary.

How ironic it felt to be writing a book focused on planning at a moment when I couldn’t picture what I’d be doing one hour, let alone one week, into the future.

I look back now and give myself grace for all of the mental fuzziness and disorder of that time. In the moment, though, I found my total lack of self-organization to be crazy-making.

My memory of the first year of writing The Vegan Week is big blur. I wasn’t focused, and neither was my recipe execution. Most of what I made was OK at best. Much of it was unsalvageable. Occasionally I’d make a winner.

I remember an apartment littered with dirty dishes and the tedium of constantly cleaning my small kitchen space. These are normal circumstances for cookbook writing, but their exhaustive toll was heightened in the monotony of early Covid. And they were especially frustrating because my labor wasn’t yielding much creative fruit.

Occasionally I’d look back on writing Power Plates and feel bewildered. When I wrote that book, I was in grad school, working hard, and coping with the fallout of a failed relationship. Life was stressful, but writing the book was mostly enjoyable—a few blockages mixed with a lot of creative flow.

It makes sense, though, that a busy period of life would have lent itself to cookbook writing. Creative work is easier for me when it’s adjacent to the inspiration and fuel of living.

It was different with The Vegan Week. Shut up at home, removed from the people and activities that normally bring me joy, I felt as if my creative lights had been turned off.

Not surprisingly, I was able to focus more as life opened up again. Emerging from lockdown was cause for me to celebrate life in a way that I hadn’t in a long time, and my love of cooking is part of that life. 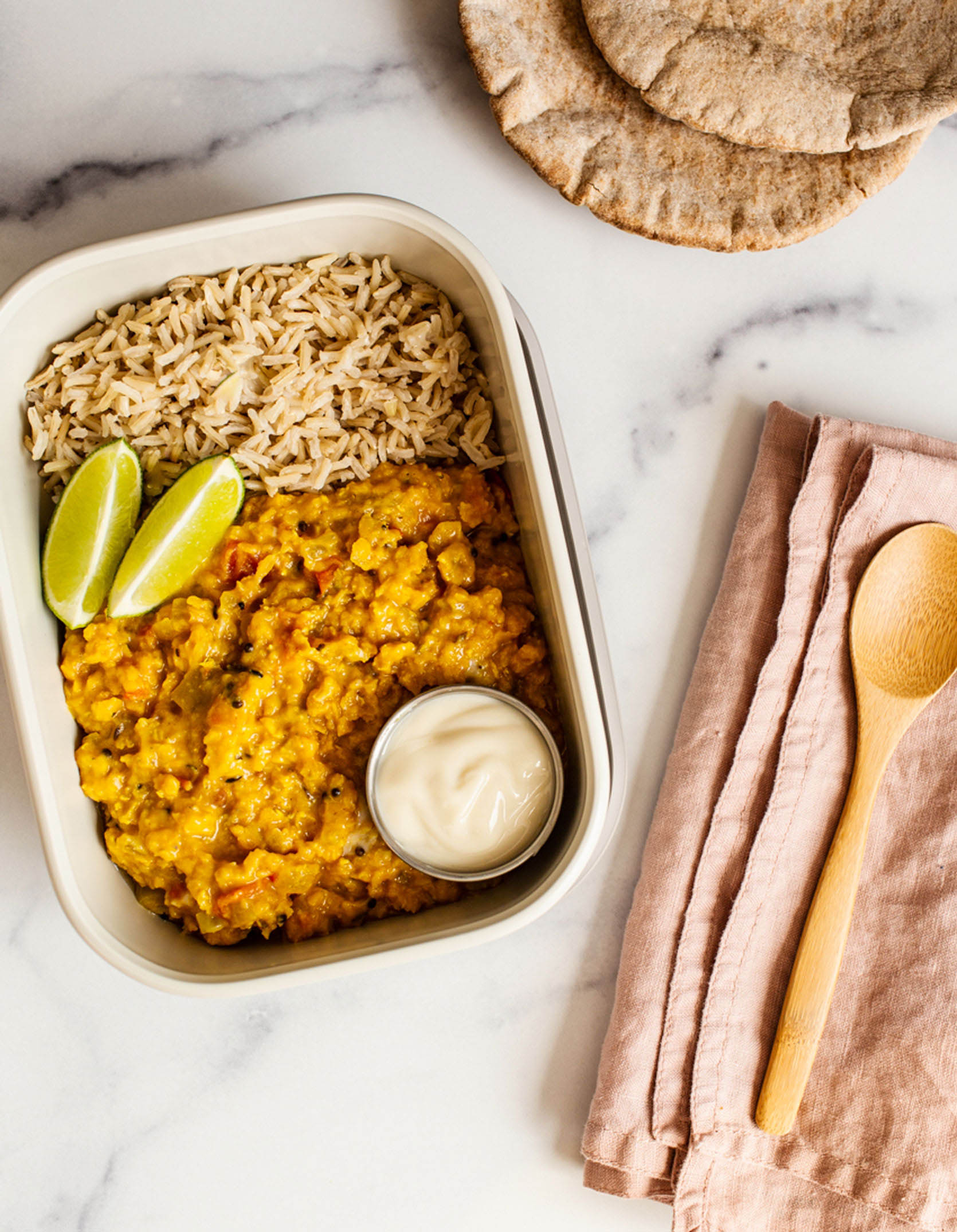 If you ever explore The Vegan Week, you’re going to read that meal prep is the reason that I manage to cook with any consistency.

I love food so much that I’ve shaped a career around it. But the truth is that I go through long phases of ambivalence (sometimes even downright avoidance) with cooking. If I make cooking contingent on the desire to cook, I’ll inevitably have weeks, or even months, of not cooking at all.

If I commit to doing some meal prep every weekend—with the understanding that it’ll be involved on some weekends and pretty basic on others—I keep cooking. It’s that simple.

You cherish every creative project in a way that only reveals itself with time. The source of that tenderness becomes even clearer when other people have had a chance to interact with the thing that you made.

I love Choosing Raw in spite of the fact that I pretty much don’t eat raw food anymore because it’s the first big thing I wrote. And it ended up being my affectionate farewell to a dietary emphasis that no longer served me.

I love Food52 Vegan because it made me think about how I’d present vegan food to people who weren’t vegan. In doing that, I learned to create recipes that were more approachable than what I’d shared in the past.

I love Power Plates because it’s a celebration of the balance that I’ve worked so hard to achieve with food. And because I pester my nutrition clients (with gentle humor, of course!) about the importance of representing all macronutrient groups on their plates.

Time will tell, but I already know that I’ll have special affection for this book precisely because the process of creating it was so bumpy. I’ll remember it as a thing that came into being in spite of the pandemic that stopped life as we knew it.

Most of all, I will always love this book for capturing the habit and process that keeps me cooking.

One of the nice things about entering this new decade is that I’m more able to meet myself where I’m at. That means acknowledging and finding solutions for areas of my life where I struggle, rather than constantly trying to become someone who doesn’t struggle at all.

I struggle with cooking often. That’s why I meal prep.

Here’s what you can expect from the book: 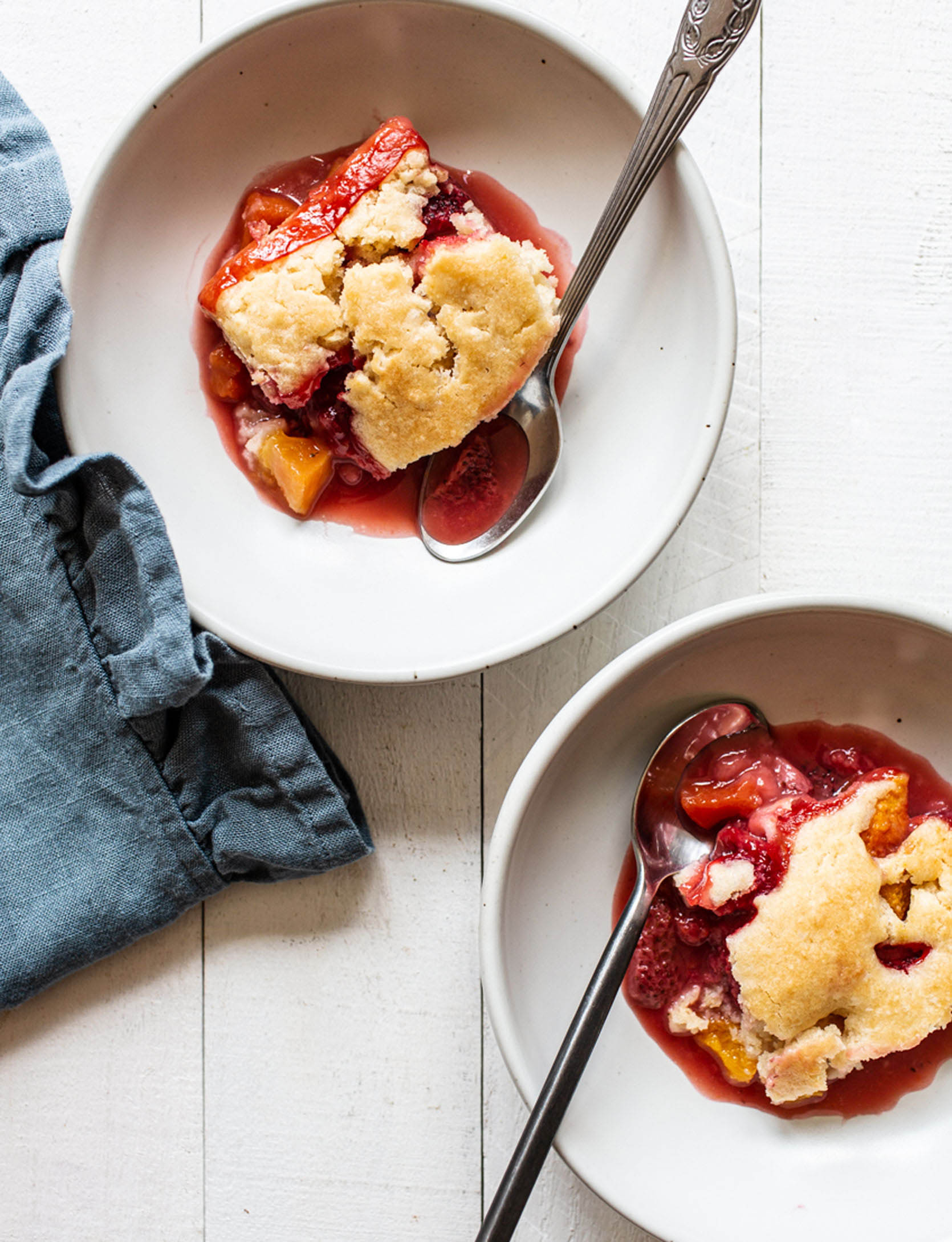 Most of all, the book will give you food. Food that’s colorful, nourishing, and nutritionally balanced, just like the food in Power Plates was. Once again, there will be soups, bowls, and sauces.

But you’ll see that there’s some evolution, as there always is between cookbooks. The recipes in The Vegan Week feel more varied. There’s more of an emphasis on comfort. Some of the main dishes feel more hearty. 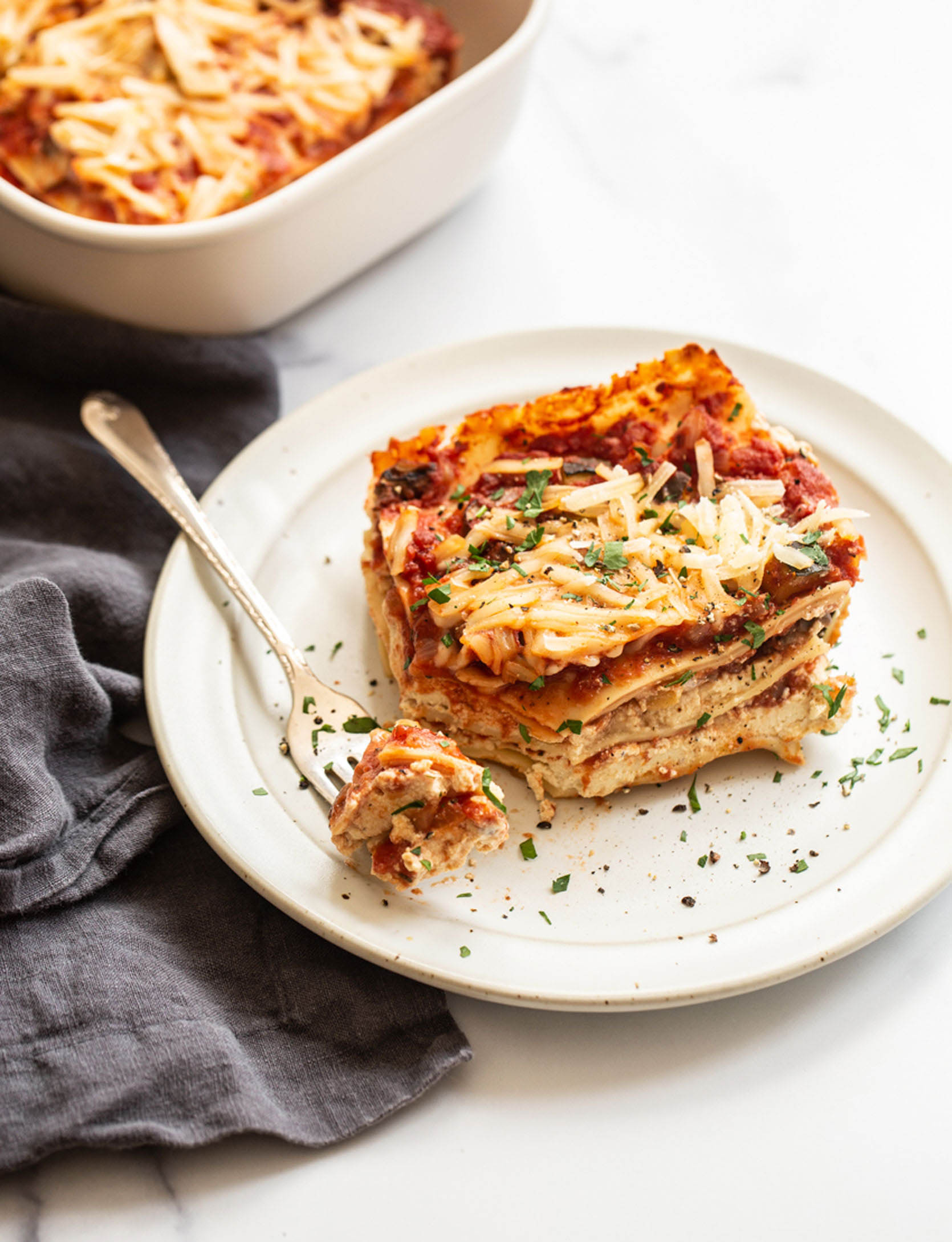 And while the book features a bunch of recipes that are time-intensive—designed to be made over the weekend for maximum weekday leftover enjoyment—it also features more basic, homemade proteins and easy dinners.

My wonderful friend Ashley has once again made the food in the book come to life with her photos. This post includes a sampling of her images for The Vegan Week, which make me excited to cook the food all over again. 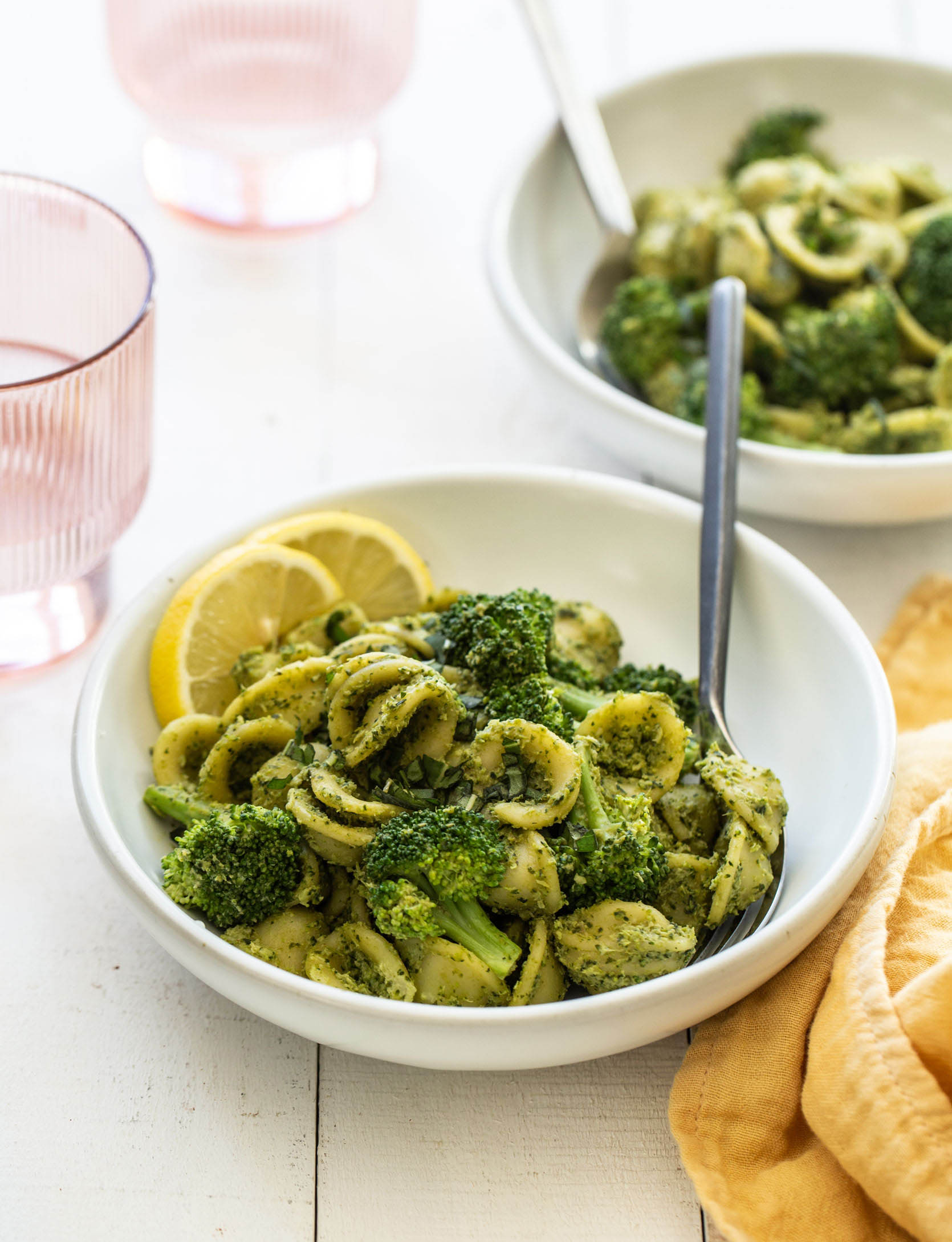 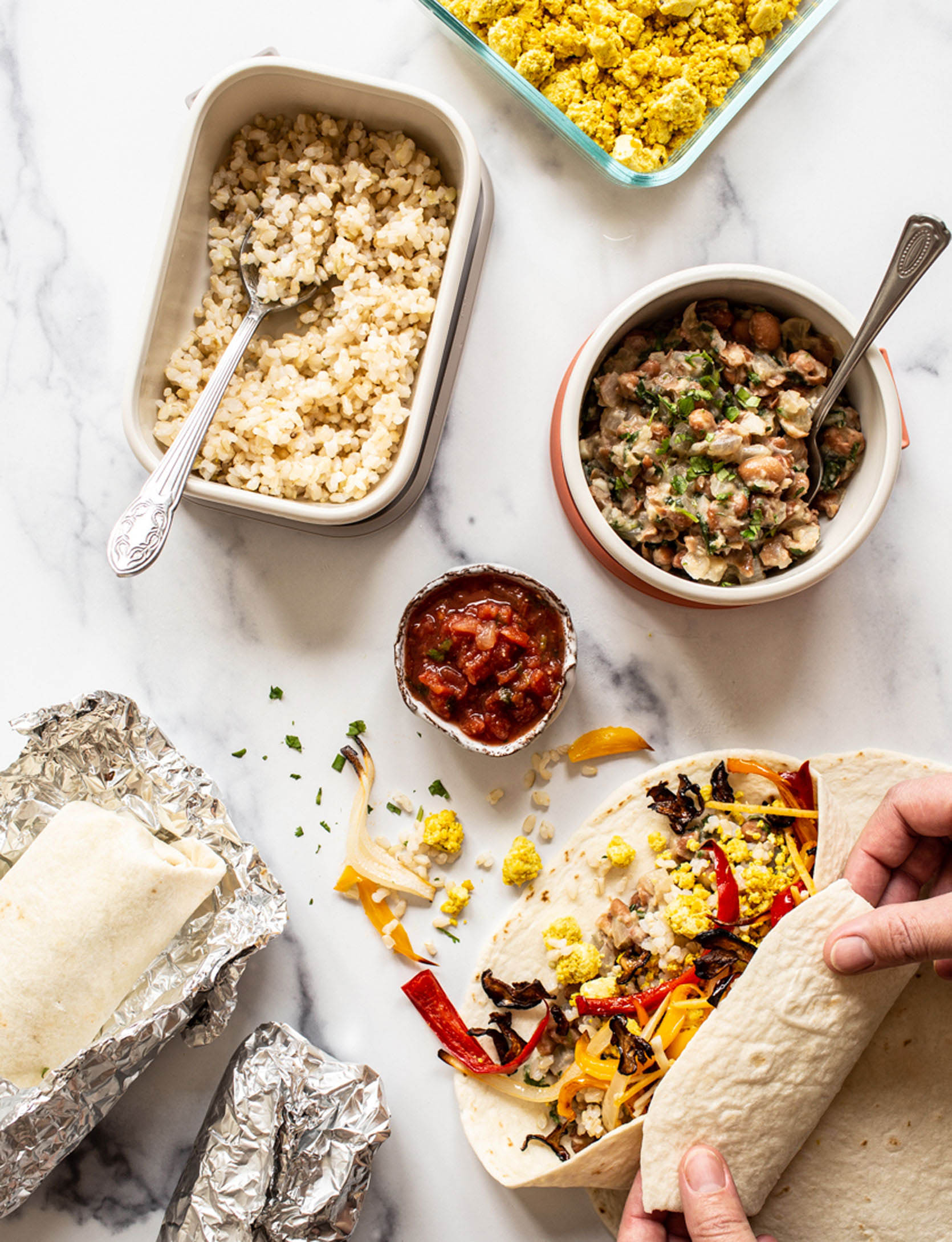 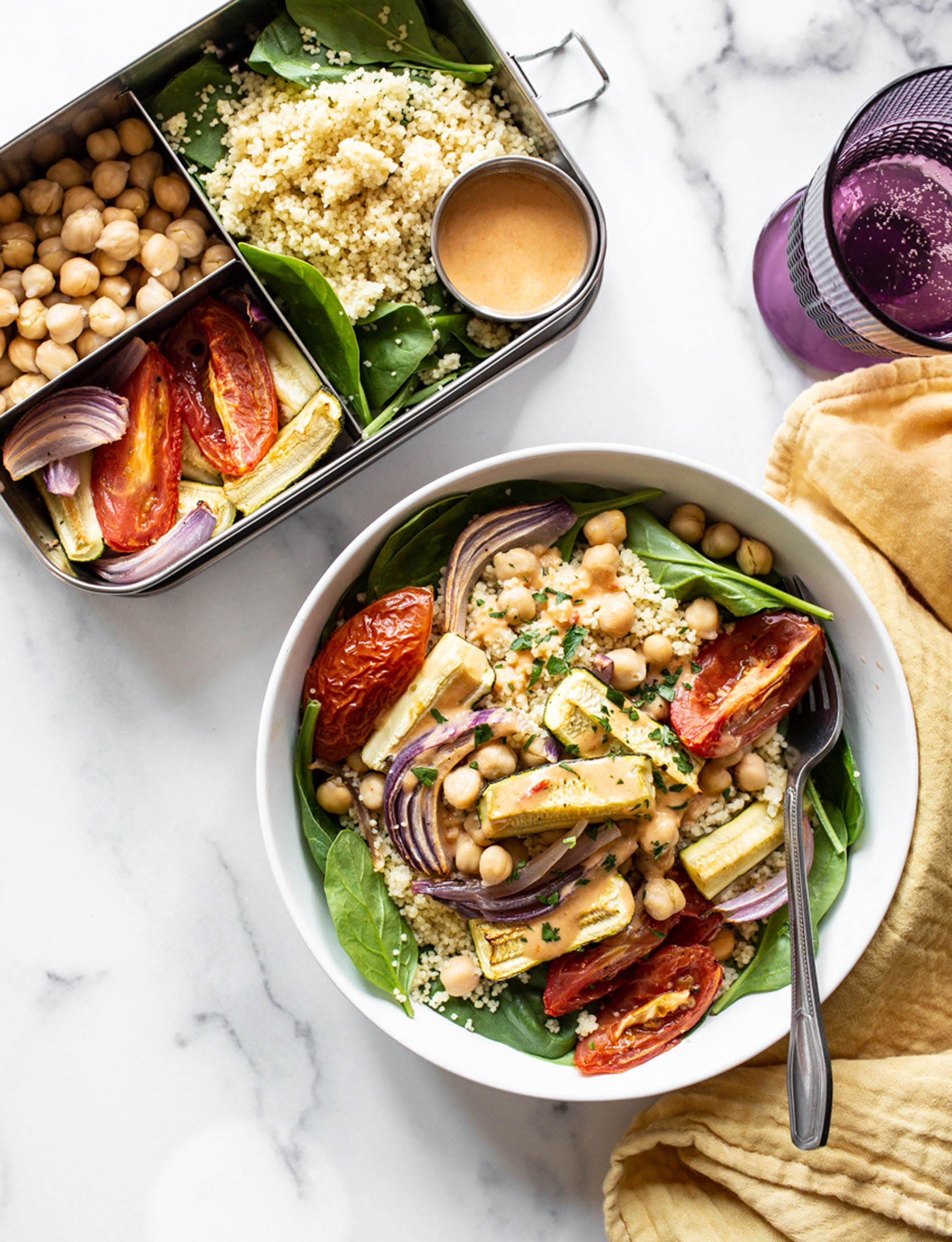 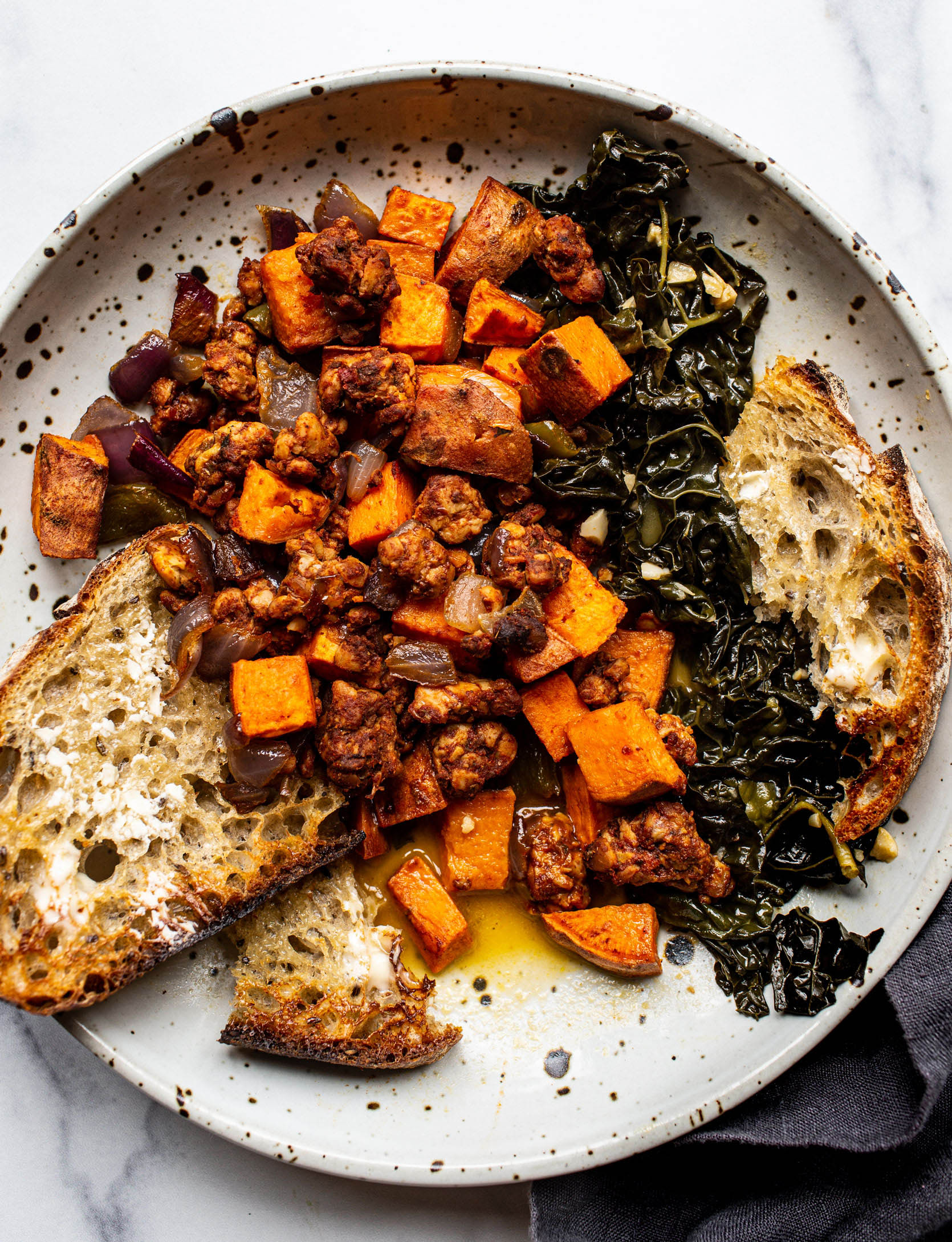 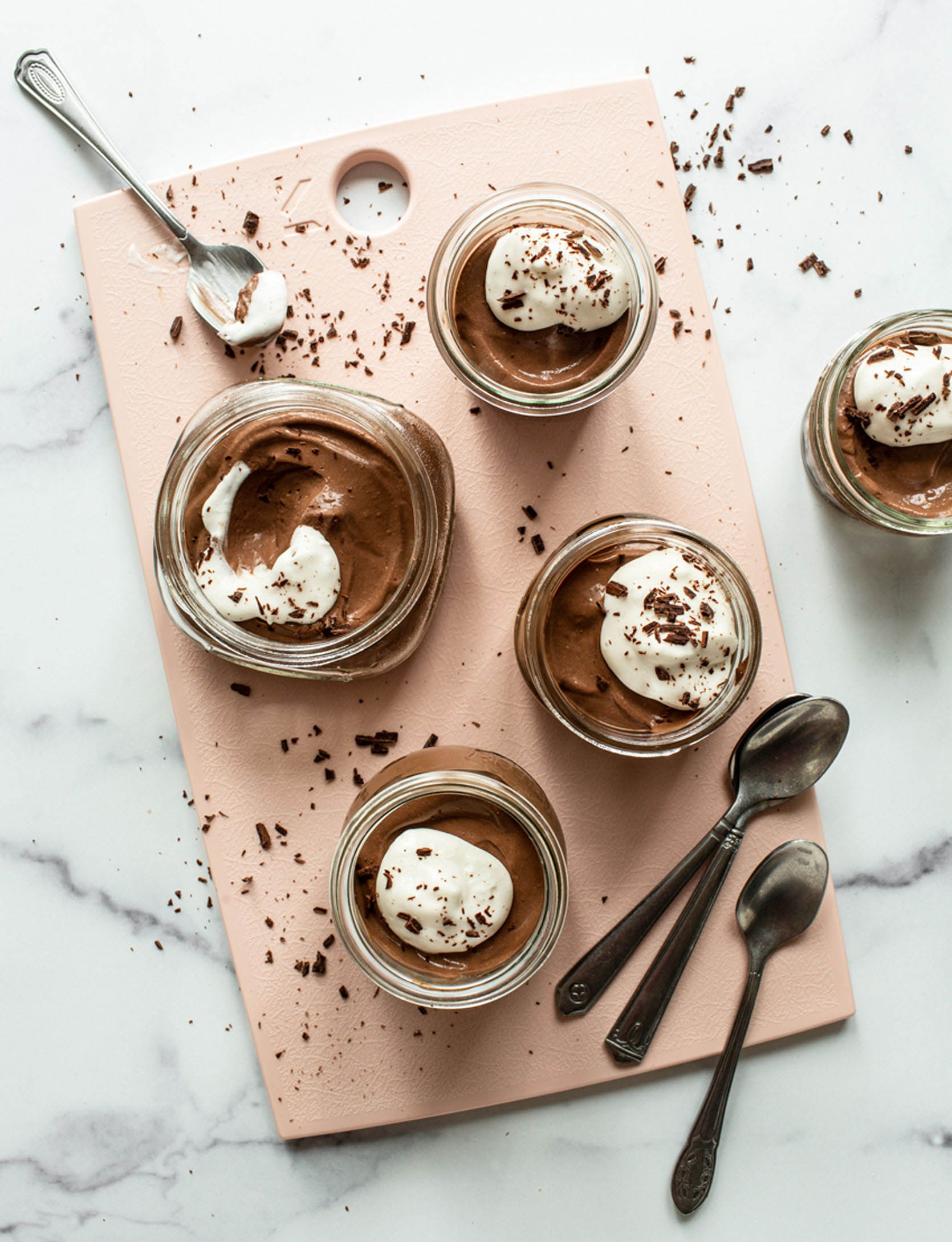 This isn’t a type A meal prep book. It’s not insistent about how much time you spend meal prepping or how often you do it or whether you do it at all. All of the recipes in the book can be meal prepped; none of them have to be.

“I know I should be better about meal prep,” a lot of my nutrition clients say to me.

Better, I promise, has nothing to do with it. Meal prep doesn’t make you more virtuous or admirable. It’s just a means of making one thing in our already complicated lives a little simpler: the question of how to enjoy homemade food regularly when you don’t have the time or will to cook each day.

When I meal prep, even just for an hour, it feels like an act of kindness, a gift that I’m giving my future self. I hope that spirit of giving comes across in The Vegan Week.

I’ll share more about my meal prep routine on the blog in the next few months. I get asked about vegan meal prep all the time, and I want to give you some useful tips, whether you plan to pick up the book or not.

In the meantime, The Vegan Week is available for preorder on the following sites, and it’ll hit bookstores in late December:

Under different circumstances I might say that I hope you’ll enjoy reading the book as much as I enjoyed writing it.

I hope you’ll enjoy the book a whole lot more than I enjoyed writing it.

If there’s any meal you end up cherishing, or habit you end up adopting as your own, you can know in your heart that it was created by someone who had lost her way with cooking and was finding her way back to it, one recipe at a time.

Some of you may have seen a story, which is now making the rounds, about the response that one employee got from her CEO when she let her coworkers know that she was taking a mental health day off. Software developer Madalyn Parker sent out an email to coworkers that read, “Hey team, I’m taking today and tomorrow to focus on my mental health. Hopefully I’ll be back next week refreshed and back to 100 [per cent].” Her CEO took the time to thank…

Have you seen My Octopus Teacher on Netflix? (Some spoilers below if you haven’t yet.) My Octopus Teacher is the story of filmmaker and naturalist Craig Foster, who lives near an underwater kelp forest off the coast of South Africa. Foster is a free diver. On one of his dives he came across an octopus who captivated him with her ingenious methods of outsmarting prey. Foster was so fascinated by the octopus that he committed to visiting her every day for the course…

A little tidbit from yesterday: I got on the phone with a friend at some point during the day. At the end of our call, she asked if I wanted to join her as she walked her dog (she lives close by). I told her no; I had just taken a walk, and I had more work to do. After we hung up, I stared at my apartment and my kitchen counter covered in ingredients. I wanted to work, but I felt resistance…