It’s the first of November, and I’m absolutely astonished at how quickly the fall has been flying by. I tend to feel as though time moves fast most of the time, but lately it’s more apparent to me than usual. I’m doing my best to appreciate the days as they come and go, no matter how quickly. Steven and I took some time to watch a spooky movie and put out candy for trick-or-treaters last night, and no matter how small these gestures were, it was meaningful for us. We’ve both been so busy lately that we’ve felt like ships crossing in our apartment, often seeing each other only in the few minutes before we leave for work/school or go to bed. Observing Halloween was a means of stopping and soaking in this season, before it gives way to winter.

And this morning, I’ve been soaking in some weekend reading recipes and reads. Let’s dive in! 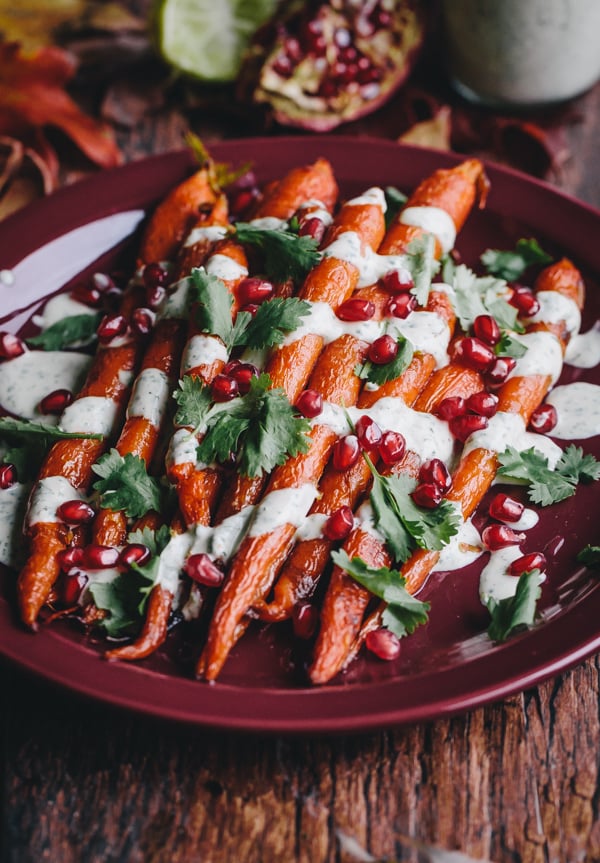 What a gorgeous recipe to start with! These roasted carrots with green tahini sauce and pomegranate from Laura of Blogging Over Thyme are getting me in the holiday spirit already, and I absolutely can’t wait to make them. 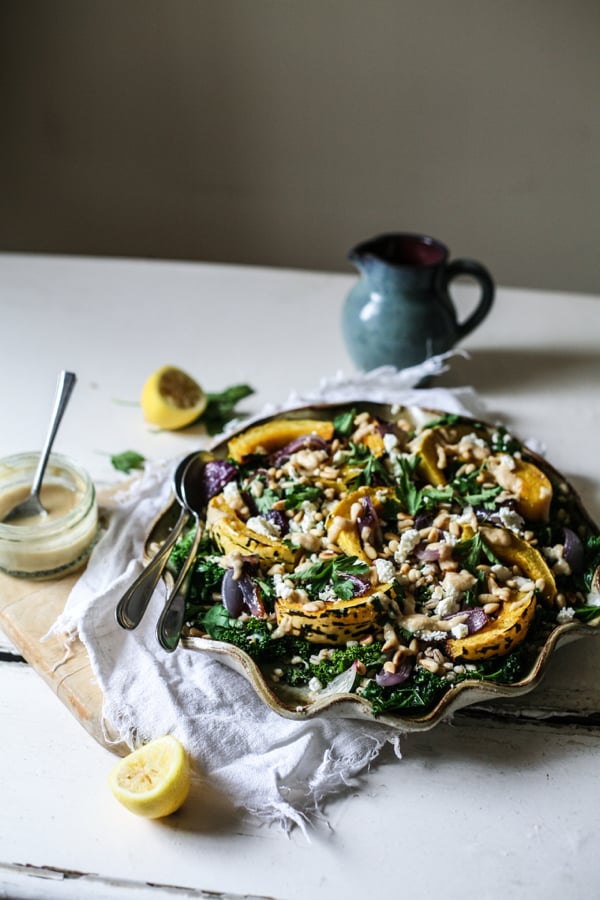 I’m drooling over this squash, kale and barley salad: so much texture, heft, and sustenance on one plate. Substitute some simple cashew cheese for the feta! 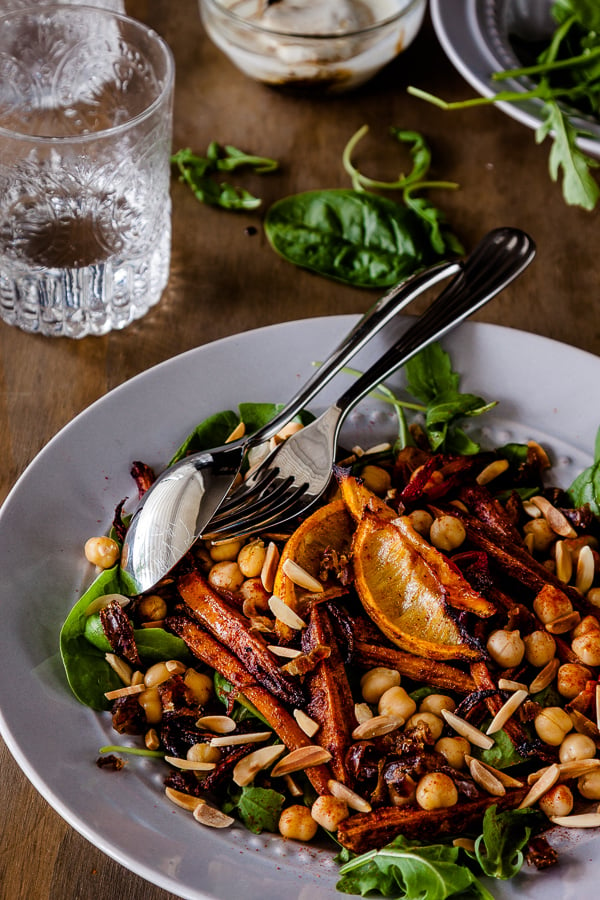 Jennifer of Delicious Everyday always creates the heartiest salads, and this Moroccan carrot salad, which also includes dates, chickpeas, and toasted almonds, is a great example. Her dressing is delicately spiced, too. Substitute vegan yogurt for regular to make it vegan. 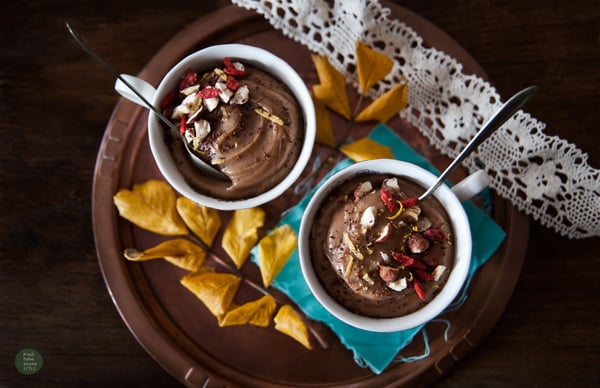 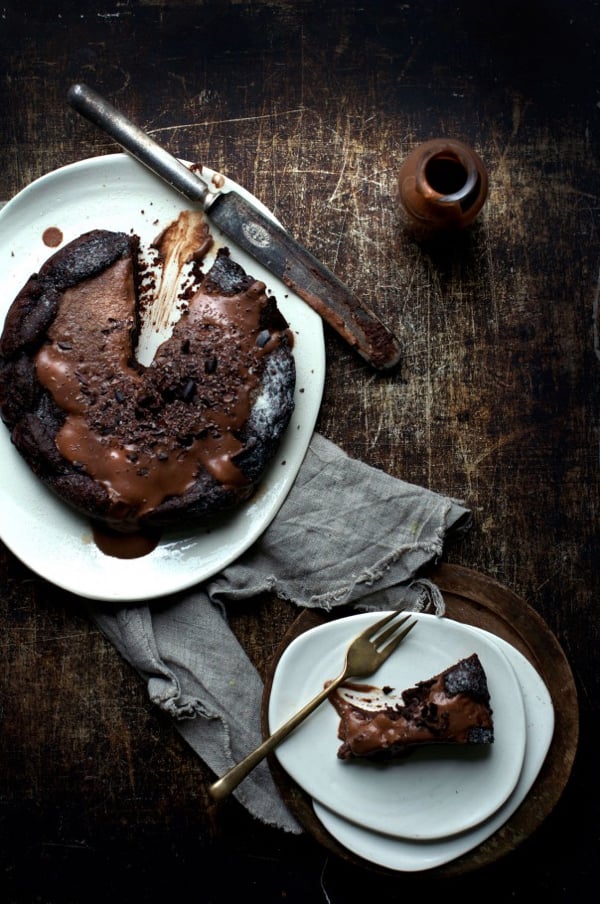 Elenore of EarthSprout always has the most interesting ideas for sweets, and her healthy, gooey black bean chocolate mud cake is just the latest and greatest example! It looks gooey indeed–and very good.

1. Since the WHO’s statement about the carcinogenic potential of meat last week, there’s been a lot of confusion and debate about the language of the statement, as well as a lot of hype and commotion on social media. This can make it confusing for everyday consumers, who simply want to know what the statement means for them and how they should apply it to their own food habits.

Two articles stood out to me this week about the statement: one was Marion Nestle’s comment on Food Politics, and the other standout was my friend Andy Bellati’s smart and hard-hitting article for Civil Eats. Bellati’s in particular is a very good rejoinder to some of the angry backlash we’re seeing against the WHO’s classification.

2. Speaking of meat, and the meat industry by extension, there’s great reporting this week from Deena Shanker in Quartz about how the meat industry has been campaigning to influence the American diet for decades. There’s still a lot of controversy about the choice not to include sustainability in the 2015 Dietary Guidelines, and I’m glad that the decision has evoked so much dialog, but the unfortunate reality is that the meat lobby’s attempt to influence food policy and recommendations is hardly new.

3. Jane Brody’s article, “The Fats You Don’t Need to Fear, and the Carbs That You Do,” has been circulating widely online, and I’ll admit, I was a little hesitant to read it. I thought–presumptuously, maybe–that it might be full of carb/sugar/starch alarmism, a position that’s common these days, and which I often think misses the big picture. When I finally read Brody’s piece, I thought it was actually balanced and well reported–if not necessarily revelatory, since “good fats” (nuts, avocados, etc.) have been getting praise and positive reinforcement for quite a while now. The key point of the article is made by Dr. Frank Hu of the Harvard T. H. Chan School of Public Health: “The mistake made in earlier dietary guidelines was an emphasis on low-fat without emphasizing the quality of carbohydrates, creating the impression that all fats are bad and all carbs are good.”

Yes, the quality and nutrient density of both fat and carbohydrate sources matter. Categorically vilifying one or the other without taking quality/sourcing into account is an oversight. But as much as this is true of fats, I’d say that it’s an even more urgent message for carbs these days, as so many folks have taken to eliminating or restricting them out of fear, when in fact the research continues to associate high quality starch sources (whole grains, legumes, root vegetables) with reduced risk of chronic disease.

4. A very thoroughly reported, troubling article from Oxfam America on the lives–and the exploitation–of laborers in the poultry industry.

5. Finally, news for pediatricians in America: “are you hungry” will now be a question that physicians are directed to ask their children patients in routine checkups. Growing support for such lines of inquiry grows out of increased concern about food insecurity, which impacts an estimated 7.9 million American kids. Children who live in food insecure homes tend to get sick more often, recovery more slowly, and experience more hospitalizations than children who have better food access. Children and teens who are affected by food insecurity are more likely to be iron deficient than other kids, and preadolescent boys who experience chronic hunger tend to have lower bone density. Finally, early childhood (and pre-natal) malnutrition has been linked to a higher risk of developing diabetes and cardiovascular disease later in life.

Because hunger and malnutrition aren’t always apparent to pediatricians in checkups, these questions are a means of ensuring that health care providers don’t miss important clues or fail to recognize food insecurity as a problem. I think it’s an important new line of screening.

Before I go this morning, I want to offer a reminder that the Spright 30-day vegan class is starting tomorrow! For the whole month of November, I’ll be leading a group of awesome folks who are curious about exploring veganism through 30 days of plant-based eating, fueled by fun group discussions, tons of Q&A, recipe sharing, and more. This is a low-stress, safe space in which to give veganism a try, if you’ve been thinking about it. And if you’re already vegan but want to experience a little guidance and have a chance to pick my brain, it’s also perfect for you. The class is 100% free, and signup is easy. Check it out!

Update: The Spright class has officially filled up! If you didn’t make it in this time around, there will be another class next month, and I’d love to have you in it 🙂 Stay tuned on the blog and my Facebook page for details.

And happy, happy Sunday to you.

Happy Sunday, friends, and welcome to another weekend reading–our last pre-holiday edition of the year! I’m excited to share five scrumptious recipe links and five thought-provoking articles, as always. Let’s start with something light and snackable: an unusual baked kale chip recipe from Essential Vegan. Parsnips are among my favorite vegetables, and this rustic parsnip soup recipe is calling my name. I love the idea of a simple, rustic pasta dish with chickpeas and rosemary–so simple and hearty. An absolutely gorgeous herb-y millet…