A couple weeks ago, a reader passed along Carrie Arnold’s insightful article into treatment of chronic, adult anorexia. It’s been a long time since any reading material about EDs has brought up so much emotion for me.

One reason may be that much of what I read about anorexia is focused on teens and young adults. I was eleven when I became anorexic for the first time, which means that the disease and its relapses shaped my adolescence and early adulthood. With each passing year, it all feels farther away, and I suspect that part of this is because I’m growing older as I move further into recovery. I remember self-starvation less vividly, but I also remember being twenty less vividly, and in my case those memories are linked.

This article is different: it describes the ongoing challenges that face adults who have had anorexia for a long time. Habits are all the more difficult to change simply because they’re so established. One physician is quoted saying, “The longer you have anorexia, the more anorexia creates physiological changes in the body and the brain that then create a self-sustaining cycle. You do it today because you did it yesterday, no longer because you decided to go on the Atkins diet when you were 15 or because you broke up with a boyfriend and you decided to lose weight. It’s no longer about that.”

I was already deeply habituated to my ED by the time I truly wanted to get better, and the work of changing habits was enormous. Sometimes I felt as though I was battling myself and every impulse I had from the time I woke up till the time I went to bed. It’s hard to say what recovery would have looked like if it had found me just a few years later, with my compulsions more entrenched. How much longer might the process have taken? Would I have been able to do it? Obviously, there’s no way for me to know.

I identify as fully recovered, but I’ve borrowed a friend’s expression in saying that I work actively to “protect my recovery.” When I say this, I don’t mean that relapse feels proximate; it really doesn’t. If nothing else, I don’t think I could ever again muster up the energy that anorexia demands. It’s so exhausting. And I’m pretty certain that I couldn’t do without food at this point. Even if I wanted to, even if I tried. I always loved it, even when I was sick, but I love it now in a way that feels completely fundamental to my identity and experience of life.

But could I imagine being tempted, during a bad spell of anxiety or isolation, to seek out comfort in regimented behaviors or ancient compulsions? Do habit and routine always exert a hold on me when I’m adrift? Do I sometimes wish I had the energy to deny myself food again, because without my ED I’ve lost the reward that I used to access whenever life felt overwhelming?

That’s probably why the article hit home. It affirmed what I already believe, which is that a full recovery is possible, and the tendencies that fueled anorexia in the first place will probably never dissapear. We can, with great support, self-care, mindfulness, therapy, and/or medicine, learn to quiet them, manage them, and live lives in which they no longer hold us hostage.

As the article makes clear, there’s also also a growing body of evidence to substantiate neurobiological contributors to the disease. It may be that those who develop anorexia have unusually high levels of serotonin, which can enhance anxiety and irritability; serotonin is synthesized from tryptophan, an amino acid that we all obtain from food. The less you eat, the less tryptophan you consume, and this may have the effect of lowering serotonin. It’s one of many possible reasons why anorexics tend to feel better when they’re hungry, rather than worse.

As I was reading, I remembered how many years it took me to be at peace with the sensation of fullness; this also meant letting go of my attachment to the power and energy I felt when I was empty. It was one of the slowest pieces of recovery. Nowadays fullness makes me feel grounded and calm, while hunger tends to make me a little anxious. I’m not sure when the switch happened, but it was such a relief when it finally did.

The article is hopeful in that it highlights a new treatment option that places focus on neurobiology, compulsion, and family therapy all at once. It’s called Neurobiologically Enhanced with Family/Friends Eating Disorder Trait Response (NEW FED-TR), and its goal is not only to treat, but also to help those with EDs to release guilt and shame surrounding the disease(s).

One of the most poignant moments of reading, for me, was a description of a treatment provider playing an audio recording of what a former patient reported as the thoughts that hounded her while she was trying to eat: “I can’t eat this. I’m going to get fat. I’m ugly. I’m disgusting. I’m weak. I hate myself. I can’t do this. I’m so pathetic, just pathetic, a weak pig.”

I thought back to my own internal monologue once upon a time, both during anorexia and during recovery. I don’t remember all of it, but I remember how often words like “pathetic” or “disgusting” or “filthy” came up.

The author notes that most parents had begun treatment with anger toward their children for seemingly refusing to eat. “When they heard the recording and the sheer amount of ‘noise’ that their children endured,” she writes, “their anger dissipated.” I suspect that, if more people could hear the relentless, intrusive thoughts that plague an anorexic as he or she is trying to eat or make a decision about food, empathy and understanding would be so much deeper and more widespread.

As I said, it’s been a long time since anything hit so close to home or evoked so much feeling and memory. I’m grateful to Carrie Arnold for writing this piece, and to all of the individuals whose brave recovery efforts are highlighted.

I’m grateful, too, for a belly full from breakfast this morning, and the peace I feel with that sensation. 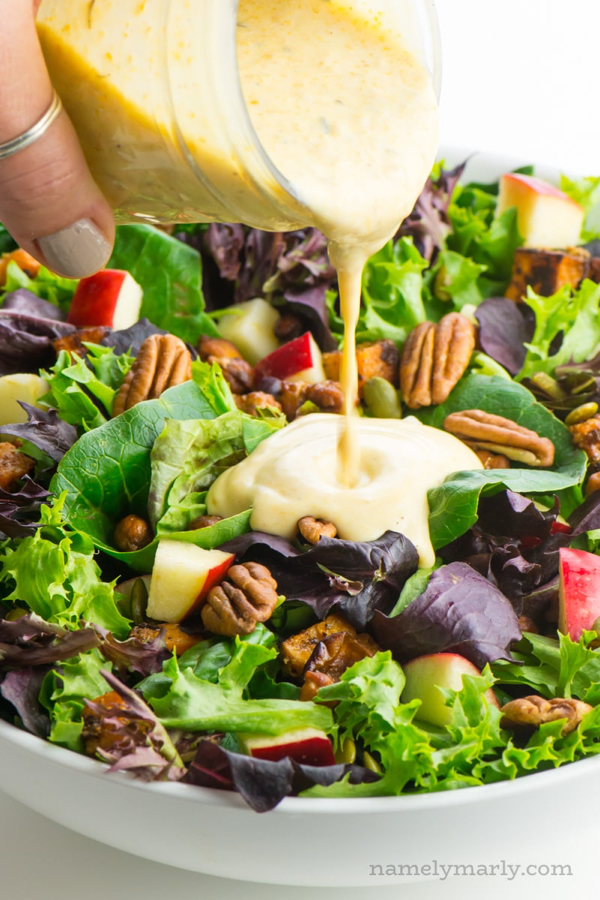 I like all of the things in Marly’s crisp, savory sweet, seasonal vegan harvest salad, including roasted chickpeas and sweet potatoes. But I’m especially excited about her creamy pumpkin ranch dressing! 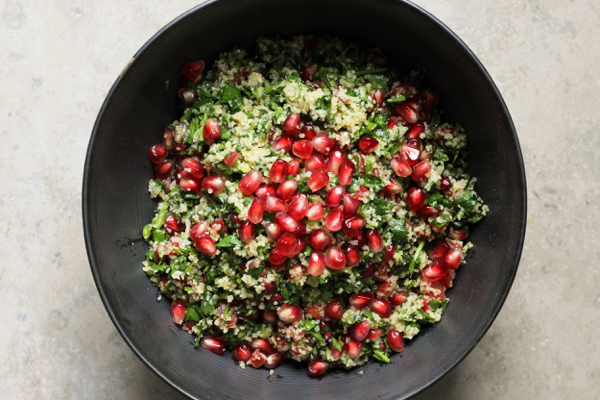 If you happen to be doing a Middle Eastern inspired feast for Thanksgiving (or the idea intrigues you), this would be an awesome side: pomegranate cilantro tabbouleh. I’ve experimented with lots of different grains in tabbouleh salads, but never cilantro in place of or with the parsley. Really intrigued to try it. 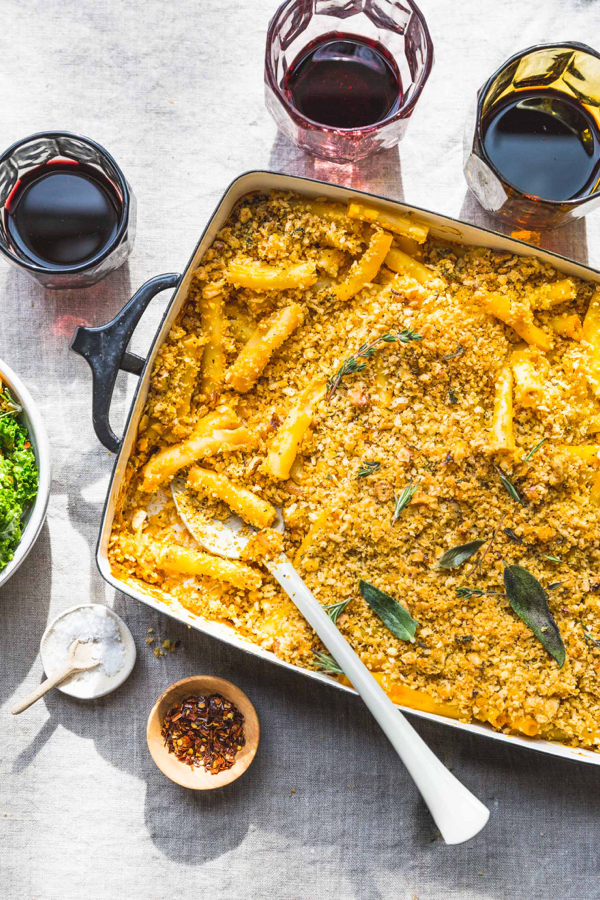 This week Shelly posted the pumpkin baked ziti from Veganomicon (which just got a snazzy new, 10th anniversary reissue). I have the new edition, and I’m being reminded of how awesome this recipe is. It’ll be my next major comfort food fix for sure. 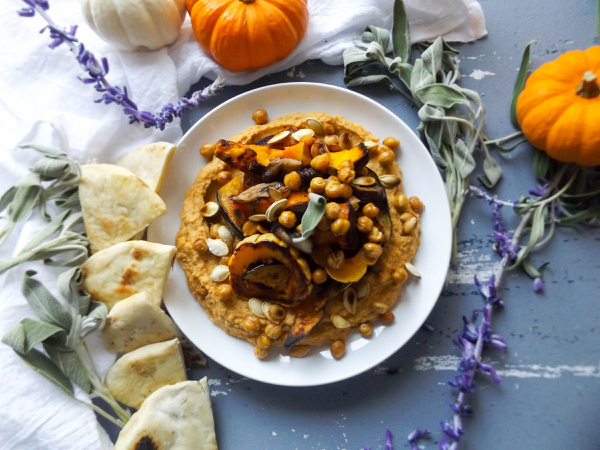 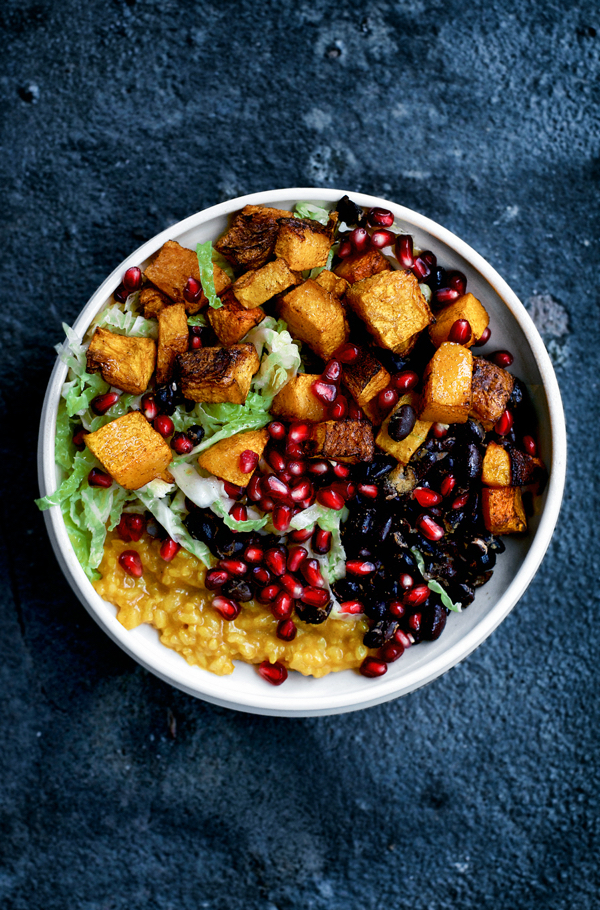 A perfect, nourishing bowl of autumn vegan goodness from Alexandra, who was kind enough to adapt my turmeric rice for the recipe. I so appreciate her sharing her truth about her experience with depression in the post, too.

2. A mother’s thoughtful consideration of the fact that her daughter won’t be able to remember much of her early childhood years as she gets older.

3. An interesting article about training our minds to be more open-minded. There are reasons why it’s so difficult for most of us to accommodate world views or ideas that are foreign to us. According to the article, open-mindedness can be cultivated like other skills, with mindfulness and mental exercise.

4. An important read on why girls shouldn’t be forced to dispense hugs or any other type of touch, even to family members, during the holidays. This one definitely hit home: I grew up in a Greek American culture in which hugging and cheek pinching were commonplace. I remember how uncomfortable having my cheeks pinched used to make me, and I wish I’d been given permission to have firmer physical boundaries at that age.

5. Saline—a most basic medical supply—is running short since manufacturing facilities were damaged by Hurricane Maria. A reminder of how greatly we depend on certain medical staples and how quickly they can become precarious.

I’ll be checking in throughout the coming week with some new recipes, but I want to take a moment to wish anyone and everyone who’ll be traveling or busy for the holiday a wonderful Thanksgiving. Peace to you all, and see you soon.

First, a heartfelt thank you for the kind, supportive words about Power Plates this week. I’m so grateful for them, and to those of you who have been cooking and sharing on Instagram, I can’t tell you how much joy it gives me to see the recipes take life in other peoples’ kitchens. It’s been interesting to observe the feelings that have come up since the book came out. I felt a little jittery before the release, which is probably normal, but the…

Hi all. Hope you’ve had nice weekends so far. I’m sorry to be posting these links so late, but I hope they might give you some good reading material as you charge into the work week! These elegant apples with roasted beet tartare, cashew cheese, and candied walnuts from Ketty of the Luminous Vegans have my name written all over them. So pretty. Ella’s marinated brussels sprout skewers with ginger barley pilaf look perfectly seasonal and simple. Speaking of seasonal, looking for a…