This week has flown by, as weeks before or after big holidays tend to, at least for me. I was pretty sick the week before Thanksgiving last year–an unwelcome visit from acute gastroenteritis–so I never had a chance to really plan or enjoy a vegan menu for sharing. I barely managed to get my vegan sweet potato and lentil shepherd’s pie ready for dinner at Steven’s grandmothers’ place.

I’m feeling well this year, which means that I can indulge my usual excitement about sharing at the holiday table. I’m planning on the millet and black lentil stuffed squash I shared last week, vegan apple pie, and a few other odds and ends. In spite of the fact that a pumpkin dessert wasn’t requested, pumpkin pie is my favorite, so I made it yesterday and enjoyed it as an early Thanksgiving offering to myself, using my favorite recipe.

It’s funny how holidays and the traditions that surround them change and shift over time. When I was a kid, Thanksgiving was all excitement and celebration and reveling in other peoples’ cooking. When I first became vegan, it was a pleasant challenge, an opportunity to make plant-based the recipes I knew and loved from holidays past. One of my favorite Thanksgivings in memory involves veganizing a whole Thanksgiving meal and serving it to my mom–just the two of us, cozy and quiet, eating together in my tiny apartment. (I’m not sure how I managed to cook so much in that postage stamp-sized kitchen, but I did.)

During my post-bacc, Thanksgiving became a reprieve, an opportunity to come home and regroup after the first push of the semester. I don’t really remember the food during those years, but I do remember how good it felt to flop onto my mom’s couch, call my friends, enjoy New York for a few days before returning to chemistry and biology.

Recently, Thanksgiving has felt by turns like a break or an interruption, which is probably how it feels to many of us as we get older and life becomes busier and more complicated. This an odd one for me because the past year has been so craggy, and I’m feeling changed by it. Whether or not those changes are visible to others I’m not sure, but I do feel as though I’m showing up differently for many things, holidays included. I’m allowing myself to understand that rituals and traditions change along with us, expanding to accommodate our growth.

As I reminisce on Thanksgivings past, it’s impossible for me not to quietly remember how many of my shared meals were tainted by the experience of my eating disorder. As anyone who has struggled with food knows, gathering around the table can be complicated business: it’s meant to be a form of communion and sharing, but instead it can feel profoundly isolating.

This week, I wrote an article for Food52 on sharing a table with someone who has an eating disorder. It includes some tips on how to plan and strategize so that everyone can feel a little safer and closer. It also addresses small ways that we can bring more empathy to the way we approach EDs, both within and outside of the family home. Respect and kindness are powerful tools in managing a difficult and frustrating illness. If you or anyone you know is feeling anxious about gathering for the holiday season, or in general, perhaps the article will be of help.

Onto this week’s links, which feature some of my favorite holiday picks from the blogosphere. I’d be very thrilled to enjoy a Thanksgiving meal with any or all of these vegan dishes! 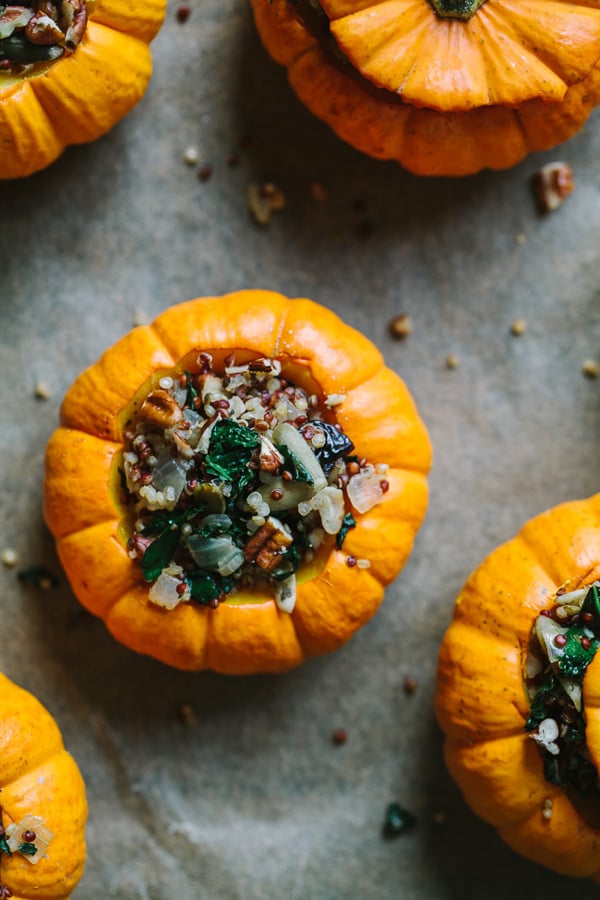 Emily and I are on the same wavelength this week, both feeling excited about the possibilities of stuffed holiday squash. I’m loving her adorable stuffed mini pumpkins, which feature a quinoa, kale, and pecan filling. What a beautiful contribution to any festive meal! 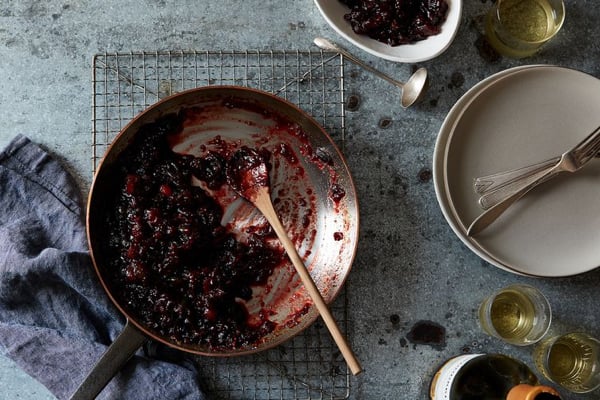 Cranberry sauce is well and good, but I’d always prefer a vibrantly spiced, sweet-and-savory cranberry chutney. This recipe from Food52, which is seasoned with ginger and mustard seeds, is calling my name. 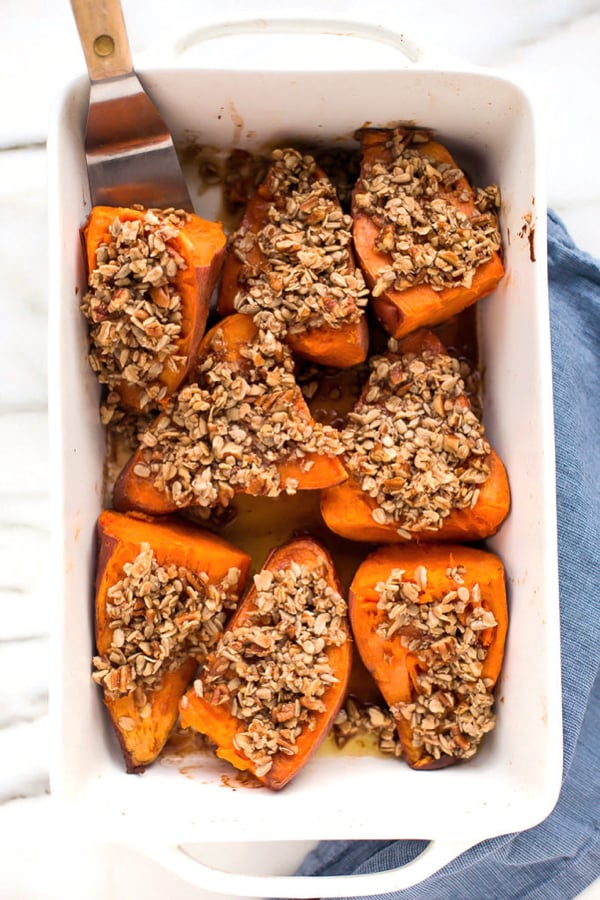 I’m all about simple and stress-free holiday food this year, and Ashley’s baked sweet potatoes with sunflower pecan crumble are a wonderfully streamlined and no-fuss alternative to traditional sweet potato casserole. 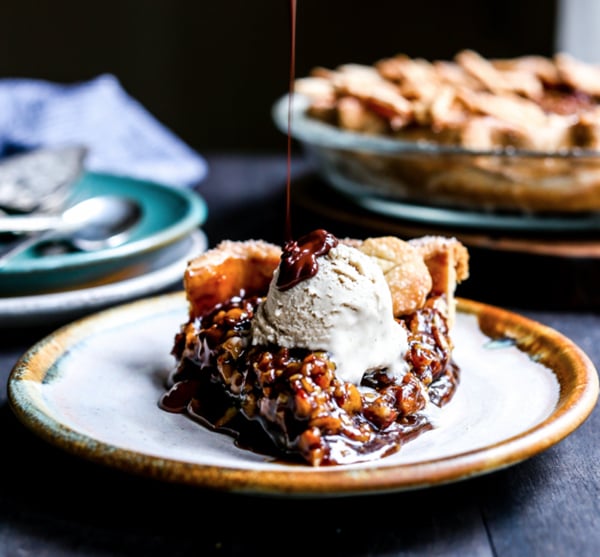 For dessert, I’m all over Traci’s vegan bourbon pecan pie, which is gorgeously decorated and oh-so-decadent. And let’s not forget the vanilla ice cream and chocolate topping. 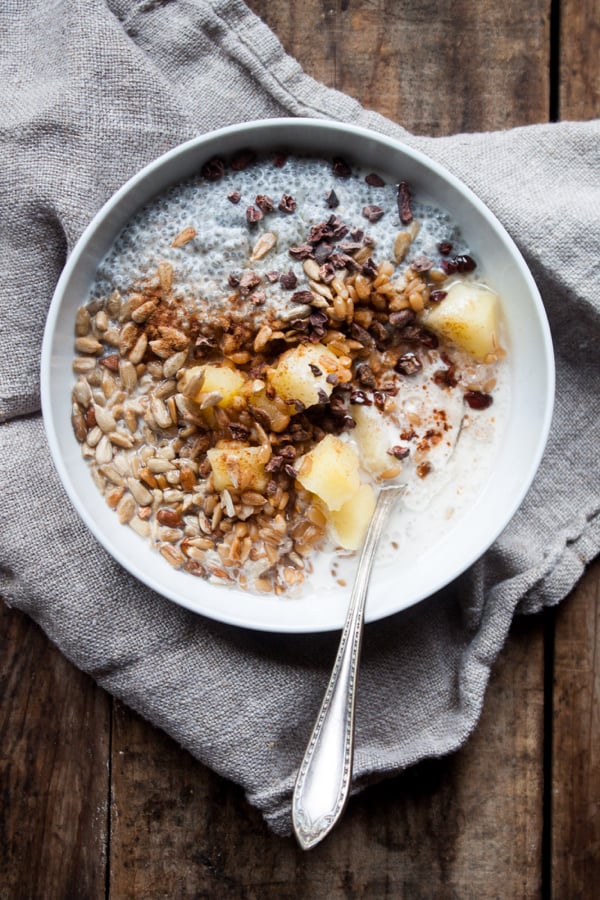 After a long week of cooking, gathering, traveling, and so on, it can be a real joy to sit down to a simple and wholesome breakfast. Shira’s beautiful winter farro breakfast bowl is on my list of breakfasts to enjoy next weekend, as I wind down and catch up on things.

1. A friend of mine shared this article from The Globe and Mail with me some time ago, and after I read it I struggled to untangle what I felt about it. The article is about “food broadcasts,” which are known as mukbangs in South Korea, where the trend seems to originate from. The videos show their makers devouring big helpings of food, and they’re often incredibly popular.

What’s interesting about the article is that it delves into so many of the psychological ramifications of creating and also experiencing these videos. Some have suggested that they’re part of an adjustment to a culture in which more and more of us are eating solo; in South Korea, the article notes, eating alone is still somewhat stigmatized. For one broadcaster, the videos have been part of anorexia recovery. For others, it can be a form of vicarious enjoyment and pleasure.

Having read the article a few times, I’m still not sure what I think: on the one hand, it’s difficult for me to criticize any medium that gives people inspiration, freedom, or a sense of self-expression surrounding food. On the other, I can understand the concerns that some ED treatment providers express in the article, and at least one broadcaster reports cycles of behavior that sound reminiscent of BED. I appreciate that the article touches on all of this complexity.

2. I’ve spent a lot of time studying childhood and young adult feeding through school in the last year, and I was pleased to read this article on kids going vegan or vegetarian. Unlike many articles on vegan diets for kids, it features the perspective of health care professionals who have thorough understanding of vegan diets and can offer a balanced perspective. It’s great reading for any parent who is nervous or confused about supporting kids through the transition to a plant-based diet.

3. I mentioned the opioid epidemic in a recent weekend reading post, that time in the context of a greater push for primary care physicians to recognize and screen for addiction. This article examines our country’s climbing rates of opioid addition from the perspective of emergency room care. Helen Ouyang, an emergency physician, describes the difficulties of responsibly managing possible opioid addiction while also offering her patients the painkillers they very often need.

4. When I was volunteering in pediatrics during my post-bacc, I was touched to learn that touch therapy could help infants in the NICU to grow faster and become stronger. Since then, especially in my own work, I’ve tried to be sensitive and attuned to the power of touch as a conduit of healing.

So, I appreciated this article, which details one mother’s evolving understanding of touch and its importance in her life. I like that the essay addresses touch in many contexts: between parents and kids, between strangers, between lovers.

5. Finally, a fun article about a “sisterhood of supper” that emerged when journalist Jane Cunningham Croly was told in 1868 that women were banned from an upscale dinner at the famous New York City restaurant Delmonico’s. Croly went on to establish the first independent women’s club in the United States. It’s name was Sorosis, derived from a botanical class of plants which bloom into fruits on one body, like a pineapple.

The group’s triumph came one year later, in 1869, when they were able to gather at Delmonico’s for their own, all-female womens’ club meeting. At the time it was considered improper for women to eat without male escorts in public, which made the meal somewhat groundbreaking, especially at such a reputable establishment. It’s a colorful story of solidarity, activism, and the power of collective effort.

With that, I wish you a great close to the weekend! I’ll be back tomorrow with a very easy and flavorful holiday side dish — the kind of recipe you can whip up at the last minute if you need a green veggie to round out your meal. It’s a new favorite for me, and I hope you’ll like it, too.