Happy weekend, friends. I hope that you’re enjoying some restful time. After a week of totally unseasonal mid-70s weather here in NYC, it’s finally cooling off today, and it feels like fall again. I’ve set this aside as being a quiet weekend, as I have my next round of exams starting on Tuesday. I haven’t had quite as much time to prepare as I did for the first batch of mid-terms, so I’m a bit anxious about getting down to work, but hopefully I can work through the material efficiently today and tomorrow.

And for now, I want to share the seasonal recipes and the news that caught my attention this past week! 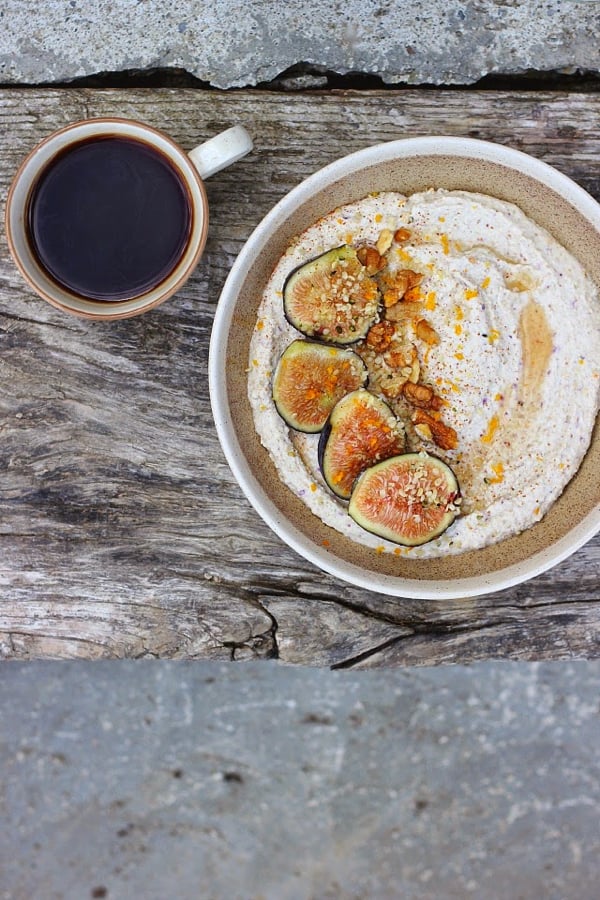 I’ve enjoyed a number of raw porridge recipes in the past, most of which are made with a combination of buckwheat and nuts/seeds. Few are as simple or as enticing as Jodi’s beautiful raw nut + seed porridge with fresh figs from Happy Hearted Kitchen. I wish I could dig into a bowl right now! 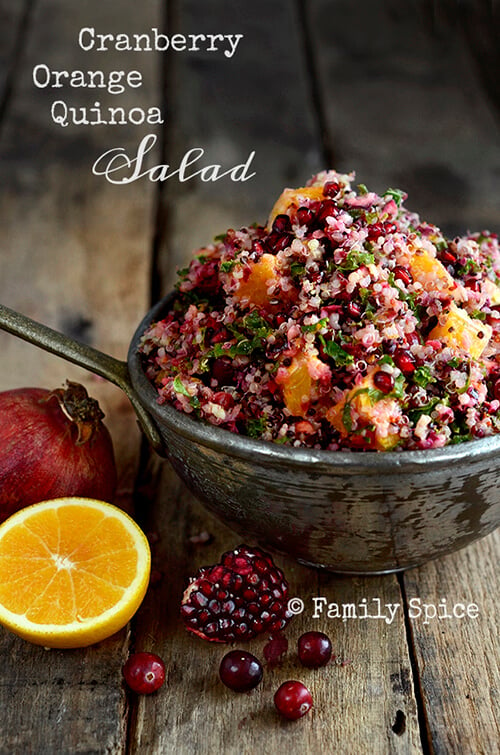 Thanksgiving menu planning is most definitely on my mind, and this cranberry orange quinoa salad from Family Spice looks like a perfect side dish. It’s easy to prepare, flavorful, and healthy. (Substitute agave or maple syrup for the honey to make it vegan!) 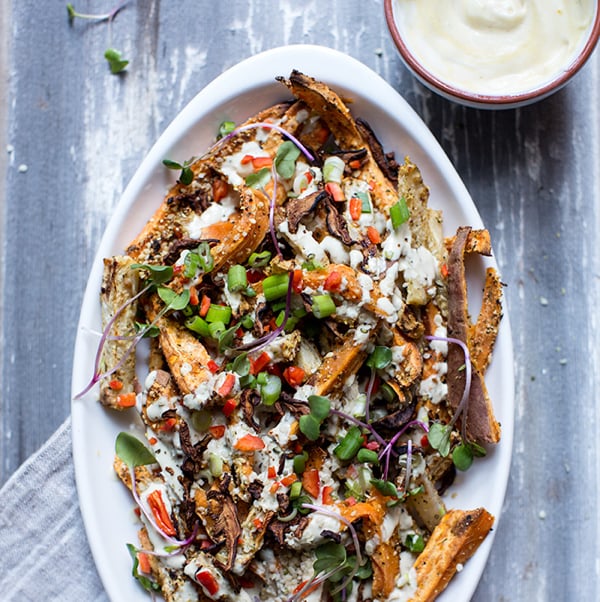 While we’re on the topic of holiday meal ideas, I’m just lusting after this colorful, fully loaded serving tray of goodness: sweet potato and root vegetable fries with shiitake bacon and garlic tahini from Jodi of What’s Cooking Good Looking. So much flavor and texture and so many of my favorite things on one plate! This would be a crowd pleasure for sure. 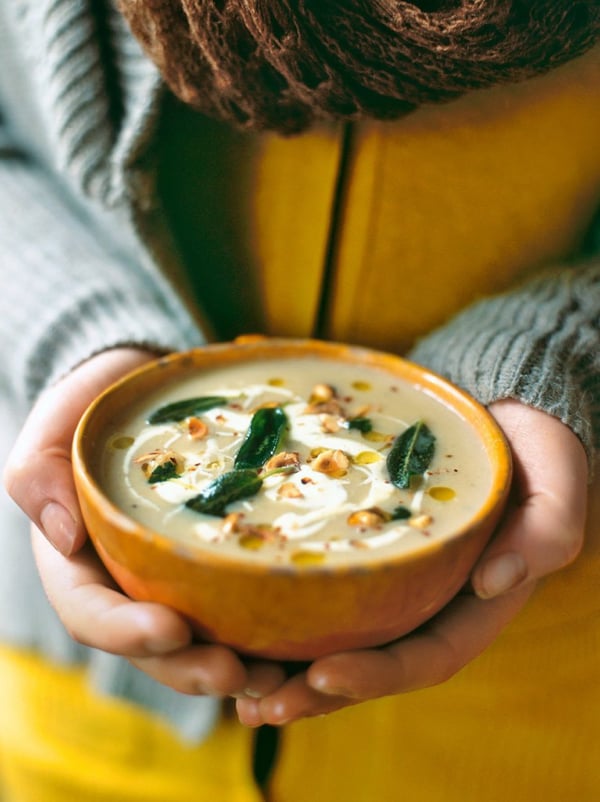 I love celeriac–it’s hard not to find joy in cutting away that knobby exterior and finding the tender root vegetable flesh inside!–but its flavor can be a little overpowering unless it’s paired with other ingredients. I love the idea of marrying it with apple, and I imagine the sweetness of the fruit would help to balance and mellow the bold tastes of celery and parsley. This celeriac and apple soup from Jamie Oliver looks like a perfect bowl for winter, and I look forward to trying it with cashew cream in place of the craime fraiche. 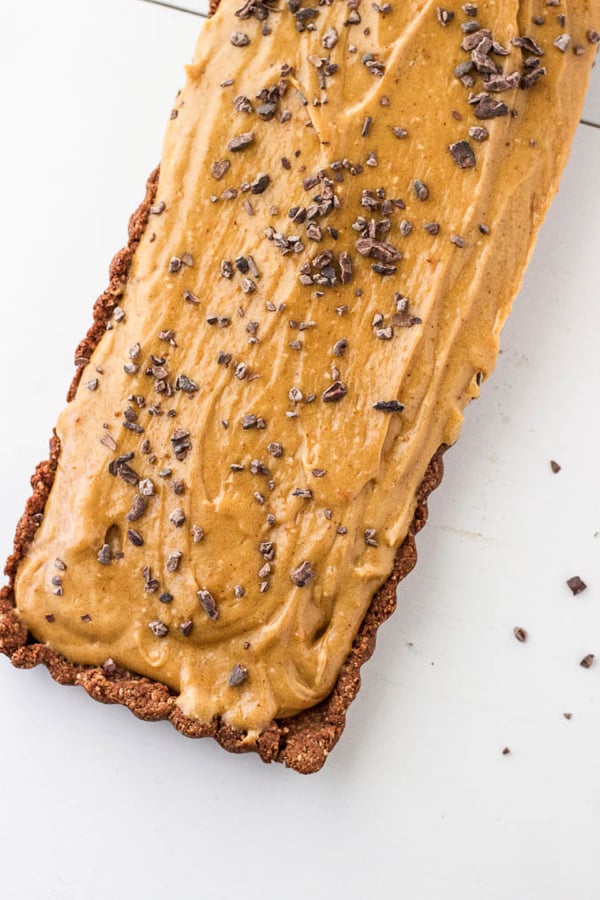 Finally, dessert. This peanut butter tart with chocolate crust from Tessa of Salted Plains has it all: saltiness, sweetness, creamy decadence, and (of course) chocolate. Tessa has such a knack for crafting desserts that people will love to eat, and this is no exception.

1. First on the reading list, an animal rights op-ed that I missed when it was originally published in The New York Times in August. The authors, James McWilliams and Bob Fischer, are tackling the issue of strategic activism for vegans. Specifically, they address frictions between so-called “abolitionism” and welfare. The former position insists that fighting for welfare reforms for animals (for instance, getting rid of gestation crates) is ultimately counterproductive to the ultimate goal of animal liberation, because it implies that a fundamentally unjust system can be improved upon; isn’t it better to place all of our activist energy on dismantling the system itself? The welfare perspective doesn’t necessarily contest that the system needs to go, but its main point is that any improvement we secure for animals is still a step in the right direction.

As I said, this debate is not new, but I like the way that McWilliams and Fischer sensitively address it. I’ve never felt that the ultimate dream of liberation is necessarily at odds with the gradual process of welfare reform, and to some extent I believe that reforms create an important public dialog about the dignity and selfhood of animals. It’s a rich, interesting topic, and I’d love to hear your thoughts.

3. Interesting reporting on medical overhype and its seepage into health journalism from Vox. A new study in JAMA Oncology studies the use of superlatives in press coverage of cancer drugs. In about 50% of cases, terms like “breakthrough,” “miracle,” and “cure” were used to describe medicines that hadn’t even been approved yet by regulators. More disturbing still, about 14 percent of the time these terms were used, the drugs actually had no human data (which is to say, they were all studied with animals or in vitro) behind them.

4. A fascinating article about the origins of biodiversity in the Amazon–biodiversity that is, sadly, ever more under threat.

5. In doing some research for a paper for my Nutrition & Human Development course this semester, I stumbled across this blog post, written by a therapist who specializes in the destigmatization of weight and the championing of body diversity among children and teens. It’s called “9 Common Mistakes that Parents Make About Their Kids’ Weight,” and it includes some helpful strategies. They include speaking about exercise in the context of joyful movement, rather than as a means of achieving weight loss; not referring to foods as “good” or “bad” around kids; eschewing body bashing or shaming in front of children; and avoiding any mention of being on a diet or dieting when kids are in the room.

The content of the post aligns strongly with much of the content we’ve been learning in my class. One of our assigned books is Child of Mine by Ellyn Satter, which is ostensibly about feeding babies and toddlers, but is also a powerful call for parents to avoid stigmatizing foods as being “bad” and problematizing their children’s’ weight and/or appetite. Satter demonstrates that children who are taught to feel ashamed of their weight or food preferences are predisposed to have troubled relationships with food later in life, including disordered eating and challenges with healthy weight maintenance. I don’t love Satter’s stance on plant-based diets for kids, and at times, I think she’s almost too zealous in her refusal to emphasize healthfulness around kids. Notably, she started writing the book in 1979, and I’d argue that today’s food culture is more obesogenic than was the one in which Satter first published this work; it may be more crucial that parents nowadays have an honest dialog with kids about healthy habits than it was back then.

Still, Satter makes a lot of powerful points about the celebration of healthful appetite around children, and she makes a good case for not policing young children’s weight, both for the sake of their longterm peace with food and so that they can develop positive body image. Her perspective was very much on my mind as I read these nine mistakes (and proposed solutions) from Judith Matz. Matz is the author of a book called Amanda’s Big Dream, which tells the story of a girl who loves to skate and dreams of a solo in the Spring Ice Show. When her coach makes a comment about her weight, Amanda loses her confidence and quits. The book seems to be a powerful statement about how kids are taught at a very early age to internalize our societal fixation on thinness–which is not the same as a cultural conversation about overall good health.

It’s all interesting stuff, and I do think that Matz’s tips are helpful for parents, care-givers, and anyone who spends time around growing children to remember. I even think they’re helpful for those of us who don’t have or spend a great deal of time around kids; body-bashing and shaming is a cultural pattern that won’t change until we all take a stance against it.

On that note, I wish you all a wonderful and happy Saturday!

Happy Sunday, everyone. In spite of the fact that New York City’s first day of spring was marked by snow, the warm afternoon sunlight today is making me feel as though the seasons really are changing. I’m enjoying a quiet day of work at home, and I’ve been taking occasional breaks to catch up on reading and recipes. Here’s what has caught my eye. To begin, a lovely asparagus and pea soup from Farm on Plate. Asparagus and peas are so elegant, and…