A year or so ago, I started noticing small prints affixed to street lamps around the city. They featured different depictions of a woman with a bob haircut, usually clad in clothes reminiscent of 60s mod styles.

The woman was always accompanied by some sort of message. 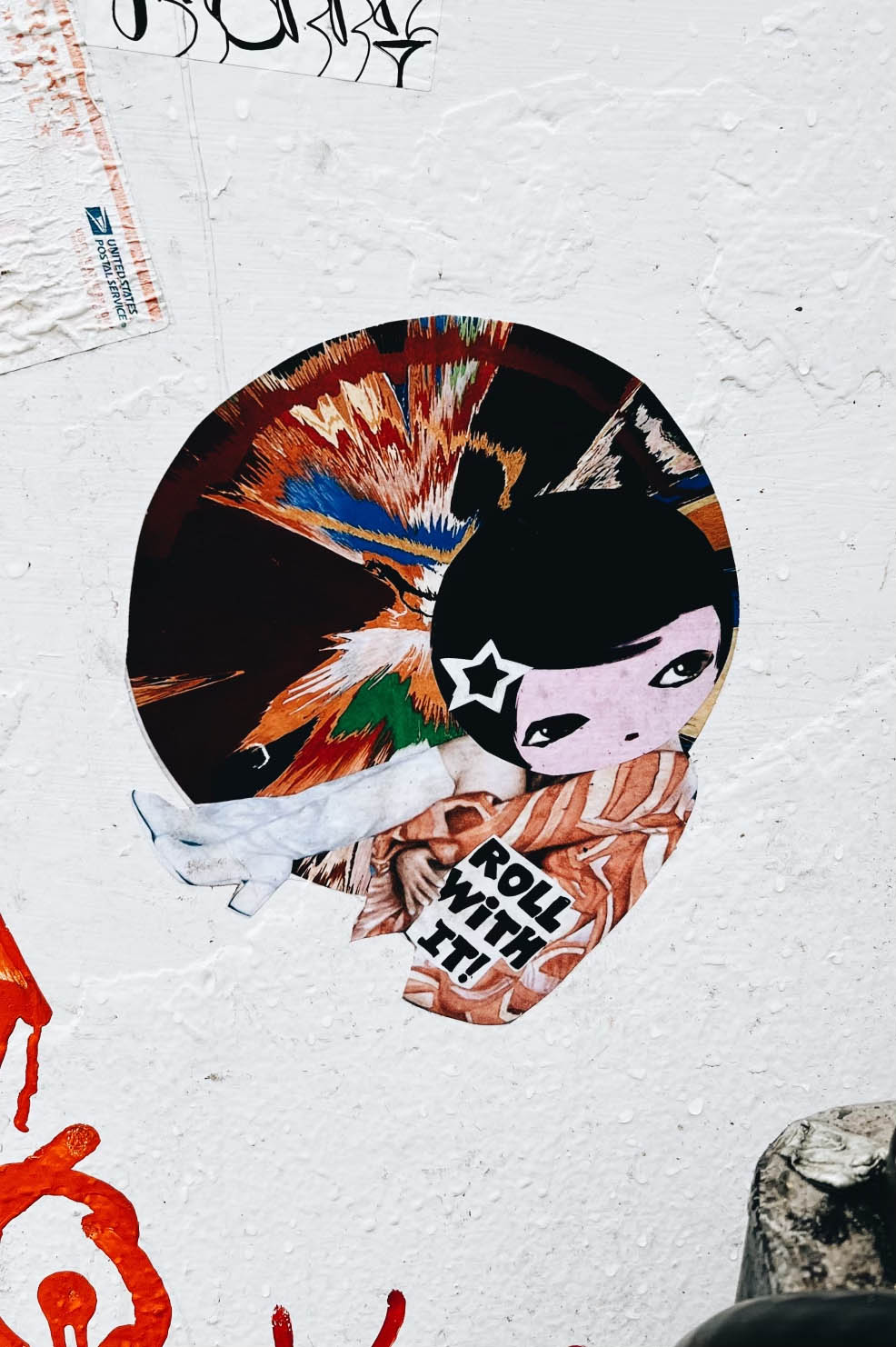 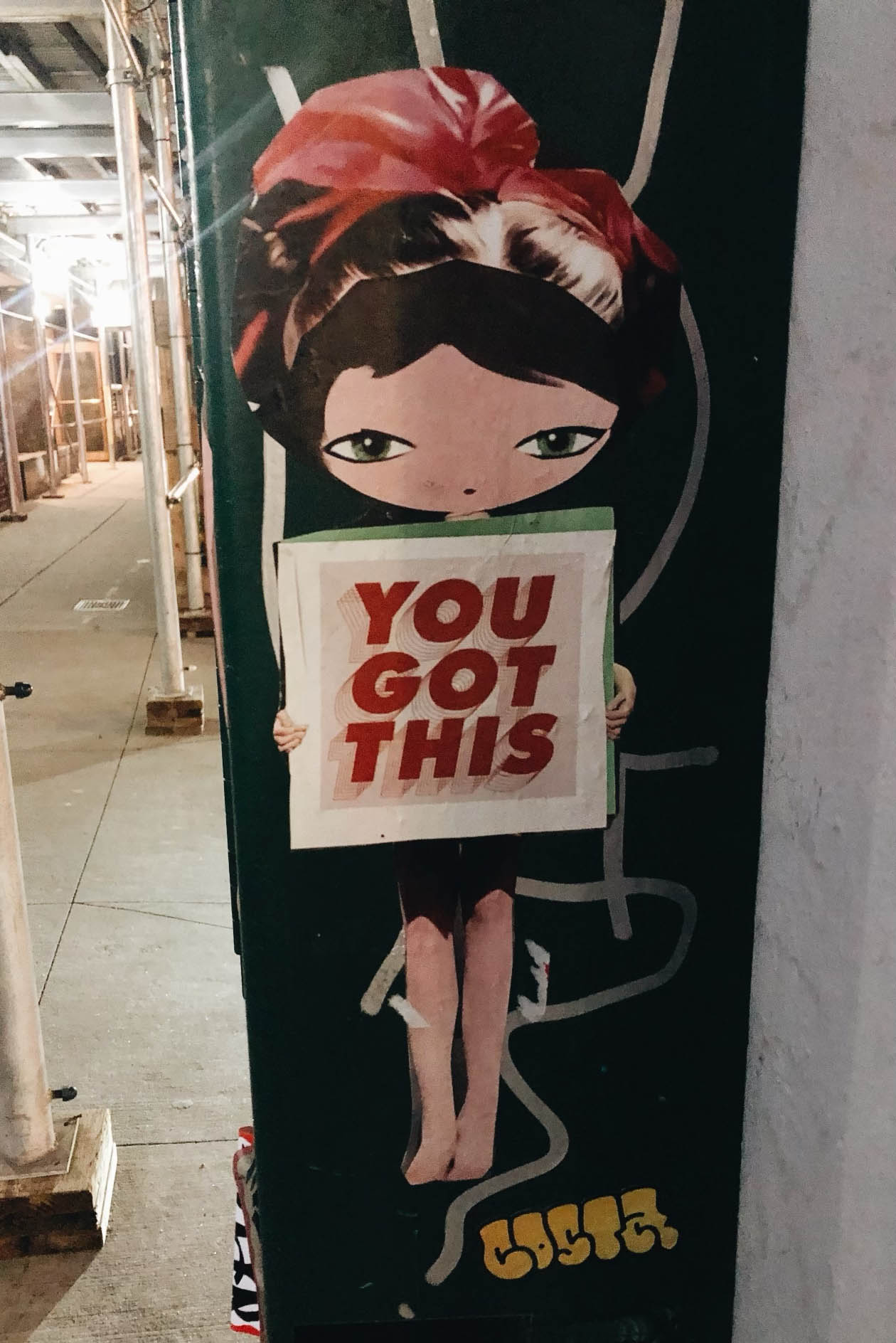 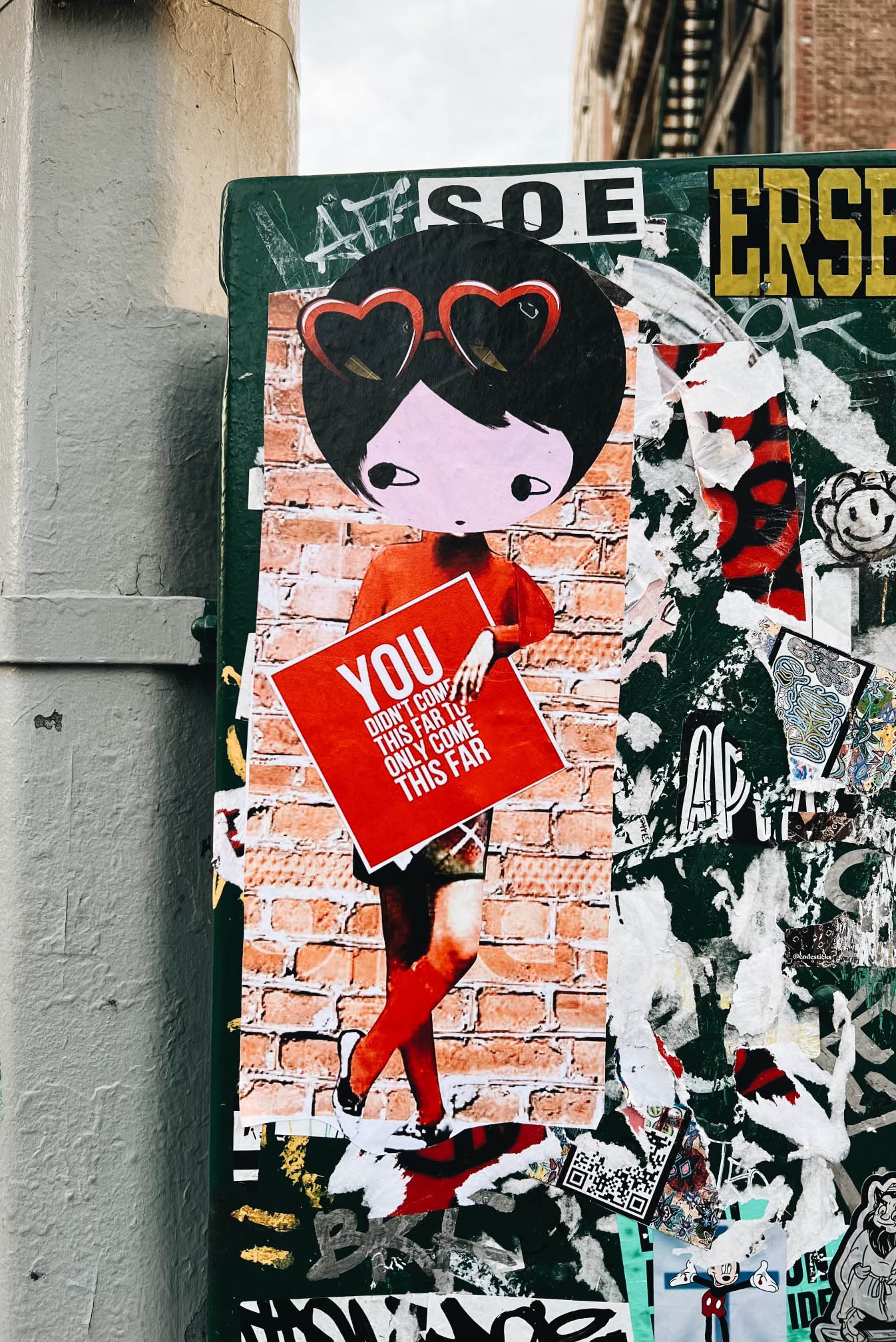 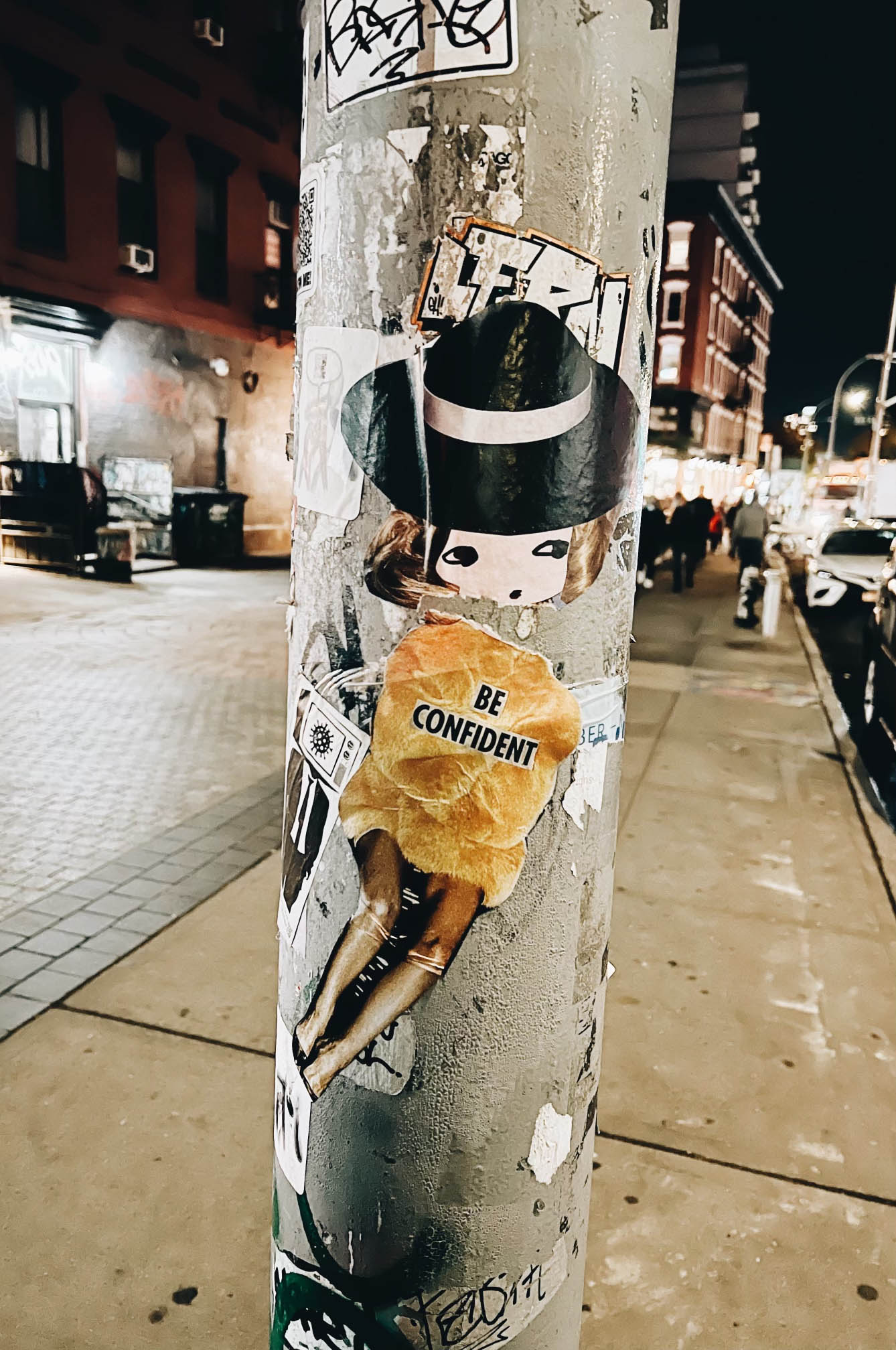 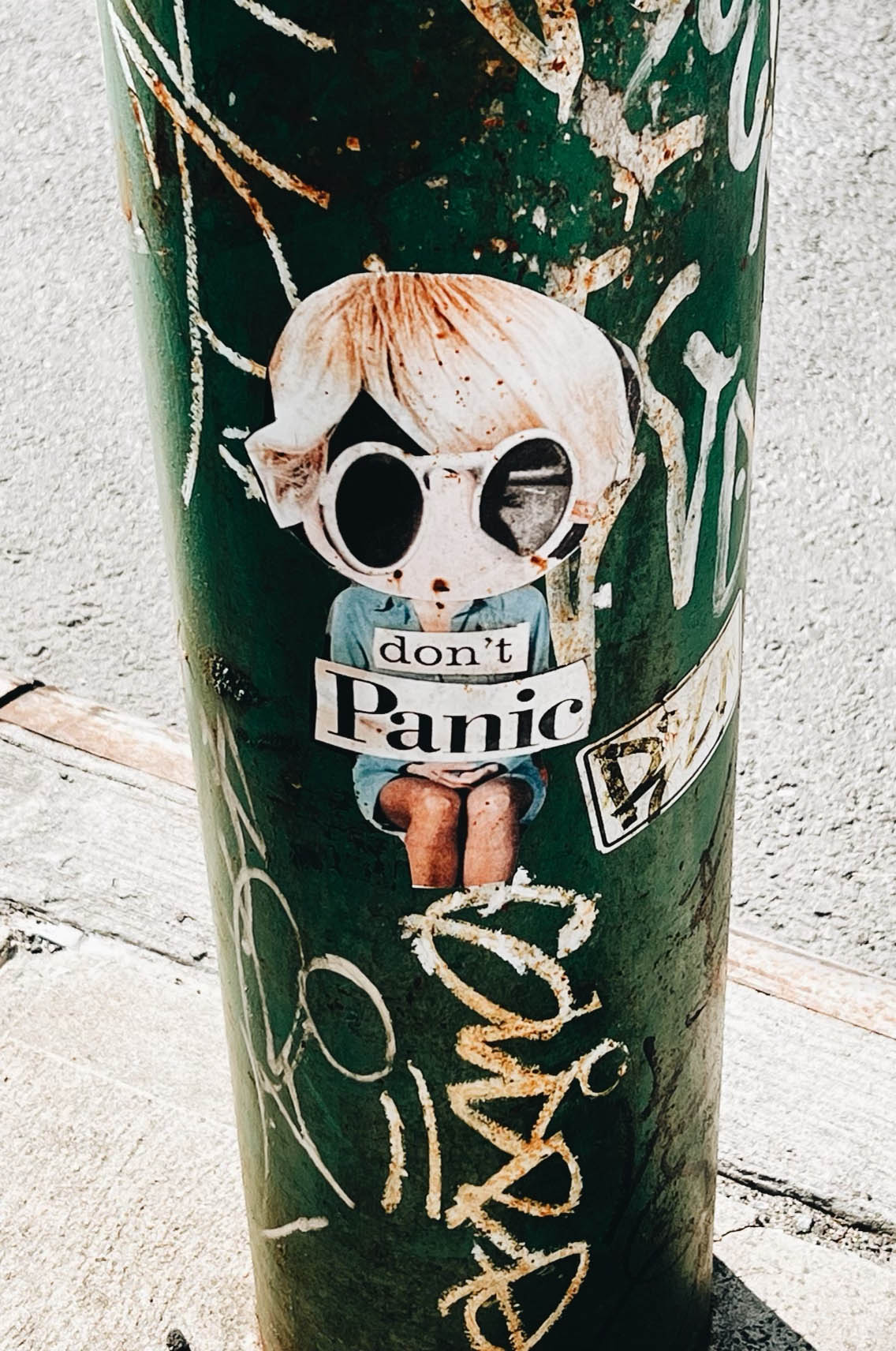 Some of the prints expressed yearning: 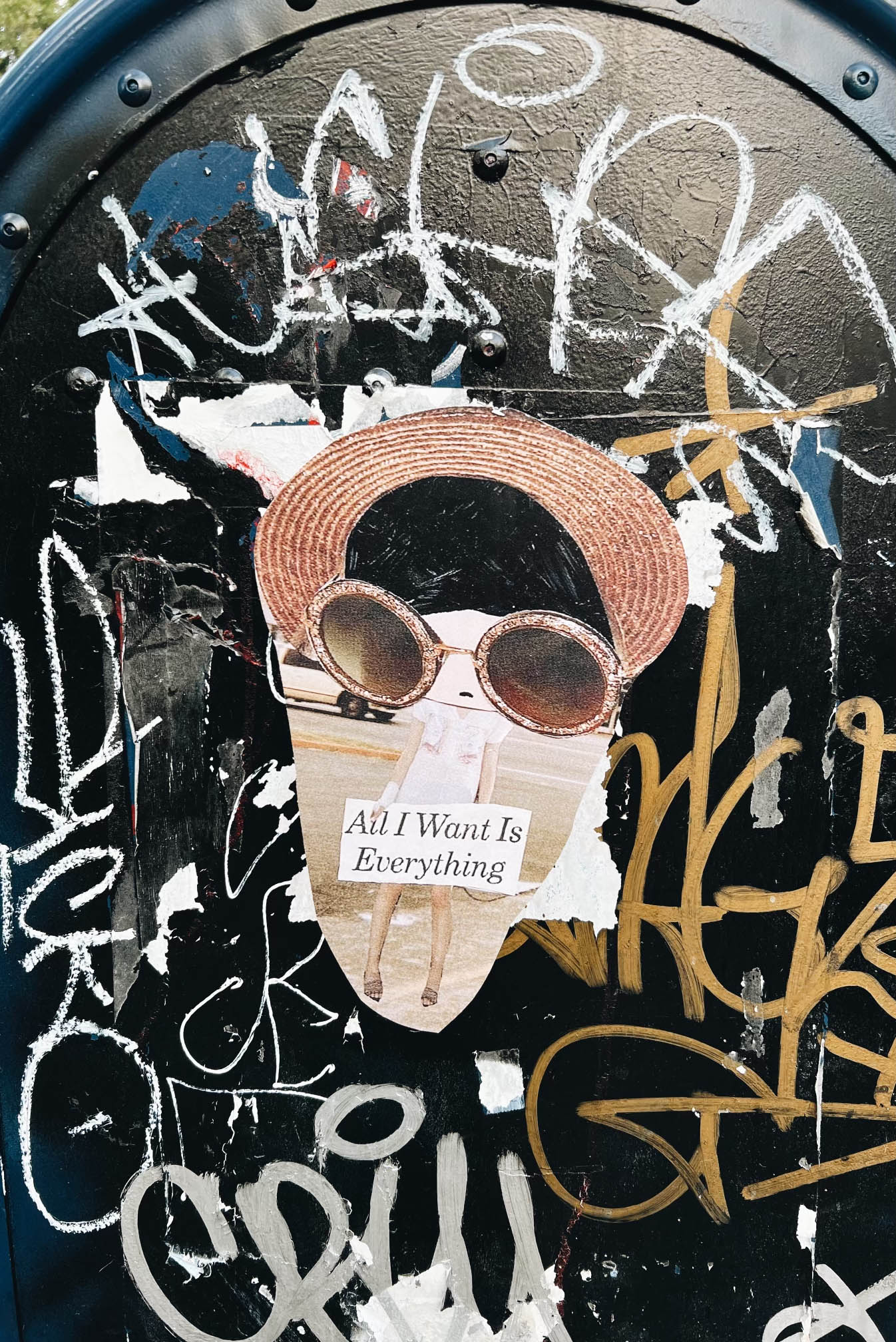 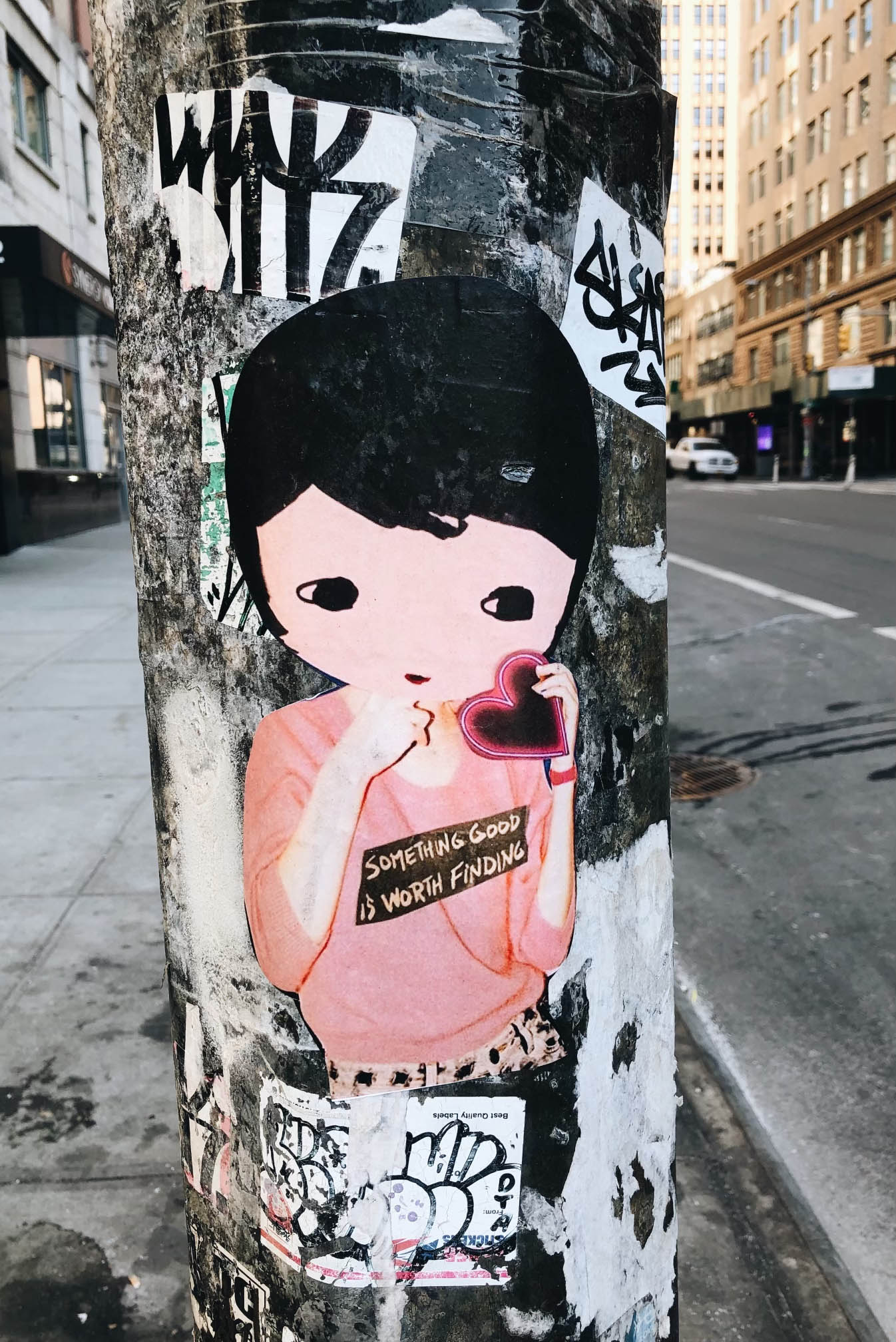 Others were spunky and spirited: 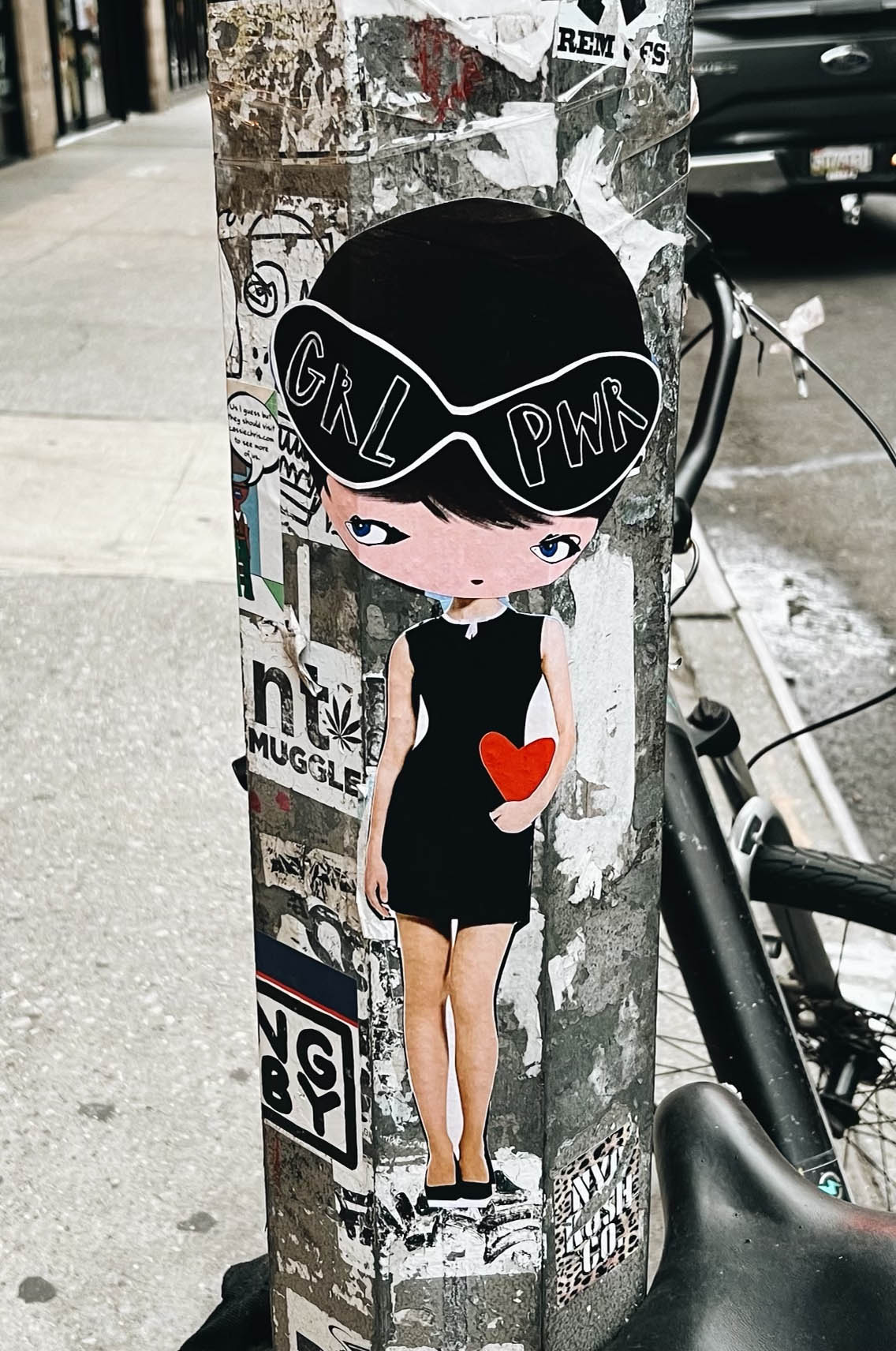 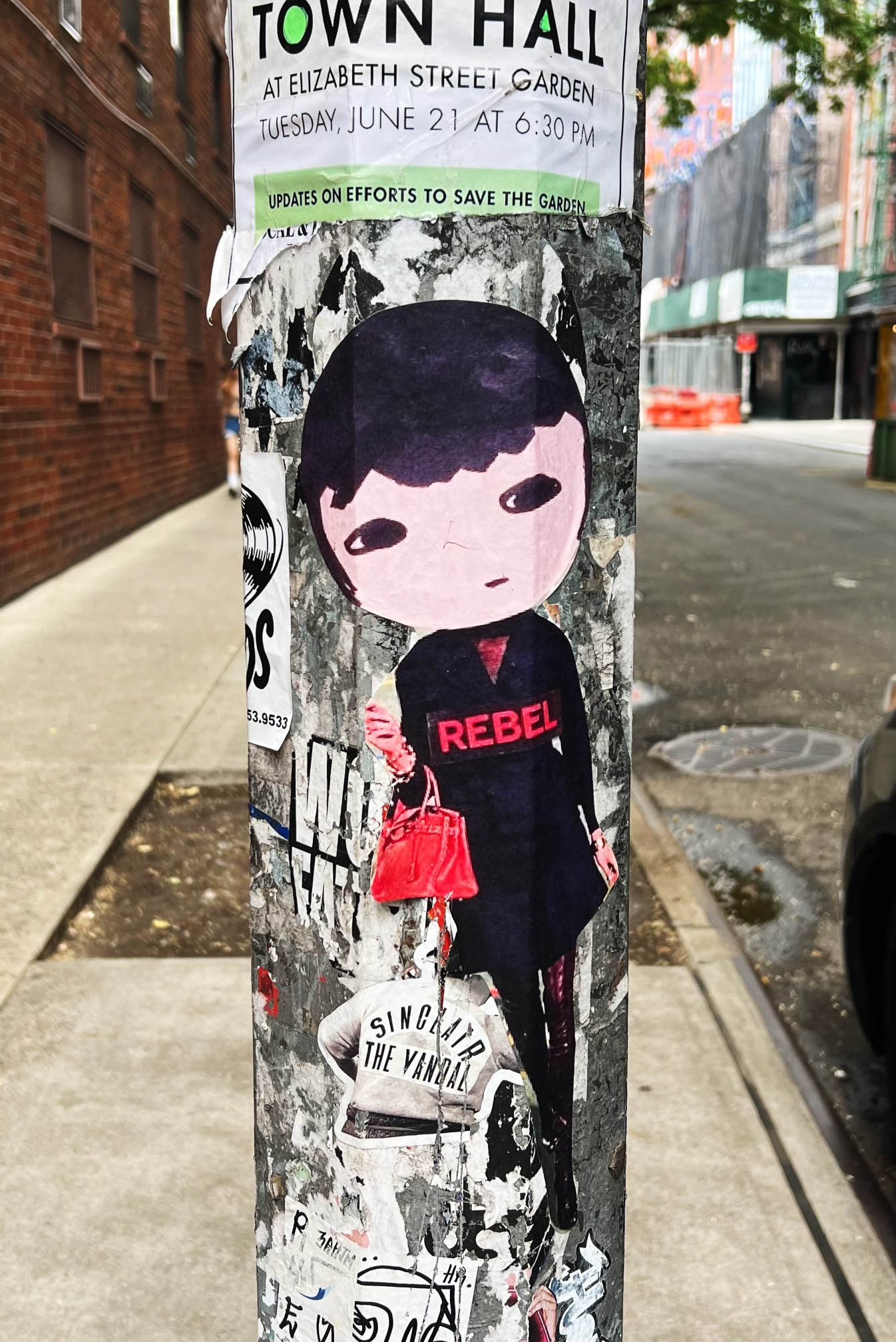 And some of the messages were just sweet. 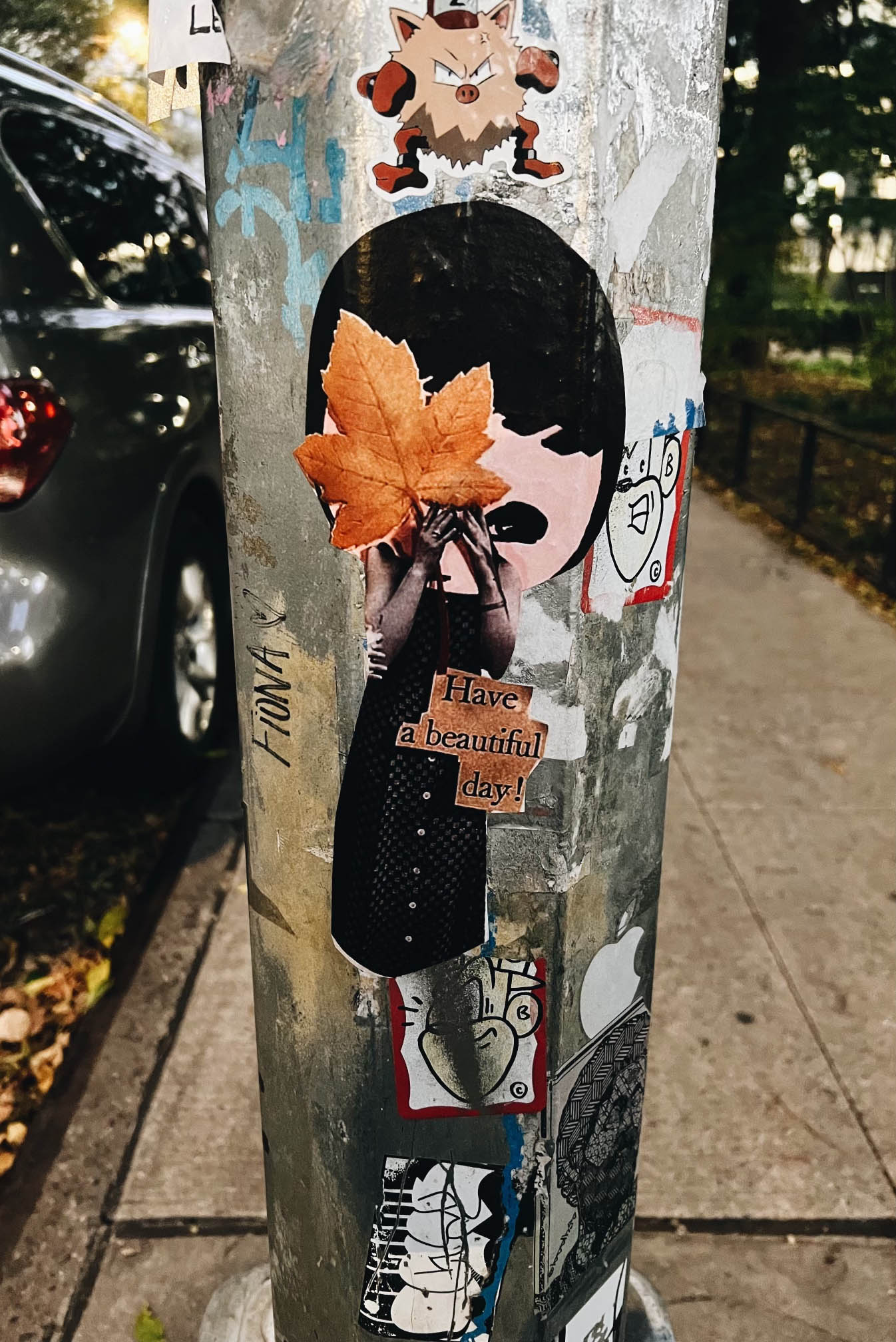 When I moved downtown, I only saw more and more of the prints. In fact, only a day or two after I moved, I saw the largest print I’d seen yet, less than half a block away from my new place.

This one was on a brick wall, at least a few feet high, rather than plastered to street lamp or hydrant. The woman in the prints had the Batman symbol on her chest.

“Put on the power,” the message next to her read. 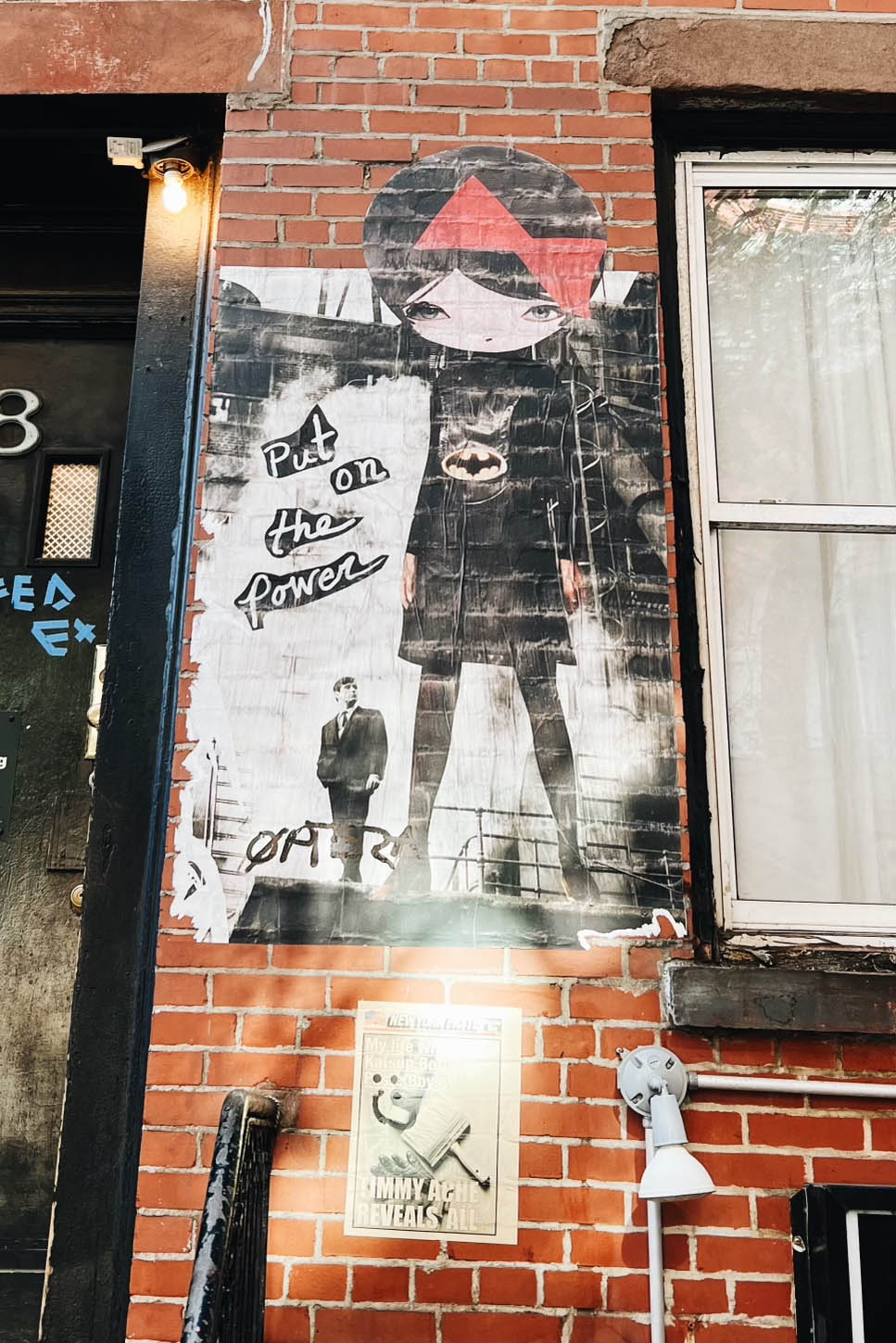 Each time I thought I’d seen all of the possible designs that there were to see, I’d encounter another. Stumbling on them felt like uncovering the next clue in a treasure hunt.

I’ve posted a lot of photos of the prints in my Instagram stories. At one point someone messaged me to ask who the artist was.

I felt bad telling her that I didn’t know. A part of me had been enjoying the element of mystery surrounding the prints: not only the mystery of how they appeared all over the city, but also the mystery of the woman depicted in them.

Who was she? A made up character? An alter ego?

This past week, I set out to learn more about the origins of these sometimes playful, sometimes dark, slyly funny images.

I learned that they’re the work of artist Libby Schoettle. The character in the prints is indeed an alter ego—her alter ego—and her name is PhoebeNewYork.

Apparently, PhoebeNewYork has been making appearances throughout the city since 2015. It just took me a long time to take notice of her.

Learning more about the artist behind these works actually hasn’t taken away from the fun of finding them on surfaces all over town. In fact, it only deepens my relationship with the art to know that I’m one of many thousands of people who appreciate it.

I seem to stumble on PhoebeNewYork exactly when I need one of her messages. It always seems like serendipity to me; I come across her especially when I’m feeling a little down and out, tired or discouraged. She perks me up, lifts my spirits in the way that running into a friend on the street might do.

Do I find PhoebeNewYork on those days and at those moments as a matter of luck? Or does some part of me know to look out for her, scanning the nearest street light or patch of brick and hoping she’ll be there?

How many other folks in NYC do this, hoping themselves to smile at whatever plucky words  PhoebeNewYork has to offer that day?

Who knows. But I’m glad we have her.

Happy Monday, friends—I’m a day late, obviously. And happy Halloween! Here are some recipes and reads. 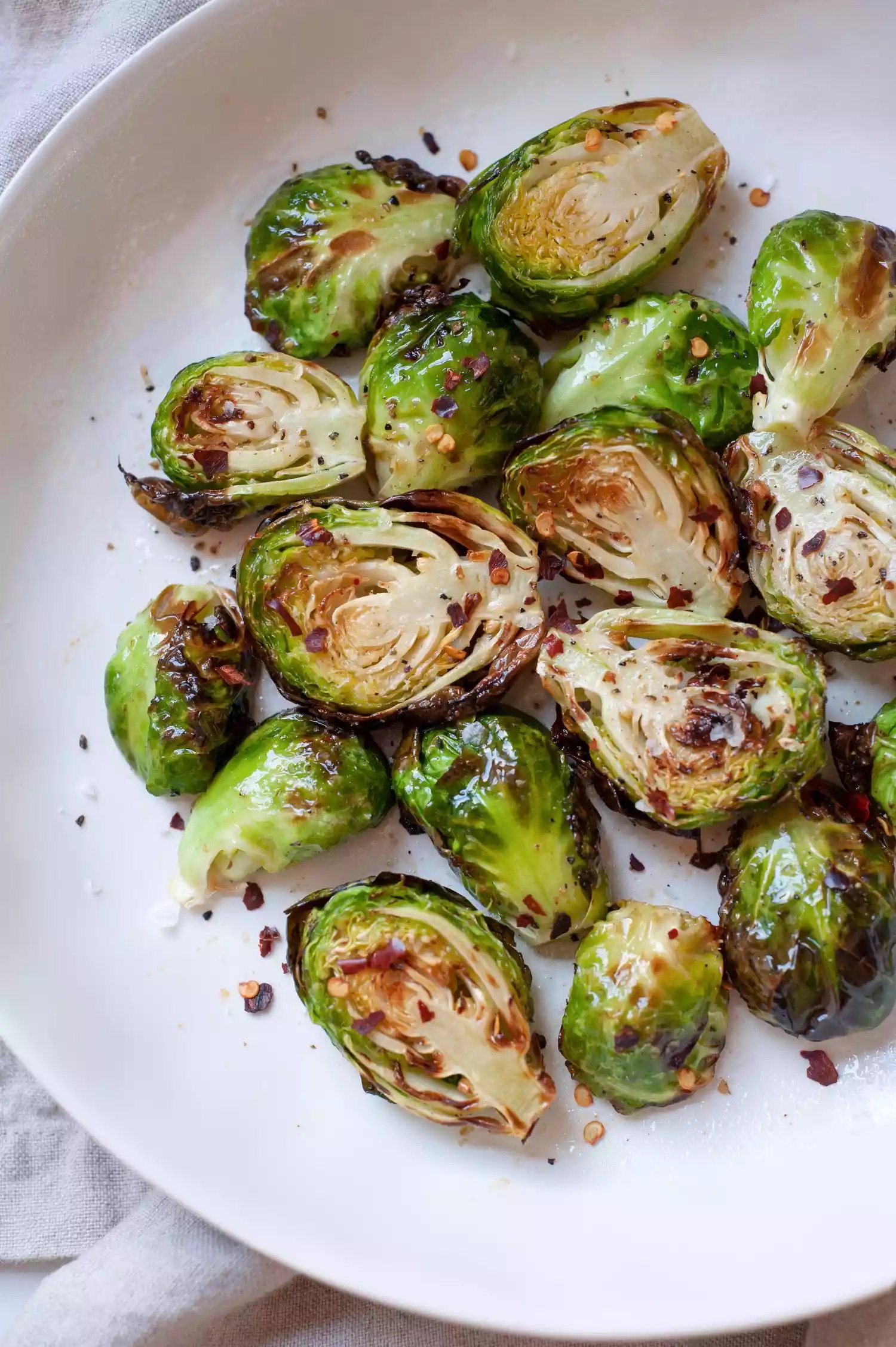 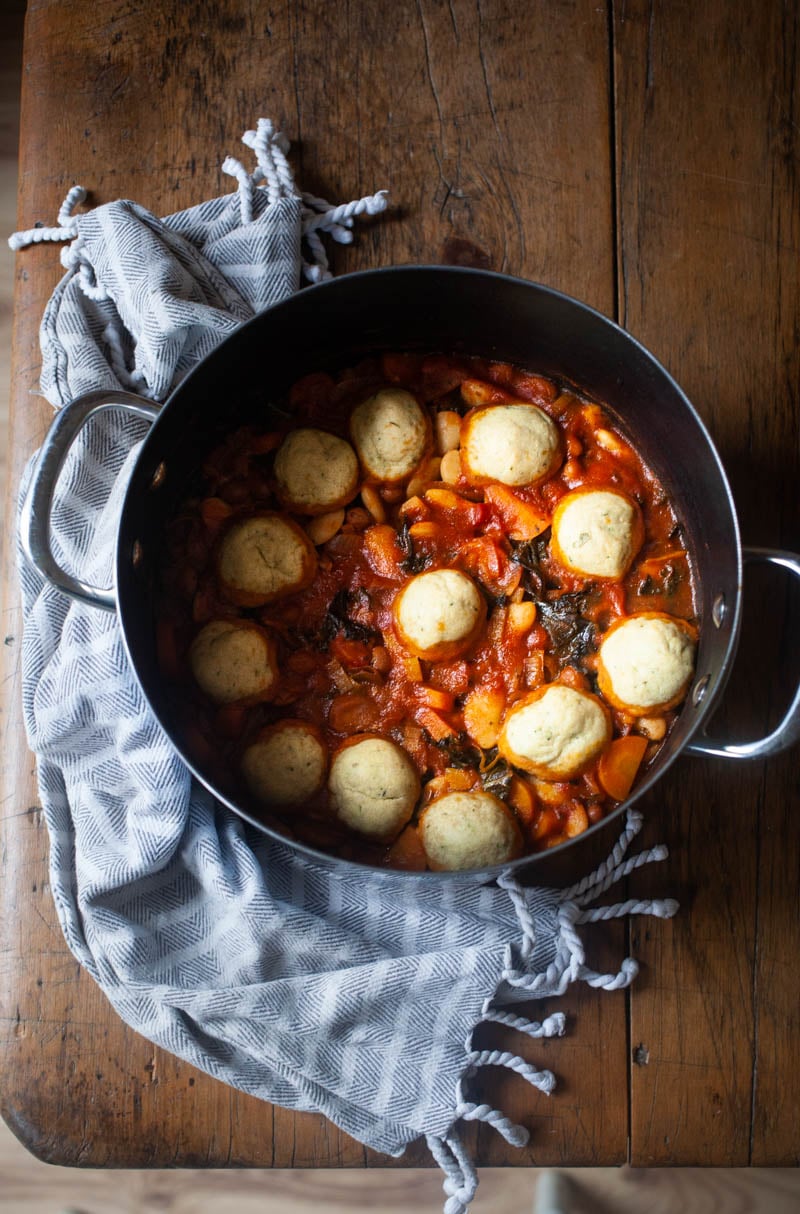 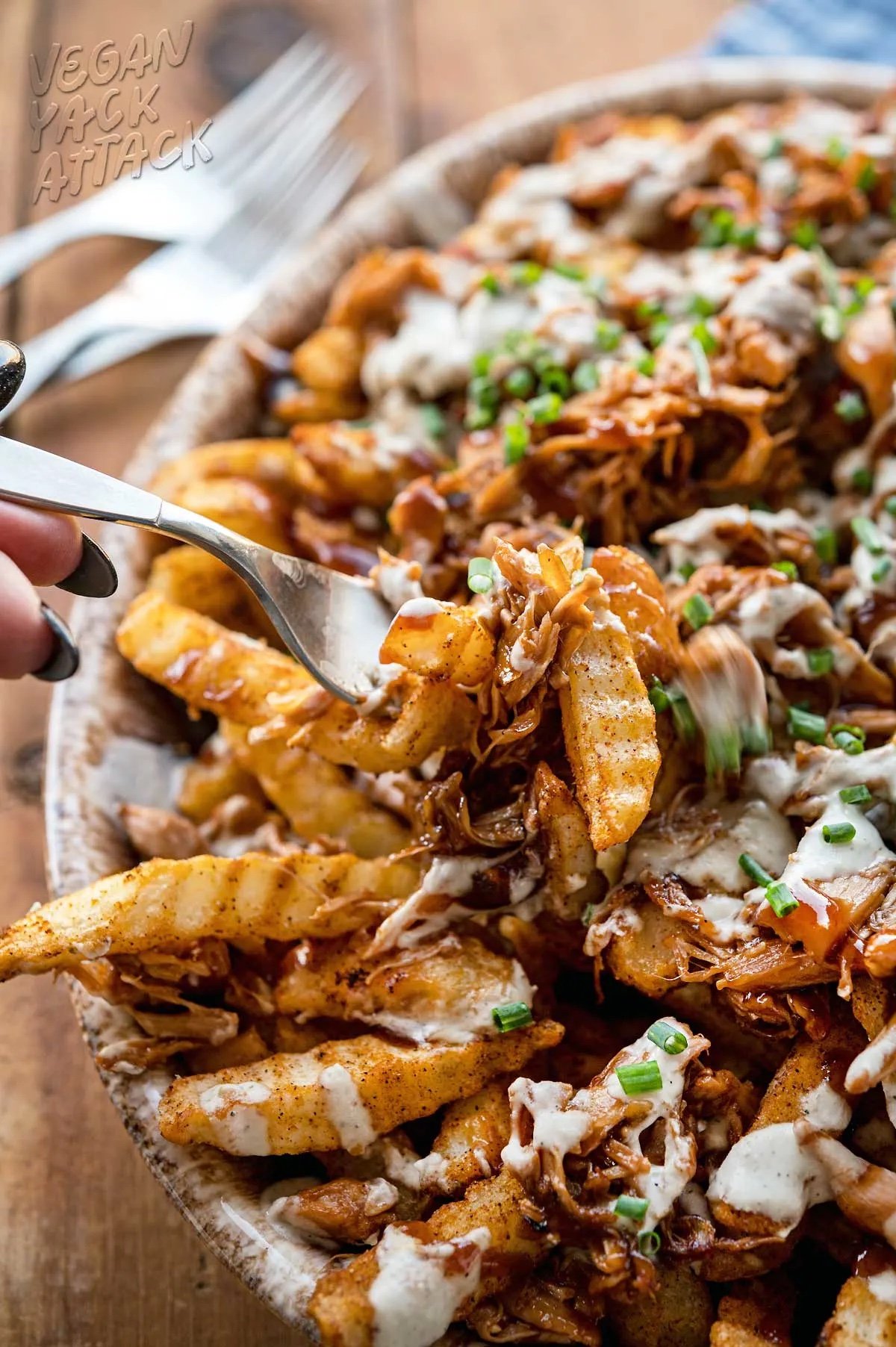 Jackie’s BBQ ranch fries look out of this world! 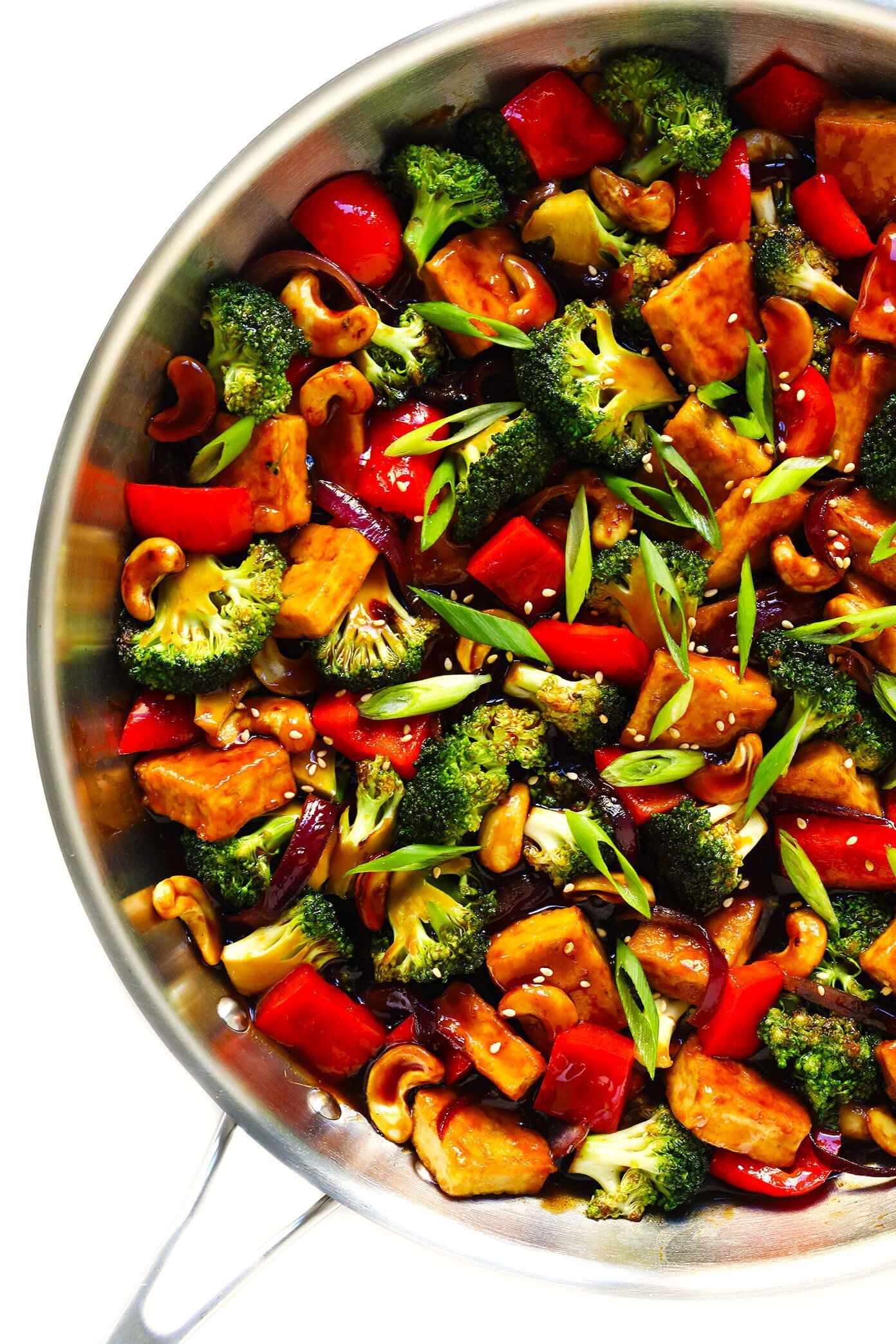 Ali’s cashew tofu would be a great, simple protein to include in my meal prep sometime. 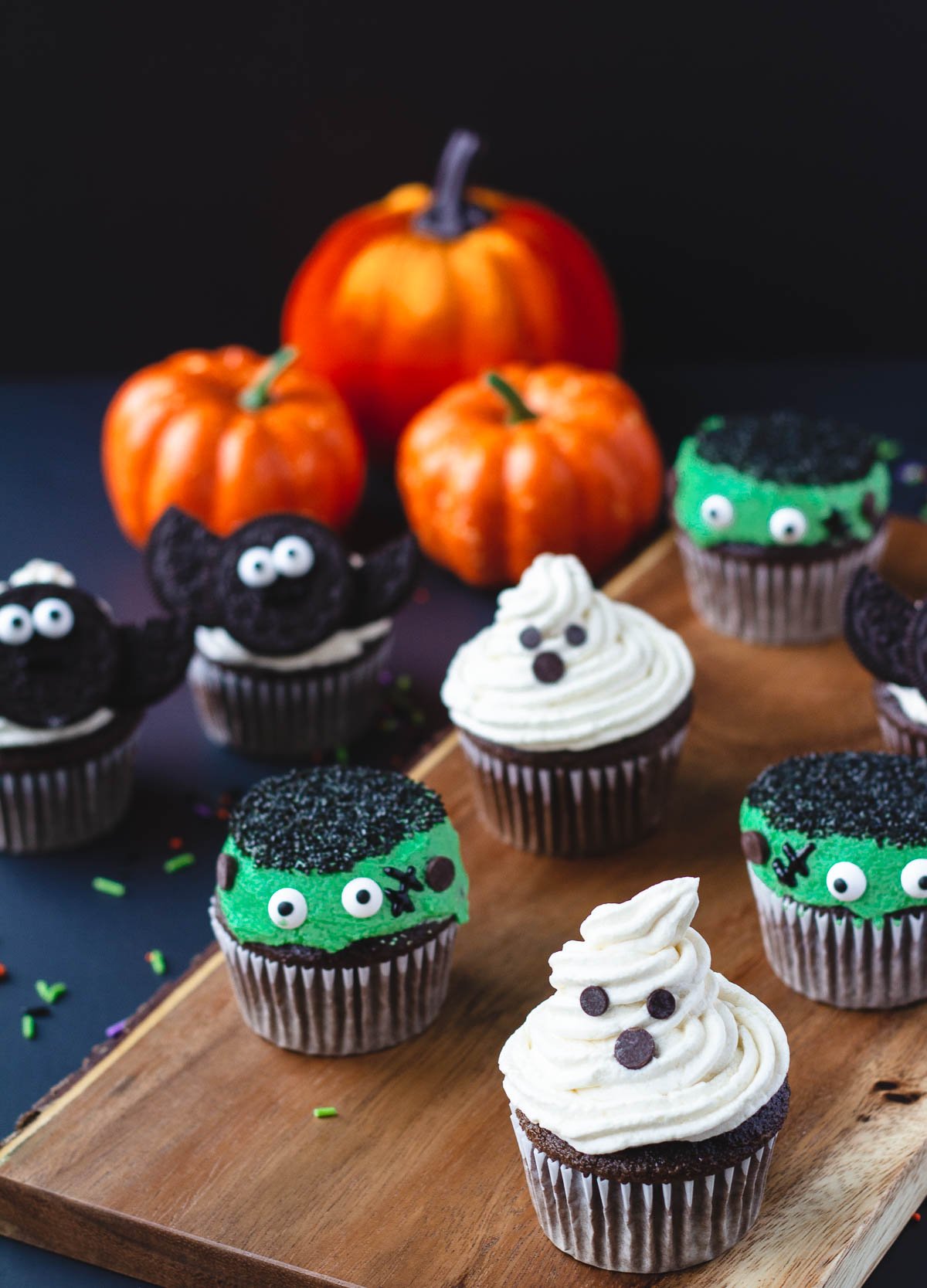 Some festive vegan cupcakes in honor of Halloween.

1. An interesting look at why girls are hitting puberty at earlier ages, especially since the pandemic started.

2. So touching: refugees around the world were asked what single keepsake they would choose to take from home, if they had to choose only one. This article shares some of their responses.

3. I’m getting ahead of holiday pie-making by researching a question that I’ve always wanted a solid answer to: which apples are best for pie?

4. I’ve cried with my clients, and each time I’ve wondered if it was OK to show that emotion. This was comforting to read.

I’ll be back this week with some fresh recipes. And if you’re an email subscriber (which you can be by scrolling to the bottom of my homepage and signing up), you may soon get my first ever monthly newsletter in your inbox!

I’ve been slow in getting it written, as I seem to be with all tasks lately. But I’m excited to send it.

All through this Christmas week, I’ve had one repeating thought: “Please, please, please let me not hear ‘Have Yourself a Merry Little Christmas’ in a yoga class.” I’ve been OK and not OK, if that makes sense. Between Monday and Thursday, I wrapped up the last week of seeing nutrition clients before the holiday. I’ll be taking two weeks of rest from my private practice. The practical purpose of this is for me to catch up on my other work and put some…

I’ve just spent the better part of a week in warm and sunny Florida. It was quite a change of scenery from New York, which was still chilly and windy when I left. I mainly went down to spend time with my oldest friend and her kids. I try to do this as often as I can, especially while the girls are as young as they are right now. Making memories with them means everything to me. On my way home, I’ve gotten…