Happy Sunday, everyone. Thank you so much for your comments on Jen’s green recovery story on Friday. I know that they’re meaningful to her, and I always appreciate the chance to hear your insights.

Speaking of green recovery, it’s now officially National Eating Disorder Awareness Week. In honor of that, I’ve put together weekend reading links that include articles and essays about EDs. I hope you’ll find them interesting and informative, and if you think any of them might be worth sharing with family, friends, or loved ones, then I encourage you to do so.

But before we dive into some reading, no weekend post would be complete without a recipe roundup!

First up, some breakfast fare. These banana blueberry muffins from Hana of Nirvana Cakery are super wholesome, thanks to a base of buckwheat and teff flour, and they look delicious. Frozen blueberries would be an easy swap for fresh at this time year. 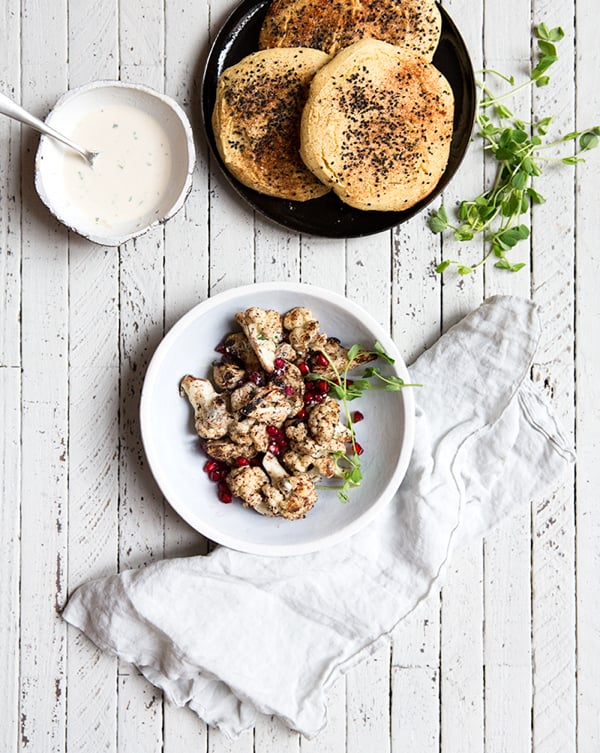 Jodi of What’s Cooking, Good Looking has done it again, this time with a creative recipe for cauliflower shawarma and homemade chickpea pita bread. So tasty, not to mention visually appealing. The chickpea pita is not vegan, but I’d love to give it a shot with 1 1/2 flax, chia, or Ener-G eggs — let me know if you happen to try it successfully! And of course, regular or whole wheat pita would be great with the shawarma, too. 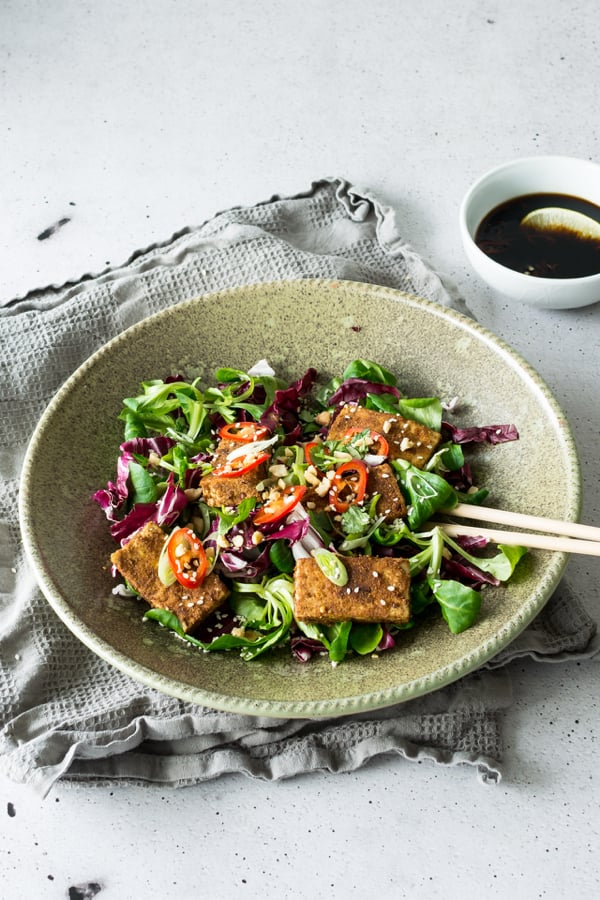 I love Lauren Caris’ recipe for dry rub tofu salad with chili lime dressing. The tofu is dredged in a flavorful mix of spices, and the salad offers plenty of brightness and crunch. 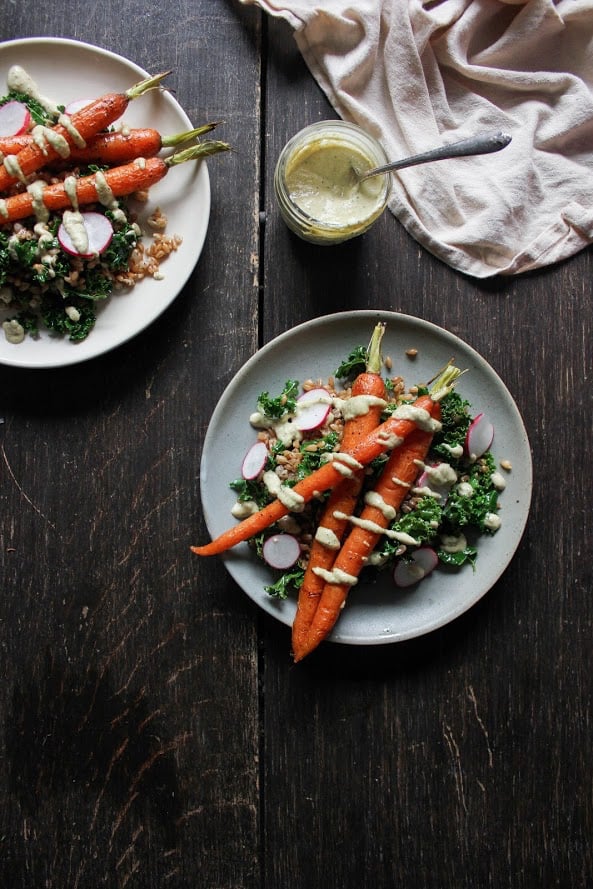 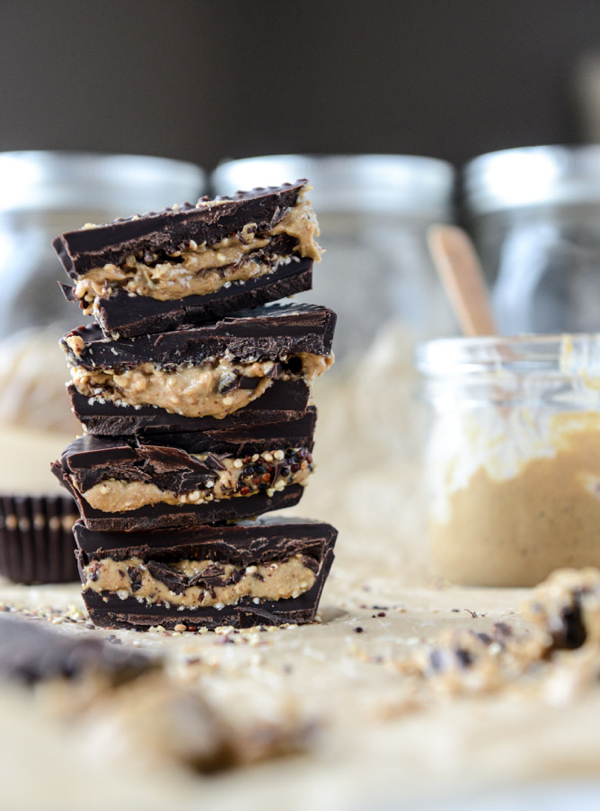 1. I think Suzannah Weiss’ article, 7 Common Misconceptions about Eating Disorders and How They Actually Work, was spot on. Weiss delves into many of the most problematic, common assumptions about eating disorders and disordered eating, including “if you don’t have an eating disorder, your eating is not disordered” (a particularly harmful myth, and one which prevents many women and men from seeking help), “eating disorders are a choice” (as the author notes, “nobody sits down and thinks ‘I’d like to have the compulsion to binge and purge’ or ‘I’d like to have such a crippling fear of food that I need to be hospitalized so that people will make me eat’) and “it’s obvious when someone has an eating disorder” (false–and people with EDs become experts at hiding it).

She also blasts the idea that men and women with EDs are trying to be sexy or desirable. Certainly they’re often influenced by social constructs of beauty and acceptable body shape, but the causes of EDs and disordered eating are usually much deeper and far-reaching than that, and sometimes disorders are actually tied to fear of or rejection of sexuality.

Being told, when you’re struggling, that “men like curves” (something I heard all the time when I was sick) is not helpful. As Weiss notes, “what men supposedly like has very, very little to do with why women binge, purge, or starve.” Not to mention the fact that gendered statements like this turn EDs into a women’s problem, ignoring the many thousands of men who struggle with disordered eating and eating disorders, too.

2. I love Kari Highman’s article on the lack of attention and awareness that surrounds Binge Eating Disorder (BED), which affects about 3.5 percent of women, 2 percent of men, and 1.6 percent of adolescents in the United States. Highman captures the feelings of pain that can result from having one’s disorder minimized by well-intentioned, yet oblivious advice:

“I have been told by some that I should simply “eat three meals” or that I should just “exercise some more.” Much like people with anorexia or bulimia nervosa, comments like these can make the behaviors even more obsessive and dangerous. When people make these remarks I can’t help but think: ‘Oh well I’m already running a mile a day, but they can see I’m fat, so I must run two more.’ Or: ‘I’m already restricting to make up for a binge, but they obviously must think that I’m still eating too much.’“

She also notes how profoundly isolating it can feel when one’s very real struggle goes unnoticed because of a seemingly normal BMI. This is an important article for caretakers, friends, peers, and anyone who might brush paths with a population of folks who are susceptible to EDs, because the signs and symptoms very often have little to do with weight.

3. A new article in Aeon discusses the potential of deep brain stimulation to treat anorexia. This is bound to be controversial, as the treatment is highly invasive and involves many potential complications and risks. But I found the article to be interesting, in part because it gives a really strong account of the genetic and neurological underpinnings of anorexia, as well as some evolutionary mechanisms to explain the “high” that anorexics often feel during starvation and fasting. The article’s subject, a woman called Brenda, has had a harrowing experience, but she seems to be on a stronger and more peaceful path.

4. While 10 million men in the United States will suffer from a clinically significant eating disorder at some time in their life (as compared to 20 million women), studies suggest the mortality rate is higher for males than it is females. Meanwhile, eating disorders and disordered eating among men receive far less public attention than do EDs in the female population, and the language used to discuss EDs is often highly gendered and female-specific.

Michael Elmer’s account of being denied treatment options because he was male is heartbreaking. Elmer did ultimately receive the help he needed, but only after a difficult search for care. This article is worth reading and sharing as a means of drawing attention to the diseases that affect so many of us–men and women both. Men may speak up about EDs less often than women, because there’s still more silence surrounding their struggle, but that does not mean that the struggle isn’t happening.

5. Finally, an inspiring and empowering article to end with. This is the fabulous Melissa Fabello‘s list of the five “body love languages”. They include kind language, physical touch, and what Fabello calls “quality time.” I also love her notion of “acts of service”–small ways that we can listen to and deliver on our bodies need for attention, rest, and more. Every single one of these approaches has been helpful to me in my struggle to overcome body dysmorphia, whether I was consciously aware of using them as tools or not. I highly recommend checking the article out.

If you or someone you know is struggling with food, body image, or eating patterns, please see this week as an invitation to start a conversation about it. If you’re looking for practical resources, the NEDA website offers tools for screening, as well as ways that you can take action. Most importantly, know that you are not alone. There is strength in sharing our experiences, in vocalizing the struggle, and in banding together.

A week-long head cold wasn’t how I planned to begin 2019, but the nice thing about having some time off from the DI is that I’ve been able to absolutely nothing in the last few days, aside from drinking tea, answering emails from my phone, and catching up on television. In the past, I’ve been great at talking about the importance of rest and slowing down, very bad at actually doing those things without an overlay of guilt or nervousness about what isn’t…

Welcome back from the holiday weekend, friends! If you celebrated Thanksgiving, I hope it was a great one, and if you didn’t, I hope that you’ve had a restful and restorative few days. Here are the weekend reading links I’ve been collecting. You’ll notice that a bunch of them still seem Thanksgiving themed–and why not? No reason to stop feasting. I’ve heard it said that there’s no suitable vegan equivalent for traditional green bean casserole, but that’s absurd–and Cara’s awesome healthy green bean…