Hello, all, and happy first of March. I can’t believe that the first two months of this year have flown by so quickly! It’ll be a while before it really feels like spring (as I write, I’m staring at snowfall outside my window), but time is moving fast, to be sure.

If you want to take a break from House of Cards bingeing–or another weekend routine–then I offer you the following reads and recipes. 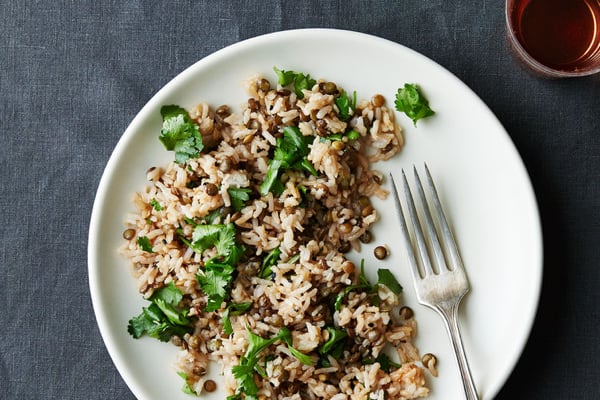 To begin, something simple and wonderful: a lentil and basmati dish with tamarind, coconut, and cilantro. I could eat this sort of dish–grains, legumes, fresh herbs–all the time, and be quite happy. 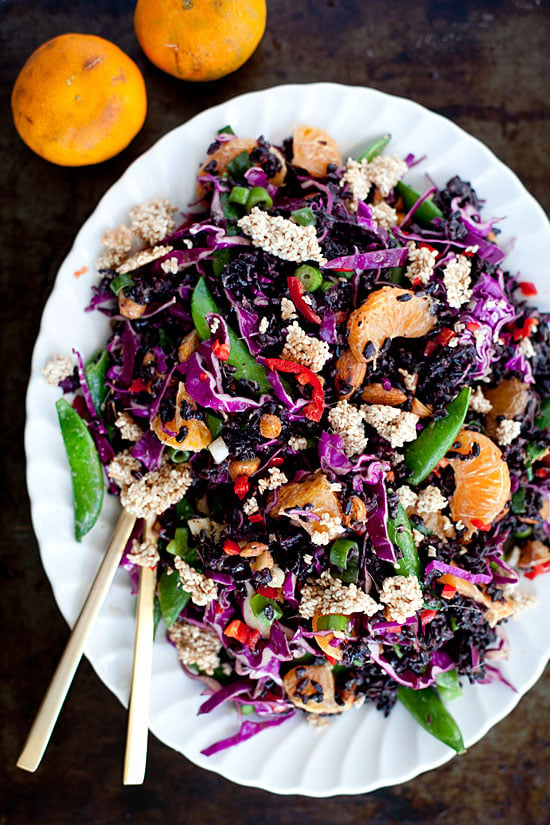 Moving onto something a little more dramatic, a colorful black rice, orange, and almond salad. This is the time of year to put citrus into anything and everything, and I can’t think of a more vibrant vehicle than this bright dish! 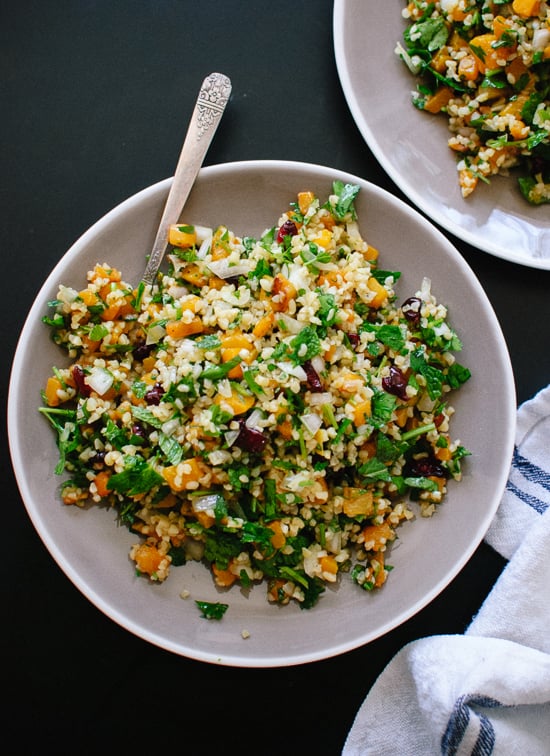 I’m pretty certain that Kate is a genius for coming up with this butternut winter tabbouleh. It is something that I would like to eat right now. (Feta is offered as optional; herbed cashew cheese would be awesome in its place.) 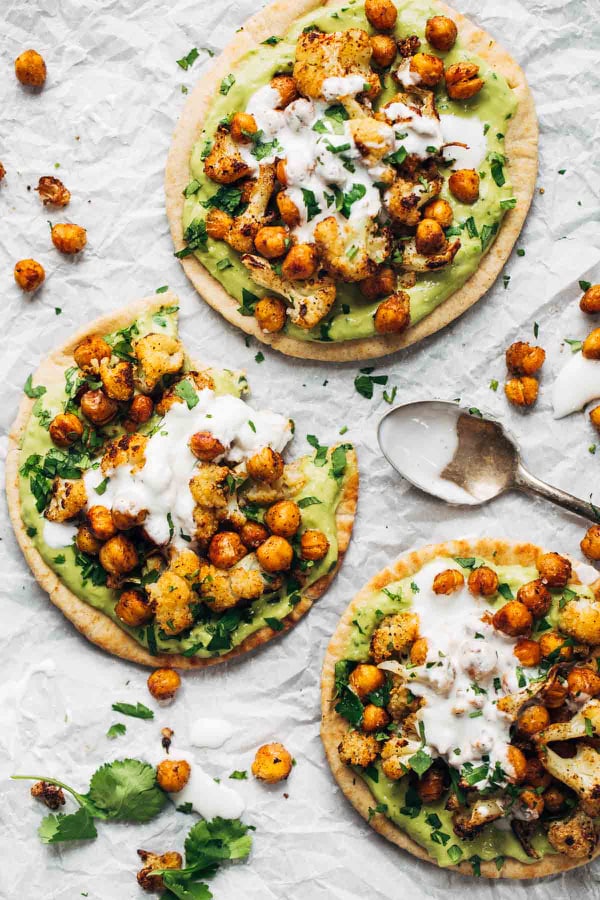 Chickpeas, avocado, and crucifers? I think I just went into some sort of favorite-foods-induced shock. What a great pita recipe, courtesy of Lindsay of Pinch of Yum.

For the yogurt suggested as a topping, you could use one of my two versions of coconut yogurt (one made with young Thai coconut, the other a very rich version made with coconut cream) or the plain WholeSoy & Co vegan yogurt, which I’ve been buying for years, and truly love. 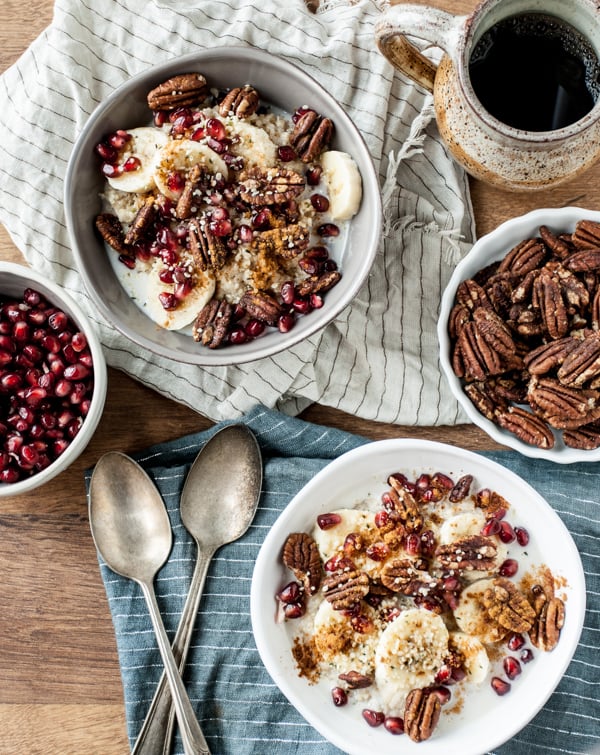 I could stare at porridge recipes all day, and this one is a super special feast for the eyes. Chai spices, banana, spiced pecans, hemp seeds…so much goodness here! Thanks to Andrea of Dishing Up the Dirt for this winter spiced breakfast porridge recipe.

1. This study, in which it was found that avocado consumption could help the weight loss efforts of 45 patients who were overweight/obese, is neither a large scale nor a very important study (though it does have some implications about the value of monounsaturated fats in weight and CVD risk management). But I thought I’d share it anyway, because I enjoy any chance to celebrate the mighty avocado 🙂

2. Journalist Lizzie Porter wrote a very honest article about her anorexia struggle for The Telegraph in honor of Eating Disorders Awareness week. It is, as many of these firsthand accounts are, sometimes tough to read, but it’s also full of honest and authentic insights. I was struck by Porter’s ability to admit the longing she sometimes feels for her disorder, not because she would ever wish to have the habits back, but because recovery has forced her to face the deeper sadnesses that EDs can serve to cover up:

As illogical as it may sound, anorexia is not really about food. Starvation is a manifestation of the problem, not the problem itself…Sometimes, I lie awake at night and mourn my anorexia, if only because it was a cover for the sadness that has encroached as the food preoccupation has faded.

I also appreciate Porter’s emphasis on the fact that weight restoration is not by any means the full measure of recovery. The weight gain process can be significant, of course–for me, it was a step that had to be faced in order for me to truly get better–but I believe that recovery is much deeper and more profound than weight restoration. So does Porter:

Recovery does not come automatically when one has reached a normal weight. It comes when the disordered thoughts are no longer acted upon, even if the voice that emits them still exists. Anorexia is truly the worst version of myself, a part I dislike intensely, but which I will accept. One day it will lie utterly powerless, a sad squeak in the corner of my mind that has no influence on my behaviour.

Finally, I was touched by Porter’s closing words, a meditation on how vital recovery is if we’re to capture the precious time we have. These are good words (and a good perspective) to keep by one’s side in the face of recovery ups-and-downs:

Another moment which gave me pause for thought while I was still in hospital, was when I had to explain to a work acquaintance that I needed to rearrange a meeting. His response meant more than he could have known: “The wonderful thing about young age is that we have plenty of time to reschedule for another time.”

Meetings can be rescheduled, but life cannot be. Time only runs out once, and I do not want to grow old with this.

3. PCRM conducted a very cool study on the impact of transitioning to a plant-based diet within a single workforce. The non-profit–which is openly pro-vegan–persuaded more than 100 Geico employees to transition to a vegan diet for 22 weeks. The participants dropped an average of 10 pounds and lowered their cholesterol by 13 points. They also reported increases in overall productivity and saw improvements in anxiety, depression, fatigue and general health compared with workers at five other Geico locations in the study.

I think this is cool, and I also really like the approach that the study authors took to make the diet feel approachable. According to the Washington Business Journal, which covered the study,

So how in the world did these researchers get so many people to make such a drastic change, cutting nearly ubiquitous animal-based ingredients — including milk and eggs — from their diets? They made sure these employees weren’t just living on tofu.

Workers could have foods such as meatless spaghetti, hearty soups, and bean burritos, Barnard said. The company put plant-based meals in their cafeterias, making them as easy to eat as options with animal-based foods. Then the company brought in nutrition experts to teach workers during a few lunch breaks how to make vegan foods they’d enjoy.

It is so vital for folks who are new to plant based diets to glimpse the incredible variety and range that this way of eating has to offer. Kudos to PCRM for creating a study in which plant-based diet was made to feel feasible–and for helping the participants to experience increased health and vitality as a result of the changes they made.

4. A thought-provoking article from a physician about the ways in which doctors fail to support each other when it’s most necessary for them to do so.

5. The folks at SweetGreen recently put together a photo series that sought to recreate lunches from around the world. The company assembled a series of plates that are meant to be representative of a typical lunch from a particular country; the plates were determined by interpreting local government standards and studying Tumblr photos taken by elementary students.

The point of the series was to demonstrate how the school lunches reflect local ingredients and cooking traditions, and I think what’s most arresting about the slideshow is the variation of foods and eating styles. Worth checking out!

It’s going to be a busy week here at CR: tomorrow, I have a wonderful skincare giveaway for you guys. On Tuesday and Thursday, I’ll be sharing new recipes, and on Friday, I have a wonderful new green recovery story to introduce to you all. See you soon!

I had such high and hopeful intentions to post this weekend reading before today, so that everyone could bookmark the Super Bowl recipes I’d picked out. Work got in the way, and I’m the worst. But you should still bookmark them, because even if you don’t have time to prepare them today, these vegan dishes are show-stopping, hearty, colorful, and absolutely delicious. And beneath them, you’ll find the articles and posts that piqued my interest this past week. If you ask me, dips…

Happy Sunday, all. It’s a cold and rainy day here in Northampton, MA, where I’m currently visiting for the weekend. I hope you all took some time to read Claire’s moving green recovery post from Friday. Once you’re finished with that, you can get immersed in the following recipes and reads.      This cauliflower salad with chickpeas, kale, cumin, lemon, and toasted buckwheat is so full of textural contrast! Love it. I want to drink a vat of this kale and potato soup…

Happy weekend, everyone! I hope you’ve been enjoying some restful time and sunny weather. I’ve had a busy weekend so far; last night, I had the honor of teaching a vegan cooking class at Haven’s Kitchen here in New York. It’s a beautiful space, and it allows for cooking classes of intimate groups (my class had ten students). We got to know each other, cooked five recipes from Food52 Vegan, and then sat down to a late dinner, so that we could enjoy the recipes…