Happy Monday, folks. It was all rain, all the time here in D.C., but I’ve woken up to bright skies and the promise of a warm day. Here are five recipes and five reads that will be softening my transition back into the week. I hope they might distract and entertain you, too. 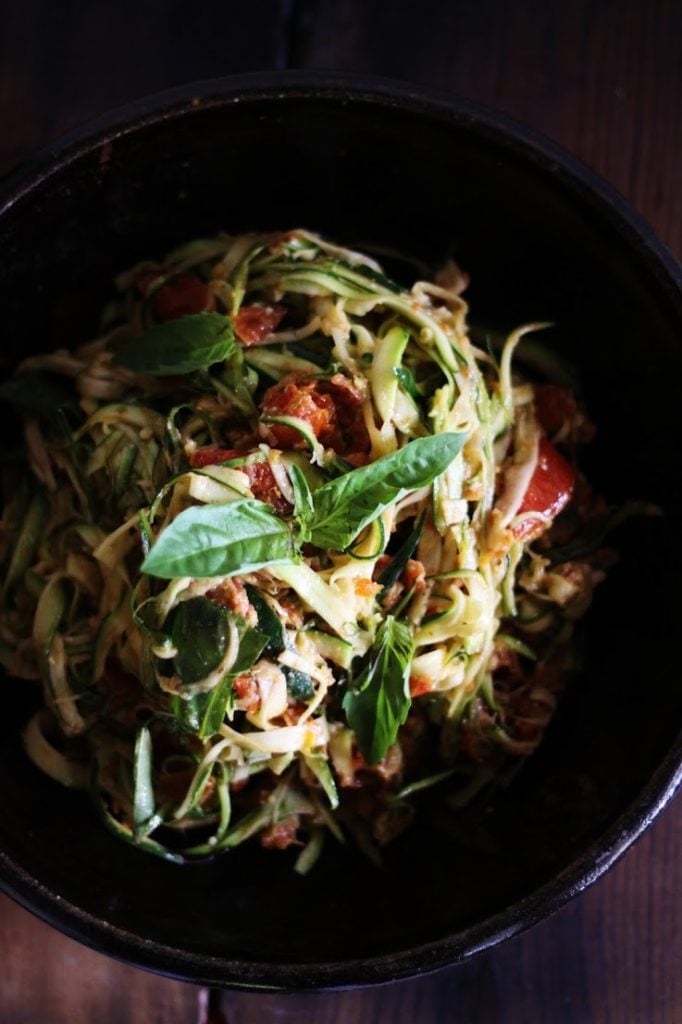 It should come as no surprise that everything Emily makes is gorgeous and enticing, but I’m still wondering at the fact that she can make simple zucchini noodles with sun dried tomatoes look so totally delectable. 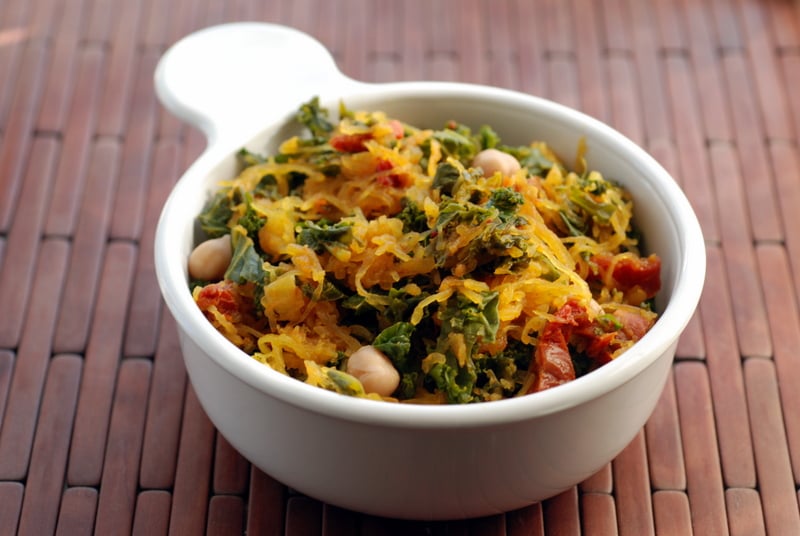 While we’re on the topic of noodles, a characteristically creative and nutritious meal from Janet: kale ribbons with chickpeas and curried spaghetti squash. 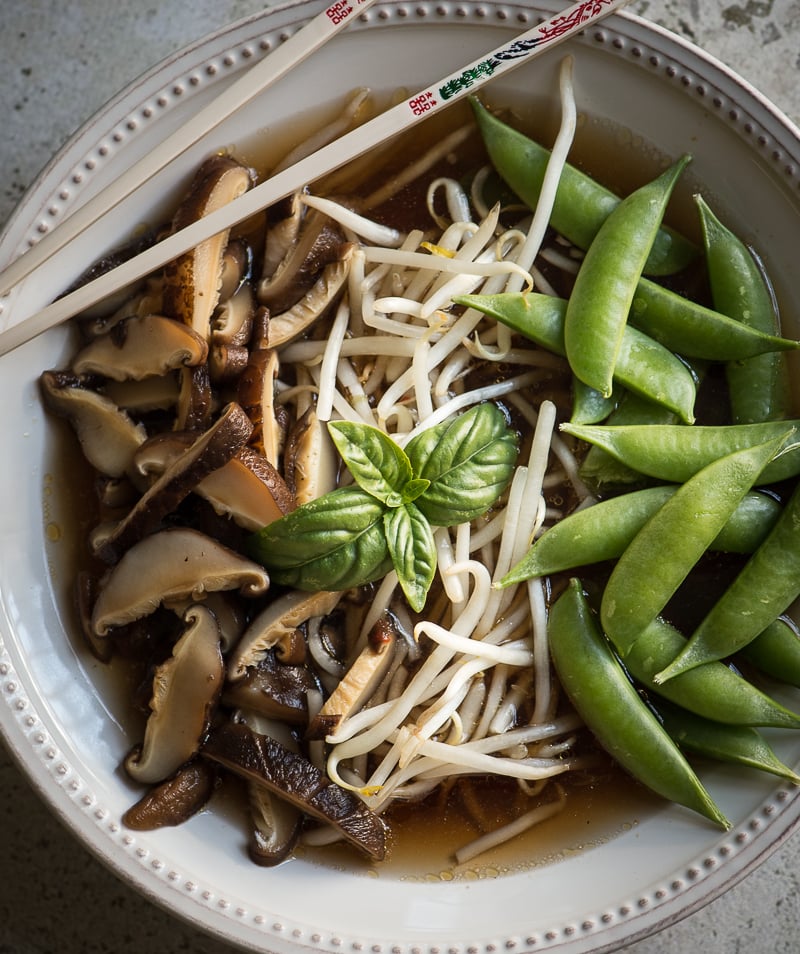 I can always count on Susan for beyond inspiring raw food fare, and this raw Pho is no exception. 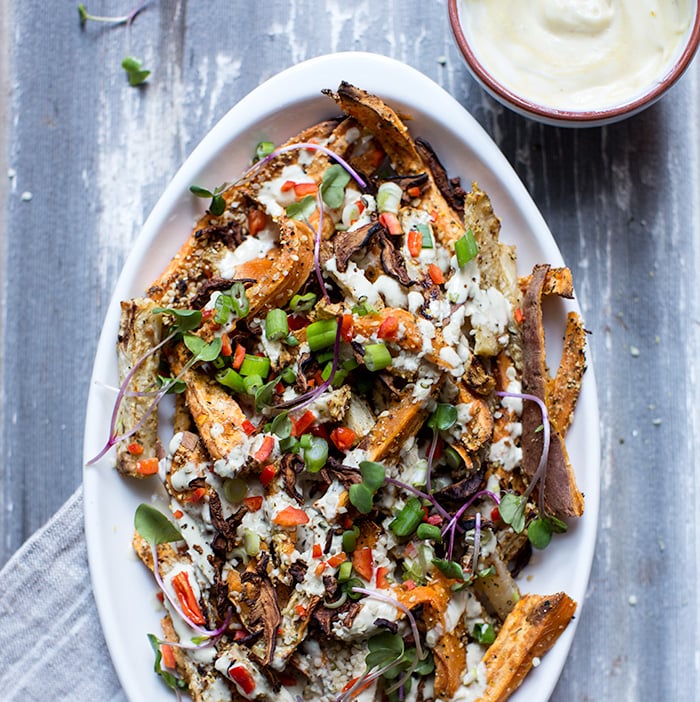 I will clearly have to make this insane-looking platter of sweet potato fries with tahini and shitake bacon. But when I do, I’ll have to be prepared to eat it all in one sitting, because holy yum.

2. A nice op-ed from Danielle Ofri, a physician, who tries to address some of the disjunctions between the way patients and their doctors approach chronic illness. In her example, a diabetic patient stops taking insulin, in spite of an understanding of his condition and a recognition that his blood sugar is climbing. Ofri struggles to find ways to impart her alarm while also respecting the reasons why treatment has not felt like a priority to her patient.

3. I enjoyed these six questions with Leslie Jamieson, who has written a new essay collection focused on empathy. The interview also brought me to Paul Bloom’s New Yorker piece on empathy, which I sort of scanned when it originally came out, but failed to read with the sort of attention it deserved. It’s an interesting argument, the crux of which is that the kind of intimate identification on which empathy rests can actually be a double-edged sword, directing our attention primarily to scenarios that strike a chord, and therefore diverting us from catastrophes or situations that stir up less immediate recognition, but are no less urgent. Jamieson addresses these potential hazards, but when asked, “Do you think your book offers a defense of empathy? Does it find anything dangerous or troubling about empathy?” she replies:

Yes, and yes, and yes. All three. I’m interested in everything that might be flawed or messy about empathy — how imagining other lives can constitute a kind of tyranny, or artificially absolve our sense of guilt or responsibility; how feeling empathy can make us feel we’ve done something good when we actually haven’t. Zizek talks about how “feeling good” has become a kind of commodity we purchase for ourselves when we buy socially responsible products; there’s some version of this inoculation logic — or danger — that’s possible with empathy as well: we start to like the feeling of feeling bad for others; it can make us feel good about ourselves. So there’s a lot of danger attached to empathy: it might be self-serving or self-absorbed; it might lead our moral reasoning astray, or supplant moral reasoning entirely. (See this fantastic piece by Paul Bloom in The New Yorker.) But do I want to defend it, despite acknowledging this mess? More like: I want to defend it by acknowledging this mess. Saying: Yes. Of course. But yet. Anyway.

4. Thanks to Ali for directing me to this article, entitled “How to Hold an Unpopular Opinion.” I think the author’s advice, summed up in seven useful talking points, is tremendously useful for activists, not to mention anyone who holds a passionate opinion that lies outside of mainstream thought. I especially enjoyed tips 5, 6, and 7: understand the counterarguments, hold opinions humbly (so important!), and present your case boldly.

5. I’ve really been enjoying a series from the Guardian entitled “My Hero,” in which notable writers discuss some of their heroes (literary, artistic, political) in short essays. Three in particular have captivated me this week. First, Nell Freudenberger on Alice Munro:

I don’t think Alice Munro would care to be called my hero, or anyone’s. And yet she is the writer whose female characters I feel the most kinship with. Whether she is a feminist writer or not, Munro has said: “I never think about being a feminist writer, but of course I wouldn’t know. I don’t see things all put together that way.”

No fiction writer sees things “all put together”, and a fiction that intended to do something in the world, such as raise consciousness, wouldn’t in one sense be fiction at all…I recently reread Munro’s work in order to write about her new book, Dear Life, and for the first time I recognised what makes me feel so much at home in her world. Munro’s mother, as she appears in the author’s work, escapes a desperately poor and unhappy childhood; she is bright and bookish, but often an embarrassment to her daughter, especially in the way she calls attention to herself. In the brilliant title story, Munro remembers a time “when I was at the stage of hating a good many things she said”. Everyone must go through this stage with their parents, but the final, unflinching revelation of Dear Life, which I won’t spoil, shows the everlasting regret that can follow a failure of empathy inside a family. Which is, of course, one thing that fiction can do in the world.

Ephron was not a canonical feminist icon, a Susan Sontag or a Saint Simone; she was too funny, too commercial, too successful. But she was an icon of feminism-lite, someone who brought intelligence and wit to the daily tasks of being a woman. One of her best pieces was a hilarious essay on “maintenance”, the daily labours women must devote to their bodies just to keep one step ahead of time. Ephron’s declaration that she had her hair blow-dried twice a week, “cheaper by far than psychoanalysis and far more uplifting”, ranks with Shirley Conran’s defence of the duvet in the 1970s as a liberating concept in housekeeping. Of course, Ephron wasn’t really frivolous. As she noted in the acknowledgments to I Feel Bad About My Neck, all the effort made very little difference: “I would like to thank all the people who have laboured hard to stop the forces of gravity … As a result I look approximately one year younger than I am.”

Fifty years on, we’ve come full circle, and the prospect of spending all day hanging with your kids and baking crumbles – why, actually being home when a delivery arrives from Amazon – would strike many women as the height of luxury. Work doesn’t always feel like a privilege…Most women work not from yearning for fulfillment, but yearning to pay the mortgage.

Yet it’s worth touching base with The Feminine Mystique, which reminds us not to idolise that bygone life of lie-ins, hairdressing appointments, and a husband who didn’t want you to worry your pretty head about that mortgage. Such leisure came at a price: a marriage that was in no way an equal partnership; lassitude, a sense of uselessness and triviality; boredom and the worry that the big events of life were somewhere else while you were replacing the bin liner. The Feminine Mystique goads me to gratitude that, thanks to forerunners like Betty Friedan, I’ve had the opportunity to pursue a career. And I can still bake a mean crumble.

I read The Feminine Mystique for the first time since college a few years ago, and I remember having similar thoughts. At the time, I had also read snippets of my Grandmother’s diary, which my mother found after she passed away. I was surprised to hear her describe feelings of domestic suffocation–feelings I’d never have ascribed to her, based upon my childhood and young adult memories. But then, as I recalled the enthusiasm with which she’d describe certain pursuits–anything from science to space travel to being a writer–my adult self could imagine that there had perhaps been a touch of wistfulness or longing in her voice. The Feminine Mystique may be an imperfect fit for our times, but in spite of the backlash and the irritation it stirs up among women today, I feel glad to live in a world in which it could be considered dated or irrelevant at all.

The series has a lot of non-feminist essays, too, I promise. Well worth checking out.

Finally, a bonus link: my friend Amanda, author of the blog Pickles n’ Honey, recently interviewed me for a new series she’s doing on her blog. The series will feature 10 questions with fellow bloggers. I was so delighted and honored to be Amanda’s first interviewee, and I also loved the thought-provoking, unusual questions she posed to me (if you had to choose a favorite and least favorite word, what would they be? What’s your idea of being unhappy?). Amanda’s blog is one of my favorite resources for vegan recipes, but I also love her honest, down-to-earth writing, and I can’t wait to see whom else she’ll chat with for this series. You can check out my Q&A here!